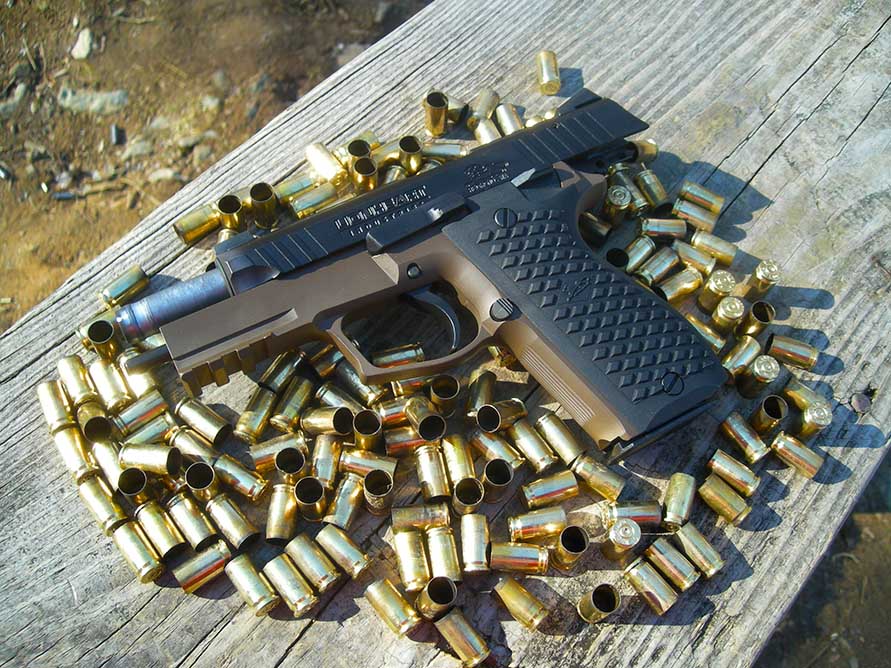 Steel and Cerakote go together like peanut butter and chocolate. (Photo by F. Borek)

It’s always nice to see a new gun company enter the shooting world. It’s also nice to see that company offer something a little different than its competitors. New companies often have to do a lot in order to make a dent against the large number of companies already entrenched in the shooting world and those who already have legions of die-hard fans. Luckily for Lionheart Industries what is old is new again, and that is its LH9N Mk. II 9mm pistol.

Although I had heard of the LH9 series of pistols before, it was only recently that I had ever seen one in person. Sitting in the used case of my local firearms emporium was an LH9N Mk. II on consignment for $469. It amazed me to see that it appeared unfired and that it came with four magazines and the case. Seeing as I was getting a brand new handgun for $300 off the MSRP, I picked it up.

From Daewoo to Lionheart

Lionheart Industries, which opened its doors in 2011, imports the LH9 series pistols from South Korea. S&T Motiv, formerly known as S&T Daewoo and before that Daewoo Precision Industries, now manufactures the guns. Daewoo was once a massive chaebol (conglomerate). However, unlike some massive American companies which concentrate on one product or related products, chaebols will own many different and often autonomous subsidiaries.

Daewoo was no exception, owning companies that produced automobiles, ships, construction equipment, electronics, buses, heavy weapons, small arms and textiles. For the American shooter, Daewoo is most famous for the DP-51 9mm pistol and the K2 rifle. The DP-51 was the K5 pistol and is the current service pistol for the South Korean military. The K2 rifle is a combination of both the AKM and M16 rifles and is the service rifle for South Koreans. Both the DP-51 and K2 rifles won many fans in the U.S. for their reliability and lower price point.

Unfortunately, Daewoo collapsed in 1999 under a mountain of debt as they owned 289 companies and Asia suffered a financial crisis. This meant that while the subsidies of Daewoo were sold off and reorganized, importation of the ‘Woo guns sadly ceased.

An investment group, S&T, bought Daewoo Precision Industries and renamed the company S&T Daewoo. Then renamed it to S&T Motiv, which continues to produce the K2 rifle and K5 pistol amongst other designs. I do not know if S&T Motiv ever intended to export the K5 pistol to the States, but Lionheart became the sole importer of new K5 pistols as the LH9 series.

The serrated slide is a nice touch. (Photo by F. Borek)

The LH9 pistols feature a forged steel slide with a matte blue finish. The top of the slide features “wavy” serrations to cut down on glare and remind me of the serrations the top of the receiver of a Remington Model 11. It’s a nice touch that shows good workmanship. There are large cocking serrations at the front and rear of the slide. The barrel is forged from 4150 chromoly steel — the same kind of material used in nice AR-15 barrels. It also sports an “MP” stamp, meaning it has been magnetic particle tested. Again, this is a nice touch that shows the level of quality and workmanship that goes into these pistols.

The frame is made of forged 7075-T6 aluminum, which is also used in AR-15 receivers, and the frame has a Cerakote finish that’s available in both black and flat dark earth. The black plastic grips are very different than most pistol grips. While many grips prefer traditional checkering or stippling on their grips, the LH9 grips are large diamonds.

The LH9N Mk. II variant is the top tier of the LH9 family and features an accessory rail and Novak sights. The LH9 series comes in both full-size and compact versions, with variants that have standard 3-dot or Novak sights and come with or without accessory rails. Currently they only come in 9mm, but Lionheart is developing .40 S&W and .45 ACP variants. The pistol comes with a 13-round flush fitting magazine and a 15-round magazine with extended baseplates. If you have them, or can find them cheaply, the LH9 family will take Smith & Wesson 59 series of magazines. Compared to the older DP-51 pistols that were imported, the LH9N Mk. II is a modernized upgrade of the old warhorse.

The LH9N Mk. II takes a lot of inspiration from the Smith & Wesson autoloader family and uses nearly the same recoil operated action. The grip angle and style, however, is thicker and slightly more angled like the Walther P-38/P-1 family. Size wise, the pistol is smaller than a full-size 1911, and a good size for concealing.

The safety, which disconnects the trigger when put on safe, is small and might take some getting used to, but the small size of the safety also prevents snagging and makes it easier to draw while carrying. Unlike the slide mounted safety on Smith’s semi-autos, the safety is on the frame, like the 1911 or Browning Hi-Power. The slide stop is easy enough to hit and the controls are in the right places. 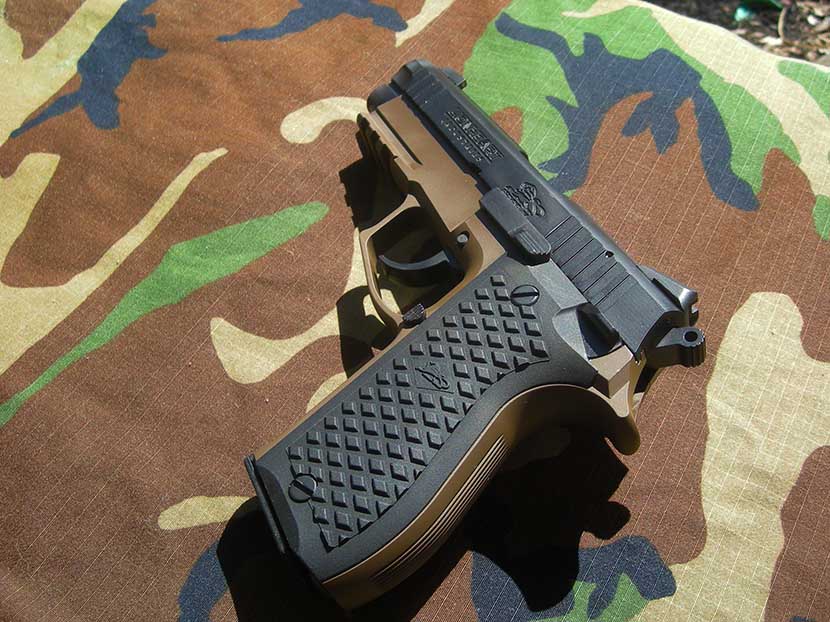 The LH9N’s grip are very aggressive (Photo by F. Borek)

The handgun has a double-action plus — or triple-action — trigger, something that’s also featured on the old DP-51 imports and the K5 service pistol.

When the hammer is cocked back, put the gun on safe and push the hammer forward. The hammer is now down and de-cocked, but the mainspring is still under tension. If needed, you can draw the pistol and give the trigger a light pull that re-cocks the hammer.

This is one of the most debated aspects of the pistol with supporters loving the idea of a double-action pistol with the light trigger of a single-action pull. Detractors will call it an accident waiting to happen, whilst extolling the virtues of their polymer guns. I find the trigger to be an advantage honestly. I like that easy double-action pull and I know that, contrary to what the detractors say, you can also use your thumb to pull back the hammer and not pull the trigger.

For people used to Smith & Wesson pistols, Hi-Powers and M1911s, disassembly is fairly easy and straightforward. Safety check the pistol. Retract the slide until the cut in the slide is aligned with the slide stop pin and push out the slide stop from the other side. This may be a little tricky as the trigger bar might get in the way, but once the slide stop is out, pull the slide forward and off of the frame. Compress the recoil spring and remove. Then lift the barrel out of the slide. Unlike on Smiths and 1911s, there is no removable barrel bushing.

The LH9 Mk. II is a solid handgun and the slide is extremely smooth to rack. The grips are wide and thick and fit my hands well, though they are a little short with the 13-round magazine. Luckily the extended base plate on the 15-round mag solves that issue.

When shooting, the pistol has enough weight to make the recoil negligible. The trigger in single-action has a short take up and is crisp, but not too light. The gun is accurate, as long as you do your part. I’m not the world’s best handgun shooter, but I can hit where I’m aiming at 10 yards with the LH9 Mk II. The test target features a much better bench rest group at 15 yards and check boxes for the various models, including the LH40 and LH45 models not yet in production. Meaning a 40 S&W or 45 ACP model may be available in the near future. 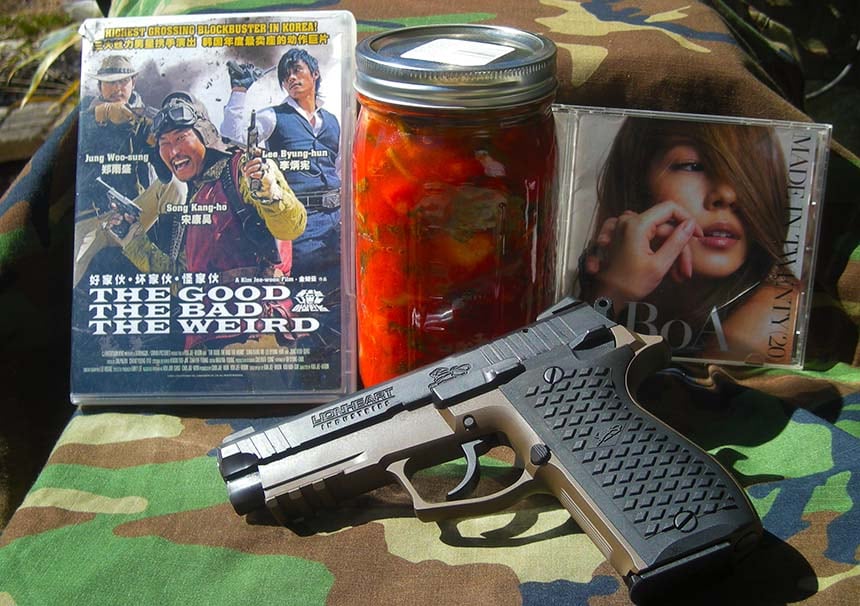 The only thing missing is Jeju chocolate. (Photo by F. Borek)

Lionheart has made a great effort to get the shooting public to notice them. They have certainly made a splash with a high quality handgun and they made a great choice with the K5 pistol.

The LH9N Mk. II is Lionheart’s top-tier offering with MSRP at $769 and I think it’s worth every penny. The quality and workmanship is what you would expect from more established companies, except Lionheart’s cost around $300 less.

The LH9N Mk. II pistol is a great handgun for novice and veteran shooters and can be comfortably used as a carry pistol, fun gun or home defense. The looks of the pistol should appeal to everyone, but tactical minded shooters should take note of the accessory rail and Novak sights. Lionheart also sells fiber optic and tritium night sights for the LH9N Mk II on its website. The only thing missing, for me, is the option of having wood grips or rubber grips for the pistol.

As more LH9N Mk. II are produced, I think they’ll prove to be a worthy challenger to the legions of polymer handguns. The K5 service pistol provided 25 years of reliable service to the South Korean military and Lionheart made a great decision to bring back the DP-51 and modernize it. There is even a bit of hope that one day Lionheart will bring back the K2 rifle, as they’ll occasionally hint at it if you ask them very politely on Facebook.