The Beguiling Elegance of the SIG P250

I probably had the very same reaction to SIG’s new design: that’s funny, it doesn’t look like a SIG.  It hints at SIG designs, with the flanged slide and full-height rear serrations.  But that’s it, really.

The dust cover, the grip shape, the beavertail, and the missing hammer spur all stand out for not looking like anything else SIG.

So, I’ve spun around completely; I’m totally fascinated by it now. 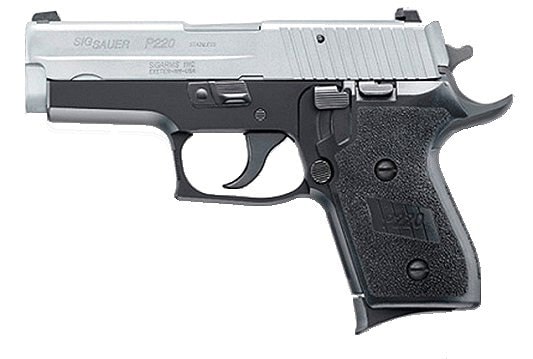 A lot of folks like to paint the P250 with the novelty firearm’s brush, because you can switch out the fire control unit and throw it into any other P250 kit so if you’re indecisive you can change it from a full-size 9mm to a sub-compact .45 and every other permutation in between. 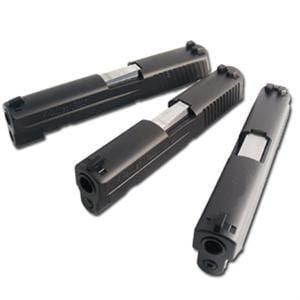 But that can’t be the case; when I look at the design of the P250 the modularity seems after-the-fact.

Examining the way the parts are cut and shaped, how simple and elegant the internals operate, I can only conclude that Adrian Thomele, Thomas Metzger, Michael Mayerl, Ethan Lessard, the gun’s designers, wanted first to completely rethink how a firearm should be constructed, and rather, how those changes went on to precipitate all of its other features. 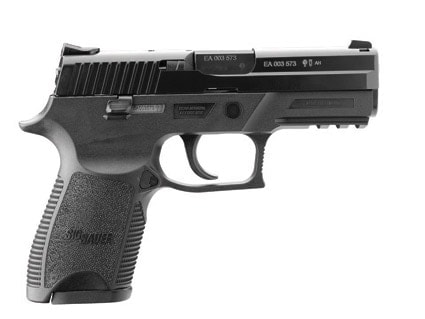 Don’t get me wrong, I think the modularity is a good thing—if not a feature every shooter wants, certainly it’s not one that detracts from the gun.

That is to say, if you’re never going to swap frame sizes or calibers, the potential to do so doesn’t impede on the gun’s function or form; you don’t gain anything, but you don’t give anything up.  I just believe that feature was dreamed up by a marketing department, interchangeable grip sizes aside. 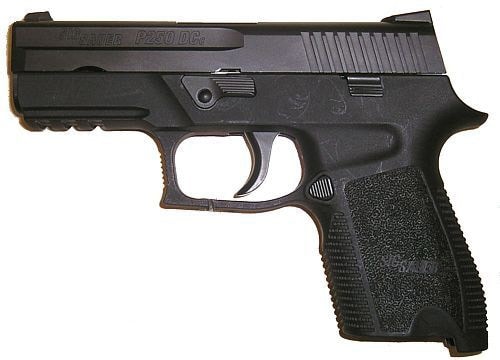 The gun’s frame, slide release, sear, and trigger bar are all stamped steel.  The trigger and hammer are molded.  Besides the pins (there’s three) and springs (there’s four) that’s it; that’s the whole of the fire control group.

The rails and the frame are the same piece of metal, as opposed to the rails being molded into the grip, meaning any of the flexing that the grip goes through cannot affect the slide/ frame/ barrel lockup.

The grip literally hangs off the frame.  A simpler design hasn’t been produced since 1947.  There’s more complexity in a modern revolver. 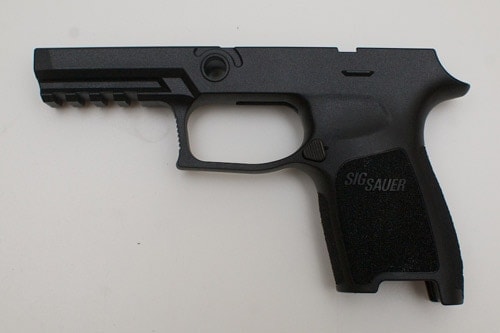 All of this contributes to it’s stageless, long, smooth trigger.  There just isn’t anything there to complicate its action.  It’s not novelty, it’s revolution. 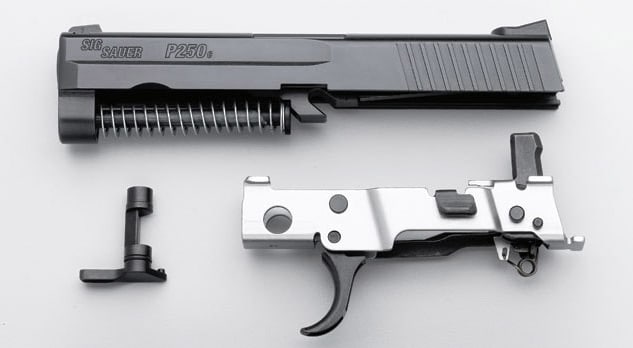 Of course, it’s also outmoded.  In a real sense, the double-action-only has been passed over for decades.  If the SIG P250 came out thirty, or even twenty years ago, then it would, without a doubt, be as iconic as Glock; it would have been the modern firearm that replaced the anachronistic revolver.  Add the capacity and size benefits of an automatic and it would have reigned king.

But it’s not 1985 and all sorts of innovations have come to bear and been proven reliable and effective: safe-action, double-action/ single-action, striker-fired, DAK, LEM—just a few of the time-proven primer bashing systems. 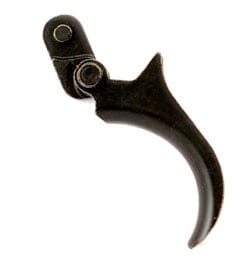 None of these, however, hold a candle to the simplicity of this new design.  The P250 is a firearm that anyone can detail-strip with no special tools, look at the parts and completely understand how it works, and in doing so, fully appreciate it.

It teethed a bit.  People hawked on its unreliability.  It doesn’t feed, it doesn’t extract, the slide doesn’t lock back, it doesn’t load completely…

These are real problems and SIG has done nothing to conceal them, not that you could what with the Internet and all, but they have gone on to fixing them.  The P250’s problems have mostly come down to springs that weren’t to specification.  The trigger bar has been modified since its first release, as has the slide release lever and extractor. 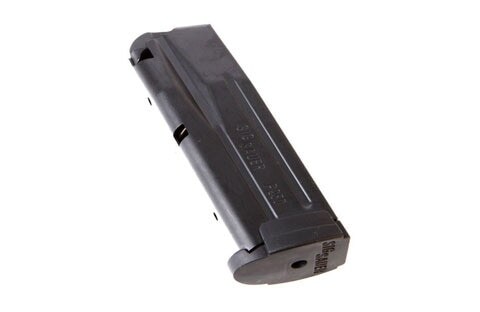 The magazines have been redesigned with different floorplates springs, and there have been a few different recoil springs and guide rods, both coiled and flat, steel and polymer.  This is SIG we’re talking about.  They’re as likely to change those from month to month as Taurus is to release another Judge. 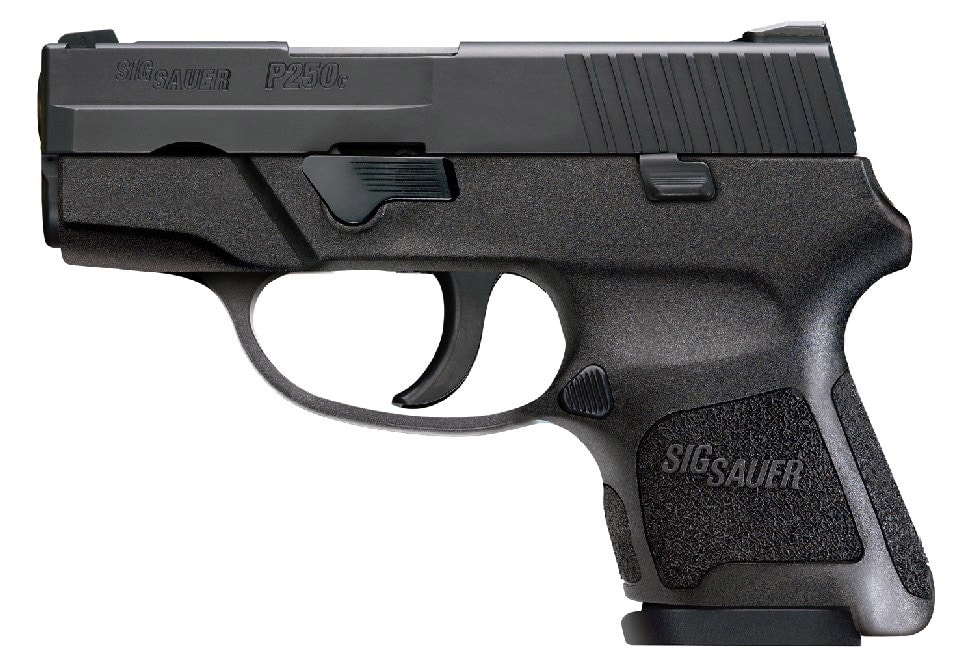 None of the problems speaks to the fundamental reliability of the pistol, and recent endorsements have reflected the tweaks and fixes, with Holland and the U.S. Federal Air Marshals adopting the P250 as their primary handgun, among others LEO agencies around the world.  SIG is selling so many of them to agencies that civilian availability is spotty right now. 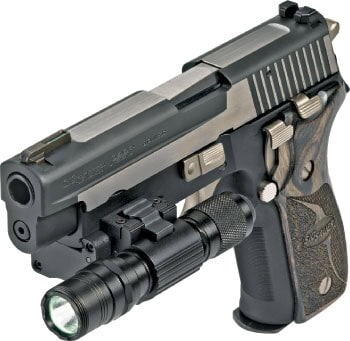 A lot of people won’t ever really spend time thinking about this gun because of what it is on the surface.

It’s double-action-only, it’s polymer, it’s unproven, it’s a gimmick, it’s ugly–it’s not a real SIG.  And the fact is that no gun is all things for everyone, no matter how many calibers it’s available in, no matter how many different grips and slides.

But truthfully, this is a marvel of a firearm, and its elegance, simplicity in design and function, is admirable.

Now someone get to making some damn aftermarket sights for it already.