For Browning aficionados, I’m probably a heretic, but truth be known, I never really liked or enjoyed shooting the venerable A5 autoloader shotgun that was around for nearly a century. It just never fit right.  I thought the recoil was excessive, and after a couple of rounds at the trap or skeet range, it left my cheekbone sore to the touch.

So, when Browning announced that they were going to discontinue the A5, and replace it with the Gold Hunter (1995), I wasn’t real disappointed with the news. Oh sure, as the Senior Editor at Petersen’s Hunting Magazine, I had advance warning about the cessation of production on the A5, and promptly bought two guns to put away into my collection. I was also one of the first to ask the Browning folks to put me on their “tester list,” as soon as the Gold Hunter was available.

After testing the Gold Hunter on the range, and in the field…. It sported all the attributes that I liked in an autoloader. It swallowed 2 ¾, and 3-inch shells—target to magnum loads like it didn’t care what you fed it, and ammo was cheap.

As you might guess, the shotgun never went back to Browning, and has been my #1 shotgun for everything from clay targets and dove, to upland birds, small game and all waterfowl adventures.

Since 1995, I wondered how could any gun maker could improve upon near perfect perfection.  Thousands of rounds on the range and in the field, with blowing dust in the deserts, mud in the fields chasing turkeys, rain/snow in the blinds for ducks and geese, saltwater, and even pounds of blowing vegetation… and never a jam, misfire or a hiccup!

Enter the Browning Maxus that was introduced to the outdoor Press at the SHOT Show in 2009 and finally became available in numbers to the sportsmen in the fall of that year. Smaller, lighter, looking different, having a host of new tech features, and with a synthetic stock for the hunter that would not be easily scratched, I was still skeptical.

So skeptical about this “new high-tech shotgun,” that I actually avoided asking Browning if I could test the Maxus in some rapid-fire field conditions until an opportunity presented itself to do a late spring snow goose hunt here in Colorado with Mike Adams from Webbed Feet Down Outfitters.  To compound my quandary, Steve McGrath from Camp Chef Outdoor Products was invited to join my Kathy and I for the hunt. And guess what? He was planning on shooting his Maxus and thought it was the best thing since sliced bread.

As I said earlier, the Maxus would have to really be something special for Kat and I to abandon our Browning Gold shotguns and take a quantum leap forward. Out of the box, the Maxus tips the scale at a light, 6 pounds and 14 ounces. It’s slim, trim and assembles in seconds. With a choice of 26 or 28 inch vent ribbed barrels in either 3 or 3 ½ inch chambers, it looks like Browning has covered the basics in offering a host of models to cover a lot of shooting needs.

Thrown up to your shoulder, and readied to fire—the Maxus feels like you are pointing a broomstick, instead of a heavy shotgun. The balance is centered perfectly, and unlike other guns, it is not barrel heavy.

Our “tester” was a 3-inch model, with a 26-inch Vent Ribbed barrel, with a Mossy Oak Duck Blind camo pattern synthetic stock, and a Dura-touch armor coating that is supposed to literally, thrive on neglect when used in the field.

As always, Browning includes three chokes with its guns—Improved Cylinder, Modified and Full. It’s a unique “Invector-Plus/Choke” system that screws in and out of the barrel, either with their tool… or you can use a Quarter.  From a techie standpoint, it’s a combination of chokes and the way the barrel is bored to that allow for a longer forcing cone. In plain English, it means that lead or steel shot is forced down the barrel in a gentler fashion, so there is less deforming of the shot—and it means that the patterns stay together better.

Into the snow goose field, and as we started blasting and dropping birds from 20-40 yards, the Maxus cycled shot shells faster than anything I have ever shot previously. If you are used to many other conventional shotguns, it may actually take a little “re-learning” when you pull the trigger.

We shot a variety of ammo on our hunt, including Winchester’s new Blind Side, which in some shotguns can provide a little extra kick.  In the Maxus, with its port-and-piston design that has ports that seem to bleed off excess gases with heavy loads, both Kat and I felt like we were shooting light/dove or an upland game bird load. 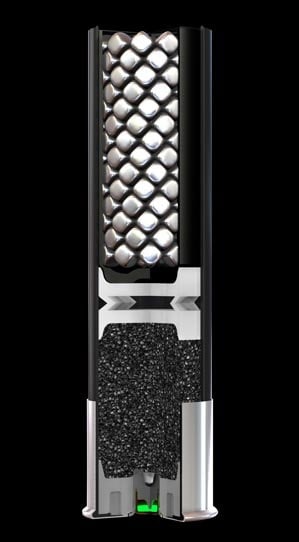 The only feature that we found lacking was the Browning’s “Lightning Trigger System.” In spite of cleaning the shotgun, cleaning out the packing grease and lubing it well, the trigger continued to have a “sloppy creep” factor, loose to the touch even.

Add in all the new features found in the Maxus—the Power Drive System, back boring of the barrels, and a real skinny but effective space-age recoil pad, and Browning advertises that this combination has resulted in an 18 percent reduction in recoil. 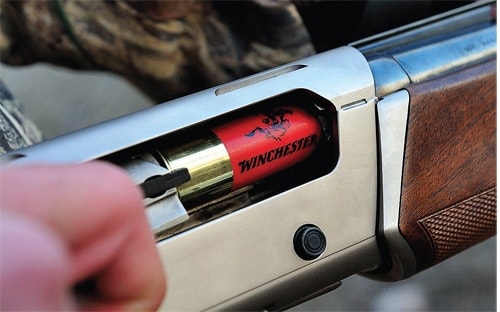 Without exception, everyone became an instant fan of the Maxus. High tech features, but not highly technical in order to be able to access and enjoy, the Browning Maxus with all its loading and shooting attributes. Some in our test group, said, it felt like a 20-gauge shotgun—lightweight, reduced recoil, fast recycling and dependability.

Sorry to all you Gold model fans, it looks like Browning is soon going to discontinue this model. And for 2011, only a 10 gauge model is now being offered.  For the rest of us, I guess my Gold Hunter is going into the gun vault with the old A5s to one day become a collector’s gun.

And as before, some 13 years ago with the Gold Hunter, this Browning Maxus I have tested, is not going back to the manufacturer.  Its one I am going to buy and is going to become my new target, upland and waterfowl favorite.