Duds, Squibs, Failures and Kabooms: What's What in Ammunition Safety

What is the rock bottom minimum that newbies must know about ammunition? In addition to the specifics for handgun and caliber, I also talk to trainees (and others new to firearms who ask) about risk.

You’ve probably acted in the role of informal firearms instructor and talked about firearms safety, but what I mean here is risk specific to ammunition choices. Managing risk is a part of being safe, and to manage it we must be aware of it.  When we talk to new shooters about this, it’s important that we don’t sensationalize risk; we don’t want them to abandon shooting sports or armed self-defense out of unreasonable fear. Here is how I recently approached it with a young lady, new to firearms, who came to me for instruction: 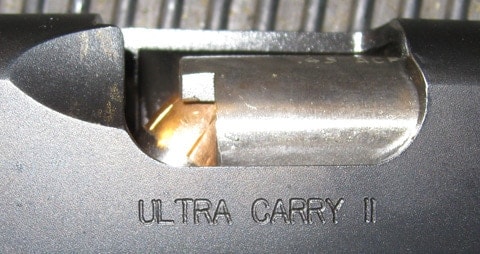 Compare shooting to the risks we take every day when driving our cars. When driving, there’s always the risk of a head-on collision (nothing more than a stripe of paint and agreed-upon rules protects us from this kind of mangly death), of being seriously injured or killed due to some other driver’s negligence, our own inattention or a mechanical failure. Yet we accept this risk, seldom thinking about it, even though more than 50,000 people die in car crashes every year in the US.

I say the same when I teach scuba diving. Diving is fun and safe when we obey the rules, but I emphasize that it is not without risk and every year people die while engaged in this activity. Same for mountain biking or anything else we enjoy. As in those pursuits, in shooting we accept some risk; and in all these activities we mitigate risk with knowledge and safe practices.

To understand risk associated with ammunition choices, it helps to understand what makes up a cartridge and how it works. 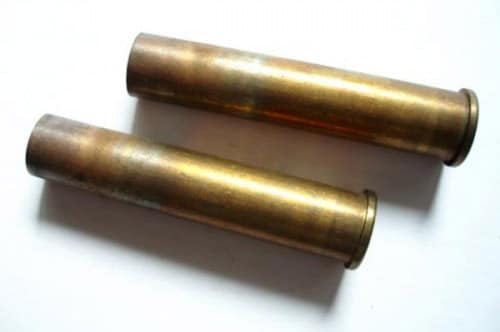 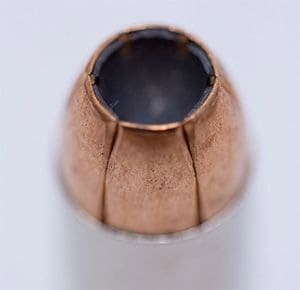 There are four components to a cartridge: the case, the primer, the powder charge and the bullet. The primer contains a chemical mixture sensitive to percussion; when struck by the firing pin, the primer’s chemical mixture detonates, creating a small but intense flame that ignites the powder charge. The expanding gases from the burning powder force the bullet from the case and propel it down the bore and out the muzzle – in your 9mm Luger, in the neighborhood of 1,000-1,300 feet per second. Gas pressure is around 30,000psi so, obviously, anything that obstructs the bullet’s passage out the bore is bad juju. 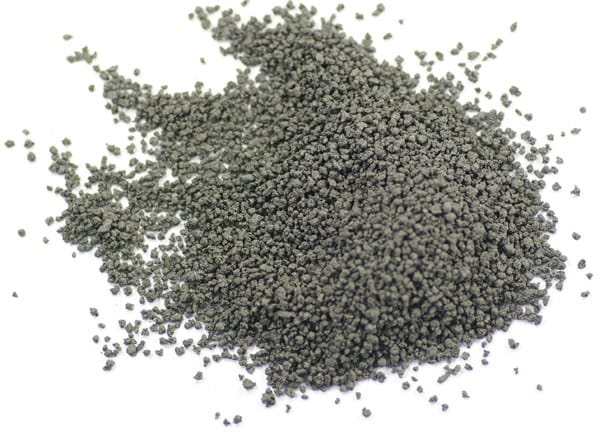 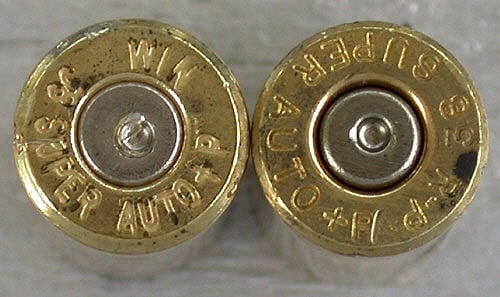 New “factory” ammo from big-name manufacturers (like Remington, Hornady, Winchester, etc.) undergoes scrupulous quality control protocols, and it’s rare that any individual cartridge comes off the line missing a powder charge or with a double powder charge in it.
In reloading, only the case is re-used; after cleaning, it gets a new primer, powder charge and bullet. Commercially reloaded (“remanufactured”) ammo is usually produced by smaller operations that may have less rigid quality control, so there may be an increased risk of a cartridge lacking a powder charge or having too much powder.  Those who reload their own ammo are more likely to commit such an error through lack of attention, so I recommend you never shoot someone else’s reloads in your pistol.

A cartridge missing its powder charge is called a “squib” load and the hazard is that, lacking a powder charge, the force of the primer’s explosion alone is enough to drive the bullet into the bore, but is not enough to drive it completely through the barrel and out the muzzle. The bullet lodges somewhere in the barrel while the semi-auto action of your pistol may (or may not) cycle to extract the empty case and chamber a fresh cartridge. If you’re extremely lucky, the squib load didn’t create enough energy to fully cycle your action, and so no new cartridge was chambered; you noticed the squib load and took appropriate safe action (below). 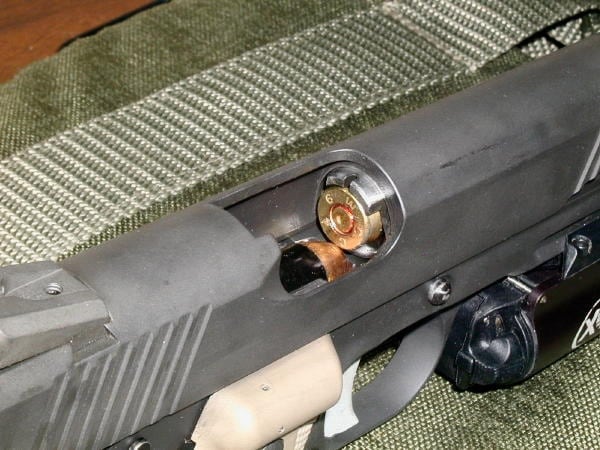 Or, if you’re extremely lucky, the bullet from the squib load moves forward so little that it prevents the next cartridge from chambering; the pistol “jams” and you end up field stripping your pistol and discover the problem. 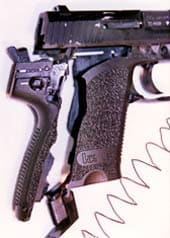 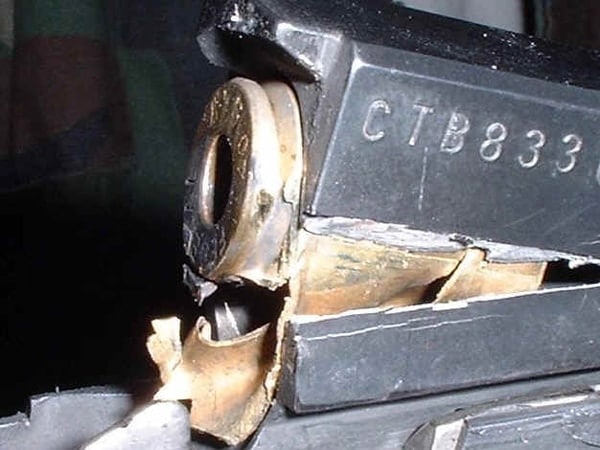 If you’re not extremely lucky and you fire the fresh cartridge with the previous bullet obstructing the bore, you could suffer a catastrophic failure of the pistol (a “kaboom” in shooter’s jargon) and you or a bystander could be seriously injured – or worse. That’s because, with the bore obstructed, that 30,000psi of gas pressure of the subsequent shot has nowhere to go except backward, driving the slide rearward with far greater force than it was intended to handle.

If you’re smart, you’re wearing your safety glasses and they will save your eyes when the gases and possible bullet/case fragments exit the ejection port, and if you’re lucky, the slide will stay on the pistol. If the volume of very high pressure expanding gases can’t exit the ejection port quickly enough, the only other place it can go is down into your pistol’s polymer frame, possibly causing it to suffer a catastrophic failure – in other words, go “kaboom” in your hands and sending gun parts & pieces flying in various directions. 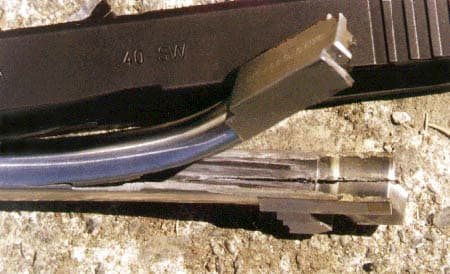 You can identify a squib load when it occurs because it will go “pop” instead of “bang;” that’s because you hear the primer detonate, but there is no powder to burn and create the usual loud bang and full recoil. The difference in sound is very noticeable. Also, the pistol will not recoil or it may recoil far less than usual – you may notice that the slide barely moved or moved much slower, with a kind of “clunk-clunk” sensation.

Shooters get into trouble here either by ignoring these warning signs, or because they are engaged in rapid-fire and fail to stop themselves in time from firing the subsequent shot. When in doubt, don’t shoot.

The proper procedure with a squib load (if you did not fire a subsequent round into the obstructed bore) is to field strip your pistol and drive the bullet out of the bore from the chamber end with a cleaning rod. You can reassemble the pistol and continue firing.
If you did fire a subsequent round into the obstructed bore, count yer fingers and then, if it’s still in one piece, take your pistol to a gunsmith for a damage/safety check before shooting another round in it. 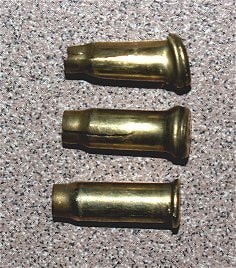 A cartridge with a double powder charge might or might not result in a kaboom, but you will certainly notice the difference between it and a properly loaded cartridge when it lights off – there’s a whole lot more bang and recoil! It’s possible (and likely) that the pistol could suffer some damage from firing a double-charged cartridge; since you’re new to guns and shooting, if you think this has happened to you, have a gunsmith inspect your pistol before firing another round in it. Save the suspect cartridge case to send with the pistol, if you can.

Kabooms are rare, compared to the numbers of firearms out there, and they often occur as a result of inattention, complacency or lack of knowledge. Stay alert and aware, make good choices, and you’ve eliminated nearly all the risk.