During the early stages of World War Two, well before the United States was attacked at Pearl Harbor, England was, for the most part, fighting alone for her very existence. The British Ministry of Defense, however, did purchase large quantities of American Tommy Guns.

Those weapons went on to equip thousands of British Army troops. They were quite expensive, however, so in 1941, just prior to our official involvement in the war, the British switched to the Sten Gun. 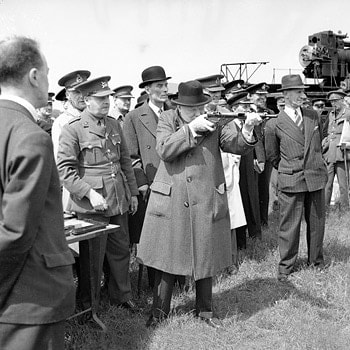 It was made by Enfield, the very same company which went on to produce world-class motorcycles. The name of Sten was derived from the first letters of the last names of its designers, R.V. Shepherd and Harold John Turpin, as well as the Enfield Royal Small Arms Factory, which obviously played a major role in its development and manufacture. 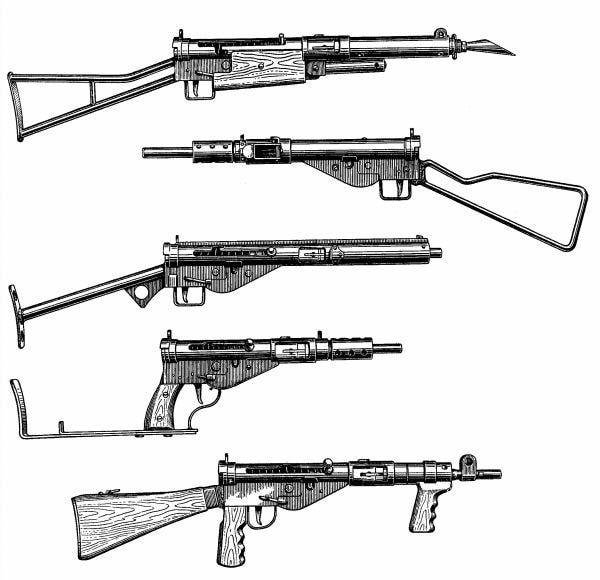 Amongst the line of models for the weapon, was the Mark 2 Sten Gun. It was by far the most popular model, with an enormous, relatively speaking, bolt inside its tubular frame. The barrel was affixed to the front of the casing, with the magazine fixed to the left side, where it could easily be supported by the shooter’s forearm. It was a compact, fully-automatic weapon, which fired 9mm pistol ammunition. It was designed primarily for close-quarter combat and short-range assault applications.

Due to a tendency of jamming at the most inopportune of times, however, it was not necessarily the most loved weapon of the war, but it was relatively inexpensive to manufacture, easy to maintain and clean, and had a seemingly endless supply of spare parts. It could be rapidly dismantled into its various component parts for ease of concealment with resistance groups, and they were therefore made available across all of Europe. Aside from the 9mm Parabellum pistol rounds, the weapon utilized a selective fire blowback system, with a length of thirty inches, and a weight of six pounds, eight ounces. The actual barrel length was seven and three-quarter inches, and had either two or six grooves, with a right-hand twist. The rate of fire was right at the 550 rounds-per-minute mark, and the muzzle velocity was 1,250 feet-per-second. 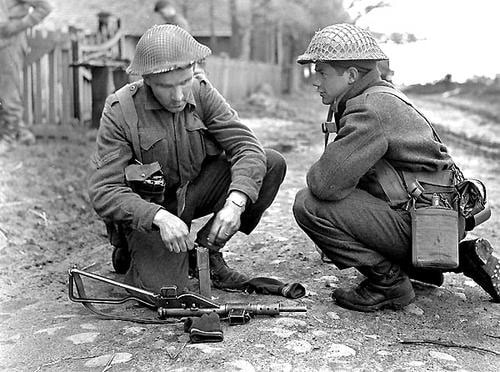 Those 9mm Parabellum rounds, by the way, carried 115 grains of powder. The magazines carried 32 rounds, but most front-line troops carried just 30, as the extra two rounds added stress to the spring mechanism. That horizontal magazine allowed for controlled firing, even from the prone position. Sights were fixed at 100 meters, and it could not be adjusted down to zero. The entire mechanism was the height of simplicity, as it was little more than a large bolt with a spring, and the very basics with the fire-selector and the trigger. 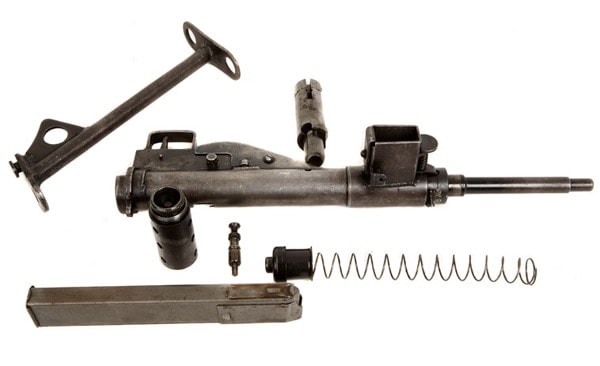 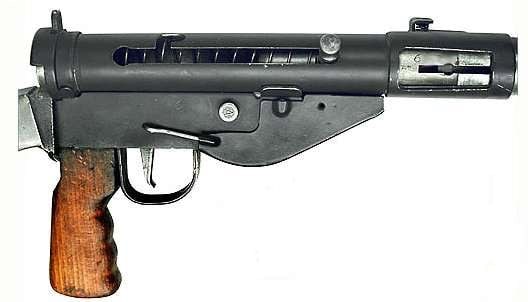 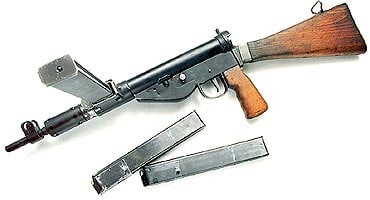 During the Korean War, The Communist Chinese utilized a copy of the Sten Gun, and, to the chagrin of our troops, it equipped every Chinese division. Prior to that, the Russian copied some of its design features, and ended up with their PPHS41 sub-machine gun. In size, it was slightly larger and heavier than the Sten, but the blowback system was suspiciously similar.

Do you remember that awesome movie entitled A Bridge Too Far? It stared a number of well known actors back in 1977 when it was produced. Amongst the group of actors, were Sean Connery, Michael Caine, James Caan, Gene Hackman, Robert Redford, Lawrence Olivier and a whole host of others.

It re-told the true events of Operation Market Garden, the retaking of vital bridges just prior to the D-Day invasion. Well, in the movie, there are several notable scenes with Caine and Connery fielding the Mark 2 Sten Gun. If you haven’t seen the film, it’s worth taking a look, as some of the combat footage is pretty darn realistic. I’m still trying to find someone who actually owns one of these weapons, as I would like nothing better than to use up one of those spare ammunition containers housing the hundreds of 9mm rounds I have waiting in storage.