Colonel Thompson's Submachine Gun and How it Changed the World

A submachine gun combines automatic firepower with the portability of a stocked, heavy calibre pistol.

In the later years of WW I, Colonel John T. Thompson addressed the very real armament requirement of a weapon designed to decimate grouped soldiers to secure ground quickly. Clear a trench by sweeping the ‘Tommy Gun’ from side to side and the soldier’s nickname for the gun, the Trench Broom, was coined.

Before Thompson any machine gun was heavy and only handled by a fire team so, accordingly, Thompson’s biggest design problem was weight.  He solved the weight dilemma the same way as most gun designers do today: a simpler design. The first machine gun ever was designed by American-born, British inventor Sir Hiram Maxim in 1884 in London and his gun was the ‘gold standard’ up until the Thompson.

Thompson developed a quality submachine gun that was 75% lighter than the Maxim.  In terms of portability, the Thompson stood unrivalled for the time period. 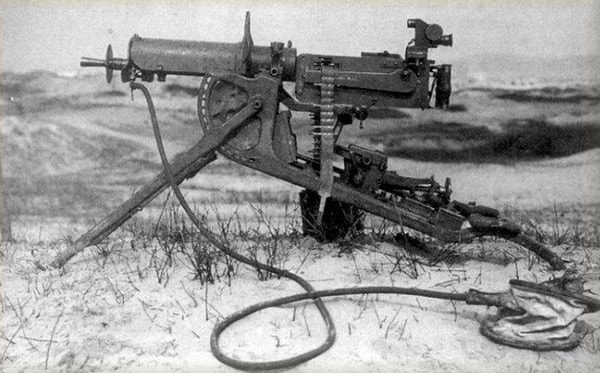 As an ordinance, the personally transportable machine gun provided exceptional firepower (on par with the Maxim considering the maneuverability of the Tommy Gun) and was light enough, 4 kilos (9 lbs.), for an individual shooter to fire comprehensively in battle.  As a philosophy, the weapon was developed to make warfare mobile, transforming it from the static trench bloodbath of the Great War to the ambush, hit-and-go combat scenarios of WWII and beyond.

Ironically, Thompson was initially working toward what we know as a semi-automatic to replace the bolt action M 1930 Springfield issued in 1905. He ended up with a far superior weapon—and then the war was over. 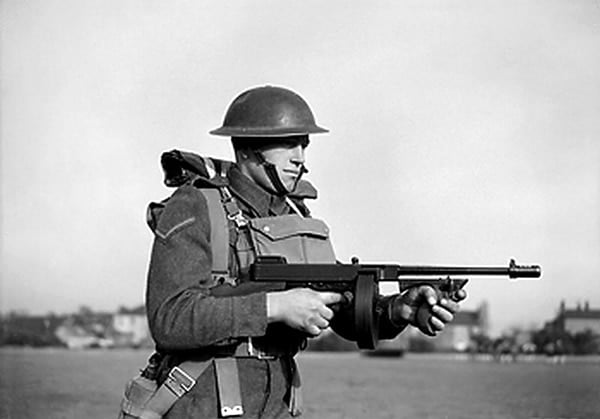 What the hell good was a close range portable man killer in peace time?  Ask any turn of the century gangster running liquor as The Volstead Act and prohibition kicked into full swing.  Indeed, no self respecting rum runner would be caught dead without his Chicago Typewriter (lest they be dead). 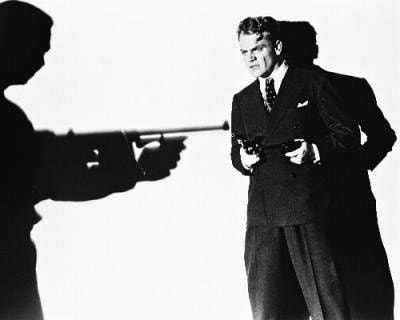 And it was in this role—one that underlined the incomparable might of the Prohibition-era underworld—that Thompson’s submachine gun became cemented into America’s iconography.

The Thompson machine gun caught the imagination of the US public as it was portrayed constantly in newsreels of the 1920s and movies of the 1930s, perpetuating an outlaw folk hero archetype that unavoidably fed into the prohibition fuelled violence of the day. 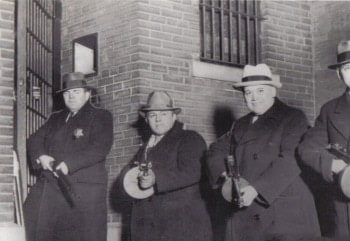 But soon enough, the power of the weapon was realized on both sides of the law and an odd market niche drove Thompson sales as the gangsters armed themselves. To combat the gangsters the Feds needed Tommy Guns as well. In the later part of the last century law enforcement underwent an upgrade to Glocks for the very same reasons.

There were 3 versions of the first models.

The 21 Thompson was finished, similar to a high grade hunting rifle produced for the FBI and the lawman of the decade, Elliot Ness.  With this model, Tommy Guns gained white-hat notoriety as the fixture of front page news, with cops posing with the guns after speakeasy raids despite the fact Prohibition was by this time proving unenforceable.

The upgraded 28 Thompson was simplified for field use and easier maintenance. It was used by the US Navy and the Army.  Both the 21 Thompson and the 28 Thompson could house the 50 round drum magazine or clips that characterized the weapon.

The M1 Thompson was strictly bare bones and accommodated clips only to rationalize costs so this submachine gun had broader issue to many more Soldiers and Marines in WW II and Korea and served well in all US theatres of war. All versions use the .45 ACP cartridge. 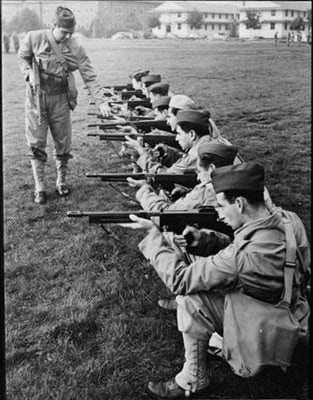 For the mobsters this was simply the price of doing business and all they had was cash, but if you were law enforcement, other than Elliott Ness (who was a Fed so he doesn’t really count) $200 was a considerable sum to requisition from the Cook County Treasurer. 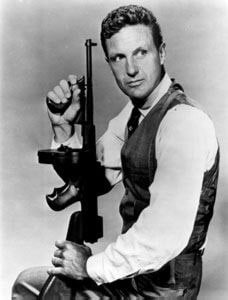 Eventually Prohibition ended, the America was wet again and the gangsters dried up but the Thompson still had one more unlikely devotee.  Through the 40s and 50s, mail robberies became a problem and—buttressed by heavy support in the United States Marine Corps who found Tommy Guns to be the ideal weapon for interventions in Cuba, Puerto Rico, the Caribbean and a number of Central American countries —the US Postal Inspection Service began outfitting all of its agents with choppers. 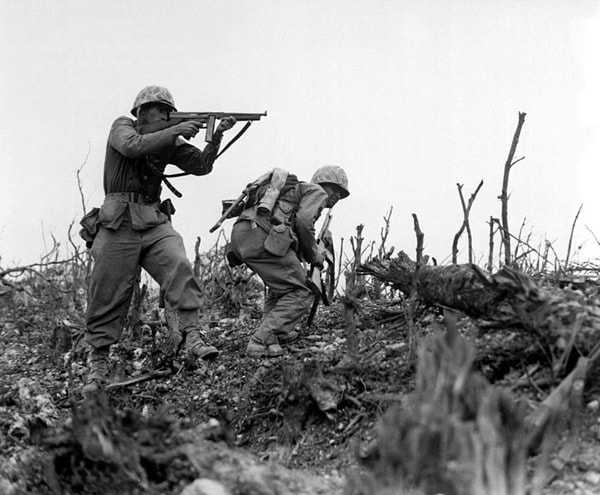 A number of US police departments acquired Thompsons including international police forces but the Tommy Gun was inevitably eclipsed by newer submachine guns and the .45 ACP was just not a powerful enough round.  It also should be noted that accuracy was never the guns strong suit and anything over 50 feet was random.

Better, lighter with more punch became the norm much the same as it is today and the Thompson took its place in gun history around the year 1947 (hint hint) as one of the most important steps in the development of modern arms.