Heizer Defense Bringing Back the Derringer for the 21st Century

So there’s this new pocket pistol that’s really more of a rumor and a photo and a fraction of a website and none of that matters we totally want to shoot it.  It’s a two-shot titanium-framed derringer with a super-flat profile and ported barrels.

Seriously, if this is a prank, things are going to get ugly. 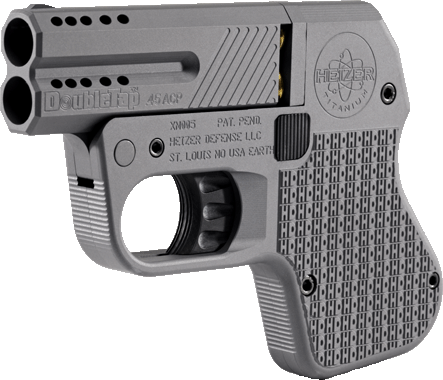 We really can’t tell you much more about it other than stuff you can figure out from that photo.  It’s a .45 ACP.  It has two barrels.  It looks to be double-action only.  The grip says HD over and over again.  Oh, right, we can say that the grip holds two more shots in there.  It’s called the Doubletap.

We don’t think it’s a rendering, because there’s a seam on the frame.  But that could mean it’s a mock-up handgun, but then again, you gotta get the guts in the gun somehow.

The barrels look to be about three inches long, compared to the bores, and those ports easily take up an inch of that. The big bore bullet is kinda a surprise; it must be pretty soft coming out of such a short barrel, but there is really great short-barrel revolver ammo that you’d think would be a better fit for a derringer. 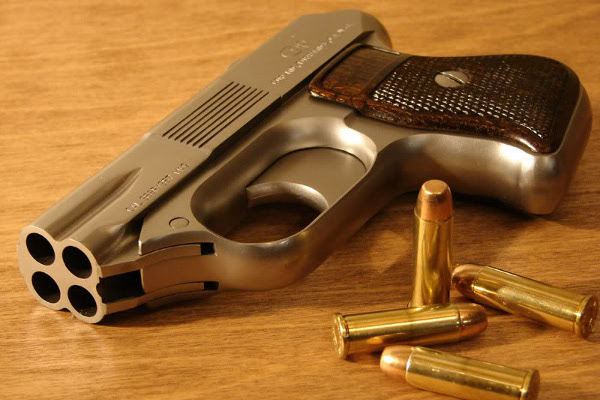 Anyway, it fits into the category of the derringers of the future, along with the COP 357 which was in “Blade Runner” and this crazy Japanese Airsoft derringer kit.  Is it, uh, wrong to admit that we sorta want someone to make that Defiant a real gun?  No, no, that’s… that’s silly. 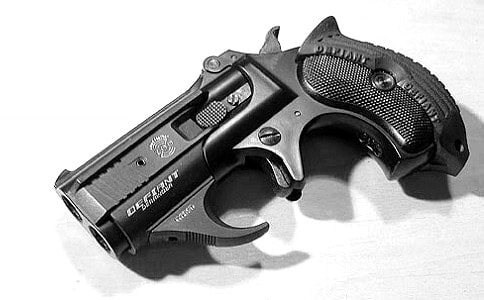