As like most things in life, there are several different ways to reach your destination. The draw is no exception. Depending on who you receive your handgun training from you might be taught the draw from a three step foundation or a four step method or, perhaps, you practice a method with no definitive steps at all: just draw and shoot. Is there really that big of difference? If so, which method or technique is best?

Because there are several particulars to drawing a handgun based on what kind of holster and position it’s placed (e.g. ankle holster, shoulder holster, purse holster or man-purse if you’re so inclined), let’s just focus on the classic, strong side hip draw from a holster.

The three-step draw simply eliminates the position of a one-handed grip and rotating just above the top of the holster. The idea behind eliminating this step is to get student-shooters not to pause here.

Over the years as I’ve watched instructors and students mainly teach the more popular four-step draw and I’ve noticed students tend to pause definitively at each step, even after the coach or instructor tells them to draw and shoot at full speed. Some could argue that it just might take longer for some students to get used to the draw by the steps; I believe those students get confused and think they must pause and decisively hit each step. Since students—especially new students or students new to the draw—have been taught to do it that way (that is, the four step draw method), they believe it is vitally crucial to pause at each step to ensure it was done correctly.

Don’t get me wrong, students pause at the various steps during the three-step draw too. In fact, instructors usually have all students draw and pause at each position for several repetitions before having them draw at full speed.  This is a good idea, but it also can foster habits that in a real world scenario may be impractical.  To combat this, after seeing my students are safe and “getting it” and now attempting to go full speed though visibly not feeling comfortable with it, I’ll simply say right before the drill, “Draw and shoot because there’s someone right in front of you, trying to kill you!” Often this is when things start to click. 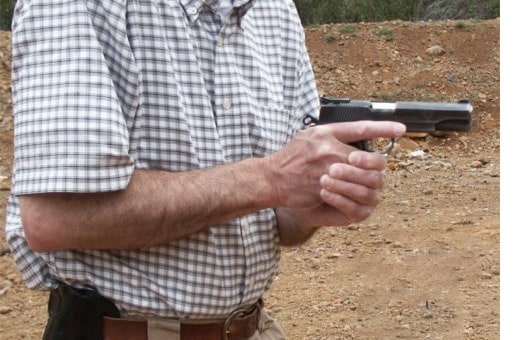 You have to remember though, it’s important to keep your muzzle pointing down range, or pointing at the threat/target all throughout the draw (something covered explicitly in the four-step model). Don’t dip the muzzle of the gun during the draw, which looks like someone bowling with a gun, or conversely, go fishing, pointing the muzzle high in the air.

Overall, though, there’s really not that big of a difference between the three-step and the four-step draw, and in reality, the step not specifically covered in the three-step draw is still performed.

One last—but very important—thing: it is critical to always remember and apply the core safety rules. A couple of notes apply specifically to the draw. Here they are:

First: Treat all guns as if always loaded.

Second: Never point your muzzle at anything or anyone you’re not willing to kill or destroy.

On the draw, shooters could have a tendency to point the gun at their support hand…that is, if the draw is done in correctly. Keep your support hand in tight to the chest then meet the grip as the gun is drawn. More on this later.

Third: Keep your finger straight and off the trigger until you’re ready to fire.

Right at the very end of your draw, you can put your finger on the trigger. Not a moment before then. And, keep your finger way off the gun when holstering.

Fourth: Know your target, backstop and beyond.

Have fun. Stay safe, and keep adding to your tactical toolbox.

Disclaimer: Shooting is an inherently dangerous activity, but can be fun and exhilarating. This piece is informative only and does not replace receiving quality training from a trained professional. In other words, don’t shoot yourself—or anyone else—while practicing the draw…in the leg or in the hand or anywhere else for that matter.