The 100 Year Timeline for the Colt 1911, the Greatest Pistol Ever Made

It’s Friday morning and as I do every Friday morning, I take down that old family Colt 1911 and give it a good cleaning, an act that to an outsider may say resembles something of a religious rite.  It’s been almost three months since the last time it was taken to the range, and it’s been cleaned probably ten times since then. Nevertheless, it’s a 1911 and it deserves some respect.

It was my father’s favorite pistol, and was given to him by his father, so it’s been in the family for some time. I honestly marvel at that gun, and today it seems to hold some added special significance as we officially approach the end of 2011 and the end of celebrating 100 years of the Colt 1911, the handgun that really pretty much started them all.

In 1896, Colt contracted John Browning for the development of a semi-automatic pistol. In 1903 Colt began the design for the .45 ACP caliber cartridge, after the failure of the .38 Long Colt cartridge to stop Moro warriors during American engagements in the Philippines. 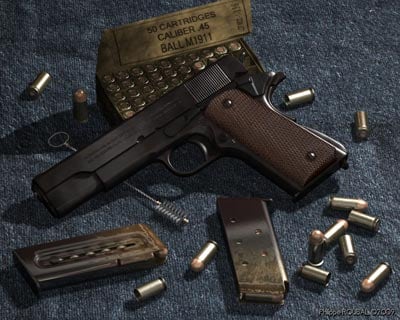 In 1905, the first semi-automatics were produced and went into production the following year, bearing the stamp Model 1905 (I have a buddy with the RCMP up in Canada who has a pristine example of a 1905, by the way). The following year, 1906, pistol trials began their search for a qualified replacement handgun for our military. Seven handgun makers submitted designs, but at the end of the trials only two pistols made the final cut, the Colt and the Savage pistols. On 29 March, 1911, after a torturous, head-to-head 6,000 round competition, the U.S. Army chose the Colt over the Savage, and the Colt Automatic Pistol, Caliber .45, M1911 was born.  And it wasn’t long before the infant pistol was walking.

On 6 April, 1917, the U.S. declared war on Germany and we entered World War I—a decision that would serve to provide a proving ground for the newly developed M1911 and cement the model as a staple of the US armory. At the start of war operations there were only about 60,000 M1911s on hand, but production was ramped up considerably during the war effort (a concerted collaboration between Colt, Remington-UMC and the Springfield Armory).  By conflict’s end production reached a zenith of around 2,200 M1911s produced a day. 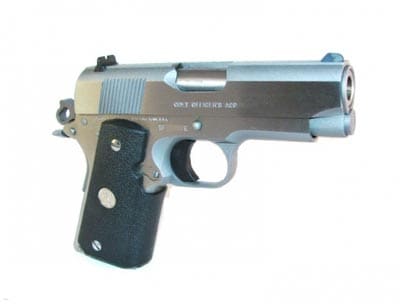 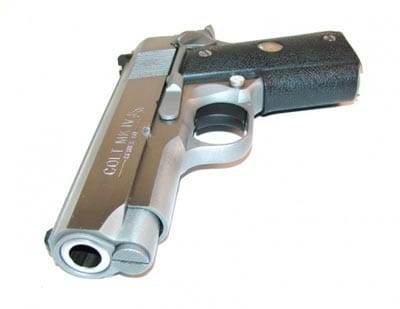 On 11 November, 1918, the Armistice was signed and World War I ended.  During the in-between years of World Wars I and II, some changes to the 1911 were recommended, and the upgraded pistol was renamed the 1911A1.  The attack on Pearl Harbor on December 7, 1941 signaled our official entry into World War II and also rung the bell for an increase in production of the freshly dressed 1911A1.  From 1942 to war’s end in 1945, some two million M1911A1s were produced primarily by Colt, but also by some sub-contracted gun makers, such as Ithaca, the Union Switch and Signal Company, Remington-Rand, and, believe it or not, even the Singer sewing machine company.

With a huge surplus of pistols, contractors, understandably, did not feel the need to renew orders for the pistol, post 1945, but in 1949, trials began for a new semi-automatic pistol for officers, now in 9mm.  Colt introduced the M1911A1, this time with an aluminum frame and a barrel that was 4.25 inches in length. It became known as the Commander Model (it was for officers after-all) and in 1970, Colt re-tooled the Commander Model and made it with an all-steel frame. It was given the name of the Combat Commander and the following year the Mark IV series was introduced as the Series 70, M1911A1. It had a new collet style of barrel bushing—clamping support for the front of the barrel in the slide and providing a better bearing surface for the slide to traverse the barrel during the actions recoil cycle. Twelve years later, in 1983, Colt re-designated all 1911 pistols as Series 80 models with a re-designed half cock on the hammer and a firing pin safety. In August of 1985 the 1911A1 was retired from military service and replaced by the Beretta Model 92 9mm semi-automatic.

That certainly did not mean the end for the pistol, however, as more and more gun makers are coming out with their own versions of the latest, greatest 1911. The latest one I saw advertised was for the Sig Sauer line of 1911s in .22 long rifle, 9mm and .40 Smith and Wesson but examples abound, especially in the waning days of 2011.

The consummate sidearm, Colt’s M1911 symbolizes the might and dedication of the individual soldier—the last line thing between you, the enemy and the great equalizer.  In my eyes, something that important deserves a little love once a week.