Meet the Model 1873, single shot, Springfield Carbine.  It was the standard U.S. Cavalry issue in the late 1870s and it was the first breech-loading rifle adopted by the Army.

It remained in service for 15 years as an armament mainstay of both cavalry and ground troops and to many, it was known as one of the worst US military weapons ever issued.

The rifle, in both full length and carbine versions, was used in the Great Sioux War of 1876 involving the Lakota, Arapaho and Northern Cheyenne nations, a conflict sometimes referred to as the Black Hills War. All of these warring tribes had adapted to a horse centric culture centuries prior and, as such, it became evident to an expanding settlers that Native American riders were the equal if not superior to any mounted soldier in battle. Consequently, it became necessary to develop weapons that would mitigate the advantage of guerilla warfare tactics, characteristic of these protracted Indian Wars and the brass back east hoped the Model 1873 would provide that leg up for the Army.

Springfield Master Armourer E.S. Allin had made only five versions of the Allin trapdoor design prior to the Model 1873. These rifles were named for their hinged breechblock design that opened upward like a trapdoor, allowing shooters access to the chamber and in turn faster, cleaner loading.  In the wake of the Civil War the U.S Government had 1.5 million surplus muzzle loading M 1863 percussion rifles and numerous attempts were made to modify these weapons to function with Allin breach loading mechanism.  The initial Allin conversion was for a .50-70 cartridge, though by this point, after five earlier attempts, the design had morphed into a completely new weapon the Model 1873.

The Model 1873 was a very powerful rifle for the era with a muzzle velocity of 1,350 feet per second with a .45-70-405 (405 grain) cartridge.  The recoil proved too robust for mounted troops as it tended to unhorse the soldier. A reduced load (350 grain) was created specifically for cavalry, restricting the muzzle velocity to a more manageable 1100 feet per second for the horsemen.

The rifle was initially issued with a significant inventory of copper cartridges and this created a major problem. Shooters discovered almost immediately that the copper would expand upon discharge and repeatedly jam in the breech, requiring manual extraction using a knife edge to pry loose the hot spent shell. This rendered the weapon a second-rate club in battle and not too effective in a gun fight.

The barrel length of the infantry model was 32 5/8 inches and the cavalry carbine had a much reduced 22 inch barrel to permit additional maneuverability while on horseback.

General George Armstrong Custer’s battalion was armed with the carbine version of the Springfield Model 1873 at the Battle of the Little Bighorn, also known as the Battle of the Greasy Grass in June, 25 and 26, 1876. 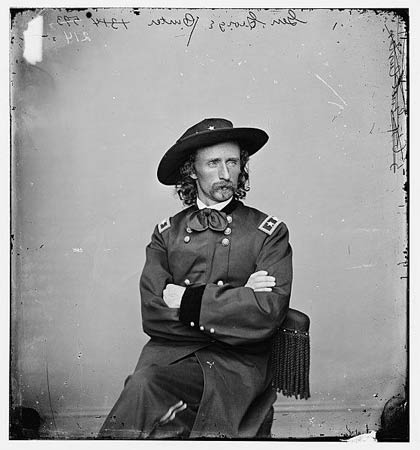 Custer led the unprepared 7th Cavalry based on poor intelligence, bad tactics and hubris against the Native Americans who better were armed with the superior Henry, Spencer and Winchester repeating rifles.  These weapons poured fire into the 7th Cavalry ranks and, though the belief that Custer lost at Little Big Horn because of malfunctioning hardware has been largely debunked, the single shot Springfield carbines were likely still outmatched.

Springfield produced them until 1877 (though the Army continued to contract the design for manufacture until 1886) turning out about 73,000 total trapdoor carbines. The 1876 rifles are marked ‘model 1873’ over an eagles head on the breechblock while the markings changed mid ‘76 to simply US Model- 1873. As you can imagine, these markings affect the guns value.

On the collectors market, trapdoor rifles usually fetch between 700-1200 dollars though a little birdie tells Guns.com that they’ve noticed a drop off in price lately, with some good condition carbines going for as low as 600 dollars.  For something that’s well over 100 years old, that really isn’t a bad deal, whether you want it to shoot, show it off or keep it as a reminder of how far American rifles have come.