Fuzzy Memories of the Stoner 63 and its Many Configurations

Though his name may not jump to people’s lips like John Moses Browning or Samuel Colt, in the 1950s and ’60s, Eugene Stoner of AR-15 fame, was one of the most influential weapon designers in the world, so influential in fact, it’s hard to imagine a modern American small arm that hasn’t incorporated some aspects of Stoner’s original AR designs into their own system at one time or another.

But, as is often the case with innovators light-years ahead of their time, many of Stoner’s most “outside the box” designs were hampered by the prevailing shortsightedness of the era and perhaps the classic example of this is the Stoner 63 (aka the XM22/E1), a completely modular weapon system built around a common receiver that could be assembled into a rifle, a carbine or number of various machine gun configurations—way back in 1961.

One Receiver to Bind Them All 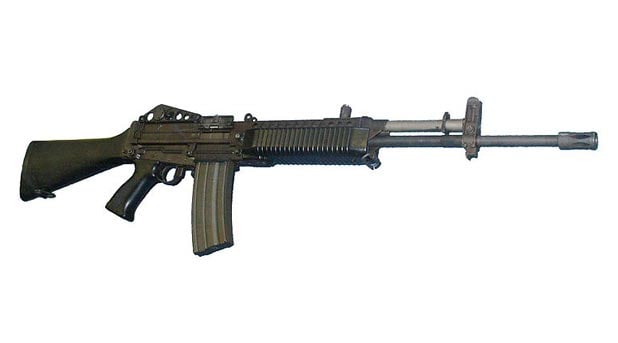 After Stoner resigned his position at Armalite where he was responsible for the AR-15 (though really the M16), AR-10 and AR-5 survival rifles, he took a short walk down the road to Cadillac Gage, a small arms development company also based in Costa Mesa, California (along with Armalite), and petitioned the firm for help on a new rifle design, prominently featuring a fully invertible receiver upon which many weapons could be constructed.

The only components that were common to all permutations of this weapon system would be the bolt, the piston, the receiver, the trigger mechanism and the return spring. To these core elements various barrels, bipods and tripods, buttstocks and feed devices could be added or swapped out into different designs. The beautiful part though was that even though the system was not completely tool-less, much of this reassembly could be done in the field, dependent on the demands of the current tactical situation. 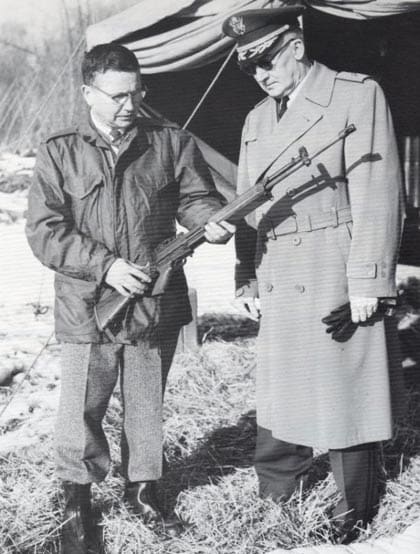 The first prototype, the Stoner M69W (called such because it read the same upside-down) was a weapon system comprised of 15 modular units (subsequent prototypes and variants like the Stoner 62 in 7.62x51mm NATO and the Stoner 63 would more or less continue this trend of 17 units per system).  These components could be easily arranged and assembled in such ways that the single weapon essentially granted the operator access to a whole mobile arsenal of small arms, with each variation offering different strengths for different combat scenarios.

The primary basis for the Stoner system was the rotary lock, the same one he first used on the AR-10 and later on the AR-15/M-16 rifles. The Stoner 63—the final and most “successful” model—however, used a vastly different method of gas operation, inasmuch as it was based on a long-travel piston that actuated the rotary bolt, consisting of seven radially symmetrical locking lugs.  These lugs engaged a series of recesses in the barrel extension with the full effect of the mechanism distributing the firing load evenly around the bolt head and barrel socket.  This set up also went a long way to reducing stress and increasing the longevity of the weapon system’s receiver components—vital to the success of weapon that relied so heavily on strong and adaptable internal parts.

The Stoner 63 and Its Configurations 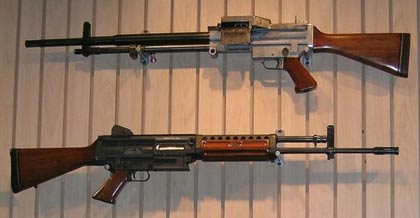 As mentioned above, the Stoner 62 models were originally developed to use the 7.62x51mm NATO cartridge, but it became clear to its designers early on in this weapon’s very brief production life that the promising 5.56x45mm NATO was rising to dominance amongst military firearms and plans to re-chamber the platform began while these Model 62 rifles were still on the workbench. The changes pursuant to this recalibration had the additional benefit of making many of the other components in the system lighter and, hence, an overall lighter weapon with obvious tactical advantages.

Its overall length was 40.23 inches without any attachments, and had a standard barrel length of 20 inches. Its fully loaded weight was 9.68 pounds and it had an impressive cyclic rate of fire of 660 rounds per minute, as well as a muzzle velocity of 3,280 feet per second. It used 30-round curved magazines, reminiscent of AK mags.

The “primary” weapon system for the Stoner 63 in 5.56x45mm NATO was a carbine with a folding buttstock, though about many configurations could be achieved from this base model by swapping out furniture.  These included assault rifle versions, fully-automatic machine gun versions with either bipods or tripods, as well as the ultimate addition of a heavy barrel version for hot and long shooting. In far fewer numbers came the solenoid-fired machine gun for co-axial use in armored fighting vehicles. 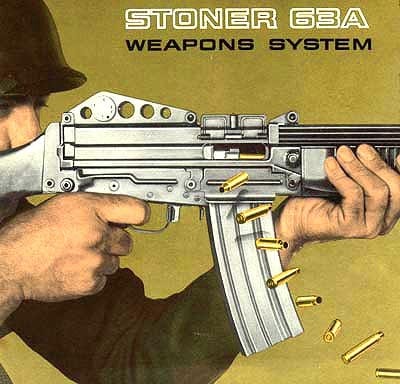 Across the board, the platform saw basic upgrades in the form of the Stoner 63A and in field tests, the most military outfits recognized these configurations:

1.The Stoner 63 Carbine was the primary version and saw field-testing with the US Marine Corp in the late 1960s.  They didn’t pick it up.

2.The Stoner 63 Rifle was likely considered the “secondary” weapon system as it was essentially just the carbine model stretched out.  The gun shot from a closed bolt—which was very different from the machine gun versions—and took a standard 30-round box magazine.

3.The Stoner 63 Automatic Rifle had one firing mode, fully automatic, and featured an open-bolt design that fed rounds in from a top-mounted, 30-round magazine requiring the front and rear sights to be offset to the left.

4.The Stoner 63 Light Machine Gun configuration also fires from an open bolt like the AR version but it was belt-fed courtesy of a 100-round plastic ammo box. The receiver is inverted on the machine gun models (Stoner’s greatest ambition for the platform) so spent brass is ejected to the left and the gas cylinder is below the barrel.

6.The Stoner 63 Fixed Machine Gun was designed specifically to go on an Cadillac Gages amphibious anti-personnel carrier, the Commando, but never officially saw service. It was internally identical to the other machine gun version but though looked very different on the outside as the model did away with front and rear sights, foregrips and pistol grips.  But perhaps the coolest feature was that shooters used a 24V solenoid to fire the gun remotely.

7.The Stoner 63 Commando was a derivative of the machine gun configurations with an emphasis on portable firepower. The weapon took a 100-round drum magazine below the receiver with the cocking handle is mounted underneath the foregrip for easier access.

8.The Stoner 63 Survival Rifle was poised to be added on as a possible configuration in 1964 but Stoner ended up only making on prototype. It was in response to the success of the Colt Model 608, which US aircrews had adopted as defense weapons (prior to the AR-15, Stoner’s biggest hit was the AR-5 survival rifle, also adopted by the US Airforce). Mechanically the rifle configuration, most of the modifications were made to accommodate USAF size constraints. 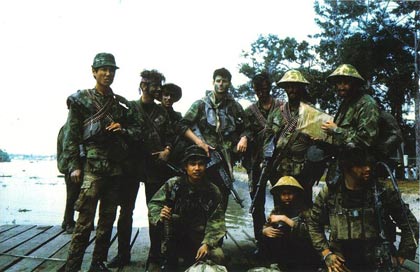 The Stoner System was put into initial production at the Cadillac Gage company where it was designed, with the outfit producing around 2,000 examples.  Subsequent production runs were carried out by the Dutch Ministry of Defense.

In the mid to late ‘60s, the platform was field tested by the USMC and various special operations forces.  Though never fully embraced, it garnered a devoted following from members of the U.S. Marine Corps and the U.S. Navy SEALS, who both used the Stoner 63 in limited numbers but with great success during the war in Vietnam. Navy SEAL units adopted both the Commando and Light Machine Gun configurations for operations in Southeast Asia throughout the ‘60s and ‘70s.

The system faded from the scene following the end of the war and was entirely phased out in favor of the SAW in the 1980s. 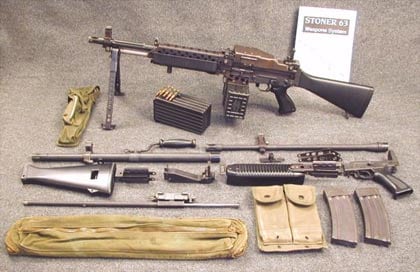 Today, Stoner 63 Systems are very hard to come by with the originals’ number in the dozens, not hundreds. Prices tend to circle around the $72,000 and considering the rarity of the weapon and the fact that you get seven rifles in one, this number is scary though not unreasonable. Every once in a blue moon they’ll show up at gun shows but the internet is most likely more fertile ground.

There are however a number of descendents out there, including Knight’s Armament Company, Light Machine gun, an upgrade of the original and Robinson Armament Co.’s M96 Expeditionary Weapon System a semi-automatic weapon patterned closely off of the Stoner 63.

In 2012, we can clearly see that Stoner 63’s completely modular design was visionary for its time, but in 1961, the strange concept failed to catch fire amongst military brass despite glowing field reports.  Yet, with manufacturers like FNH touting modular sniper rifles in the form of the Ballista as the future of combat, perhaps it wasn’t that Stoner was out of step with the rest of the shooting world, but rather the shooting world needed to catch up to him.