The da Vinci Cannon: If you Want Peace, Prepare for War

Leonardo da Vinci wore many hats—so many hats in fact, that when considering the master of harmony and measure’s true occupation (as in mathematician, engineer, painter, etc), it’s almost best just to say “genius”.  Da Vinci painted the Mona Lisa, sculpted, designed architecture, wrote music, proved mathematical theorems, pursued astronomy and numerous other scientific disciplines and, as a military engineer, he invented arguably the world’s first piece of mobile artillery, a three barrel cannon, of which there is only one known example in the world.

Though it was only last summer that officials with the Benkovac Heritage Museum in Croatia verified the three barreled cannon was in fact a da Vinci design, the weapon was first discovered in 1968, when children exploring 15th century Klicevica Fortress in the Balkans stumbled across the odd looking piece of artillery.  The Benkovac Heritage Museum acquired the da Vinci cannon in the late 1990s (though da Vinci had not been confirmed as the designer at the time) in the aftermath of the Croatian War of Independence, fought between Croats and Serbians from 1991 to 1995, after Croatia declared its independence from Yugoslavia.

A spokesman for the museum proudly told for Guns.com that, “This is the only remaining cannon left by da Vinci in the world” and today, you’ll still have to travel to Benkovac to see the gun because, being is one of museums most valued exhibits, there are no current plans to lend the cannon out to other museums. 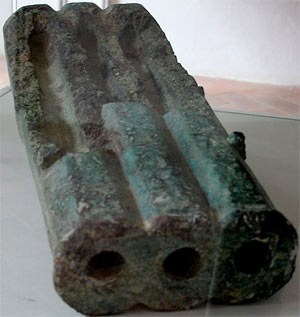 The museum officials also added that, given there are no markings on the cannon whatsoever, the gun was found over 350-miles away from Venice and triple barrel cannons in Europe are just generally pretty rare, it was difficult to deduce the exact date of the piece let alone substantiate the claim the cannon was an unsigned da Vinci design. Regardless, researchers from around the world were able to gather enough documentation to corroborate da Vinci’s involvement and, as far as they know, the cannon is the only existing example of a da Vinci firearm in the world.

The most compelling piece of evidence comes from a drawing in Leonardo Da Vinci’s Codex Atlanticus—the artists largest compilation of drawings and writings.  The 12-volume set features numerous weapon and military designs, and one drawing in particular bears a striking resemblance to the cannon in Benkovac (the original drawings and a model of this cannon exists), making it the only gun that was made from the book (that we know of).

Supporting evidence can be found in the date and the geography. Benkovac is located near the Adriatic Sea across from Florence and within marching distance of Venice, Italy.   Around this time, Italy (well before it was Italy) was embroiled in near constant warring between various city-states on the peninsula (which many believe was what prompted da Vinci, a vegetarian, Renaissance man who used to buy caged birds simply to release them) to turn his attention to the battlefield in the first place.

At the time, the Venetians were also fighting the Ottoman Turks for control of Dalmatia (now the area of Europe known as the Balkans). Marin Curkovic, director of a museum told us they think, “it was made in Venice and brought here, or it may have been made locally.”

During the 14th and 15th centuries, most single-shot cannons of the day were used defensively (like on the walls of castles) and kept in stationary positions rather than on the battlefield. The reason behind this was a practical one: cannons are and were really heavy and took a lot of time to reload let alone move and aim. At its heart, da Vinci designed the triple barrel cannon to address both of these problems – a lighter piece of artillery that could be positioned around the battlefield and fire more than one shot before reloading.

In his life as a weapons designer, Leonardo da Vinci wisely clung to the philosophy that mobility of force was decisive to an army’s victory in battle and you can see this concept expanded in many of the master’s war inventions which tend to emphasis movement, like mobile bridges and ladders, and portability like the da Vinci three tier machine gun. This thinking, however, began in da Vinci’s triple barrel canon invention.

Weighing more than a thousand pounds (yes, this was considered “portable” back then), the weapon’s three thin barrels are about two feet long and have a bore diameter of about one and a half inches, making it a 133-caliber weapon.

Soldiers wheeled the da Vinci cannon around the battlefield on a wooden carriage (the original wooden component has since been lost), and the relative lightness of the cannons combined with the size of the wheels (which, according to experts, must have been huge) made positioning two tons of gun possible.

The cannon was front-loaded, usually with rock-like projectiles, and adjustable in height using a peg device to elevate the barrels and making rudimentary adjustments to accuracy attainable for a small artillery crew in the field.  These crews had the option of firing all three shots at once or firing them independently. 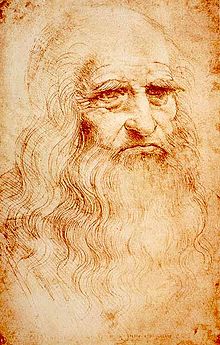 Researchers also believe that though far ahead of its time in concept, the gun’s actual performance on the battlefield was largely ineffectual and perhaps more dangerous to its operators than to an enemy.  Comparing da Vinci’s next level design to other primitive cannons of the period, it’s likely the da Vinci cannon would prove too confusing to load during the heat of battle, particularly for nominally trained gun crews (most likely comprised of uneducated slaves) that couldn’t understand the potential of artillery fire.

Additionally, there are serious safety issues associated with loading the cannon from the front, especially with the other two barrels ready to fire. Scarring on the relic’s underside has led many researchers to surmise the weapon’s carriage had been blown off in a firing mishap.  Taking into account the materials used to caste the barrels and the crude gunpowder used in the 1400s, the development was still very much in its infancy, the explosion was in likelihood fatal and its failure in the field is probably why we find no mention of this cannon in any literature from the period.

More to the da Vinci Canon?

Whether this is true or not is speculative, but one thing we know for sure is that da Vinci did not stop developing weapons.  Da Vinci later expanded his cannon design with a 13-barrel weapon whose muzzles pointed outward in the shape of a fan, mounted on a wooden, wheeled chassis, sometimes called the world’s first machine gun or the da Vinci machine gun.

He also sketched a prototype tank—a human powered, turtle shaped armored dome with cannons mounted on all sides and wheels.  An interesting footnote is that da Vinci intentionally placed the gears of the tank in his sketch in the wrong position.  This was so that if anyone stole his idea and tried to make the tank, it would be unworkable—an early example of arms control.

Unlike the three-barrel gun, these ideas remained on paper, though just like the da Vinci cannon, they were all good ideas, just too far ahead of their time.