Introduced by state Senate Majority Leader John Unger (D-16), Senate bill 149 mandates that police must return all seized firearms to their lawful owners provided the firearms are not currently being held as evidence in a criminal investigation.

If, however, the owners cannot be found or they are unable to take possession of the firearms, the authorities will now be required to sell them at a public auction to a federally licensed firearms dealer.

This new law mirrors pending legislation in Georgia, S.B. 350, which would also require authorities to re-circulate seized firearms into the retail market via licensed dealers, in lieu of them being destroyed. 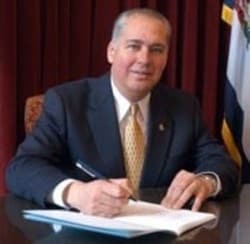 The second bill to take effect is Senate Bill 353.  Introduced by state Senate President Jeff Kessler (D-2) and Senate Majority Leader Unger, this bill streamlines gun purchases for individuals in a possession of a valid concealed carry permit by giving them an exemption from the FBI National Instant Criminal background Check System (NICS).

In other words, the new law expedites the process of purchasing a firearm for law-abiding gun owners, i.e. those who’ve already cleared a background check.

The last bill that Gov. Tomblin signed into law – Senate Bill 478 – creates an apprentice-hunting license for both West Virginia residents and non-residents.  These special licenses will be available to youth hunters of any age.

The purpose of this license is to encourage novice hunters to learn the ropes from an experienced hunter – a person who is eighteen years of age or older and who is in possession of a valid West Virginia hunting license.

However, unlike current youth hunting licensees, this one allows the youth to go hunting, under the supervision of the experienced hunter, without having to take the otherwise required hunter education course.

One could categorize all three of these new laws as “common sense” gun laws.  Am I right?