The trenches of the Western Front in World War 1 changed warfare forever. With each set of lines fortified and bristling with water-cooled machine guns that could spew out 600-rounds per minute, it was certain death for infantry to attack across No Man’s Land. To defeat these trenches, the tank was invented. To defeat the tank, the anti-tank gun was invented.

First, these were just big game “elephant guns” pressed into service. However, by 1918, it was apparent that a large, purpose-built rifle capable of shooting it out with an armored beast would be needed. Captain HC Boys of the British Army set about to come up with one.

The unique Boys .55 round

Captain Boys (not Boyes!), an engineer at the Enfield works, began work on a bolt-action large bore rifle that would be capable of making Swiss cheese out of the tanks of the day, while still remaining light enough for a solitary soldier to carry on the battlefield.

Standard rifle bullets such as the .303 and 30-06 proved that even hardened armor piercing versions were too weak. Tests with the large US Browning .50-caliber (now 12.7x99mm NATO) showed more promise.

The vaunted “fifty-cal” could penetrate 0.76-inches of armor at 100-yards. If this caliber was a 10 on a scale of one to10, Captain Boys wanted 11 and set about getting by taking a .50 caliber case and necking it up to accept a .55 caliber (13.9x99mm) bullet.  They wrapped the whole thing in a belt like a proper British magnum elephant round, and designed the rifle around it. Appropriately, enough the round was manufactured by Kynoch, known around the world for their line of safari elephant gun cartridges.

The finished product was a (sort-of, at 35-pounds unloaded) man-portable rifle capable of taking out a tank armored with 1-inch thick steel plate at 100-yards. The overall length, with the standard 36-inch barrel, was 5-feet 2-inches long, making the rifle taller than some of the men who would operate it. A five-round detachable box magazine gave the user an option for rapid follow-up shots if needed. Typically, a two-man crew would carry the rifle, spare parts, 8 magazines, and 40 rounds. 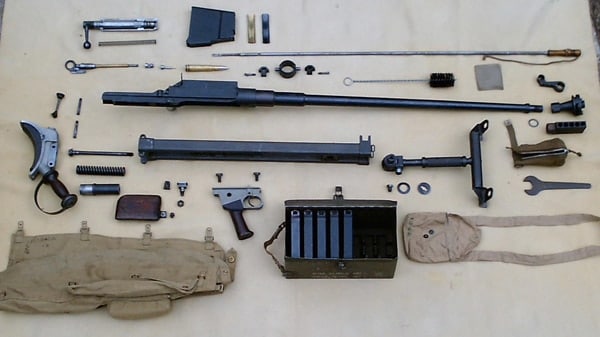 While on paper it looked like a David vs. Goliath weapon, the rifle was a brute on the user in the field.  Boys had designed the rifle with a large shock absorbed, butt pad, and heavy muzzle break to cut down on the understandably stout recoil. One user reported that the only punishment worse than carrying it was firing it and operators had to hold on ‘like grim death’ in order not to suffer a dislocated shoulder or broken clavicle. In training, almost all rounds fired through the Boys were .22LR rounds shot through a sub-caliber training device, a fact that undoubtedly allowed many gunners to finish training in one piece.

Captain Boys dubbed his project the Stanchion, after the reinforced gate that could stop bulls from pushing through. However just before it was adopted by the British Army the good captain died and the rifle was forever after simply known as the Boys.

Three versions were made for production: the MkI, the Mk1*, and the MkII Airborne version. The MkI was the basic and most popular type and featured a donut-type muzzle break. The MkI* was made in Canada by Inglis (who also made thousands of Browning High Power pistols during the war) and featured a harmonica-shaped muzzle break and redesigned bipod. The break on the Inglis weapon was an improvement over the old donut-style as it did not provide such a large vertical muzzle flash that gave away the shooter at distance as in earlier models. The Airborne model was, like other arms for paratroopers, shortened and abbreviated as much as possible. In hindsight, this was a bad idea as the stocky fire hydrants were unusable due to being too short to produce sufficient velocity to penetrate armor.

It is estimated that some 65,000 Boys rifles were produced in all three versions from 1937-1943. Their first use in combat was against Russian tanks at the hands of Finnish soldiers during the 1939-40 Winter War. The hardy Finns had received 500 of the Boys rifles and promptly put them to good use, knocking out Soviet tanks. These however were armored vehicles of a 1920s design and when the Brits met up with Hitler’s panzers in World War 2, their experiences were slightly different. Most of the more modern German tank designs had armor much thicker than what the Boys could penetrate. This meant that these heavy rifles were the first thing left behind in retreats by British Tommies in 1940. The Germans captured so many of them that they turned around and put them to use the next year against the Russians.

The Boys had a better record of accomplishment against light Italian and Japanese tanks and many young Allied gunners chalked up a few kills. One Australian Boys gunner in North Africa bagged three small Italian tanks in the same engagement.

The Boys was also seen in the hands of US Marines who used them as bunker busters and as a potent antidote to sniper-hides. This predated the current niche filled by the Barrett and other large-caliber sniper rifles popular today. After World War 2 the Boys was seen by first-line militaries as being obsolete and was replaced by RPGs and bazooka-type recoilless rifles. This did not mean the Boys was totally shelved however as it has popped up over the past half century in a myriad of Third-world hot spots and even in the hands of the IRA who used one in the 1960s to disable a Royal Navy warship.

Ever since 1946, Boys anti-tank rifles have been popping up on the surplus scene. In the 1960s, fully functional rifles were selling in magazine ads for $98.50 with surplus ammunition going for 10 rounds for $9. Times have certainly changed but collectors still love the heavy old bruiser. Today working copies still with the original barrel run in the neighborhood of $8000. Many collectors have had their rifle converted to fire .50 caliber BMG.  Prices of that round, while expensive, are still much cheaper than the dwindling supply of .55 Boys ammunition on the market.

Still, if you have a 1930s era tank on a rampage in your neighborhood, or a 5-gallon bucket talking smack from a statute mile away, it would be nice to have one of these on your wall.