Future Rifles that Could Be Deadly Past Two miles

Will a man-portable rifle ever be able to take a target at the 2-mile mark? There are 5,280 feet in one mile. When you double this and convert it to yards, you are looking at 3520-yards (3218.69m) needed to cover in a two mile shot.  No matter how you cut it, that is a long way. However, right now teams of firearms engineers are burning lean muscle tissue into the night over pots of coffee as black as your soul—to figure out a 2-mile rifle.

Long-range military snipers have been inching towards the 2-mile mark for generations. In 1967, famous Marine sniper Carlos “White Feather” Hathcock made a 2,286 yard shot from a modified .50-caliber M2 machinegun. This record stood for 35 years until 2002 when a Canadian Army sniper made a 2,657 yard shot in Afghanistan with a McMillan Tac-50 .50 caliber. Since then, this has extended out to a 2,707-yard confirmed kill by a British Army corporal, Craig Harrison. Harrison made his 2009 shot with a L115A3 Long Range Rifle, a specially equipped Accuracy International Arctic Warfare Magnum firing .338 Lapua Magnum LockBase B408 bullets.

While all of these shots are amazing, they are still about six football fields short of the Holy Grail 2-mile shot.

As far back as 2000, a civilian shooter by the name of Skip Talbot was putting shots into a 15’x12′ lava rock across 2 miles of Black Rock Desert with a Barrett .50 caliber. The 50-cal BMG, even in its M33 ball variety can be fired indirectly to over four miles and this has been a fact for almost a century, however we are talking about aimed accurate fire here, not a rainbow and a wish. To make a rifle capable of reaching out these great distances, manufacturers are going a little bigger. Barrett, the original .50BMG sniper rifle guys, is fast working on what they type classify as their XM109. 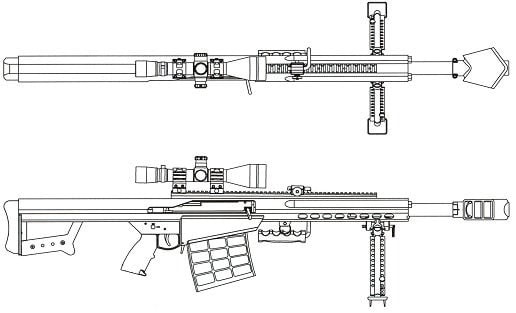 The XM109, also known as the Objective Sniper Rifle and the Payload Rifle, is what is known in the long-range biz as an anti-material rifle. Sure you can waste one of the beautiful 25x59mm high-velocity cartridges on a lowly enemy foot soldier rocking out to his MP3 player a couple miles away, but it’s really meant to zap radar arrays, fire control panels, helicopter rotor hubs, engine blocks and other high value assets. Barrett is hoping to capitalize on its proven M82/M107 platforms used worldwide with this nifty new XM109 upper that simply switches out. With a round with more than twice the mass of the venerable .50BMG, Barrett advertises that the XM109, when fielded, will produce effective hits out to 2.2-miles (show offs).

Not bad for a rifle that at 33-pounds overall is still marginally man-portable. Barrett has been brainstorming this firearm since the 1990s and has it under active development for at least the past eight years. The main hold up at this stage of development seems to be in manufacture of the radical new round it fires. Even if it doesn’t, the company has been hot and heavy with its unique .416 Barrett (10.6×83mm) round whose 400-grain solid brass boat tail spitzer bullet remains supersonic out to 2500-yards.

In 2001, John Taylor and William O. Wordman introduced the .408 Cheyenne Tactical, typically referred to as the .408 CheyTac. Taking the old .505 Gibbs British elephant rifle round and necking it down, they produced a 10.4x77mm wildcat round with amazing performance. By using an extreme custom barrel, meteorological and environmental sensor packages, and advanced ballistic computers, they put it to its tests. With their proprietary Chey Tac Intervention rifle firing the .408, in 2007 they set the world record for best group at a distance, landing three bullets within 16⅝ inches (42 cm) at 2,321 yards (2,122 m) near Arco in Idaho. 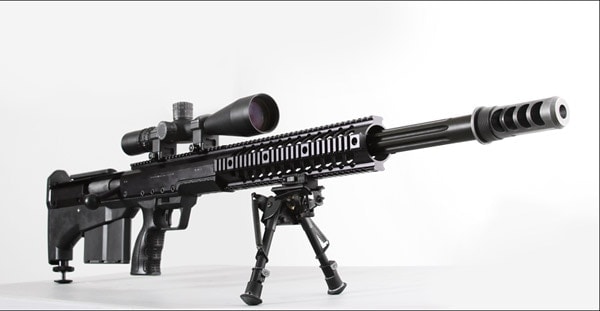 Officially they state that the rifle has an effective range of ‘over 3,000 yards’ and an experimental round was calculated to still be supersonic as far out to 3380 yards before it proved unsound in trials. It can be sure that within the next few years, if Barrett does not come out with a 2-mile gun, CheyTac will have one.

Since the mid-1980s the Austrian arms firm of Steyr-Mannlicher AG has been off and on in their quest for a modern anti-material rifle. Known as the IWS 2000, the 40-pound rifle uses a 15.2×169 mm armor-piercing, fin stabilized, discarding sabot round from a five round magazine. This 308-grain tungsten dart is about the size of a 5.56mm cartridge and is billed as being well over 2,000-yards capable. Steyr is very quiet and simply says on their website that the weapon, in R&D for more than twenty years is in ‘Advanced development.’ 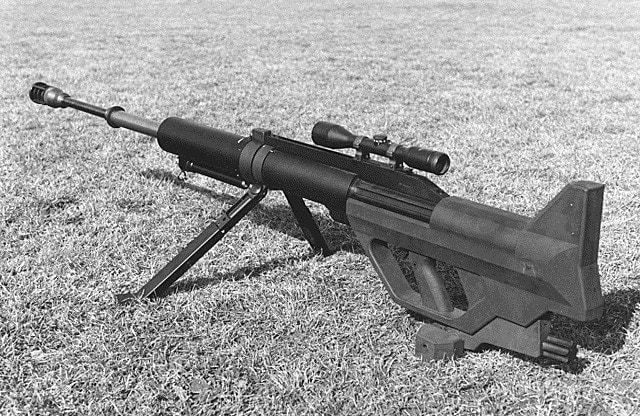