What is an insurgency weapon?

The concept of an “insurgency weapon” first came about debatably in the Second World War. Freedom loving resistance fighters behind the Nazi lines in occupied Europe had lots of heart but few weapons and to solve this problem the FP-45 .45 ACP single shot pistol was invented. The concept was that thousands of inexpensive and extremely simple to use (just point and shoot) close range weapons could set the German rear on fire by disseminating them throughout the civilian populations via airdrops and other more covert methods, diverting enemy combat troops from the front line for a minimal investment.

Yeats later, the US found itself in a similar situation.  With firearm confiscation in Cuba after 1959, and a looming invasion by US-backed anti-Castro rebels landing at the Bay of Pigs, a simple and effective shotgun that could be dropped across the island to local resistance members was envisioned. Enter Robert Hillberg and the Liberator.

Who Was Robert Hillberg?

Robert Hillberg was a firearms designer who worked for Colt, Hi-Standard, and others over a forty-year period while taking time out to work in the aviation industry on aircraft cannon during World War II. He spent time on development over the years on the Browning BPS shotgun, the Wildey .45ACP pistol, and the Whitney Wolverine 22LR. In 1960, he was head of R&D at High Standard and had the Liberator on his workbench.

The Design of the Liberator 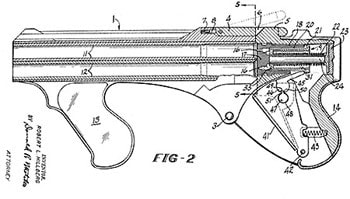 Hilberg’s shotgun was simple, rugged, and effective. The Liberator, to put it country simple, was a four-barreled 20-gauge top-break shotgun. This made the weapon capable of semi-automatic fire without the drawback and mechanical complexity of a bolt, or action. After each pull of the trigger, a cam would reposition the firing pin to move to the next barrel in sequence. The shotgun’s receiver could be die cast from zinc and used plastic furniture, with the only steel being in the short 16-inch barrels and in the very few moving parts. Overall, the 4-pound shotgun could be made for less than $20.

Ammunition would be supplied in a four-pack held together in a one-piece plastic sprue so that the entire weapon could be reloaded in one motion. With such a handy dandy weapon, guerillas all over the world could be armed for peanuts.

The rest of the story 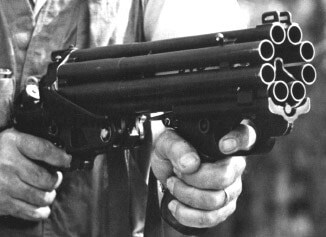 The Mark I version of the Liberator shotgun came out too late for the Bay of Pigs and the Cuban rebels, armed with 1903 Springfield and M1941 Johnson Rifles, were had no ‘insurgent weapons’ dropped across the island to assist their landing. Hillberg approached Winchester who studied the Liberator design and, after consulting the military about possible use for the weapon to arm Vietnamese defense forces, moved forward with testing in 1964. Hillberg patented a revised Mark II weapon (US Patent no. 3,260,009) as a “Multibarrel firearm with rotatable and reciferocable hammer”.  This new version was in more powerful 16-gauge with a collapsing shoulder stock, 13.5-inch barrels, and an overall weight now doubled to 7.6-pounds. 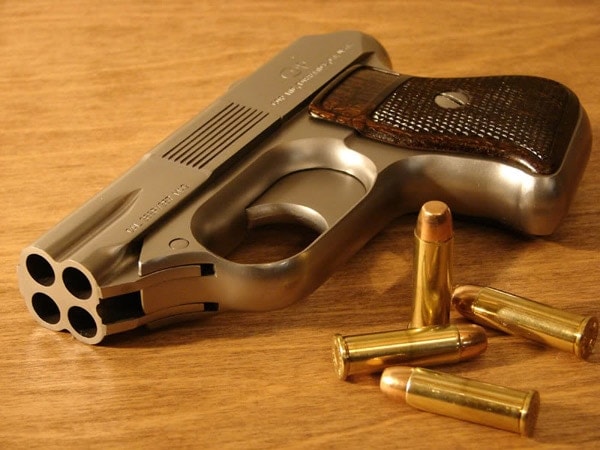 After much testing and a 12-gauge Mark III version being developed, the unique design never produced any orders. In 1967 Hillberg took his ideas to Colt for one more try and they assembled the Colt Defender, an 8-shot 20-gauge on the same lines as the Liberator with the same results. By 1971, the inventor had left his shotgun projects behind him and later went on to produce the 4-barreled COP357 derringer in 1983, which had slightly more sales but to a different market. The COP used the same basic break-open action with a rotating firing pin like the Liberator, except in a .357 Magnum pistol.

The Liberator was one of the great close-range combat weapons that never made it to production.