Let’s face it guys, most guns are a work of functional art that blends something mechanical into something magical. However, what can’t be denied is that there are a few firearms out there that never really worked out that magical part. Handguns it seems are the worst of the offenders, with more than a few horribly ugly designs floating around.

Sure, this is a cosmetic issue and as long as the gun goes bang reliably, who really cares what it looks like? Well for those who do, we wrote this article. 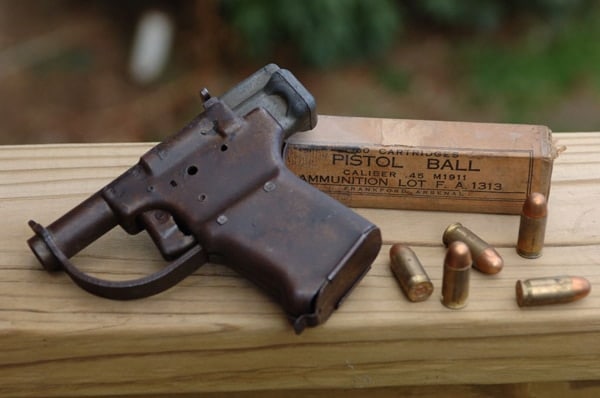 The ultimate in disposable, single-use pistols, the FP-45 Liberator was designed in World War 2 to be simple and cheap enough to make that they could be thrown away, twice. The first time was out of an airplane over occupied Europe. The second time was after it was used to knock off your local wayward Nazi—the thinking was you could then grab his gun and keep trucking. Built for peanuts, these bad boys cost a mint now to collectors. 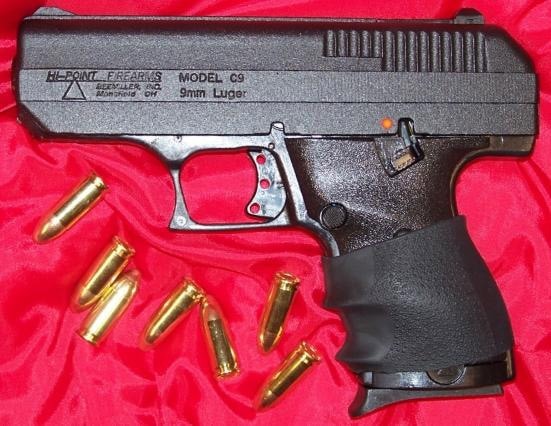 Yes, we have all seen the torture videos where they pull stuff on these oversize Zymak wonders and they just keep on banging away.

However, you can’t say that they aren’t as homely as your wife’s cousin Wanda. Still, it looks better than the older Maverick/Stallard JS potmetal designs that preceded it. Well, talk about comparing apples to…well we can’t think of a fruit as ugly as a Stallard so we’ll stop there. 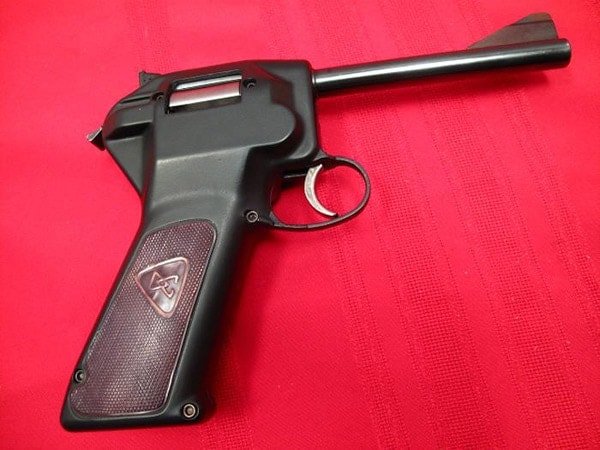 The proprietary ammunition the Dardick fired was known as the tround (seriously).

No, not the vacuum cleaners on wheels that chase Dr. Who. The term Dardick in the world of oddball firearms refers to inventor David Dardick who in the 1950s had some interesting ideas. He thought that the gun should be all about the bullet it fired so he invented a triangular cartridge called a tround and a series of guns to fire them. Not only did it combine all the worst facets of a revolver with the bad parts of a semi-auto and use a totally unique round, the gun was also pretty hard on the eyes. 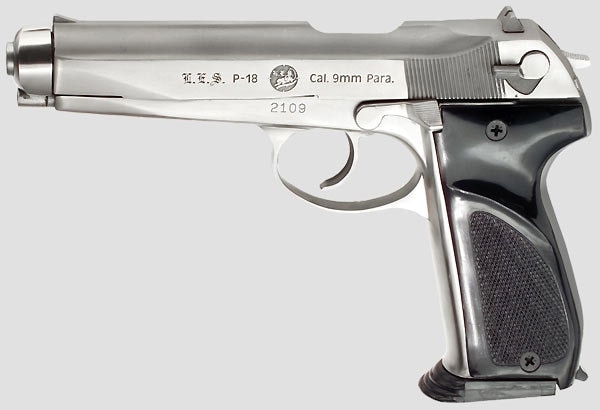 Steyr had an American importer by the name of Rogak run away with their GB design in the early 1980s and tweak it a little before selling it under his own name. It has a definite CZ52 look to it but had an 18-shot magazine when the polymer Glock, itself not a beauty queen, only carried 17. Take that Gatson!

Technically the Macchine Termo-Balistiche Model 6 Unica but known to the world as the Mataba Auto-revolver, this Italian stallion looks so far out there, its 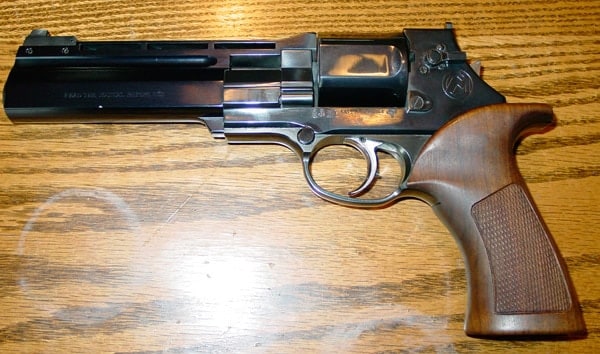 only real home has been in a couple dozen of movies. It seems that whenever a director wants a futuristic gun the prop master smiles and pulls out one of these. With its cylinder above the barrel and recoil that cocks the hammer every time, it is an interesting design that collectors seem to love. Today the Mataba’s mantle has been picked up by the visually similar Chiappa’s Rhino and others, so it would seem gun owners today still have a taste for funky revolvers. 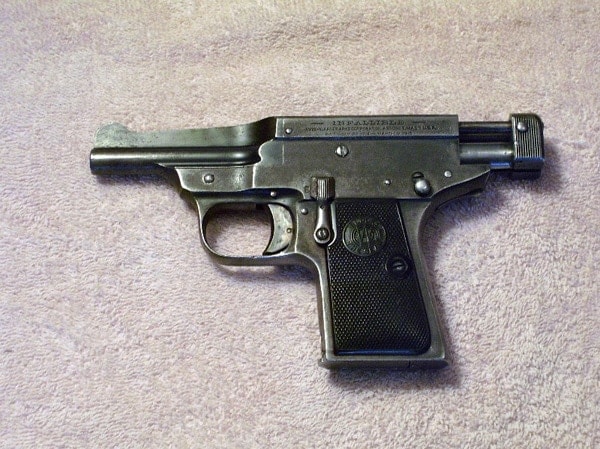 The Davis-Warner Arms Corp of Assonet, Mass was a small gun company that specialized in selling imported German pistols at the first part of the 20th century. When that pesky World War 1 thing broke out and the Kaiser decided that he needed all the pistols he could get, the logistics of this arrangement no longer worked for the American company, so they started making their own little gatt, a super homely six-shot striker-fired .32ACP they called the Infallible.

The thing is, if you cocked it wrong the breechblock had a nasty habit of leaving the gun at a high rate of speed. Guess no own consulted a dictionary before they named it infallible. 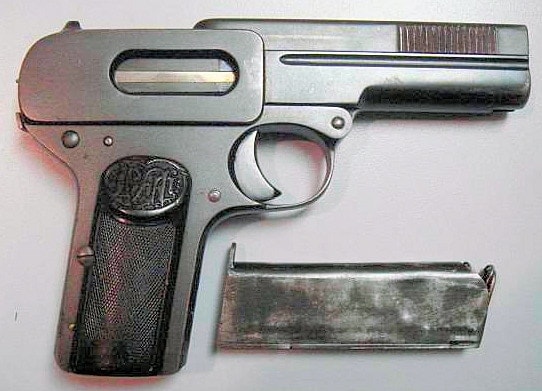 Invented in Imperial Germany by Louis Schmeisser, father of the more famous Hugo, the Dreyse M1907 looks like an art deco hair dryer. They were only made for about nine years but they were made in quantity. GIs brought back thousands of these oddball .32ACPs (why are they always 32s!) after both World Wars. They work, but are never, ever going to win a beauty contest.

We are not making this thing up. Cross our hearts the 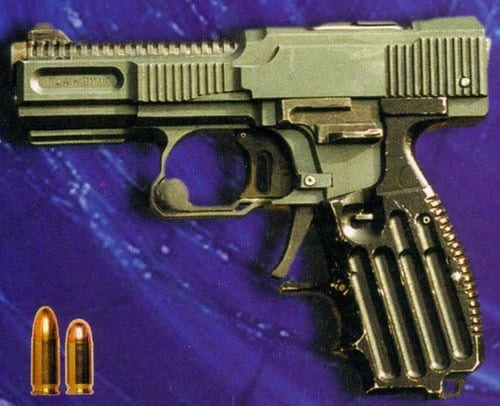 Shevchenko PSh-4 pistol is an actual firearm. Designed and built in the Ukraine, Russia’s version of the dirty south, it is something of the ugly pistol messiah. A 15-shot 9×18 Makarov gun that incorporates oddball features from other guns, many of which you will also probably never see in real life. Bad news is it uses the same action as the 1900-period Gabbet-Fairfax “Mars” pistol, and we all know how successful that was. Combine this with all of the styling of your favorite $15 Marksman air pistol and there you go. And yes, it does have two triggers. 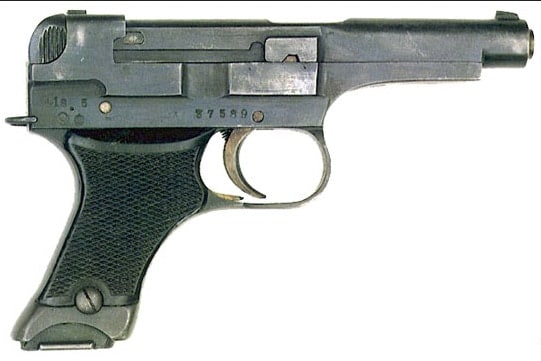 Dubbed the “suicide special” by military historians the gun looks like it shoots—horrible. For a military pistol (yes, this was a military issue pistol) it has several unredeeming qualities such as being heavy, having a magazine disconnect that doesn’t disconnect, having an exposed sear bar that tends to fire the gun upon holstering, and an almost impossible field strip procedure. But don’t worry, that’s just on the guns that were made early in the war, after 1943 the quality control really started slipping.

If you like these guns, that doesn’t mean there is anything wrong with you. Embrace it and treasure your ugly guns. Some people collect oddball things. Heck in Iceland there is a guy who has collected 143 different, uhhh, “members”, from 41 mammals.

However, even he doesn’t have a Warner Infallible.