The Colt Aircrewman Special: The all aluminum .38 caliber

In the early 1950s, the newly born US Air Force needed a brave new handgun for its atomic cowboys. The main thing, for better or worse, was that the gun be lightweight. The solution, in classic 1950s style, was aluminum Aircrewman revolver, which, much like a lot of 1950s style was both a success and a failure at the same time. 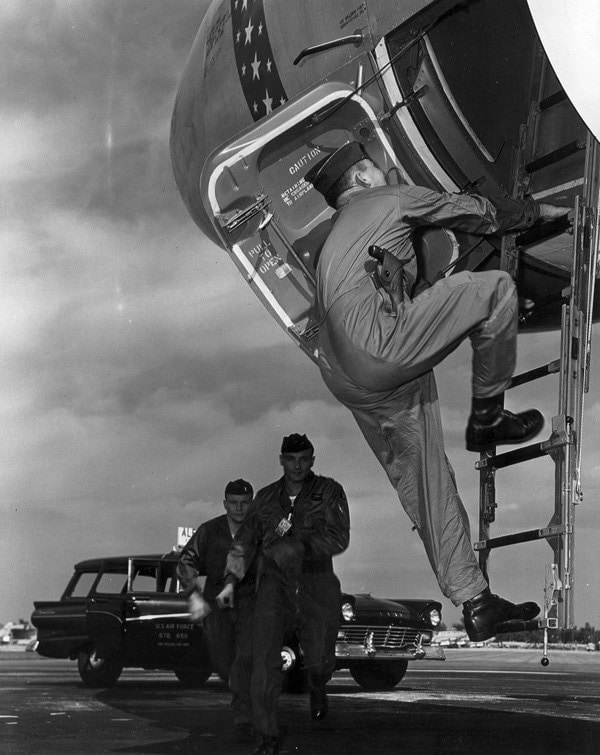 In World War 1, pilots and aircrew often found themselves lost, crashed, or shot down in areas that were less than friendly. This led to those daring young aviators to begin carrying handguns and in some cases rifles with them for those unexpected stops. Throughout World War 2, US Army Air corps, personnel and glider pilots often carried full sized .38 revolvers of various manufacturers supported by the occasional M-1 carbine.

In 1947, the US Air Force was carved off from the Army and the new brass realized the need for a modern space age handgun for the occasional aircrew emergency, survival situations, and nuclear weapon’s security breach. In a time where every ounce of weight was sliced from huge bombers like the Convair B-36 “Peacemaker” to allow them to carry atomic weapons to the Soviet Union, the watch word was ‘lightweight.’

Design of the Aircrewman

Colt answered this call for a small and effective, but super lightweight handgun, with a modified version of their then-new Cobra line of snub-nosed revolvers.  It was named the Aircrewman. 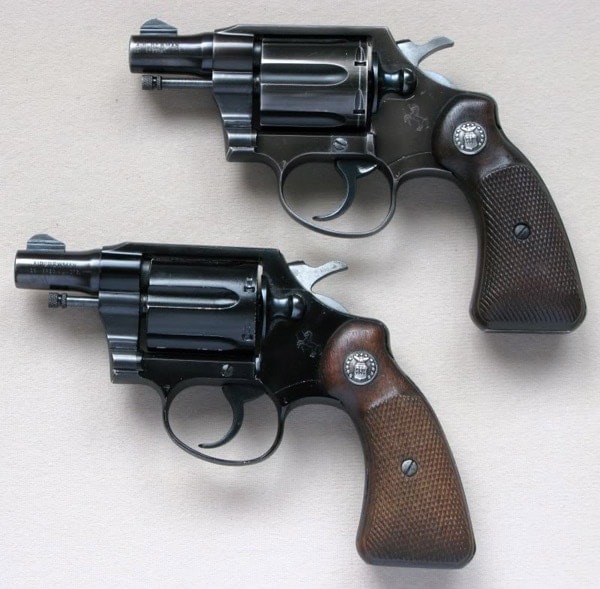 The Cobra itself was a revamp of the company’s earlier 1927-era Detective Special. Both were ‘D-frame’ six shot .38-specials with small profile rounded butts and 2-inch barrels. To carve weight away from the Cobra, Colt used space age aluminum for the frame and cylinder instead of the normal ordanance grade steel.

The Cobra already used an aluminum side plate, but to throw out all of the steel except in the barrel and replace it with the wondermetal was a bold step forward. To be safe, the Air Force used low-pressure rounds instead of commercial .38 SPL loads.

Whereas the Detective Special was 21-ounces and the Cobra was 16-ounces, the superlight Aircrewman tipped the scales at just 11-ounces with six rounds of 38-Special loaded. In comparison with the snubs of today, the 5-shot, S&W 637 Airweight comes in at 13.5. So yeah, the Aircrewman was about as light as you could get.

Colt made just 1189 of these guns in 1950-51. Records from Colt show that some 1,123 were shipped to the US Air Force from 12/21/1950- 4/23/1952. The largest lot of these, some 255 revolvers, was sent to Offutt Air Force Base in Nebraska in 1951. This is not unexpected as at the time Offutt was home to the bombers of the US Strategic Air Command, whose crews sat on constant ramp alert to scramble towards the Soviet Union with a cargo of atomic weapons.

Besides the Colts, between 1953-54, Smith and Wesson produced about 40,000 aluminum framed M-13 snub-nosed pistols to augment the small numbers of Aircrewmen in circulation. When stocks of M41 special ball, a low-powered round that pushed a 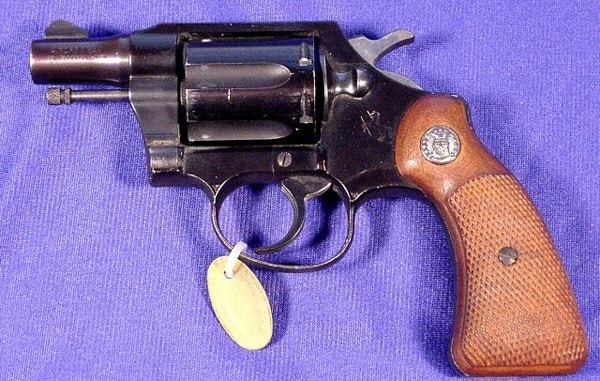 130-grain jacketed round nosed bullet grew scarce, users loaded their aluminum guns with full power stuff. This turned a couple of them into small hand grenades and kabooms were quickly reported.  In October 1959, both the Colts and the Smiths were recalled to their depots and crushed, their frames deemed unsafe.

To quote the USAF order at the time, “Because of the peculiarities of the M13 revolver, i.e., requirement for special ammunition, limited use and potential danger if used for other than the purpose for which it was designed, all M13 revolvers excess to Air Force requirements will be mutilated to prevent further use as a weapon. Residue will be disposed of as scrap.”

Though most ended up demolished, a few guns, already in the hands of retired flight officers escaped the wholesale slaughter.  Steel framed S&W 10s, 12s and 15s replaced them and kept aircrews company until as late as the 1990s.

Today it is thought that less than fifty surviving Colt Aircrewmen exist. Many of these are in museums such as the Autry, and the Springfield Armory Museum but a few are in private circulation. To say they are counted as one of the most collectable of all Colt revolvers is something of an understatement.

One Colt Aircrewman recently sold for over $25,000 at auction. Of course, it was serial 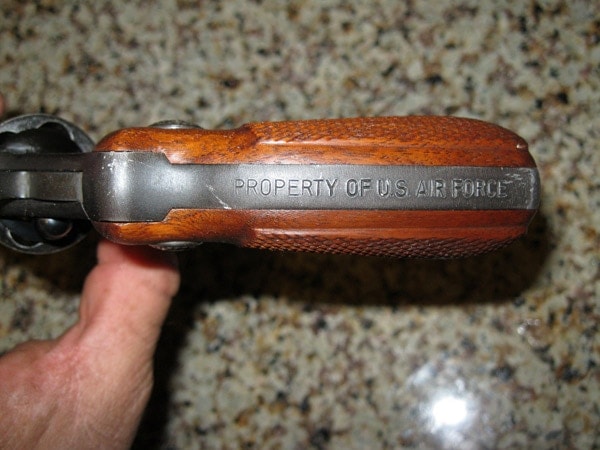 On authentic Aircrewman pistols, “Property of US Air Force” is marked along the backstrap.

numbered AF-1 and had been presented to General Vandenberg, but still it shows that the market is there for these once derided guns. Even unexceptional guns bring $3000-4000 due to their sheer rarity.

With prices such as these, it’s not hard to see why a few bad eggs try to fake them.  Always be wary when trying to buy the real deal. Sometimes Colt Cobras or Detective Special, worth about $300, are converted with fake serial numbers in the proper range and markings and given real or reproduced Aircrewman grips (stripped off many models before melting) to be passed off on unsuspecting buyers.

So, how do you spot a fake?  First, the frames and cylinders has to be aluminum, not steel. If either attracts a magnet, watch out as this Aircrewman is anything but. The barrel will be steel and marked as such. . Aircrewman fell in the Colt serial number range between 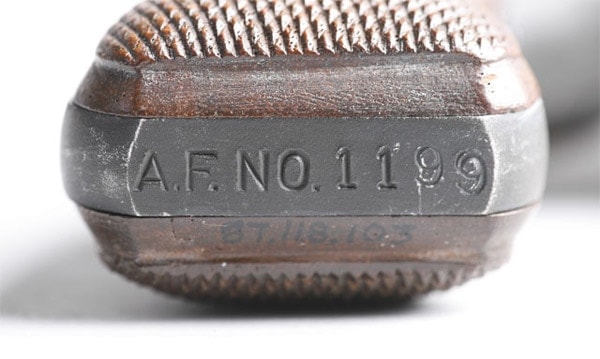 On the buttstrap of real Aircrewmen here will be a USAF-issued serial number between AF-1 and AF-1189.

2901LW and 7775LW. All authentic models will fall in this range. ‘Property of US Air Force” is marked along the backstrap and on the buttstrap is a second, USAF-issued serial number between “AF-1” and “AF-1189.” The original grips had silver buttons with the USAF crest inlaid in them. Remember, this was the big blue wonder of Curtis Lemay, and he expected his new service to have a little panache.

The original craft paper box, cleaning rod, and desiccant pack, all add to the value as does any documentation that supports how it escaped the great alumi-gun melt down of the Kennedy era.

Occasionally one will show up without the Air Force markings, which isn’t unusual if a new owner feared its legality and ground them off. In these cases, have the gun checked by an expert knowledgeable in Colts and always get a letter from Colt themselves vouching for the gun’s serial number.

And whatever you do, don’t shoot it.