Before You Buy a SIG DAK, Read This

Multiple police and government agencies are now using the SIG Sauer DAK trigger system.  Having shot the pistol extensively myself, I’ve got to the question, is it worth it? Has the robust and reliable SIG Sauer I learned to love lost its tactical edge with the DAK?

SIG Sauer is a household name and among modern fighting pistols, one of the best. In 1985, when the military went to the Beretta 95F, multiple organizations within the military also opted to purchase some SIG Sauer P226 and P229 DA/SA handguns as well. My first real introduction to the SIG was carrying a concealed P229 in 9mm while doing plainclothes military operations.

While the Beretta had its weakness in my opinion (namely, a dual safety/decocking lever that could get a guy killed if accidentally placed on “safe”), the Double-Action/Single-Action on the SIG had no real flaws as far as I could tell. It was robust, heavy-duty and reliable. There was no external safety then – and there isn’t any now – that the shooter had to manipulate on the SIG.

Working for militaries and law enforcement for most of my life, I’m not a fan of external safeties. External safeties (esp. mounted on the slide) just get in the way of immediate action malfunction recovery or ensuring the gun will go bang every time you draw your gun and pull the trigger. For shooters trained in good muzzle discipline and who keep their fingers off the trigger until they’re ready to fire, I soon learned that safeties for double action or DA/SA auto-loading pistols were, frankly, a hindrance.

Once I got out of the military, I had the option to carry a SIG Sauer P226 in either 9mm or .357 SIG as a police officer. Both options were DA/SA. Like the Beretta, the first shot with the SIG DA/SA was a longer trigger pull but it was slightly heavier than the single action follow up shots of my old piece. Regardless, I could make the gun sing.

SIGS in the air

After carrying a Glock on a government contract overseas, I was back to the SIG – this time with the post-9/11 Department of Homeland Security. As an undercover Federal Air Marshal (FAM) I was given the P229 DA/SA in .357 SIG, complete with Speer Gold Dot hollow point rounds. 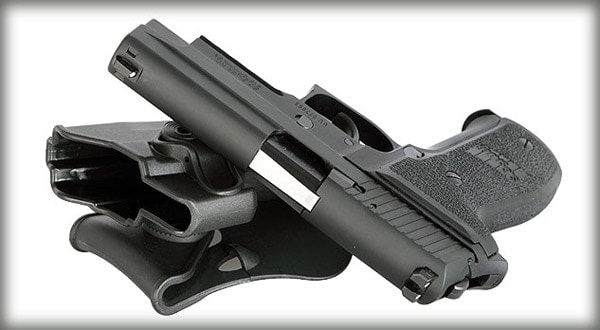 Obviously, any person knowing anything about linear assaults, hostage rescues and CQB tactics, realized that was a stupid choice. Had the 2006 shooting of Mr. Rigoberto Alpizar in the jetway of the Miami International Airport been onboard the plane, some people would have been shot, for sure. Two words come to mind: over-penetration. Talk about government oversight!

Before I left the agency for a better opportunity, I suggested FAMs immediately switch to a frangible round, such as the reduced Ricochet, Limited Penetration (RRLP) round. The Special-Agent-in-Charge tasked to investigate the ballistics disagreed with my assessment. Oh well. Just another reason I left. Well, that and the increasing influence of the U.S. Secret Service over the FAM Service.

The U.S. Secret Service carried the same round and the same gun (P226 DA/SA in .357 Sig). “Flying FAMs” were aggravated beyond belief that air marshal headquarters (directed by a retired SS agent) went to the media and told them the kinds of guns we carried, as well as some of the tactics we employed. If any 12-year-old kid could spot us, why not a terrorist?

Despite the poor management of the air marshal service back then, the gun was still tip-top. Air marshals, known as some of the best shooters in law enforcement, couldn’t afford to miss their targets. Static target shooting and dynamic tactical shooting qualifiers were difficult. With the SIG DA/SA, I was fortunate enough to take Top Gun, Steel on Steel Distinguished Shooter, as well as a Stress Competition Shooter award hosted by the field office. With a DA/SA trigger, that gun was very reliable. The trigger and trigger reset were ideal for quick, accurate shooting. For concealed carry, of course, the P226 was a bit too heavy, bulky and large, but SIG was and is a top-notch gun.

My latest experience with the SIG Sauer P226 hasn’t gone so well. Why? I point my finger at the DAK trigger system. DAK stands for Double Action Kellerman. Kellerman is (rumored to be) the wealthy man who invented the double action only (DAO) trigger. Interestingly enough, the DAK trigger is roughly only a 6.5-pound trigger pull. Like a DAO, the shooter will get that 6.5-pound pull consistently by releasing the trigger all the way back out for a full trigger reset. But the DAK is unique in that the trigger system allows a double-strike capability. In other words, there are two trigger resets and releasing the trigger half way will allow the shooter to take another shot with… an 8-pound trigger pull?

To my mind and shooting, the downsides to this configuration are numerous or at the very least something to look long and hard at when considering lives are on the line. For one thing, the trigger reset is way too far for me and that’s even with the 8-pound “half” reset. Going to the full trigger reset takes too much time and, to this combat veteran, speed is what matters in gunfights.

After exhaustive field testing of the DAK, as well as training shooters with the SIG platform, I’ve come to a couple of conclusions. First, due to the long trigger pull, shooters tend to dip or anticipate further with the DAK than on other guns with a shorter trigger pull. This makes their shots go low. Sure these same shooters may shoot low, push off or flinch, with other guns too, but the DAK/DAO exaggerates it. Novice shooters unintentionally using a “freeze sights” method really tend to shoot off from their intended target due to the long sweep of the trigger.

Secondly, the trigger reset seems backwards. I know that’s relative to the shooter, but when the bulk of my students have issues with it, I’d say the trigger is a bit counterintuitive. On a DA/SA, the first pull is long and heavier, and everything on single action is light. With the DAK trigger, if the shooter goes to the first reset, it’s heavier, harder and more difficult to pull or squeeze the trigger. Keeping the sights aligned and on target is no easy task for beginning or average shooters who aren’t shooting all the time.

But what about somebody with some experience? After shooting hundreds of rounds through the DAK as quickly as I could, I still couldn’t even get close to the speed of, say, a six-shot rhythm drill that I can with any other gun having a shorter trigger reset (e.g. Glock, Springfield XDM).

In a gunfight, shooting quickly and accurately matters! The difference between winning and losing may be a nanosecond and one fatal shot. A quick trigger reset matters for speed and a shorter trigger, as referenced above, matters for accuracy. Frankly, in my opinion, the DAK gives neither.

Like I said before, I really like (even prefer) SIG pistols and trust that the company knows what they are doing. So, why then are so many law enforcement and government entities going SIG DAK?

Perhaps the sales point is “with the long trigger pull, it will reduce the number of Accidental Discharges.” To that I say, “Teach shooters to keep their fingers off the trigger and out of the trigger guard until they’re ready to shoot and you’ll greatly reduce the chance of having any Negligent Discharges.”

Along the same lines, perhaps SIG Sauer reps have sold colossal contracts for the DAK to the Chicago Police Department, the U.S. Coast Guard, the State Department’s Diplomatic Security Service and numerous other organization heads based on the fact that “you won’t have to teach your officers to decock.” Decocking prior to moving or holstering will become “muscle memory” with a little practice. Additionally, whatever nuance decocking may entail is far outweighed by the fact that a DA/SA will allow fast follow-up shots on target, while offering greater accuracy for student shooters.

Or, perhaps so many organizations are going DAK because the sales pitch is to administrators who aren’t shooters. This seems likely to me.

In sum, if you can’t shoot the DAK well, you need practice and with practice you will be able to. But if you want to start practicing or carrying a gun for defense, I wouldn’t buy a DAK first. You’re far better off going with a Springfield 1911 or XDM, S&W M&P, Glock, SIG Sauer DA/SA (including the SIG with the Short Reset Trigger, SRT) – anything but a DAO or a DAK! Anything!

Until next time, continue to hone your skills and keep adding to your tactical toolbox