When the European continent rushed to its First World War in 1914, the United States remained neutral. By 1917, with German U-Boats sinking unarmed ships full of Americans and the Kaiser coaxing Mexico to invade the US with Imperial German arms, this neutrality ended.

The problem was that though the US had a lot of people, it also had a tiny army and needed many more guns if we were going to send millions of troops over there to fight the Huns. This led the military to start a fresh conversation with the firm of Smith and Wesson about handguns.

In early 1917 Smith and Wesson, had its second Model Hand Ejector revolver, a large frame gun similar to the N-frame series of today, already in wartime production (and 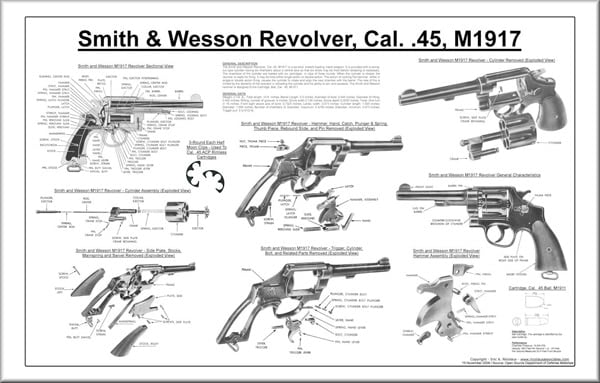 chambered in .455 Webley) for contracts to the British Army. The US Army’s standard pistol was the Browning-designed Colt .45ACP M1911 and upon their entrance in the Great War, they placed orders for as many 1911s as could be manufactured.  However a little math revealed that there would be a shortfall between how many men they needed in the field and how many 1911 pistols could be delivered from all production sources on time. Thinking outside the box, they asked S&W if they could redesign a revolver to fire the same .45 ACP round (of which they had many) and deliver thousands of them ASAP.

Smith and Wesson immediately knew their plan of attack; taking their Hand Ejector .455 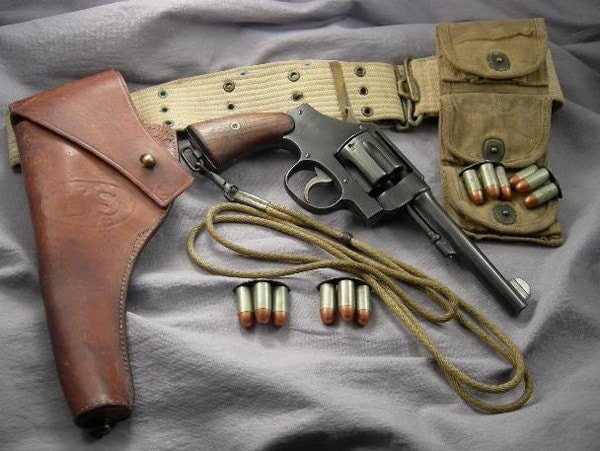 design and changing out the cylinder to accept the new caliber, they could be in production in weeks. Smith and Wesson proposed to the US Army a six shot double-action revolver with a solid frame and swing out cylinder to have a standard 5.5-inch barrel and a 10.8-inch overall length.

Since the .45ACP was a rimless cartridge meant to be fired in autoloading firearms with an ejector/extractor, the cylinder featured recesses machined into the face so that the rounds could be held securely while still having a safe headspace.  Like the early 1911s, all of the M1917s were made with a lanyard ring at the bottom of the grip so that soldiers would be less likely to lose them. Weighing in at 36-ounces it was very close to the same weight as the Colt 1911, held one round less, was considered by some to be more accurate with a slightly longer barrel/sight picture, reliable as any Smith and Wesson revolver and could be placed into production immediately. 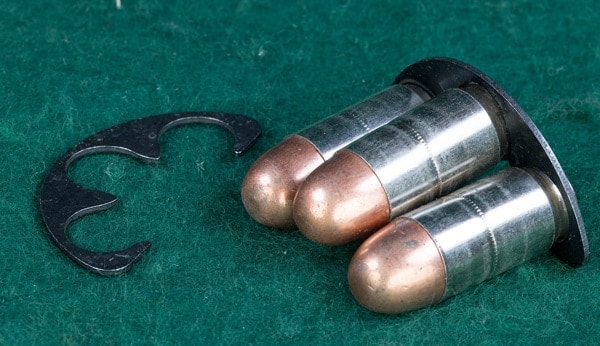 Half moon clips were used to accommodate .45 ACP cartridges.

The cylinder’s star extractor rod had nothing to hold onto to push the round out for reloading, so Smith added 3-shot steel clips that would hold loose rounds securely and could be reused. The entire clip was carried, loaded, and extracted as a unit. With the use of these half-moon and later full moon (that held six rounds) clips, the .45 ACP wheelgun was lightning fast to reload with practice. This fact holds up today with world record speed shooter Jerry Miculek using a Smith M625, the ultimate development of the M1917, to fire a dozen aimed shots from a six-shot revolver in 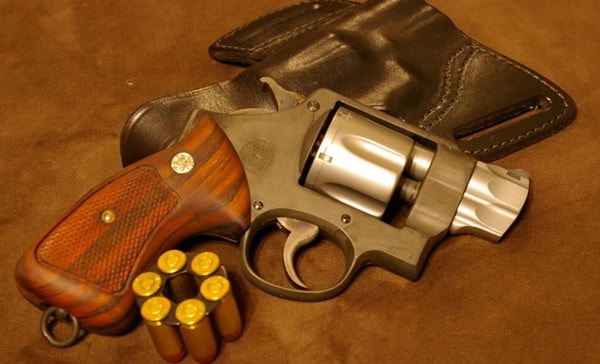 A much modified M1917. Note the original lanyard ring.

2.99-seconds. Importantly the gun could be loaded and fired without these clips present, however the rounds would have to be pulled-pushed out manually with fingernails and/or cleaning rods.

The factory was able to make the changes quick and by September 1917, they were shipping new .45ACP revolvers to the military.

The Colt model M1917 revolver, based on their 1909 New Service Model revolver is an altogether different gun based on the same concept—but that is another article.

Use and history of these guns

The Smith & Wesson M1917 made it into the army’s hands in time to equip the first Military Police units in France during WWI. 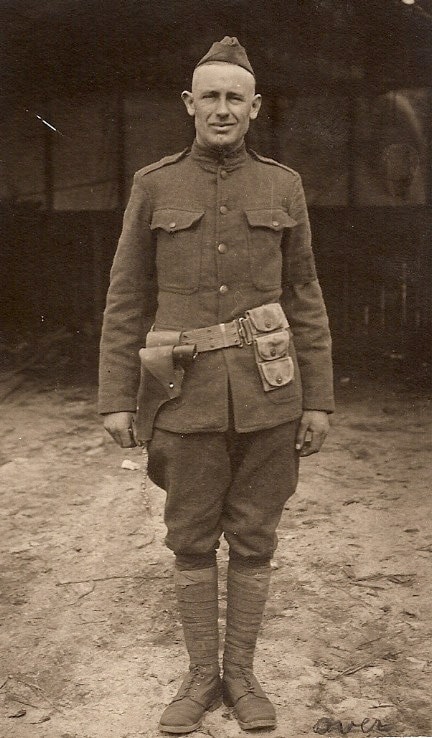 US ‘Doughboy’ with Smith and Wesson M1917 and pouches.

While it never replaced the standard M1911 Colt longslide, it saw significant service with 163,476 manufactured and a little over 130,000 shipped before the war ended in November 1918.  Almost immediately after WWI, the US military put the big Smith in storage as they had enough Colts to go around once it returned to its peacetime size.

During the 1920s and 30s several were loaned to other government departments such as the Postal Service and Treasury to help defend against robberies. Still others were sold as surplus. Those remaining in Uncle Sam’s closet were called out again in World War 2 and issued to front line troops. It was well liked in harsh climates due to its reliability, ease in cleaning, fast immediate action drill on misfires, and simplicity of training. Examples continued to show up in US soldiers’ holsters as late as the Vietnam conflict.

On the civilian market, S&W soon started selling the model commercially, with a better 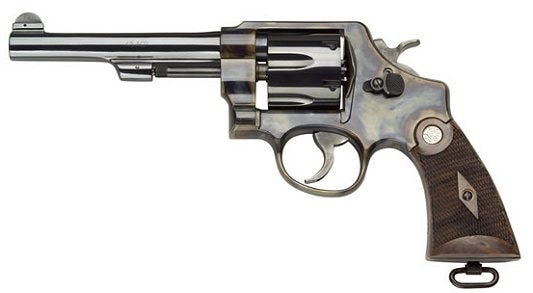 finish and checkered grips.  They found enough customers to keep the piece in and out of production until the 1940s by which point another 11,200 commercial model had entered the market. In 1920, Remington-Peters introduced the .45 Auto Rim cartridges, a .45ACP with a rim around the edge to work in the growing population of new and surplus Colt and S&W Model 1917s. The use of these rounds, still in production today by Corbon and others, eliminated the need for half-moon or full moon clips. Heck even that adventurer of the 1930s, the fictional Indiana Jones, chose to carry one.

In 1937, Brazil ordered from Smith and Wesson the M1917 for its Army. Dubbed in Brazilian service the Modelo 1937, they were assembled like the regular M1917s of the time with both some new production commercial grade parts as well as old stocks of WWI-era parts still in storage. Since they were built specifically for export they are marked with “Made in the USA” on the frame. Some 37,000 of these guns were assembled and shipped down to Brazil by 1946 where some still soldier on today in rural police units.

With more than 200,000 of these guns made 1917-1949, these beefy revolvers have always been on the common side. However, with the military regularly liquidating old 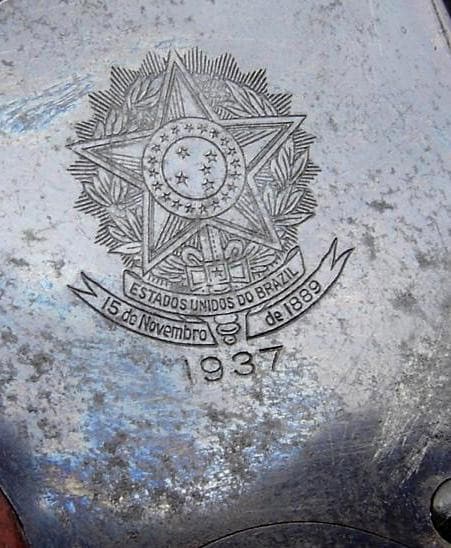 stocks of these from 1920-1975 and a cache of guns sold to Brazil being imported back to their homeland, there always seems to be trickle of these old soldiers showing up on the collectors circuit. As a large frame military revolver that is near impossible to destroy, S&W 1917s are both practical to own and an affordable collector’s item with those into surplus arms.

In excellent condition, military models (dull finish, smooth grips, GHS inspector marks on frame, flaming bomb marks, and US property marks under barrel) go for up to $750 while rarer commercial models (bright blue finish and checkered grips) for as much as $1K. Be sure to check for all matching serial numbers on the cylinder, yoke, barrel, and frame as this adds value. Brazilian contract reimports (you will see the import marks on the barrel and a Brazilian shield on the side plate) tend to go closer to the $500 mark. Field grade 1917s with poor finishes but are otherwise complete, run significantly less and regularly pop up for $400-$500.  You can still buy the gun in new in the box condition from Smith & Wesson, as part of their Classics series for a MSRP of $999. 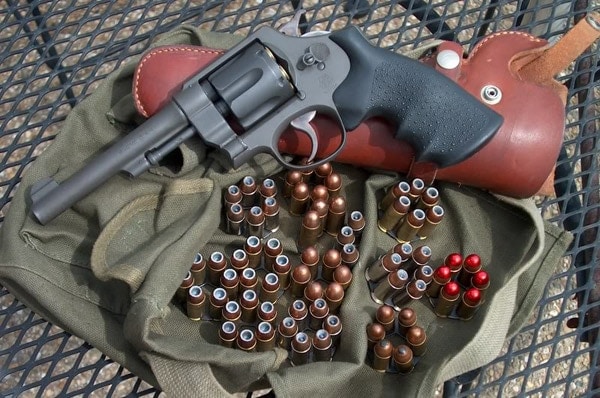 Since these guns have been available for pretty cheap on the civilian market for something like nine decades, there have been entire support groups of owners dedicated to modifying them. It’s not uncommon to get these guns with aftermarket grips, aftermarket sights, sawn barrels, cold blue finishes, chrome finishes, and any number of oddball tweaks by Mr. Bubba Q Dremel.

These non-standard guns are generally worth what one wants to pay for them with the average being a couple hundred bucks for guns that have been modified too far to restore. 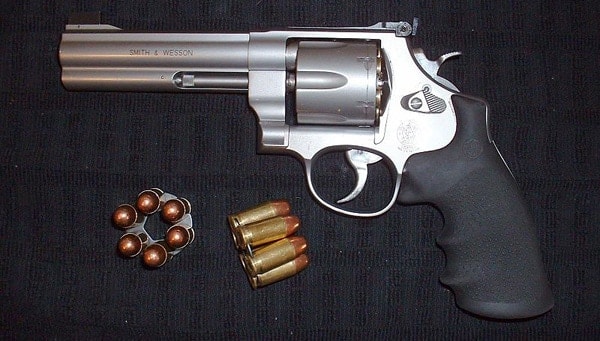 The interest shown in these ‘surplus’ guns led Smith and Wesson to design first the Model 1950 Target, then the Model 1955 Target in .45ACP complete with moon clips. From this led to the N-frame Model 25 -2 that was in production for nearly forty years. Today S&W still sells a stainless version of the Model 25, the 625 that has been produced since 1988. It still takes half and full moon clips and is still well liked. In fact, it seems that since 1917 there has been a .45ACP large frame revolver somewhere on S&Ws assembly line.

Not a bad legacy for a gun produced in an emergency to go up against the Kaiser.