Today many think that tiny guns like the NAA line of Mini-Revolvers and the arms of the American Derringer company are as small as a handgun can get in terms of practical self defense. If you count yourself in this camp, then perhaps you have never heard of Austrian firearms designer Franz Pfannl.

Born in 1867 in the small village of Stein, Austria, Pfannl accomplished something that will probably never be repeated. A watchmaker by trade, his trade showed in his work as this tinkerer created what many believe to be both the smallest semi-auto pistol and also the world’s smallest centerfire round: the 2.7 Grabner Selbstlade Pistole, firing the 2.7 x 9mm Kolibri cartridge.

In the 1900s, tiny guns were all the rage.  For decades, gun makers across Europe had sold dozens of models of concealable, personal protection guns including the Velo Dog pistols and concealable palm pistols, such as the French made Protector. 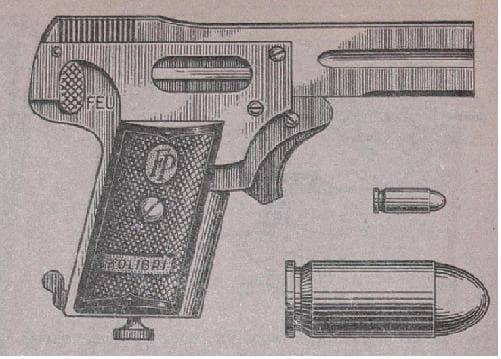 Popular among the ladies, John Browning even jumped on the bandwagon and invented the 25 ACP in 1905 for the express purpose to compete with these small, concealable guns.

At the time, ballistic profile was also becoming more important to shooters with some of the bestselling handguns for military and police use chambered in 7.65×17mm Browning SR (.32 ACP) and made by FN—considered akin to the 357 SIG of today.

The idea was small, ultra concealable handguns that could be carried in a purse, a vest pocket, or a small traveling bag. At a time when most criminals were armed with blunt impact weapons such as blackjacks, brass knuckles, and short clubs, any handgun was a great equalizer.

This brings us back to Franz Pfannl and …

In 1910, Pfannl patented a small bullet that he called the Kolibri, the German word for hummingbird. 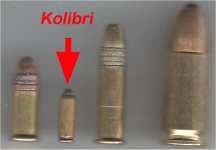 This is a super small round. In fact, its believed to be the smallest centerfire round ever placed into production as verified by both Barnes and Wilson. To get a grasp of just how small it is, if you line up a 22 rimfire Short on one side, and a 22LR on the other, then place a 2.7mm Kolibri in between these two rounds, it is half as long as the short and about one third the length of the LR. Overall length of a loaded round is 0.43 inches.

The centerfire primer alone fired the 3-grain, 10-caliber unjacketed lead bullet that headspaces at the chamber, generating a blistering 650-fps when it left the muzzle. The round only generated about 3ft/lbs of energy at its most powerful, which meant it could bounce off thick clothing. For reference, the 9.6-grain Gamo Rocket .177 caliber airgun pellet when fired from a quality air rifle at 800fps generates 17.92 ft. /lbs of energy.  A couple of shots to the face however, would be a serious (if not explicitly lethal) deterrent.

With his patent in hand, Pfannl went to an associate of his, Georg Grabner, and the two discussed putting both the round, and a handgun to fire it, into production.

With the 2.7x9mm Kolibri round patent secured, and Grabner putting up financing, 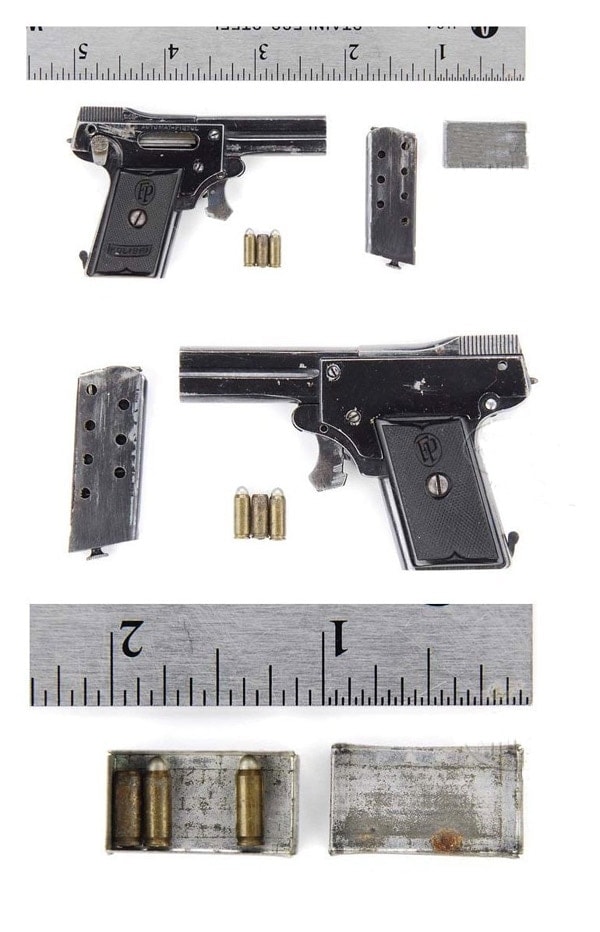 Pfannl went about designing his new Selbstlade Pistole around it. The gun was a single action semi-automatic that used a fixed barrel and reciprocating breechblock. Less than 3-inches long overall with a 1.25-inch smoothbore barrel, the cute little flea shooter weighed 7.7-ounces fully loaded with five rounds of ammunition in a detachable box magazine. At least the super small pistol held a respectable amount of ammunition for follow up shots.  Less than 1,000 of these pistols were manufactured before World War 1 interrupted Pfannl’s sales in 1914.

Not very satisfied with miniature pistols performance, Pfannl designed a larger 3mm gun (firing a 5.3-grain bullet) in the 1920s and produced his magnum opus, the 4mm Flobert, in 1925.  Unfortunately, Grabner’s factory located in Donau, Austria fell on hard times and closed by the end of decade, with the Kolibri being its most successful product.

Clean living and a love of tiny pistols apparently leads to a long life, and old Franz Pfannl lived until 1961 when he died at age 94. 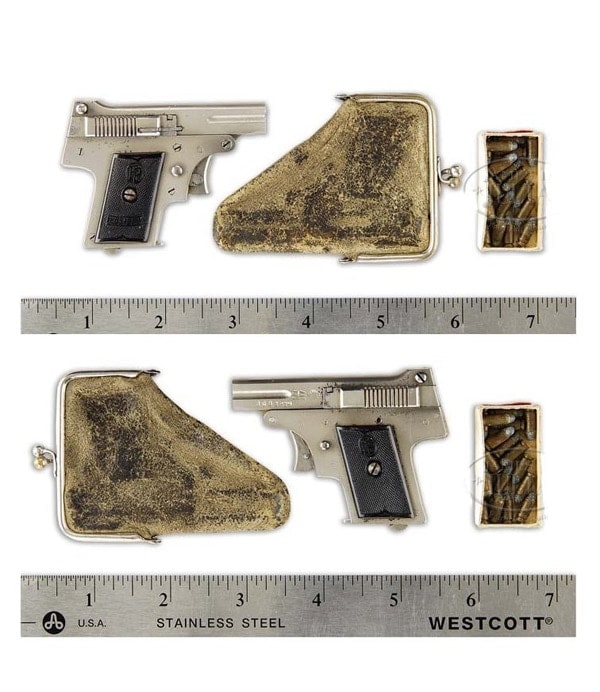 The Swiss Mini Gun, a revolver made apparently for use by sea monkey bodyguards and in current production by MTH, uses a 2.34mm x 6.1mm rimfire round, which is just a hair smaller than old Franz Pfannl’s Kolibri—but it’s a rimfire. Today wildcatters also have a penchant for making ultra-small rimfire rounds from necked down 22LR cases to include the .10 Squirrel and the .14 Jones, but to this day, the Austrian 2.7x9mm Kolibri round remains the tiniest production centerfire ever made.

These guns were made in a part of Europe that was torn to pieces by two world wars, a few wannabe revolutions, and Soviet occupation inside of just three decades. As such, you can be sure that of the thousand or so Kolibri pistols made, most were lost or destroyed. However, with so many foreign troops passing through central Europe in 1918, again in 1945, and beyond throughout the Cold war, the number of surviving pistols palmed by 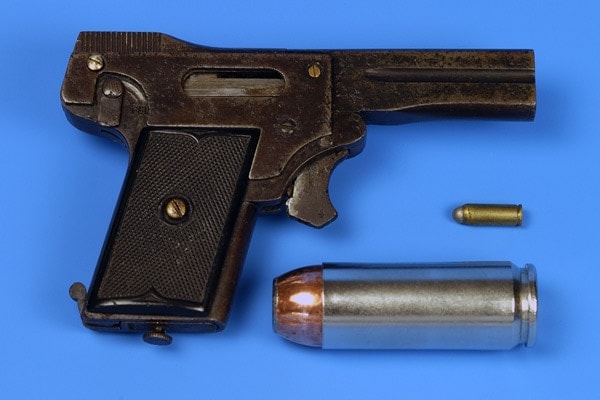 Kolibri pistol and round next to a .50 caliber Action Express (AE) bullet for comparison.

soldiers looking for a tiny souvenir is significant enough that they do appear from time to time on auction blocks and in the strangest of places around the world. As you may expect, these guns are a hot commodity for firearms collectors, especially those looking for the rarest curios.  With the moniker of the smallest production pistol ever made, the gun has an almost universal appeal to serious collectors.

So what comes next, should go without saying: if think you found one, do the research. These guns are often mistaken for toys, blank firing guns, or cigarette lighters. The gun will be marked ‘Kolibri’ and have a stylized ‘FP’ on the Bakelite (an early plastic) grips. The lever safety will say ‘Feu’ for fire and the slide should have an ‘N’ proof mark that shows it was nitro tested.

It’s not recorded what Pfaanl originally sold his guns for, but an exceptional Kolibri sold recently at auction for $3250 while another sold in 2010 for $4K . With that in mind, if you do stumble across one for a decent price, you may want to quietly pick it up.

It could literally be worth its weight in gold.