The Browning M2: All will kneel before the mother of 'Heavy Metal' (VIDEO)

Since the 1930s, the sound of American awesomeness on the battlefield has been played through the .50-caliber heavy machine gun. This gun, officially dubbed the M2 though cherished as the Ma Deuce or Mr. Deuce by our troops in the field, is the longest serving weapon in front line use in US military history.  If you ever have the privilege to fire one, it’s easy to see why.

During the last years of the Great War, known today as World War 1, the Germans of the Kaiser’s Imperial Army were using a huge 13.2mm round to stalk British tanks. This four-inch long shell was fired from a specially made Mauser elephant gun. 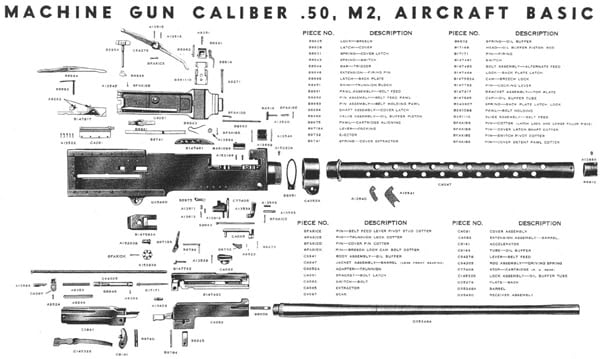 When shown the rounds these mammoth guns fired, John Browning, American firearms guru at large, knew that he could do better. Indeed Browning had kicked around the idea of a large-caliber version of his already adopted M1917 machinegun even before rumors of the German 13.2mm TuF round began trickling back from battlefields across the pond and the potential for such a device was not lost on him. Not only could such a large round be used to kill vehicles, it could also be used for suppressing ground troops at extreme ranges and for shooting both from and down aircraft. By 1918, Browning’s round, the .50 Caliber Browning Machine Gun (.50 BMG), known today as 12.7x99mm NATO, was ready.  He then set about designing a gun for it.

Design of the deuce

While the US government was willing to spend money during the war for weapons’ development, they turned the tap off (as is often the case) as soon as peace was evident.  As a result the teething process of the gun ended up taking over 15 years.

First, Browning took his M1917 .30.06 caliber machine gun and stretched everything out. This was the M1918 and if you never heard of it, that’s because it was never adopted. Next followed the water-cooled M1921. With a 36-inch barrel and an all-up weight of nearly 150-pounds with mounts, water, and ancillary equipment, it was a beast and never the intended weapon. Though Browning himself died in 1926, others picked up his work and from his notes finished the M2 in 1938.

The final product adopted by the Army and Navy that year was an air-cooled, belt-fed machine gun that fired in a short-recoil fashion from a closed bolt and it looked like the smaller Browning 1917/1919 that it was based on, only on steroids.  The gun even used the same timing gauge as well as common principals. Its 45-inch standard barrel had eight right-hand grooves that made three turns from breech to muzzle and weighed 24-pounds. For use with ground troops, it could be mounted on a low-profile tripod that stood less than two feet high, allowing for prone firing. It could be placed on a ring mount, on a pintel mount, or even on a powered double of quad mount such as the M45 Maxson either in its air-cooled or water-cooled variants. Furthermore, a stripped down version could be mounted directly inside the wings of fighter aircraft and fired via solenoid by a new generation of pilots. With more than 1,960,596 M2s made of all kinds during WWII, the gun’s legacy was secured.

According to the US Army’s Field Manual on the gun, “the M2 machine gun provides high-volume, long-range, automatic fires for the suppression or destruction of targets.” This is a colossal understatement. The gun and its .50 BMG round can penetrate 22mm of hard plate steel armor at 100-yards, which means it can literally destroy almost any vehicle found on the battlefield other than fully armored fighting vehicles and battle tanks. With a huge 800- grain bullet, it is perhaps the definitive word in ‘one-stop-shots’ when used against personnel. An effective range of 2000-meters, coupled with the capability to affect a beaten area as far as 6000-meters away with high angle indirect fire gives it god-like capabilities on a battlefield against enemy troops armed with anything smaller.

Use in the air 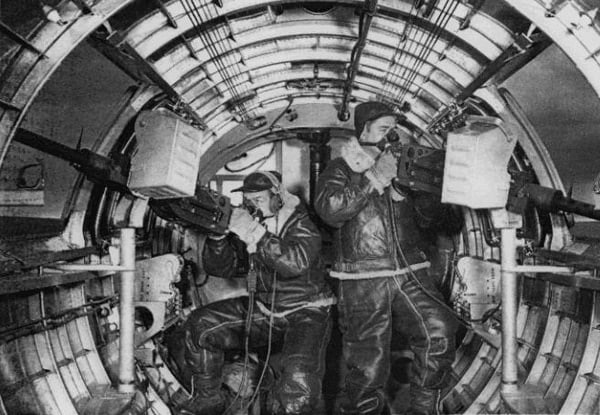 1939-55. From fighters like the P-51 Mustang and P-47 Thunderbolt to waist, tail and belly guns in B-17 bombers, it was the M2 that was ultimately responsible for almost every enemy plane shot down in aerial combat by the US in our 20th century wars. Even as the jet age thundered into existence, the M2 was still the main armament in the nose of F-86 Sabre jets and the tails of B-52 bombers as late as Vietnam.

Incidentally, and although popular in gun circles, the term ‘the whole nine yards’ did not come from the length of .50-cal ammo belts during WWII.

Mounted on the backs of Jeeps, halftracks, and atop tanks, the M2 has ridden into combat from Morocco in 1942 to Afghanistan today. What’s even more amazing is that it has done this without any major changes to its design.  Just as capable of shooting through a plaster and brick wall in 2004 Fallujah as it was a brick wall in Northern France in 1944, it is a definite crowd pleaser among US military operatives in urban terrain.

With an 800-grain bullet that delivers an incredible 14,000-ish ft. /lbs of energy on a target two clicks away, the 12.7mm round has been the default NATO standard for ground combat heavy machine guns for decades. It was with the M2 that super sniper Carlos Hathcock made his longest range confirmed kill at 2,286-yards in 1967. Today the military uses dedicated .50 cal rifles for long range sniping, but the Deuce is still there for when things go pear-shaped. 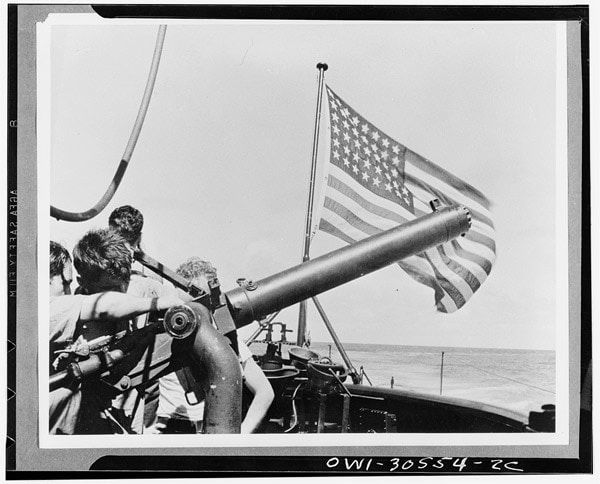 Water-cooled .50 caliber M2 machine gun on the deck of a submarine during WWII.

When the first bombs dropped at Pearl Harbor in World War 2, there were M2s mounted on Navy warships in the harbor that fired some of the first shots of the war. While the gun was increasingly replaced on larger ships, it was still used through the war on landing craft, PT boats, and on submarines in all theaters. The M2 could be used for firing at targets on the beach, for stitching up small boats stupid enough to sail into range and, crucially, for downing enemy aircraft.

A WWII era enemy aircraft approaching a ship at 200mph would be under fire for about 14 seconds if the gunner opened up at 1500-yards and with the 600rpm cyclic rate of the gun, he could potentially empty an entire 100-round belt ring into the pilots face. Today both the Navy and Coast Guard still use hundreds of M2s on everything from coastal patrol boats to aircraft carriers for much the same reasons as the old PT boats did. 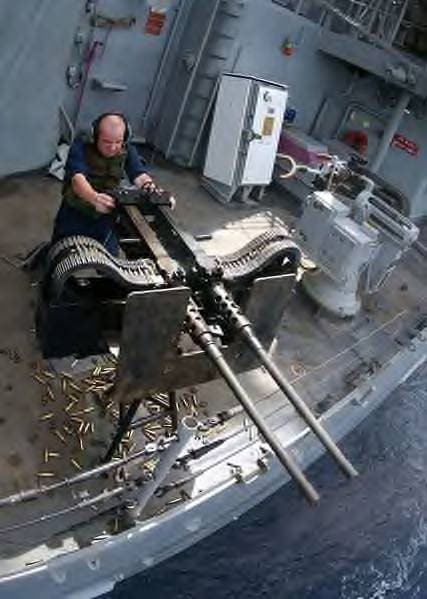 Since 2010, the M2A1, a modified version with a quick-change barrel, manual safety, and flash hider is preceding its older brothers at a cost of $14,000 a pop. While the barrel was always designed from the start with the capability to be replaced, the quick-change model does it without resetting the headspace and timing. In addition to new made guns, Gen Dyn will be supplying kits to rebuild older legacy M2s to the new standard. It stands to be the standard NATO heavy machinegun until a replacement is found that is worthy of being the new standard. Speaking of which…

In 2012, a British RAF P-40 Kittyhawk fighter was recovered from the Sahara desert where it had been since crashing there during World War 2. The plane, even after having spent 70 years exposed to the elements still had six working M2’s aboard. The Navy is mum on whether or not the guns on aircraft recovered in recent years from Lake Michigan are still functional, but civilian contractors who raised the aircraft said they still ‘looked great’. These guns are just plain reliable, durable, simple, and hard to break.

This however has not stopped the military from repeatedly striving to replace the M2 over the course of decade after decade. In the 1970s, FN designed a quick change-barrel modification to the Browning that the Army turned down because they were neck deep in the production of the M85 at the time. The M85 was designed by GE to be a better, lighter M2 that came in at 65-pounds and had a variable rate of fire, quick-change barrel, and flash suppressor but was operationally unreliable. Designed from 1952-1968, the military bought a few thousand of them for use in M60 tanks but by the 1990s had done away with them– replacing them in service with the very M2 it was designed to replace.

Once the M85 was toast, the Army went to designing first XM806 and then the XM307/XM312 advanced heavy weapon. Touted as being a 50-pound alternative to the M2, it uses a smart shell that is capable of doing everything but making you dinner on a Friday night. The thing is after nearly twenty years of R&D it hasn’t made it to the field yet, which means that for now the military’s 40,000-ish M2 variants will still service on until they find something better.

Apparently, they never heard the expression: if it ain’t broke, don’t fix it.