Samuel Colt is well known today as the father of the cartridge revolver but over the past 200 years, the company he founded has also made serious inroads into military rifle production, currently contracted to produce the M4 carbine for the Department of Defense. What you may not know is that Mr. Colt sought to sell the Army a carbine version of his famous revolvers long before the M4 was a glimmer in Eugene Stoner’s eye.

Why a revolving rifle? 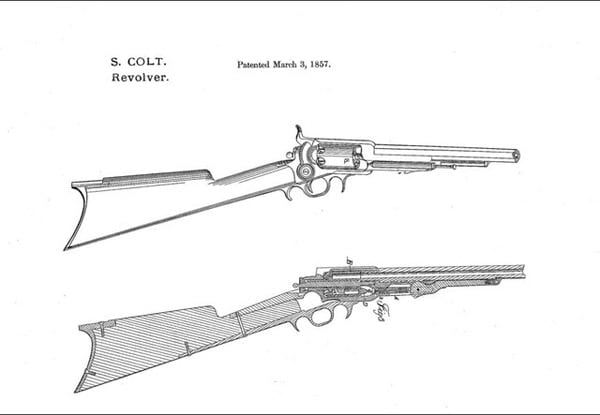 In the 1850s, the standard long arm of the time was the muzzle-loading musket. These guns took a well-trained expert shooter twenty breathless seconds to load and fire. Samuel Colt in 1836 patented his revolving-breech loading, folding trigger handgun named the Colt Paterson.

This revolver could deliver five shots in about as many seconds. After a series of sales to both the military and the discerning public, Colt began to explore the option of a rapid-fire rifle. Such a firearm could fire out to rifle range by using a longer barrel, but deliver the firepower of his proven revolver design.

The design of the Colt 1855 carbine

As one would imagine, at the heart of Colt’s rifle was his innovative revolver cylinder action. Whereas most Colt revolvers at the time were smaller calibers, either .36 or .44, the carbine was offered as a five-shot .56-caliber hogleg that spat out impressive 360-grain rounds propelled by black powder.

An optional version, with either the smaller six-shot .36 or .44 caliber cylinder and a matched barrel, was available. To complement the package and provide both long-range control and accuracy, barrels of 15-24 inches were fitted, as was a wooden buttstock. To increase the possibility of being able to hit out to 200-yards, tall ladder-type rear sights were fitted on the top strap of the receiver. To spur military sales, the front sight could accept a ring for a bayonet.

With his new rifle in production, Colt immediately turned to the military and offered it for sale.

Between 1856-1864 just under 5000 of these revolving carbines came off the assembly lines at Harford. Almost without exception, these were sold to either the United States Army proper, state troops volunteering for the Civil War, or individual soldiers and officers as personal weapons. Before the war broke out several had been purchased for use by the short-lived Pony Express service.

During the Civil War itself, such famous units as Berdan’s US Sharpshooters, the 21st 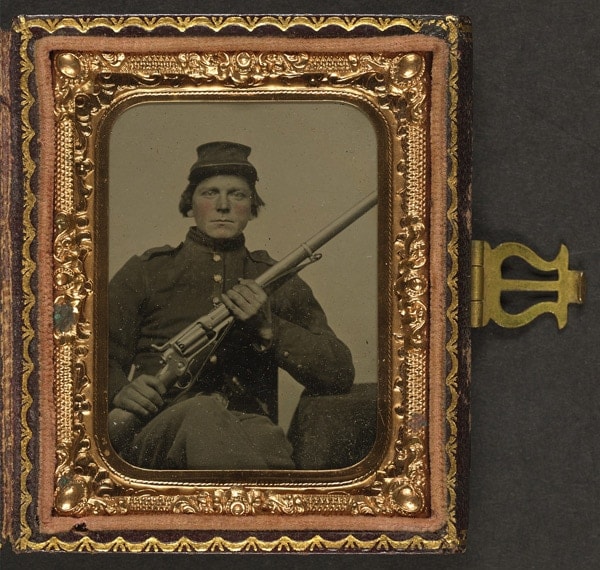 Ohio Infantry, and the 1st Colorado Cavalry (under John Chivington) and the 9th Illinois Cavalry carried the Model 1855 at one time or another. About 60 long-barreled Artillery models had also been stored in Southern arsenals before the Civil War. These found themselves in the hands of various Confederates.

The downfall of these guns was in fact their basic design. These guns were not through-cylinder revolvers, since Smith and Wesson held a patent on that technology. Instead, these were the more traditional cap and ball revolvers that required powder and a projectile to be loaded through the front of the cylinder, then a percussion cap placed on the rear before the gun could be fired. This type of arrangement led to the potential of 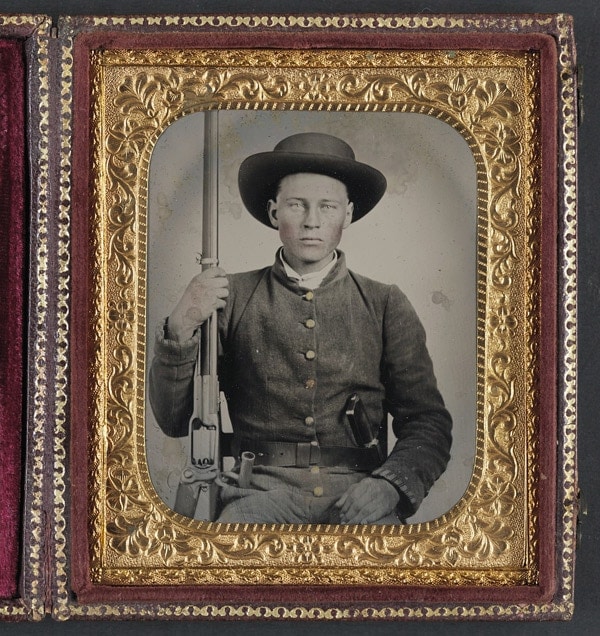 chain-fires in which the entire load could go off at once. Typically, a chain fire in a revolver was bad but could be walked away from. In a rifle set up like the Colt 1855 where at least one arm was in front of the cylinder for support, it was an accident that led to at least crippling or at worst death.

With this, the Army decreed that the gun only be loaded with a single cylinder, and this cylinder be kept aligned with the barrel. While this ended the threat of chain fire, it also ended the guns usefulness as a repeater and by 1865; the military ordered them sold as surplus for less than 1% of their $44 original cost. Of course, the logical answer of supporting the carbine under the cylinder and just forward of the trigger guard seemed to have escaped the Army.

These Colt rifles were sold cheap on the surplus market in the 1860s and mostly sold to new shooters in search of a bargain. This artificially low value applied to the guns meant that they were invariably pressed into hard service and, as such, few survive today in working or unaltered condition. When found thee guns run upwards of about $11,000.  However, if the carbine can be tied to the Pony Express, or to an individual soldier, officer, or unit during the Civil War, then this price can escalate dramatically. Rare models, such as the 100 or so so-called Artillery Rifles with 24-inch barrels are even pricier. Consequently, it’s a good idea if you ever come across any seemingly legit Colt revolving rifle for sale, do your homework and get it expertly appraised before making an offer. 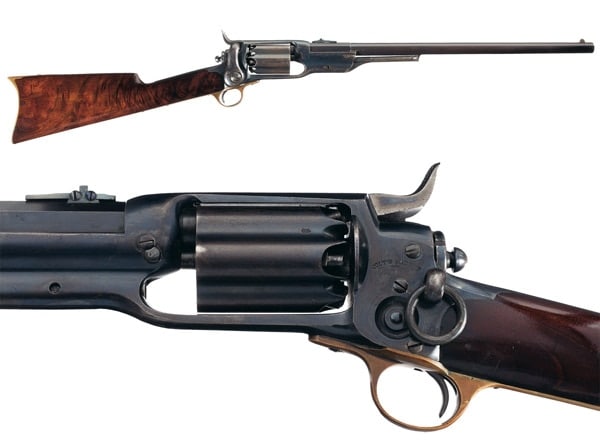 Overseas versions of the gun, licensed by Colt and made in Belgium and England, go for comparable prices.

Remington, starting in 1865, began production of a carbine version of their proven M1858 revolver that sold sporadically for twenty years and is often confused from a distance for the Colt. However, they are completely different rifles and the much more common Remington is outside the scope of this article. 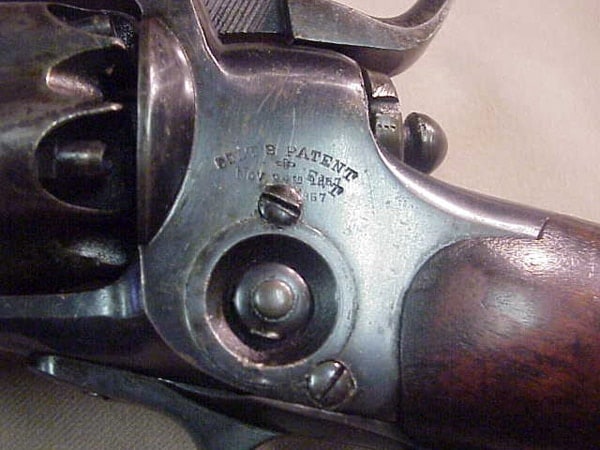 Today several different replicas are in production around the world of the Colt 1855. Denix in Spain makes a non-firing version for those collectors who like wall hangers starting at about $200. Dixie Arms imported an Italian-made live firing model with a six-shot .44-caliber cylinder for a few years but these are now rare and fetch about $1200. Palmetto Arms made a version briefly and if you can find one, reports state that they were very well built.

Just beware of that whole chain-fire thing. Moreover, watch where you put your hands.