The Baby Berettas: A tale of tip up barrels

They’ve been around now for almost seventy years—those little Beretta pocket pistols with the tip up barrels. Just what is the deal with those things and why would you want one? Keep reading.

Why a tip up barrel 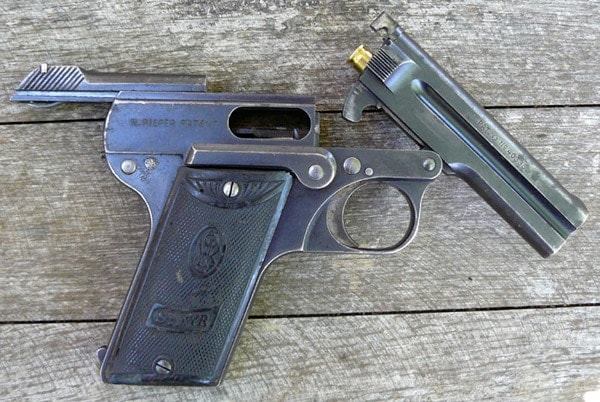 These small framed, Beretta pistols use a super simple blowback action. This also means the gun has a pretty stout recoil spring to keep the action pushed forward and a short slide—and this makes it hard for some to grip. To get around this, Beretta used a barrel with a pivot pin that pops up and out of battery when a latch is depressed. With the barrel tipped up, you can load, unload, reload, and check to see if you have a loaded chamber with the flick of the lever. The concept has long been used with one of the earliest examples seen on the 1908 Steyr 7.65mm pistol.

Introduced in 1950, Beretta came out with the Model 950B pistol. A single-action semi-auto with a 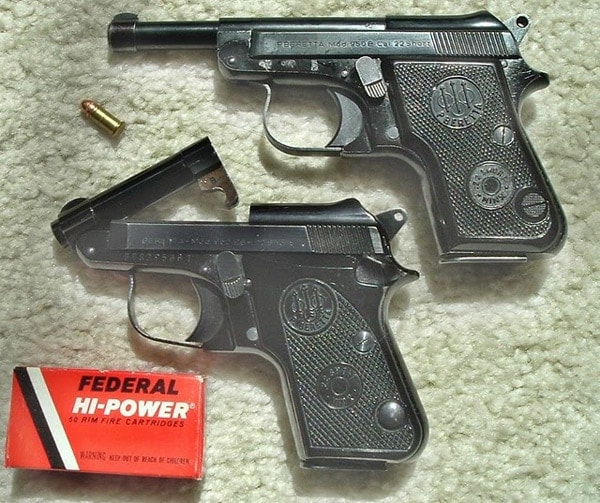 2.38-inch tip-up barrel, it had an overall length of 4.5-inches. Since the gun fired from a cocked hammer, the tip-up barrel made absolute sense from a safety perspective. Rather than use an extractor, the gun could pop spent casings strait up with the barrel tip lever, giving the gun the sometimes annoying habit of smacking the user with brass right in the forehead. The gun tipped the scales at a handy 9.5-ounces empty. Compare this today to the revolutionar-i-ly small Ruger LCP of 5.16-inches overall and 9.5- ounces, and you see why the 950 was a hit almost immediately.

In a .22 Short version with a seven shot single stack magazine, the Model 950 was called the Jetfire. This was by far the best received of the model and, at the time, boasted the best sales in the company’s history. Over the years, it became available in heavy blued or bright nickel finishes and with either plastic or wooden grips. Produced also in a 25 ACP version with a seven shot magazine, the .22 Short models were discontinued after 1992.

In 1968, when the Gun Control Act cut off imports of small framed pistols with ‘no sporting purpose’, the Jetfire was domestically made in the US from 1969-2002. 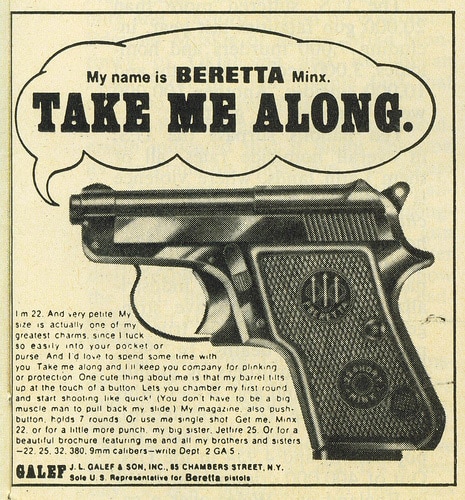 A six-shot magazine Model 950 was dubbed the Minx. It was never as popular as its half-brother and when it was banned from import in the 60s, Beretta dropped it. Any Minx you find will therefore be marked made in Italy.

In 1956 Beretta began marketing a long-barrel version of the Minx, designated the M4.  It was the same gun with the exception of having an extended 3.75-inch barrel (that still tipped up). It was discontinued in 1968 but revived in 1982 by Beretta USA with a 4-inch barrel as the unsuccessful Model 950BS.  For the record, don’t ask us what the BS designation stands for, we don’t know. Nonetheless, Pinocchio looking pistols were put to rest with the death of the entire 950 line in 2002. 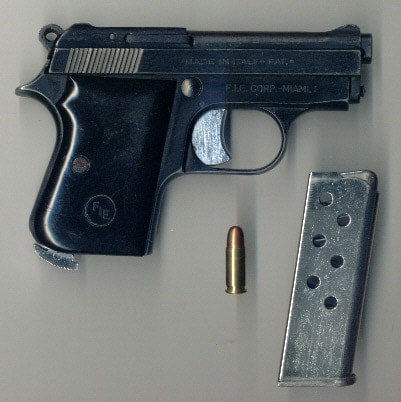 Besides the Berettas, there were a number of similar Italian pistols that the 950 inspired. From the 60s to the 80s the Italian firm of Tanfoglio made a crude imitation of the Beretta pocket pistols. Sold under various names including the E27, GT25, and FIE Titan, they were .25ACP pot metal frame guns that sold for about $50 on the high end. Reasonably reliable, they were often sold side by side as a cheaper alternative to the Minx. These guns have neither the quality, nor the tip-up barrels of the Beretta. 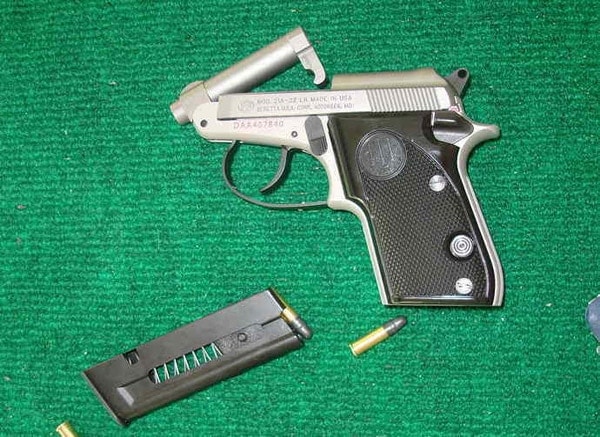 single-action design was dated and the company began to phase in a replacement. The double-action Model 21A, made in the US to avoid the GCA requirements for imported pistols, was slightly heavier at 11.5-ounces than the 950 but otherwise looks almost identical. Marketed as the Bobcat in gun catalogs throughout the US, it is still available in either a 7-shot 22LR, or an 8-shot 25 ACP. A slightly longer 2.5-inch barrel gives it an overall length of just a hair under 5-inches while a half cock and a thumb safety combo can bring the pocket cat to a better level of carry.

The Bobcat eventually killed off the classic 950 line and there appears to be plans to halt production anytime soon. 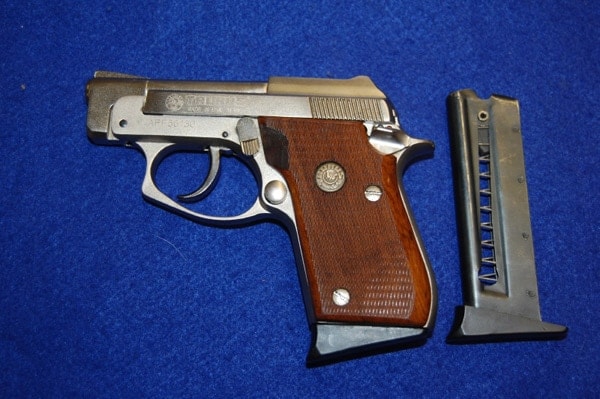 handguns. Many point to Taurus PT92/99 versions of the Beretta 92 as a witness to this. In 1992, this South American pistol maker couldn’t help themselves and introduced the PT22 and PT25 pistols.

Although these guns have a tip-up barrel, similar size, and styling to the Bobcat, they are completely different with no parts interchangeable. When compared in size, the Taurus guns are a bit bigger (5.5-inches overall, 12.5-ounces) but also cram two extra rounds in their .22LR gun, giving it a 9+1 capability. Made in the US to get around (stop me if you heard this before) the GCA of 1968, these are in current production.

Thousands of both Italian-made and US produced Beretta 950s are out there on the surplus market.

Most books of modern gun values list them all, no matter of vintage, for less than $200. In my mind, 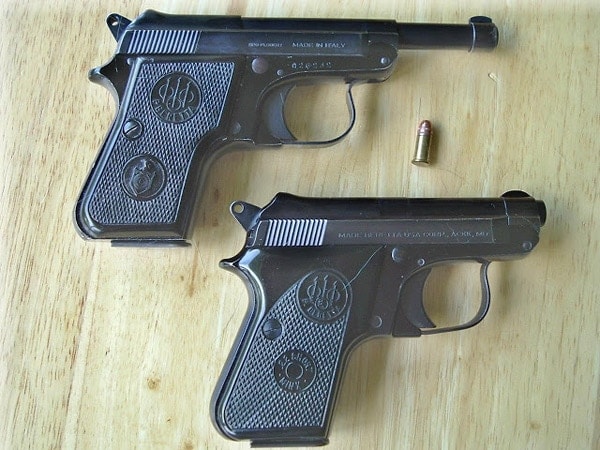 that’s a mistake and these guns will command higher prices in the years to come (if not already). While the design is dated, it is still relevant and both the magazines and parts are readily available. Additionally, the Italian guns have a little nicer bluing and if you can find one still in the snazzy white craft paper box it came in then you may have a future collectors’ piece.

Used Bobcats as well as Taurus PTs can be had for closer to $250 on the used market. You have to

remember that these guns are still very much in production and a quick look around gun shows will tell you the M21 NIB can be had for around $350 and the larger and unrelated Brazilians for slightly less.

Still, if a tip-up barrel appeals to you, and a small pocket pistol is on your list, any one of these should fit the bill.

And you can take that as a tip.