Before the Judge, There was the Thunder 5

I bet some of you thought that the Taurus Judge revolver was an earth-shattering innovation when you first saw it. I mean who couldn’t love a five-shot revolver that could hurl either .410 shotgun shells or .45 Long Colt as fast as you could pull the trigger?

Well, the thing is the Judge wasn’t first. The MIL Thunder 5 beat it by more than a decade.

But good luck finding one now.

Who was MIL Anyway?

MIL popped up in 1991 in Piney Flats, TN and made one product, the Thunder 5 revolver. Unlike almost every other firearms company in US history, it’s hard to dig into just who this company was. Manuals for the Thunder 5 are listed as being distributed by Dragun Enterprises with a Murfreesboro PO Box address.

SOTs information in the ATF’s archives comes back to Holston Inc., which is another dead end.

Here at Guns.com we like to tell you the story behind the gun, but it seems like this one was written on an etch-a-sketch.

Design of the Thunder 5 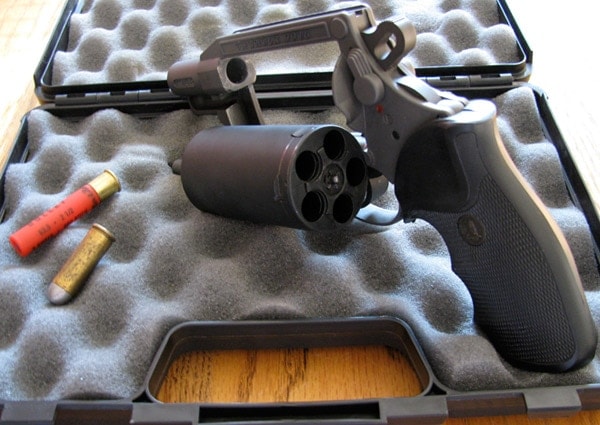 Big enough in fact to accommodate a three inch long .410-shotgun shell in the five shot cylinder. This put the gun at over nine inches long even as a snub-nosed revolver. Since the gun used a rifled barrel and not a smoothbore like a shotgun, it was classified as a legal handgun and not an illegal sawn off scattergun.

To tame some of the thunder, the guns came standard with Pachmayr decelerator grips. It was available in either a matte finish or bright stainless steel, for those special moments. 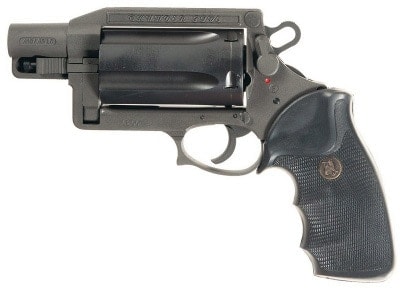 Not only could the standard revolver be used interchangeably with .410 shotgun shells or .45 Long Colt, but optional sleeve inserts allowed it to fire 9x19mm Parabellum, 38/357 and even the hotrod of handgun rounds—.38 Super. But all this interchangeability came with a price in the weight department. The T5 hit the scales, even with a 2-inch barrel, at a pocket busting 48-ounces.

Compare this to the 32-ounce weight of today’s Taurus Judge, and you see the overengineering that went into the T5. Of course, the original Judge just accepted a 2.5-inch .410, while the T5 went the full 3-inches, but that’s apples to oranges.

The overall project fleshed out, the gun hit the market in 1992 for about $200. When the gun failed to gain California compliance (what gun can?), an even sillier version, which used the same frame but was chambered in .45/70 was put into production that did.

Failure, Fade away, and Collectability

If you have ever watched the 1999 film Three Kings, about a gold heist during First Gulf War, the wingnut character PFC Conrad Vig (played by Spike Jonze) is waving around a huge revolver for most of the movie.

That silly hand cannon is a T5.  What else would you expect from the man who went on to be the co-founder of the Jackass franchise? Tragically, MIL seems to have folded before any influx of sales from the film could have helped them.

Thunder 5 making a cameo appearance in the movie Three Kings.

They had closed the doors in 1998 after a short and wild six-year run. It turned out that the guns were just too heavy, too clumsy, and adrift on a sea of Glocks, S&Ws and Berettas when it came to competition. Holston Inc., MIL Inc., and Dragun, etc. all mentioned at various times to be associated with the design, all quietly faded away.

For the past ten years the company’s former domain, www.thunder5.com, has been used just for cybersquatting.

Today the guns themselves, if you can find one, are oddly collectable for their almost cartoonish appearance and brief career. Beater guns start at close to $400 while minty versions with all the options bring twice that.

On the left hand side of the frame top strap will be ” Mil Inc., Piney Flats, TN” and on the right “Thunder Five” in a cursive script, making them easy to spot. Beware though; there are almost zero spare parts out there.

Of Judges and Dawgs

When Taurus heard that a few had been sold to judges in the Miami area, they capitalized on that bit of info and renamed the 4410 the Judge and the rest is history. In the end, the only thing surprising about the story is that Taurus didn’t call their gun the Lightning. I guess Judge was shorter. 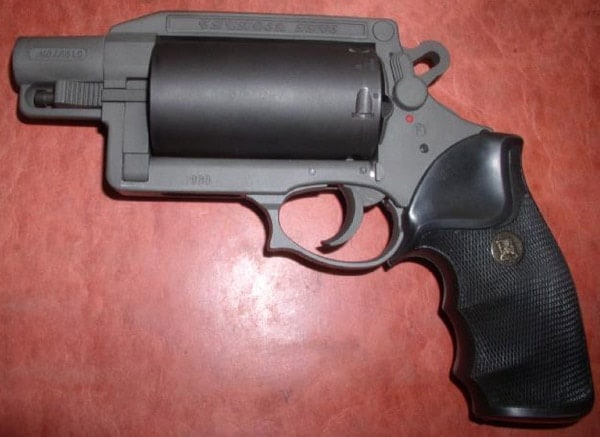 Thunder 5 revolvers have earned the reputation as fun collector’s items in recent years. Limited availability of replacement parts may ensure higher prices in the future.

Boje Cornils, the firearms designer behind BC Custom Engineering in Russellville, TN, had been making a few fully custom “Das BC” revolvers for customers who want an improved T5.

And the story doesn’t end there. At the 2011 Shot Show, Charter Arms demoed a gun that was a dead ringer for the old T5. Called the Big Dawg, it did not get many preorders and the company still doesn’t list it on the products page two years later. 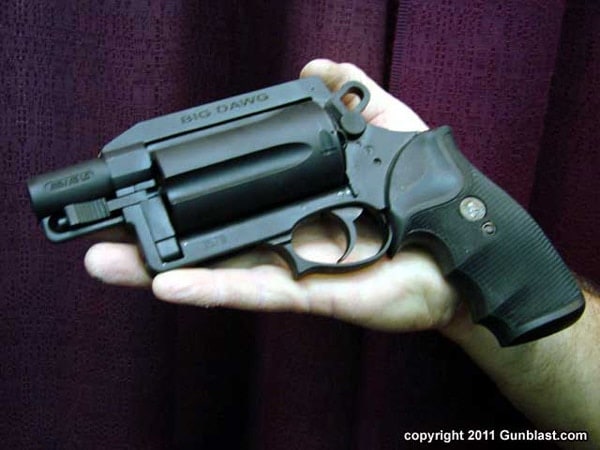 Maybe they decided to leave the heavy lifting to the Brazilians.