You are a 19-year old US sailor in the Pacific in 1944 and you hear the characteristic drone of an approaching radial engine fighter aircraft cuts through the thick heat of the salt air. You look up and see the red ‘meatball’ markings on the wings and your heart sinks as you realize it’s one of ‘theirs’ and, more importantly, it’s a racing strait towards you at over 300-miles per hour. Luckily, you have a mother-freaking gorgeous 20mm Oerlikon pressed against your shoulders and the most advanced gun sight of its day to help make sure the kamikaze doesn’t run right down your throat

Origins of the Oerlikon 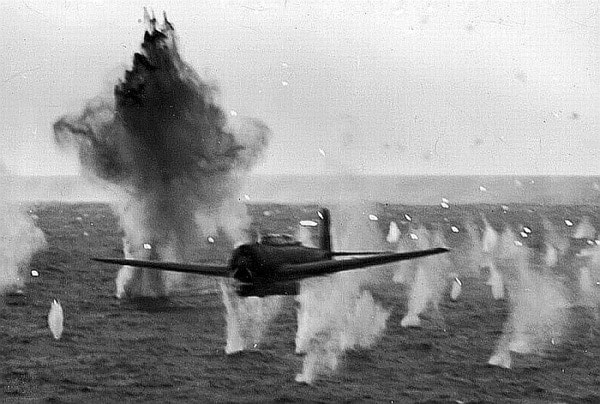 Kamikaze attack on the USS Yorktown.

Back in 1918, German arms engineer Reinhold Becker came up with a 20x80mm round that fired using primer ignition blowback in a very large machine gun to fire at 300-rounds per minute. This gun was to be used to help sweep the sky of the Western Front of those pesky thousands of American, British, and French biplanes in the last year of World War 1. Too bad for Becker, (not to mention the Kaiser) the guns were never made in enough numbers to affect the war and his design was shelved.

In 1934 the Swiss based company of Oerlikon Contraves (Oerlikon being the name of the town the factory was located in and contra-aves being Latin for “against birds”) dusted off Becker’s design and super-sized it to be able to better shoot down the more modern fighters of the 1930s.

This gun, typically just referred to as the 20mm Oerlikon, became perhaps one of the most effective AAA (antiaircraft artillery) cannons of World War 2.

Oerlikon Contraves took the design of the SEMAG; a larger version of Becker’s earlier gun chambered in 20x100RB and started a redesign. The final product used a simple blowback action, like the M1A1 Thompson and M3 Grease Gun to cycle. This required the use of a very heavy (to retard the recoil) open bolt without a locking lug  as well as a huge spring (that weighed six pounds) that would push the bolt forward again after the round fired. This design cuts out gas impingement, piston rods, and even separate firing pins, creating a very simple action that is hard to break and what this meant was that the gun would run dirty, frozen, wet, unlubricated, full of blood, or encrusted with sea salt when others wouldn’t. Think of an all-steel 20mm Hi-Point Carbine that fired full auto from an open bolt and you have the basic design in mind.

In its final version, pitched in the late 1930s to the British and US Navies (as well as to the Germans and Japanese), the Oerlikon had been upgraded to the 20x110RB round at up to 450-rounds per minute. This huge 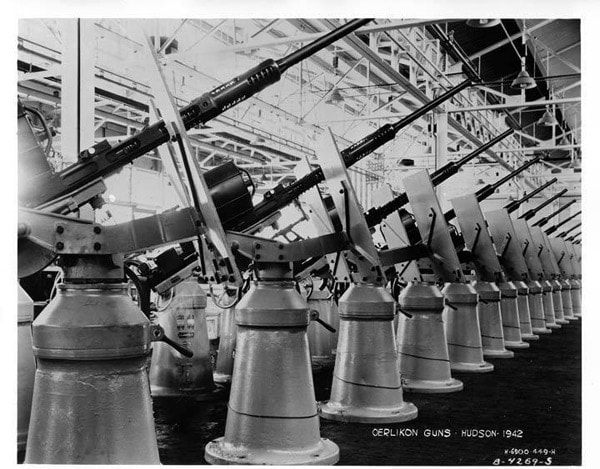 7-inch long, half-pound round used a 400-grain charge of IMR 4831 smokeless powder to propel a 2,000-grain  projectile at 2,800 feet (850 meters) per second through a 55-inch long 9-groove barrel. For comparisons, this round is about three times as heavy as the .50 BMG round fired by the M2 heavy machine gun.  Produced in no less than 11 different loadings it could reach out to one mile away.

These cannon were not what you could consider ‘portable’. Weighing in at nearly 150-pounds with rather serious recoil, the gun could not be carried by a light vehicle let alone a squad of soldiers. The main use was in mounting it to ships at sea for the purpose of stitching up surface targets like small boats and shooting down attacking aircraft. In a pinch, they could also be used to suppress fire ashore on the beaches if the ship was brought in close enough. 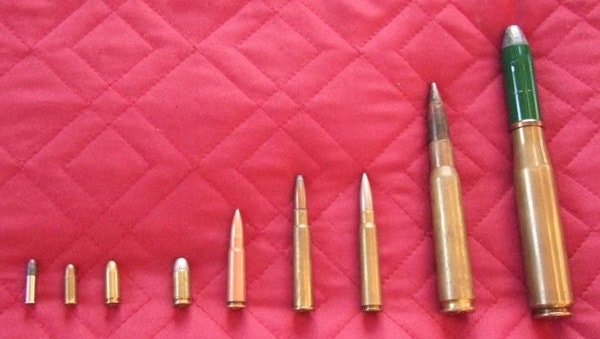 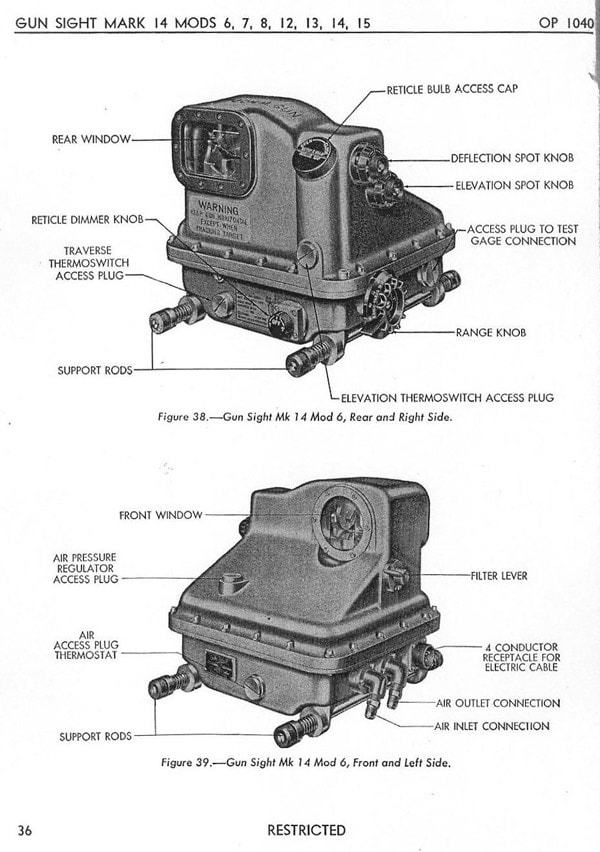 Mk 14 gunsite. This 1941 gyro stabilized optic was designed by MIT and was considered very cutting edge for the era.

The US Navy had just a few hundred of these guns on hand when the Japanese struck Pearl Harbor on December 7, 1941. Unlike many overseas made guns that used a belt, the US Navy’s model used a distinctive 60-round spring loaded drum magazine on the top of the gun. By distributing the plans and letting contracts go to numerous automobile manufacturers including Hudson and General Motors, more than 120,000 of the guns were made before the end of the war. Coupled with the MIT-designed electric Mark 14 electric gunsight that triangulated an aiming point on a rapidly approaching aircraft stabilized by two internal gyros, it was one of the most advanced weapons of its day.

The hardy 20mm Oerlikon was mounted on everything from tugboats and minesweepers to aircraft carriers. Usually manned by a five-man crew, it could be fired by a single sailor in a pinch—and often was. In post-war studies it was found that no less than one third of the Japanese aircraft shot down over the Pacific were down so by the German-invented, Swiss-perfected, US-built Oerlikon.

The gun was also well used by the British, Soviets, and numerous other nations during the war. The Japanese themselves even used the design (as the Type 99 auto-cannon), which led to something of a Twilight Zone scenario; while US Navy Oerlikon gunners were firing at Japanese A6M Zero fighter planes (that carried their own Oerlikons) Japanese Navy Oerlikon gunners were using their nearly identical gun to fire at US Navy planes.

Rapidly after 1945, jet planes replaced prop driven ones and an era of anti-aircraft missiles replaced the artillery such as the 20mm cannon. The US Navy rapidly discarded and scrapped their 20mm guns in service throughout the Cold War, just keeping a few around after 1955 for use against small boats. This led to the very same service having to buy some 5,000 belt fed 20mm Swiss Hispano-Suiza HS404, dubbed the Mk16, for use during Vietnam since the supply of Oerlikons available was limited. Let that be a lesson in throwing away gently used guns! 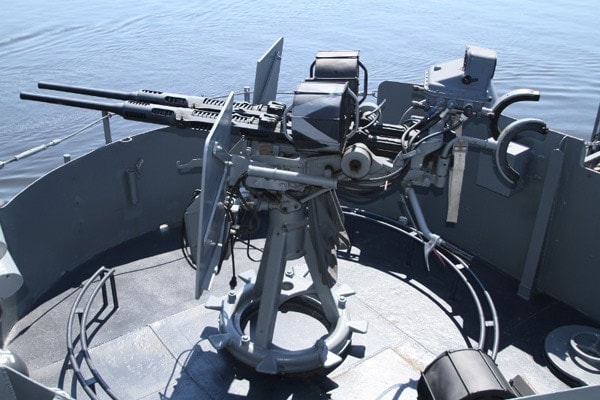 Today there are still a few operational Oerlikons, nearly 70-years old, that are afloat with the navies of Bangladesh, the Philippines, Taiwan, and Honduras as others. 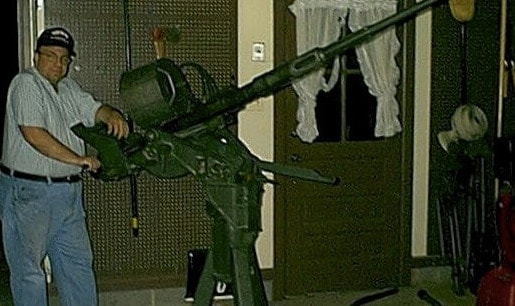 A 20mm Ok on the home defense market. Being both a Destructive device and fully automatic, only a handful of these weapons are transferable.

When the Navy liquidated their huge supply of Oerlikons in the 1950s, most were scrapped, some were sent overseas to allies, and a precious few wound up on the civilian market as transferable Class III weapons. These guns are both Destructive Devices (since they are larger than .50 caliber) and fully auto, which is a double whammy under the NFA, so if you have one, good for you, and if you want one, get ready for a journey. This doesn’t mean that they aren’t available though, just pretty strictly regulated.

Oerlikons appear occasionally in full-auto shoots and those who have them rarely sell these WWII kamikaze-getters. When they do appear, they often run north of $35K if working and transferable. This leads to a moment of pause when you realize that there are still a few out there capable of home defense.

These working pieces are favorites with Hollywood prop masters and have appeared in dozens of films over the decades (sometimes mocked up with acetylene gas internals) whenever a brutal cannon is needed. Most recently, in the movie the Postman, Kevin Costner’s post-apocalyptic film, The Holnists use an Oerlikon 20mm Cannon to destroy the fictional town of Benning.

Foreign models, such as the British Polston version, seem to be more common and a working Japanese Type 99 showed up in a recent Sons of Guns episode. Outfits like IMA sell rusty old 20mm Oerlikon barrels from time to time for about $300 and there are support groups out there for those who collect and build both non-functional and single shot variants. 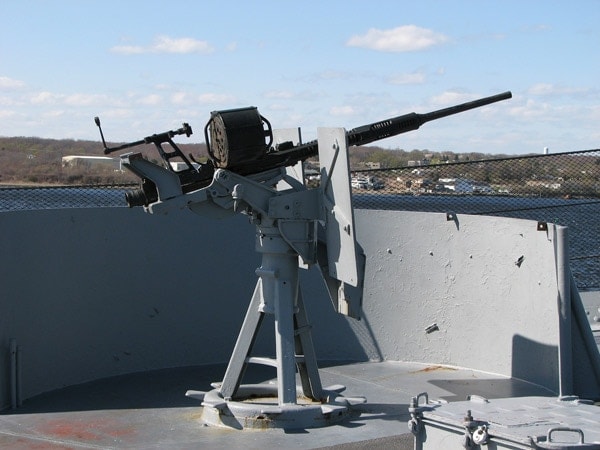 For those with less money to spend, the good news is that there are dozens of WWII-era retired US Navy museum ships around the country, such as the USS Kidd, USS Alabama, USS Massachusetts and others that have (non-functional) Oerlikon that you can pose the kids with for the price of admission. 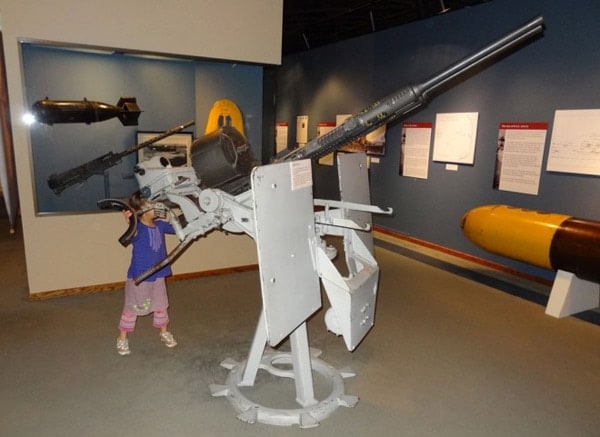 20mm Oerlikon 20mm AAA gun from the USS Missouri on display at museum.

And when the kids are done, you can take one for a spin as well.

Just watch out for low-flying Zeros.