Take a Walther PP, give it a two-stage trigger (with the first stage located on the front of the grip), make it a gas-piston operated, striker-fired 9mm and what do you get? Well, if you have been following along at home with your scorecards you may have figured it out it’s the HKP7.

When this gun was first introduced it was one of the most unique handgun designs out there and since then it has inspired a simmering love-hate relationship in the gun community lasting for almost 40-years.

Why it was created

German police for much of the 20th Century used very innovative pistol designs. Indeed, the “PP” in Walther PP stands for Polizeipistole (Police Pistol) and by the 1970s, their stock of Walther PP/PPK/P1 pistols, in the 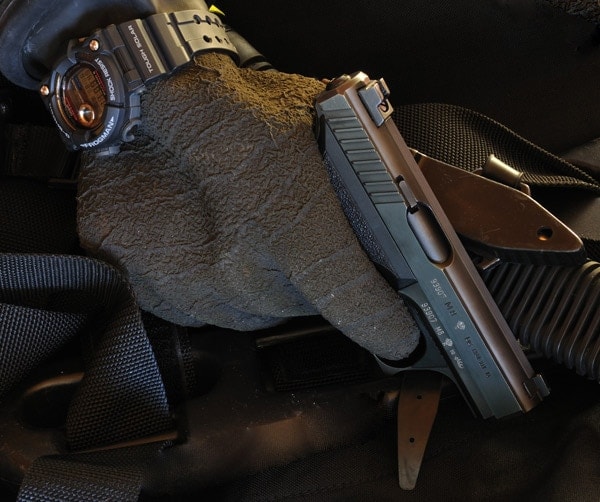 HKP7 in a gloved hand.

hands of the dozens of large law enforcement agencies across the capitalist side of the country, were wearing out. In response, the West German government held a series of trials for local gun makers to submit replacement guns and Walther, Sauer, and Heckler and Koch all came up with guns that met the design specifics (enhanced safety features, chambered in 9x19mm Parabellum, etc.). The Germans gave the Walther design the designation P5; the Sauer made gun (a license built version of the SIG P225) the P6, and the HK gun the P7.

And the HK P7 met all of the requirements and then some.

A unique combination of features

The design of HK’s PSP (Polizei Selbstlade Pistole– Police Selfloading Pistol), the gun that became the P7, fell into the capable hands of Mr. Helmut Weldle. Welde had worked before on several HK designs including the VP70 (the world’s first polymer production handgun) and the HK4. On the HK4, the gun had a ‘squeeze-cocker’ on the rear of the grip. This device cocked the internal striker of the pistol and gave it an exceptionally light single-action trigger. While the HK4 never was marketed, Helmut recycled the squeeze-cocker for his new gun, this time putting it on the front of the grip. 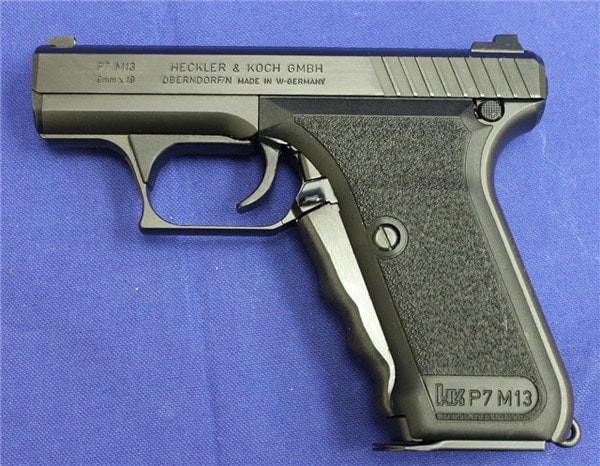 Since the device is the pre-set for the trigger itself, it also serves as a safety lever as the trigger cannot be pulled without squeezing the cocker into place. The squeeze cocker requires about 12-pounds of force to close, a feat that is easily accomplished if the user has the proper grip. Once closed, the trigger is ready to fire with a very light (4.5 or 1.5-pound) trigger that has a short reset.

The gun itself is a strait blowback design that fires from a fixed barrel similar to the Walther PPK. This contributes to extreme accuracy. A single-stack 8-shot magazine was standard although a later version, the P7M13 held a double stack 13-rounder. 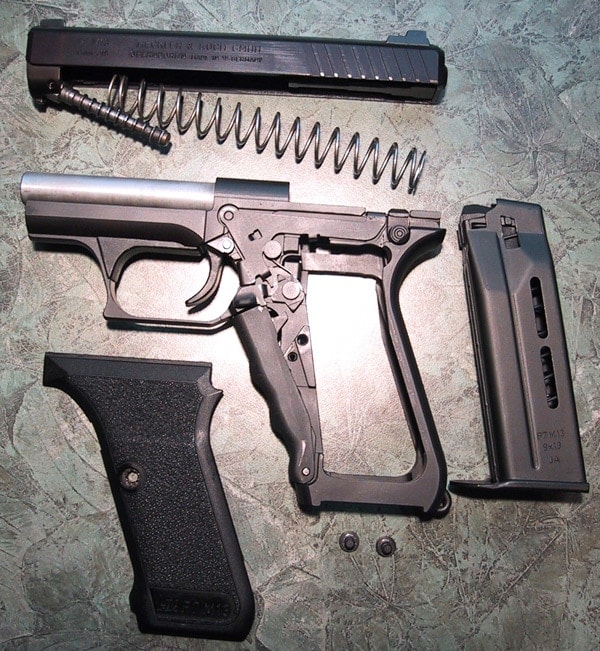 HKP7 M13 disassembled. The pivoting piece hanging from the front of the slide is a gas piston (go ahead and try to find another factory pistol with one of those). 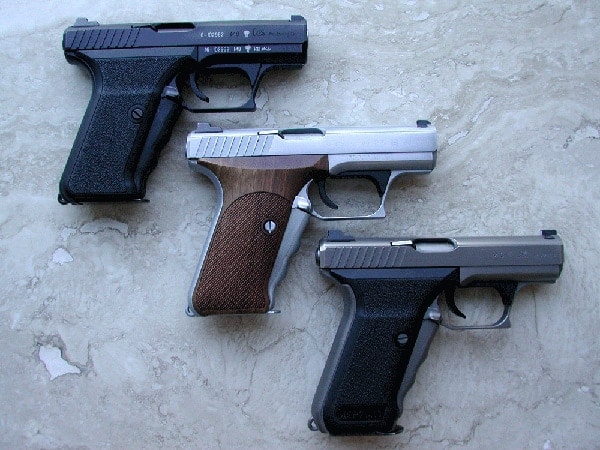 A nice sample of HKP7 variants.

be forced back by the excess pressure created when the round fires and means there is no need for an extractor—the spent case is chucked with a good bit of force behind it, well clear of the ejection port. This means fewer moving parts, less to break, greater functionality, and impressive reliability.

Weighing in at 27.7-ounces with a polygonal rifled 4.1 -inch barrel, the overall length of the pistol was just 6.1-inches. A very low bore axis (similar to a Glock) translates to super mild recoil especially when coupled with the 9mm cartridge and an all-steel frame.  Also similar to the Glock, but predating that Austrian gun by half dozen years, the P7 was striker fired.

The gun went into production first in 1979 and, while well received by law enforcement in West Germany, more departments there tended to go for the Sig-Sauer P225/P6 series than either the more expensive Walther P5 or the HKP7. Notably however, several German counter-terrorist teams (with larger budgets) adopted the P7 as did the German Army Special forces (KSK Kommando Spezialkräfte). 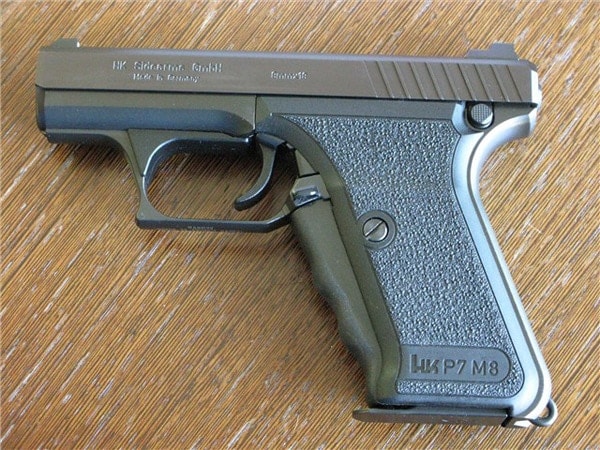 In 1983, the company found a small measure of success in selling a modified version in the US, the P7M8. The main difference with this gun over the original was in the location of the magazine release. In the early ‘80s, HK 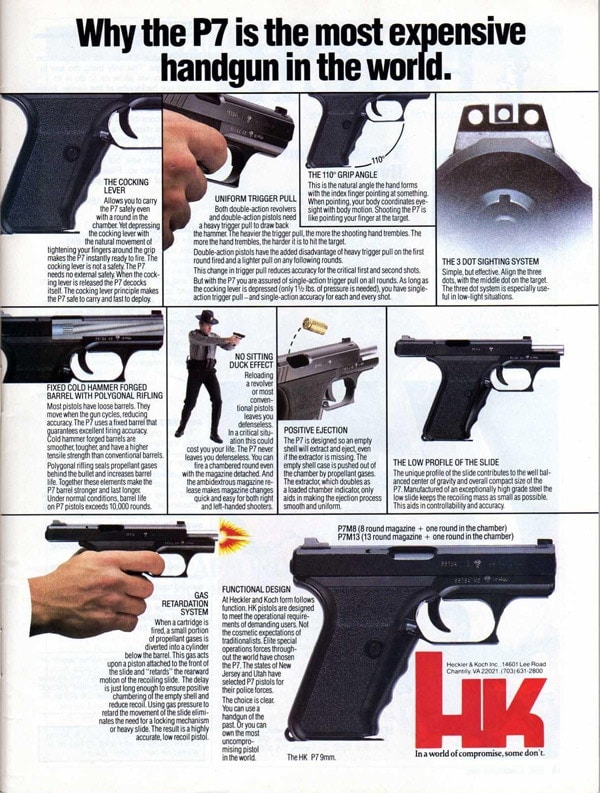 Divided reception aside, HK never really marketed the gun right. Who really wants to buy the world’s most expensive gun?

sold more than 3,000 of the guns to the New Jersey State Police who carried them for twenty years (replaced by the SIG P228 in 2003). The NJSP was the largest LE customer in the US and the gun never really caught on with cops in the states.

Commercial sales, largely due to the gun’s high cost when compared to other offerings, were steady but never breathtaking. HK flirted with a .40 S&W offering (the P7M10) and a double-stack 9mm (P7M13) to try to turn this around sales but ultimately failed. It would seem that though the gun was close to mechanically perfect it’s always been a hard sell.

These guns, with their unique squeeze-cocking lever, require a good bit of range time (and a proper grip) to cock and keep cocked. With the locked barrel and low bore axis, they heated up very fast in extended shooting and just were not enjoyable after a box or two of rounds, keeping plinkers and match shooters away. For occasional shooters who had cut their teeth on more conventional designs, the HKP7 was often too much to get used to. In law enforcement and military sales, the gun consistently lost sales to cheaper Glocks, Berettas, and S&W guns that were also less complicated to operate.

These guns are stunningly accurate, solid, utterly reliable, and have an overall interesting design. Their sleek, clean lines have long set the P7 aside as something of a gentleman’s gun. All of these factors combined make the guns extremely collectable both as shooters and as curiosity pieces. Today they run wildly from ‘plumb-colored’ PSPs in good condition for $600 to minty P7M13s that start at the $2K mark. 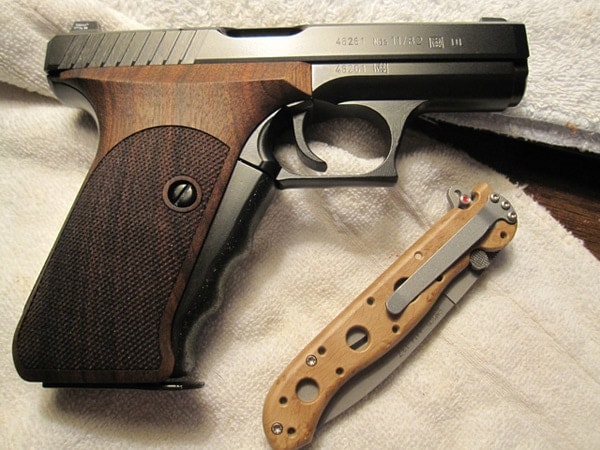 The HKP7 has the reputation today as something of a BBQ or gentleman’s gun.

One by one, the variants went out of production starting with the PSP in 1986, continuing with the P7K3, and finally followed by the P7M10/13/8 with the last guns coming off the line in 2008. A Limited Lifetime Warranty covers all new HK firearms sold in the USA for the original owner and the company still stocks parts for all but the P7K3 variant of these guns, which means that support is still available in one way or another at least for now. 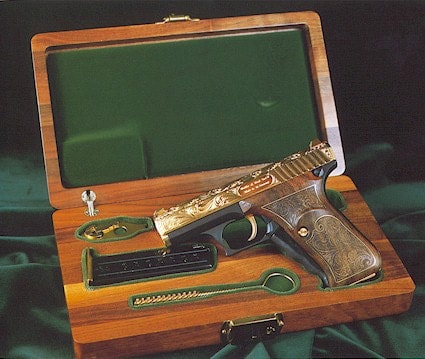 HKP7s were never produced in the US, but thousands were imported over a thirty-year period. Import marks on the right hand slide are a fast way to tell what era any P7s found in the US was made. Generally, the guns were imported, first through distributors in Virginia, then Trussville Alabama (by HKI) from 2004-2008, and finally through Columbus, GA. Of course, there are also PW Arms, Redmond (WA) and RTB Miami FL guns floating around as well.

In the end, the HK P7 pistol was extremely labor-intensive to make evidenced by the fact that HK walked away from the delayed blowback action all together and went with a more traditional Browning tilting locking mechanism on its later USP and P30 series guns.

However, these guns still do not match the svelte elegance of their one and only ‘squeeze-cocker’.