The Italian firm of Pietro Beretta has long been known in this country for their semi-auto pistols of all sizes. What you may not know is that they also marketed some of the most popular submachine guns of the past century—for which they are very well known outside the US.  One of these is the crowd-pleasing M12. 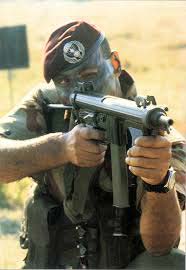 Italian military and police have used submachine guns since WWI.

Beretta was one of the first companies in the world to manufacture what are considered submachine guns today. In fact, their wood-stocked M1918 9mm was the first conventional subgun ever issued to troops in combat and it was during World War One! Their later M1938 was one of the better subguns of WWII and is still in somewhat limited service around the world. With a lineage like this, it was almost predetermined that in 1953, the company would invent a new pistol caliber select fire burp gun for the modern age—and that’s where the M12 came in.

With a design team led by Domenico Salza (the engineer who later modified the M1 Garand into the popular BM59 box magazine 7.62mm NATO battle rifle) work progressed throughout the 1950s.

Design of the M12 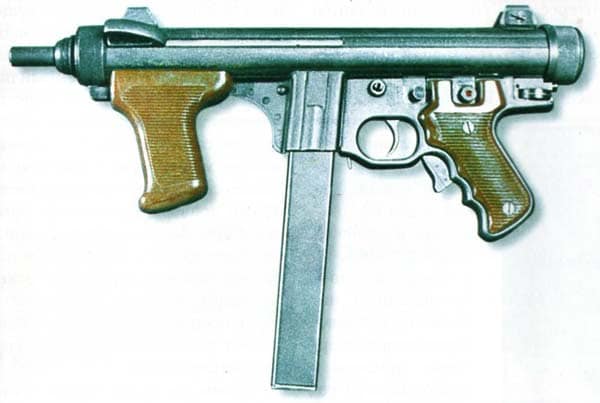 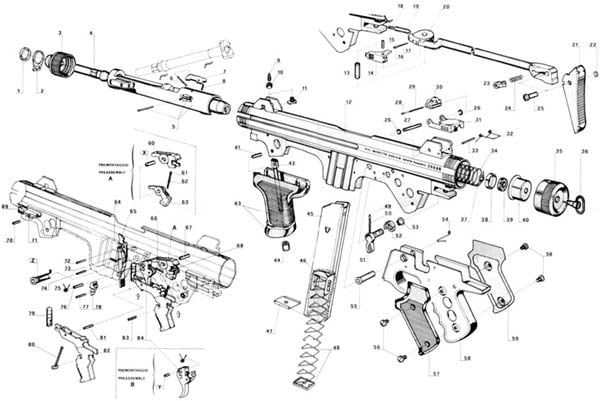 The M12 is an elegant but complex design, using more than 80 parts.

Leaving behind the heavy wooden stocks and milled receivers of their older burp gun designs, Salza utilized a simple receiver tube made of steel stamping and fitted to it a pair of pistol grips with plastic panels (the rear one with a trigger pack) and a magazine well. To keep it compact, a side-folding metal butt stock was fitted that could shrink the overall length of the weapon from 26 to 16.5-inches when needed.

The gun used a telescoping bolt, like the Czech Vz23 and Israeli Uzi that preceded it by a half decade. This type of bolt, a radical departure from the WWII era guns, allowed the action to be shortened by several inches as the bolt itself wrapped over and around the barrel. Most of the 7-pound unloaded weight of the gun was therefore distributed above the bore axis of its 7.9-inch barrel, which gave the M12 great pointability. 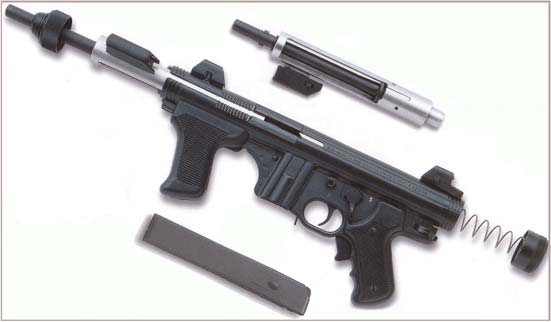 Blowback in operation, it had few moving parts to break or jam and its heavy telescoping open-bolt could fire at a nice and lazy 550-round per minute cyclic when on full auto. This is about the same rate of fire as the old school Tommy gun, which made it very controllable in short bursts. Since open-bolt designs are often prone to go off if dropped, the M12 was given a grip safety to make it ‘drop-safe’. Standard box magazines took the form of 20-rounders but 32 and 40 round models were made to keep the M12’s appetite sated for a few more seconds. The weapon was select fire so it could always be switched to single-shot mode if desired. Perfected by 1959, Beretta set out to sell their new age squirt gun.

Beretta suffered from competition from its old designs when trying to sell the M12. The Italian military liked the old school M1938 wooden stock Beretta subgun so much that they held on to it long past its prime, only buying the new M12 in small quantities. They did however garner some widespread adoption by the Carabinieri, the Italian military police force, who still keep the model in production with Beretta. 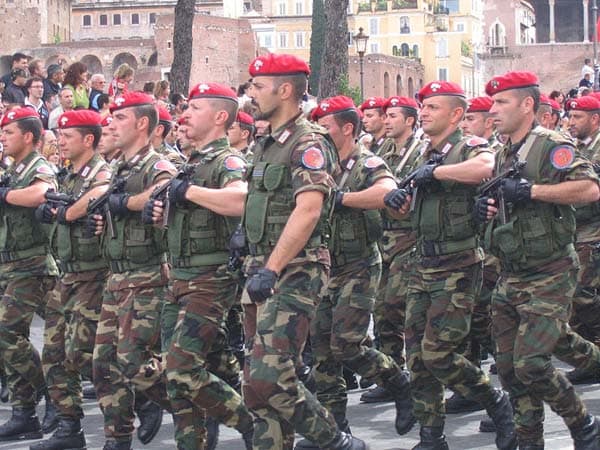 Carabinieri officers of the Squadrone Eliportato Carabinieri armed with M12s. 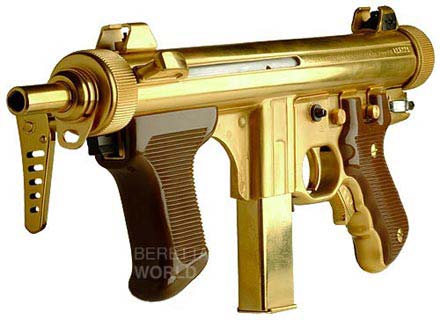 Overseas sales, however, was where the M12 hit its stride. Buyers across Latin America and the Middle East lined up to get their hands on the sleek new Italian subgun like pasty suburban kids buying iPhones. The gun became somewhat of a status symbol in oil-rich Arab countries and King Faisal of Saudi Arabia bought thousands for his military and police (as well as 25 gold-plated ones for his family and friends.)

The Israeli-made Uzi was not an option for these Islamic lands and HK just did not have much name recognition in the 1960s, which made the Beretta M12 worth its weight in…well you get it. 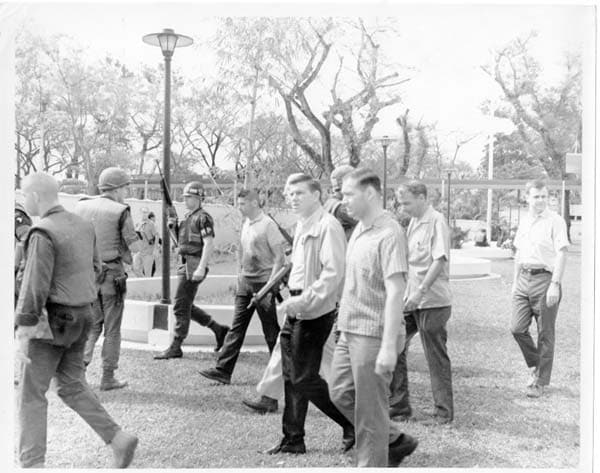 Several M12s (see center) were used in the defense of the US embassy in Saigon in 1968. 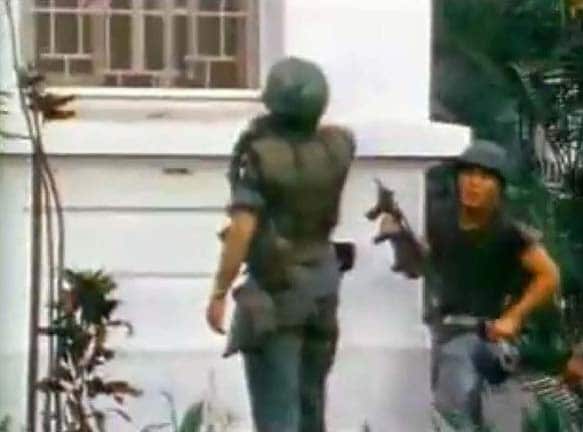 Indonesia and Brazil liked it so much they had Pindad and Taurus (as the M972) set up assembly lines to make licensed copies locally for their militaries to keep on tap.  The Shah in Iran bought thousands as did the King of Libya which later led to these NATO quality 9millys showing up all around the world in the hands of shifty terrorist types once those countries underwent regime changes. The Croatians made an unlicensed clone of the M12 (hey, things happen) called the Agram 2000 that they used during the Yugoslav wars of the 1990s. As such, its not uncommon for US troops operating around the world to have an M12 cross their paths and that’s nothing new— in 1968 US Marines used a few inherited Berettas to repulse Viet Cong sappers at the American embassy in Saigon. 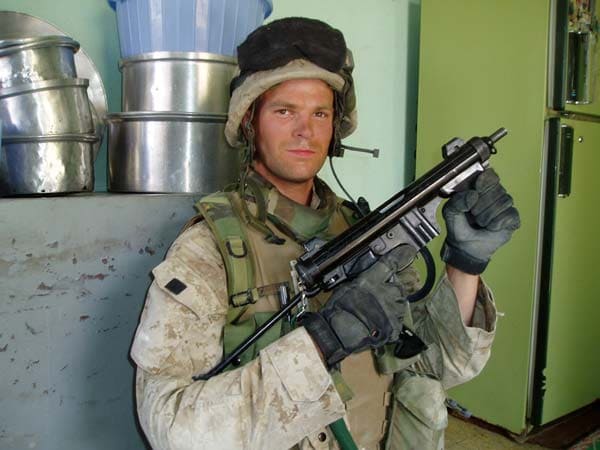 Relatively few 100% original Italian made Beretta M12s are floating around in the States and these rare gems are $20K+ Class III items. Many of these are former SWAT team guns and were imported when most new cars had 8-track players. A few Post-86 rewelds are out there made by SOTs as dealer samples but even these are in the 15K range. 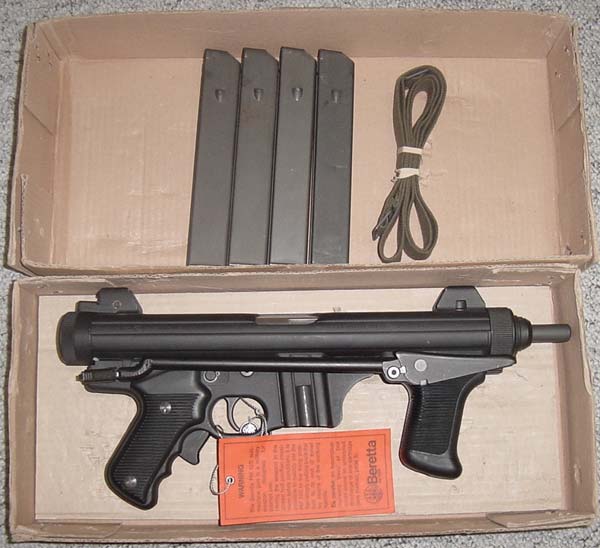 Beretta M12 that found it’s way onto the US market. 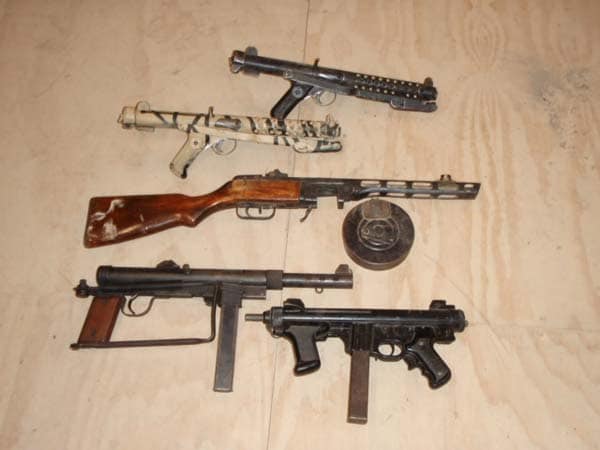 From the top down: Sterling submachine gun in black, Sterling subgun in tan, the PPSH-41, the Swedish K gun and finally the Beretta M12.

On the bright side, for most of the past decade torched parts kits were sold for $100 and a number of small shops sold 80% completed receivers on 4130 seamless DOM tubing for as little as $50. With the right cuts to the tube and a 16.25-inch barrel, this led to a lot of semi-auto closed-bolt M12 carbines on the cheap. With the right cuts and a little welding, this led to a lot of neat dummy guns suitable for wall hanging. With the wrong cuts and the original barrel, this also led to a few illegal non-NFA compliant sub gun builds.

Keeping the above in mind, make sure you have all your stamps in order before sinking a lot of money into a really good deal on a fast talking M12 homebuild. Or the next plate of spaghetti you eat could be in the Federal pen.