The Civil War's LeMat Revolver: ‘The Doctor’ is in (VIDEO) 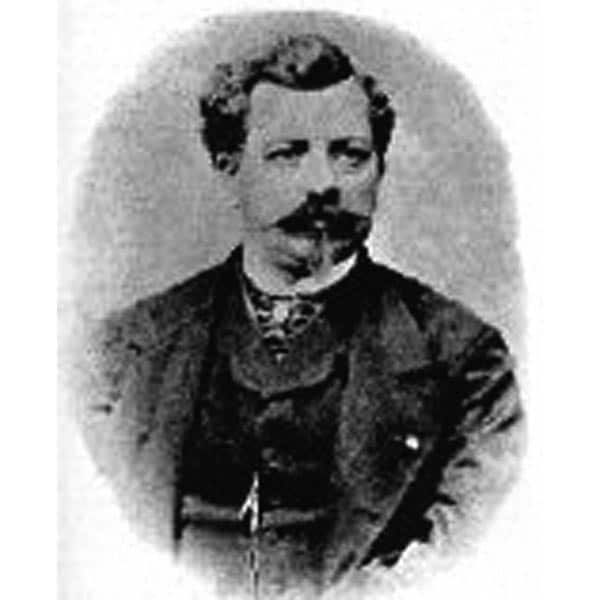 Back in 1850s New Orleans was still much more French than American. The city’s Creole heritage extended from the names of the streets, to the language spoken in its taverns, to the very essence of its inhabitants and one such case study to this phenomenon was a physician by the name of Dr. Jean Alexandre Francois LeMat. Born in Paris to an aristocratic family, he studied first for the priesthood before taking up medicine at a military hospital. A darling of local society, he was very well connected, in fact, his New Orleans creole wife was cousin to Major Pierre Gustave Toutant Beauregard of the US Army (more on this connection to follow).

In 1856 at 32-years of age, Dr. LeMat applied for and was granted a patent (US 15925) for a rather interesting and flamboyant revolver. 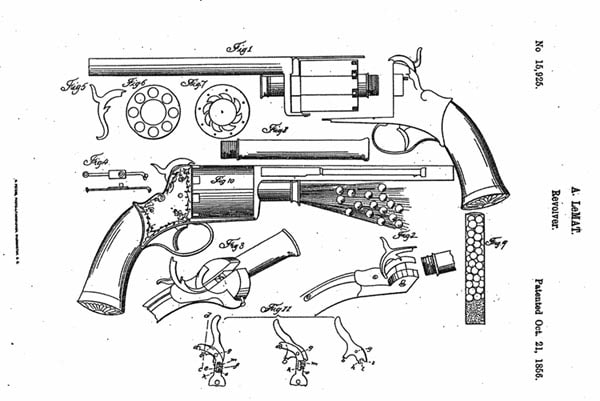 Design of the LeMat

The revolvers of the day, made by Colt and S&W, were very popular five and six shot weapons. LeMat envisioned a handgun with more firepower and produced a design that held ten shots. Of these ten shots, nine were for .42-caliber pistol balls in a rotating cylinder, while the tenth and final shot was in a separate barrel underneath the main one.  This held a 16-gauge shotgun load. 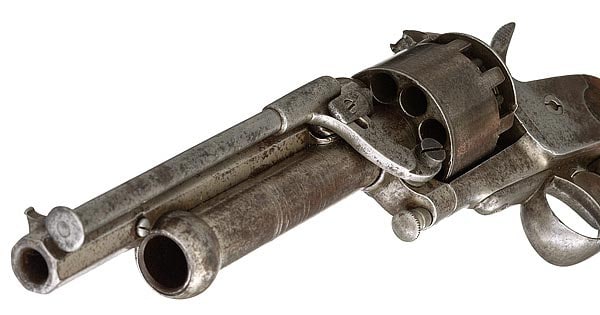 View of the LeMat’s double barrels. 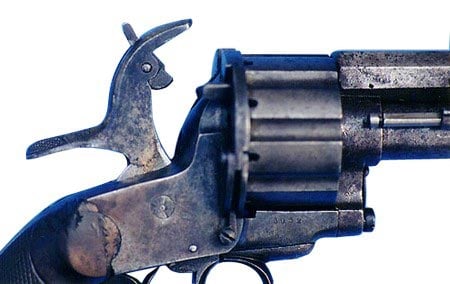 To fire the single-action only revolver one simple cocked the hammer and pulled the trigger. The same trigger could fire either the revolver barrel and cylinder or the shotgun barrel by flipping a firing pin for the desired chamber up or down on the end of the single hammer. It was a huge beast of a revolver, weighing in at over three pounds unloaded, a 6.75-inch main barrel, and an overall length of 13.25-inches. This ability to turn the revolver into a sawn-off 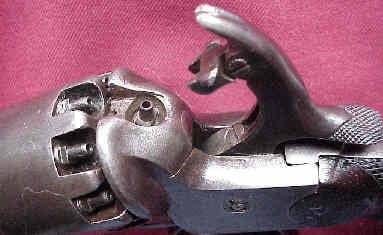 shotgun at a moment’s notice led the weapon to be called the “Grape Shot Revolver” by its inventor.

LeMat showed his design to his cousin by marriage, PGT Beauregard, who was a Major in the US Army Corps of Engineers, and involved in New Orleans politics. Beauregard soon became enamored with the concept and bankrolled not only the patent application, but also early production. 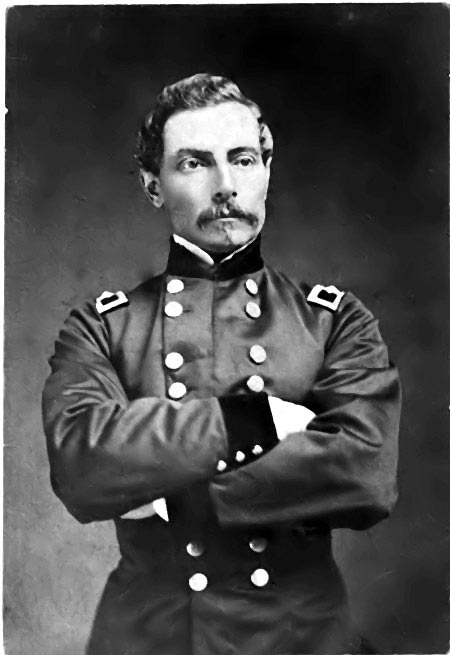 General P.G.T. Beauregard was a devotee and instrumental to the success of the LeMat revolver.

The first production was of less than 59 prototype revolvers (numbers vary widely and some scholars suggest as few as two of these were ever produced) were made by John Krider of Philadelphia, a well-known 19th century gunsmith in 1859. Beauregard recommended the pistol for submission to the military and placed one in the hands of Winfield Scott, the most senior General of the Army.  At the same time, he contacted several senators and other politicians known to him about the revolver. He then became a silent partner with the good doctor LeMat in the A. Le Mat & Co.” which was incorporated in New Orleans. The US Army was never to adopt the weapon however as the country was soon broken apart by war.

Beauregard resigned his commission, helped disarm the US Army forts in Louisiana, and famously cast his lot with the Confederacy. Beauregard commanded the Confederates at the bombardment of Fort Sumter in 1861, which started the war.

The 2nd (and much improved) model of the LeMat revolver. 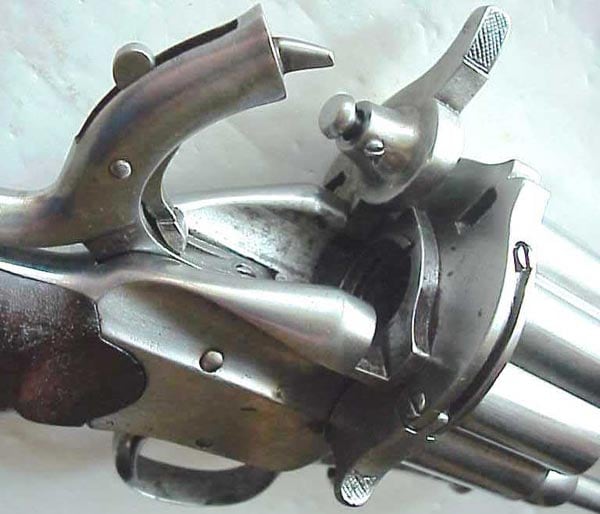 With the Civil War warming up, LeMat quickly captured a 5,000-unit contract for his revolver at $35 per weapon, more than twice the price of a Colt. LeMat, made a colonel in the Louisiana State Militia by the governor, had his gun rushed into production in France (and cutting Beauregard out of the deal).  In 1862, the First Model was put into production followed by a modified Second model design after many First Models displayed poor quality. These revolvers became a status symbol for dashing Confederate Army and Navy officers and were carried not only by Beauregard, but also by the swashbuckling cavalry general JEB Stuart and the dour General Braxton Bragg. 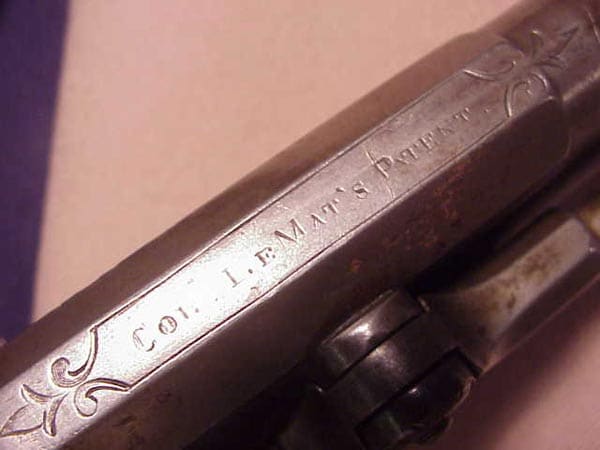 The holy grail of LeMat collecting is the original Philadelphia built and marked prototypes.  All of these that are known to exist are in museums though there may be some out in circulation. Beauregard’s own personal LeMat is in the Museum of the Confederacy. Then there are the First Model guns, identified by low serial numbers (under 500), and marked “Col LeMat’s Patent“.

First Model LeMats are very rare, as fewer than 450 were ever made and they often go for over $100,000 when they surface at auction. Second Model LeMats, marked “Syst Le Mat Bte s – g – d – g Paris” were made in France but often have British “N” proof marks as they were smuggled through the UK to the CSA. Some 2,500 of these were made and many lost in sunken Confederate blockade-runners, leaving remaining examples to fetch $10,000 quick for even ugly ducklings.

A hundred “Baby Lemat’s,” shortened snub-nosed revolvers in .36-caliber/18-gauge were made but these are even scarcer than the Krider guns. LeMat continued low production of various models of handguns after 1868 but they are outside the scope of this article. 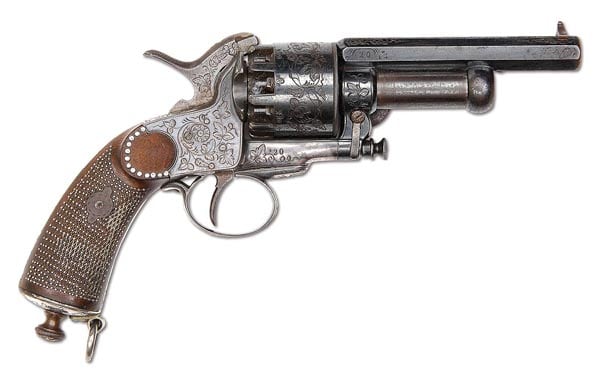 The well-known Italian replica firm of F.LLI Pietta has produced a modern reproduction of the LeMat since 1984 and has sold thousands of them to Cowboy Action shooters, Civil War re-enactors, and collectors. Their revolver, other than being chambered in .44 (.451″ ball) and 20-gauge respectively rather than the original calibers, is a rather faithful reproduction and tends to run about $800. It’s probable that there are many more of these in circulation than there ever were of the real thing.

LeMat himself dabbled in both ordnance and medicine the rest of his life. During the Civil War, he managed a munitions factory for the Confederacy right after he invented the tracheal speculum, a much-needed medical tool. His family’ fortunes waning after the War, he returned to France where he led a unit of American volunteers in the 1870 Franco-Prussian War and died peacefully in 1895 at age 74.

Today the legacy of the LeMat Grape Shot revolver can be seen very plainly in such modern designs as the Taurus Judge. In size, the current Judge is 7.5-inches long with a 3-inch barrel and weighs 29-ounces, overall very much smaller than its New Orleans born great uncle. However, instead of 9-shots of 42-caliber ball and a 16-gauge party favor, it is stoked five shots of .410.  Nonetheless, it is an interesting similarity.

Perhaps the Judge should have been called the Doctor.