If you drive a mini-sub to work, learned Russian as your first language and have a closet full of wetsuits, odds are you may have a working knowledge of the Avtomat Podvodnyj Spetsialnyj better known in the west as the APS. It’s the world’s only known underwater assault rifle and its James Bond-style interesting. 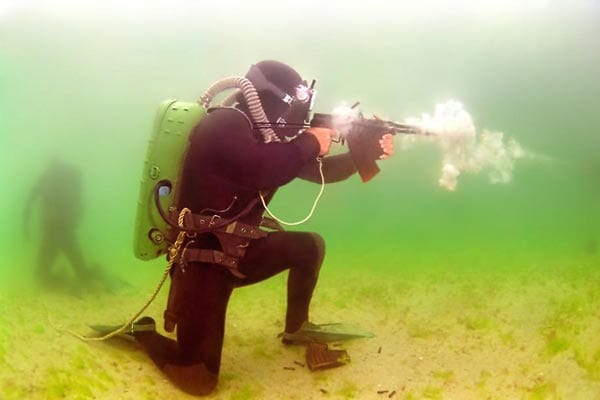 First off, it’s important to remember that this weapon wasn’t a prototype that looked revolutionary on paper only to never get used; it was designed in the 1970s, placed into production at the TsNIITochMash plant and issued for use to untold thousands of Russian military types. The Soviets in the 1970s were anxious to build the world’s largest navy and were running a very close second to the US fleet. With more than 300 submarines and up to 50 at sea at any time, the Soviet Red Banner Fleet, led by the iconic Admiral Sergey Gorshkov, felt the secret to a communist victory on the waves was in operating under them. 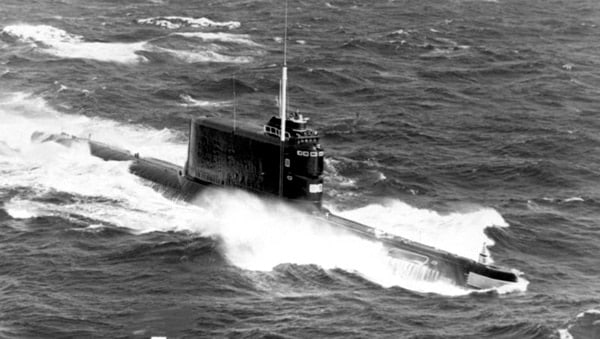 Of course, you couldn’t have the largest submarine fleet in the world without a huge legion of underwater commandos—who needed guns. 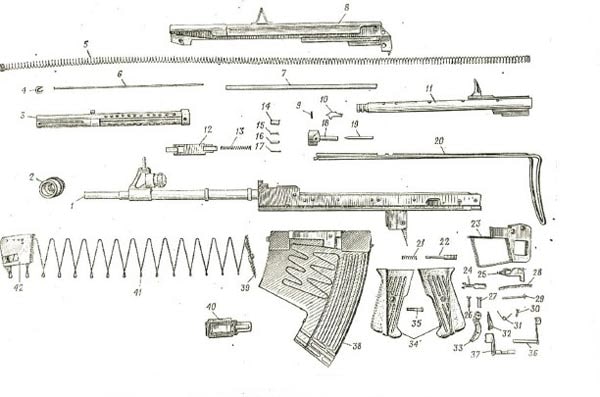 Vladimir Simonov, (no relation to Sergei Simonov, inventor of the SKS) a young firearms engineer who had previously invented the SPP-1 underwater pistol, tried his hand at a submersible assault rifle. This gun needed to be a few things: handy enough to be carried by commando-type troops who were already overloaded with gear, able to fire deadly rounds underwater at ranges out to 30-meters (100 feet, typically the near maximum visible range in seawater near the surface) and be select-fire.

The weapon Simonov came up with was simple, with only 42-named parts. Overall it greatly resembled both in lay out and action, the AK-47 series rifles, which was the standard assault rifle of the Soviet Army and Navy. With a skeletonized buttstock, it could compact down to just 24-inches long overall, perfect for storage in the gloveboxes of Soviet mini-subs.

Firing special 5.66x120mm steel darts from a 39mm long cartridge case at up to 600-rounds per minute, the action had to be stretched and redesigned to handle such an oddball outsized 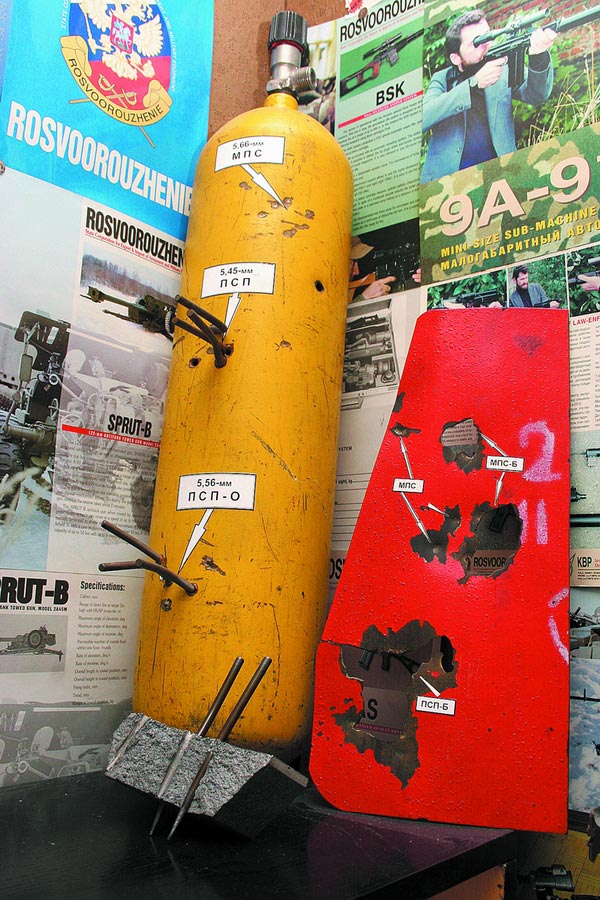 round. The barrel, not needed to stabilize the spin of the darts underwater due to the dart’s flat pointed hydrodynamic cavity, is smoothbore like that of a shotgun. This gives the weapon lousy range and accuracy above water but under the waves, it’s a killer.

Fully loaded with its oddly shaped magazine crammed full of 26 steel darts, the gun tips the scales at 7.5-pounds. As water displacement of an object submerged is roughly only 2/3rd its weight in air, the APS weighs less than 5-pounds when underwater. Speaking of shooting underwater, the gas-operated assault rifle acts differently the deeper submerged it is, due to the density and pressure of the water it fires through. In waters up to 16-feet deep, its range is up to 100-feet away with its darts still capable of piercing a dive tank or neoprene suit. However, this changes rapidly with depth and by the time the frogman gets to 130-feet deep, the APS is useless for anything over 30-feet away.

By 1975, the APS rifle was adopted, being produced by both TsNIITochMash, and the famous Tula arms factories for the Soviet and other Warsaw Pact navies. In the Soviet navy, the APS went to arm both Spetsnaz commandoes and underwater warfare units protecting naval bases from underwater attack. 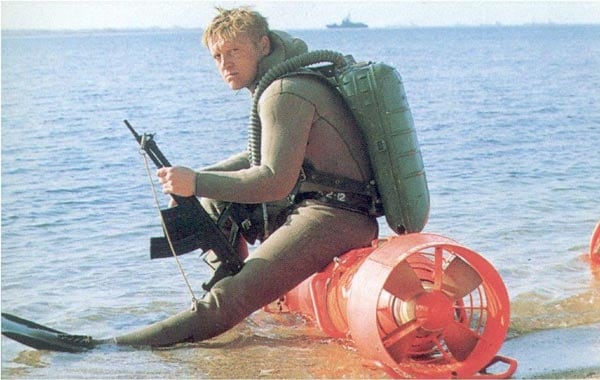 Soviet Navy Spetnaz with APS rifle and something on his mind. 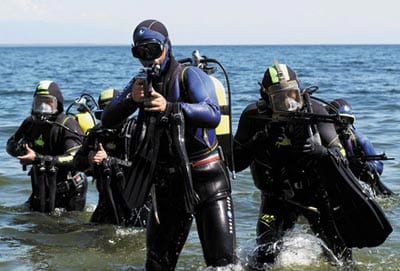 The gun was a one-of-a-kind weapon with no true competitor throughout the 1970s-1990s. Its very existence was unknown in the West until the 1980s. Simonov received the State Prize of the USSR in 1982 for his work on the project. It’s thought that since then the rifle has been sold abroad to almost any country who wanted a few and with enough hard foreign currency to buy them.

Still, the APS is limited in its effectiveness and in 2000 it was replaced in Spetsnaz use by the ASM-DT rifle, a 5.45x39mm hybrid rifle that could fire either special underwater rounds while submerged or standard AK-74 rounds when on the surface. Even this new gun is thought to soon be replaced by the ADS, which would be Russia’s third generation of underwater assault rifle.

However, it is still believed that the good old disco-era APS is used by frogmen standing underwater posts in strategic Russian harbors—the Russkis never throw anything away.

What do the SEALS use? 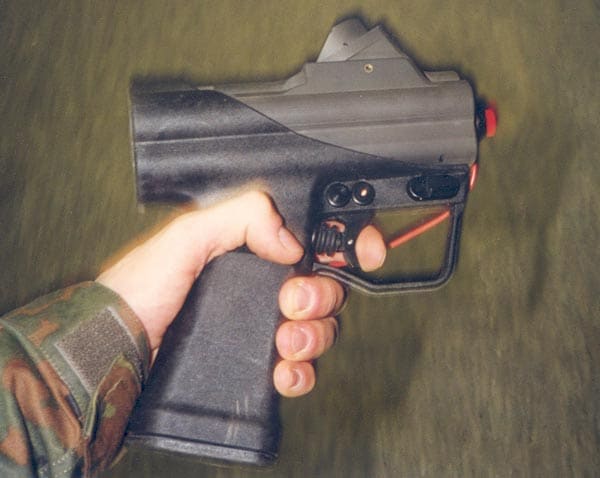 With those sneaky Soviets coming up with such an unparalleled weapon for their frogmen to use, you may be quick to ask, “what about us?” Well, the US military and her allies (officially) don’t have any (unclassified) underwater assault rifles.  This doesn’t mean though that the SEALS, SBS, German Kampfschwimmer, etc., show up to “pool parties” unarmed. The small handheld HKP11 device, a four-shot dart gun that fires out to 15-meters underwater has been widely used by western military divers. 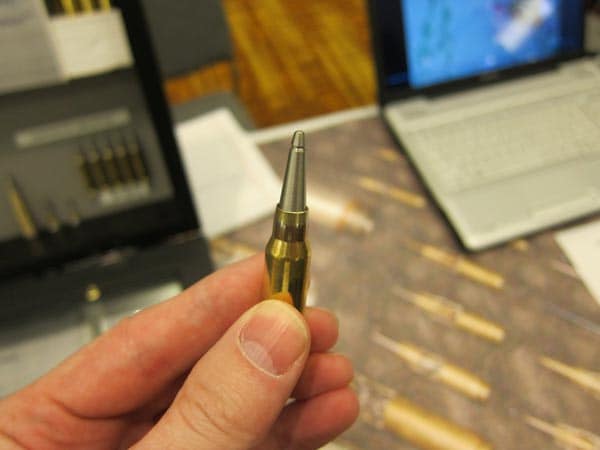 Moving out of the realm of darts, special 5.56mm ammunition  has been developed and distributed in recent years that enable a M16/M4/HK416, etc. style weapon to fire underwater. This ammunition has a supercavitating tip that is effective out to 50-feet underwater, and is capable of making shots both into and out from the water. Larger calibers, such as 7.62 and .50-caliber BMG are being evaluated for possible use in shooting torpedoes underwater before they could strike a ship among other ideas.

Besides, since the original UDT teams of World War II, all western combat swimmers have a trusty dive/fighting knife for close in work. Which is all a real frogman ever really needs, right?