Here at Guns.com we are well aware of thousands of different types of ‘boomsticks’, but we aren’t talking about those right now. No the ones on the table today are sticks that go bang. Read on and get in touch with that most peculiar and perhaps specialized of firearms: the bangstick.

What is a bangstick anyway? 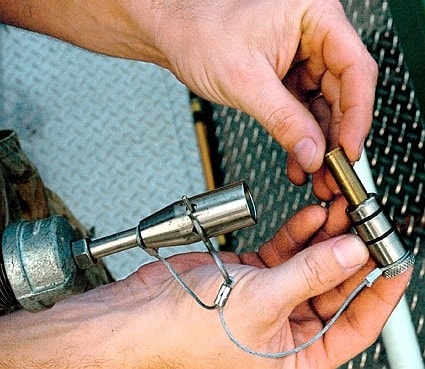 A bangstick is a simple tool for a not so simple task: the elimination of a dangerous predator in the water on contact. To sketch out the broad strokes, it’s a pole, with a stainless steel chamber attached to it that holds a live round of ammunition over a fixed firing pin. When you hit the dangerous end of this chamber with a good amount of oomph onto a target, it forces the round back onto the pin and out fires a projectile. Most manufacturers use a simple cotter pin, hairpin, or braided wire thread as a physical safety so that the bangstick doesn’t go off until you really want it to. There is no trigger. 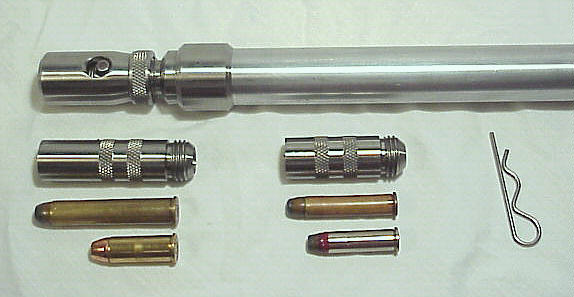 There are no sights. There is no magazine or action, as we know it on other firearms. In fact, even though these devices fire modern rimfire and centerfire rounds, the ATF does not consider them to be regulated firearms…but more on that later.

What do you do with it?

These bangsticks are split into roughly two schools of development (who knew this would be so complicated?). One being for use on land against reptiles typically still in the water, and the other underwater against sharks and pelagic fish. 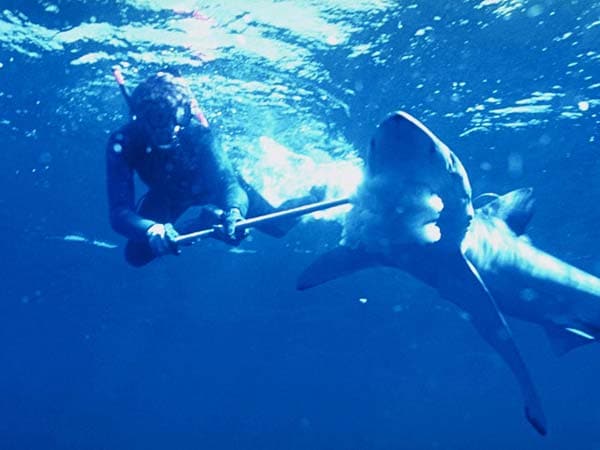 Diver using a bangstick on a 12-foot blue shark that was getting too touchy-feely. 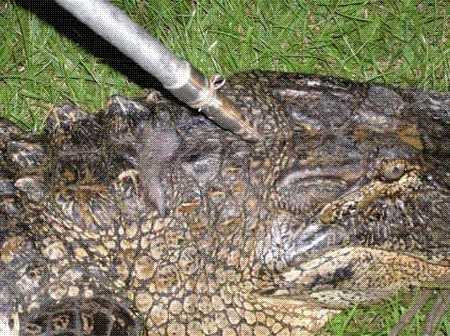 Bangstick resting on the sweet spot.

Gator sticks typically are mounted on long poles (think 5+ feet) so that the user can stand in a boat and slip it down into the swamp to dispatch an already caught wacky gator in the wild. Once endangered, many states including Alabama, Mississippi, Texas, and South Carolina now have so many of these prehistoric beasts that their numbers have to be controlled by hunting. That’s where the bangstick comes in. Typical calibers against gators are .22LR/WMR, and .38.

Moving from brown water into blue, the other realm of the bangstick is in shark busting. Divers in international and US federal waters can use bangsticks to defend themselves against pesky and potentially man-eating sharks poking around their dive site. 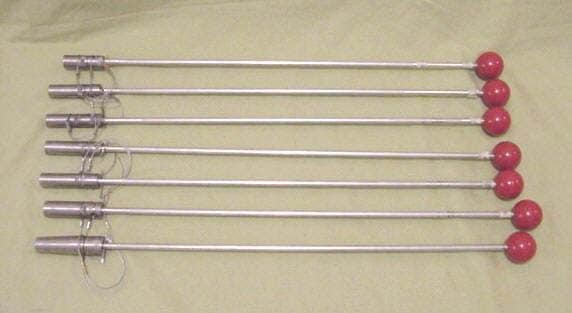 These Steve Zissou style gatts are usually attached to spears for taking fish at distance or to short (26-inch) ball and rod assemblies for close-in defense. Since the users of these devices may be facing ‘Jaws’ right in the snout, these often come in more hellacious calibers than their gatorstick cousins such as .44 Magnum, 12-gauge, and even rifle rounds up to .50 BMG. With this being said, there is a subset of spear fishermen who take game fish like tuna, stripers, and halibut with smaller caliber bangsticks, aiming for precision shots to the head to preserve the meat.

Incidentally, sometimes these devices are incorrectly called powerheads. I say incorrectly because the powerhead was a completely different concept that was a point-impact spear point, powered by a blank cartridge, and fired a cable and float through a fish. Bangsticks shoot fish and gators. Powerheads poke a spear through a fish. Clear as mud? 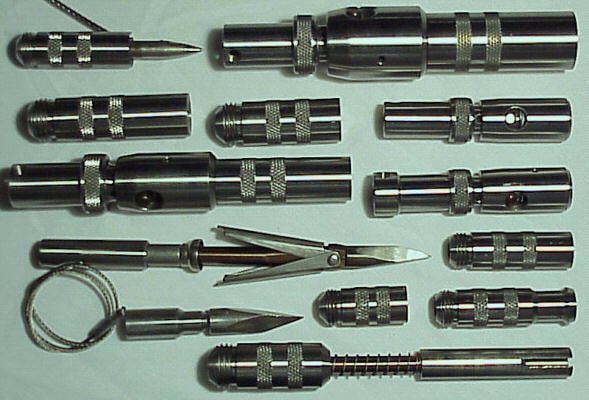 The Navy Weighs In

Back in the 1960s when the US Navy was doing lots of experimentation with underwater living (just Google Sealab); they had the SeaWay Bangstick developed. This ‘shark splitter’ used a special blank .30-30 cartridge with no bullet rather than a live round to instantly explode targets with a tremendous amount of focused gas pressure. 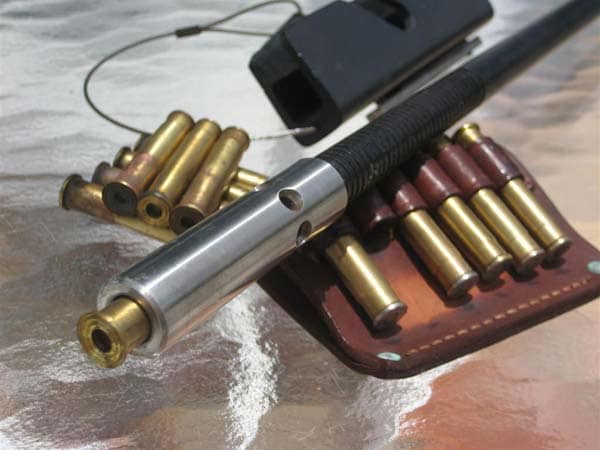 Seaway bangstick and its special rounds. Note that the blank fires through what used to be the primer hole in the base.

The round was loaded ‘backwards’ with the former bottom of the rimmed cartridge case sticking out. When triggered, the gases would escape from the former primer hole into the target. These Jaws manglers are the ultimate in bangstick collectables. A similar device, the Farallon Shark Dart, used CO2 balloons injected through a hypodermic style knife blade to cause the same effect. Nasty stuff.

How to get your own 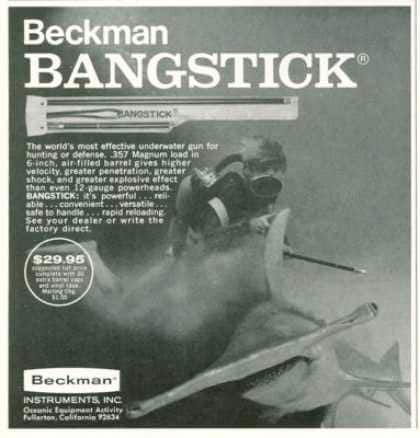 While you don’t stumble across these specialized waterborne guns in your local big box sporting goods chain, there is no shortage of makers out there. Custom Bang Sticks, Bud’s Bangsticks (formerly A&S), Beco Inner Space, and Bills Bangsticks all make them in a huge variety of sizes, styles, and calibers. These run anywhere from $75-$200, which is sweet for such peculiar firepower.

Ray Odor in Tampa Bay Florida makes a related item. These series of so-called PPDs (Personal Protective Devices) come in an amazing range of calibers that include .223 and .30-06. These $35 cigar sized devices can fit in your buoyancy compensator pocket until needed, and then the 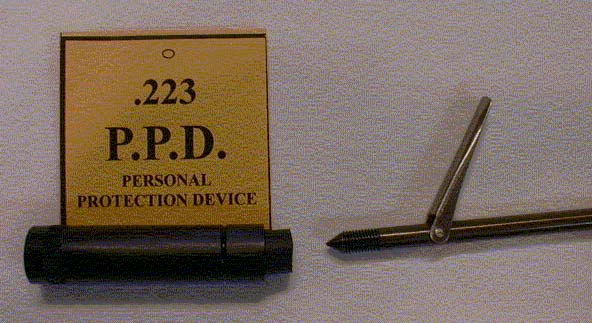 The PPD with a spear shaft. 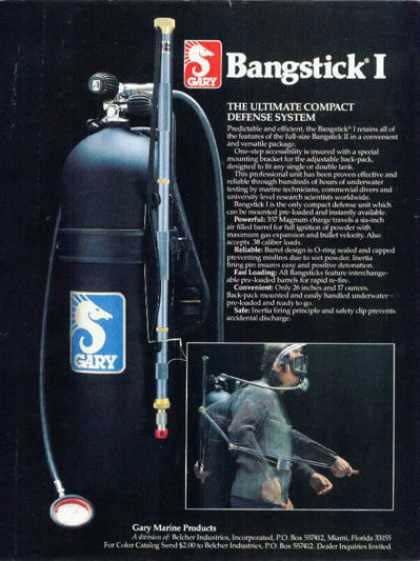 loaded PPD can be slipped onto a spear gun shaft when the grey suits get too close. These are totally safe until married up to a spear, as they have no on-board firing pin. The spear point does the work.

These devices have been around since the 1950s, when SCUBA diving really started taking off and some vintage bangsticks, made by dive equipment companies such as Dacor, Healthways, and others are have some minor collectability with those who love old dive helmets, spear guns, and the like. In short, guys who watched too much Jonny Quest as a kid (of which I am one).

Long story short, you can own, buy, and ship these things through the mail without an FFL, NICS check, yellow form, 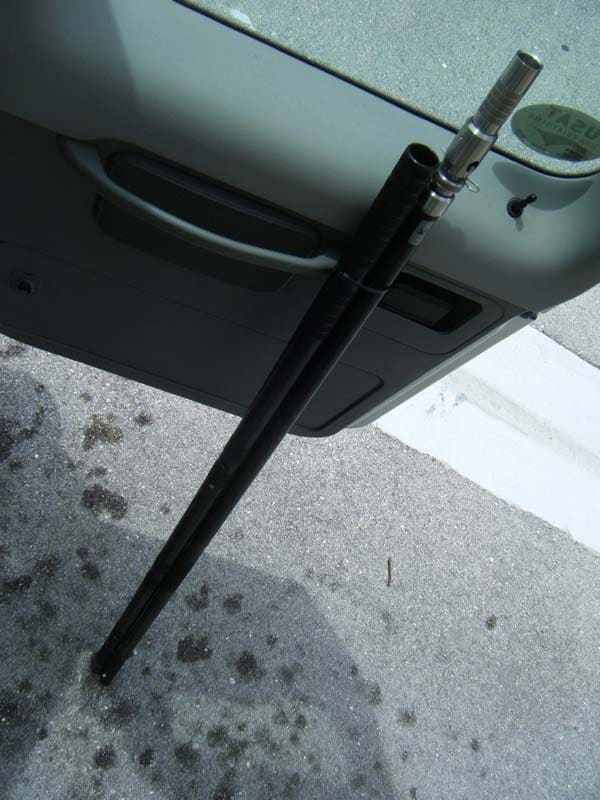 so on and so forth. Long story long: In 1958, the government poked their nose into the powerhead and bangstick arena and said that if it had an on-board firing pin, no effective barrel, and was permanently attached to a rod that gave it an overall length of at least 26-inches, it’s legal and it’s not a gun. If it doesn’t have a firing pin (like the PPD), then length is not an issue until it does. The thing is, if have one that is shorter than 26-inches, and it can fire, then now you have an unregistered NFA firearm, which can get you some time in the slammer. So be super aware. Most of the dealers who sell bangsticks will have copies of ATF letters vouching for the legality of the product, and it’s always a good idea to print/save a copy of the letter for yourself if the company ever goes away.

Every few years law enforcement takes one of these off a criminal who is using it as a concealable zip gun, which brings undue scrutiny on the devices. With that being said, be careful how you travel with these non-guns due to the very fine line they hold with the ATF and various state regs. Recently a traveler attempting to board a plane at Honolulu International, a state with a large population of shark sticks in use, had a .44 Magnum bangstick sans pole in their carry-on luggage, which did not go over real well with TSA.

Common sense safety stuff for these gatorbusters and shark snipers is to always keep them unloaded when not in use, pointed in a safe direction, be sure of your target—you know, all of the classic firearms rules.

It’s generally a bad idea to fire these out of water, as bad things can happen including rocks and bone shards flying around like shrapnel. Oh yeah, and be sure to waterproof your ammo so that it will actually go bang. Most users do this with a little fingernail polish across the base of the primer. For shotgun shells, coat the primer with a dab of polish and hit the crimp point of the hull with some candle wax to get a good seal.

The last thing you want is to bring wet ammo to a shark fight.