Floating around the surplus firearms market is a gun that is often derided as an ‘unlicensed Colt 1911 copy’. Well the truth is, this gun, the Ballester Molina, was designed from the ground up as an homage to John Browning’s .45ACP classic, and they have a growing legion of collectors.

Why did this happen? 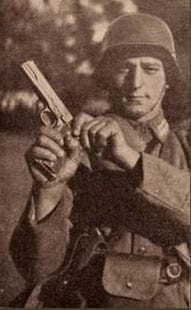 In 1916, Argentina ordered 10,000 Colt 1911s from the US for their military. Unsurprisingly, they liked those so much that they asked for 10 times as many of a slightly modified version from Colt.  These are known today as the Colt Systema Modello 1927.

By the 1930s, as the US Great Depression turned global, the Argentine government was looking for more of the same gun, only cheaper.  And that’s when a local carmaker named HAFDASA seized the moment.

In the early 1920s, the Hispano-Suiza name was internationally known as a maker of some of the best automobile and airplane engines on any continent. The European company’s Argentine partnership, Hispano-Argentina Fábrica de Automóviles S.A. (HAFDASA), made many of the bestselling trucks and cars on the streets of Buenos Aires. The two heads of the company were Arturo Ballester and Eugenio Molina, and in 1937, they took their manufacturing skills and turned them to the task of making a cheaper Argentine-built 1911.

With their chief engineer, Rorice Rigaud, Ballester, and Molina started with an old imported Model 1916 Colt and reverse engineered it. Each individual part was looked at, simplified for ease of production, and set to the side. The result was a gun that looked like a 1911, felt like a 1911, fieldstripped and shot like a 1911, but in the end wasn’t. 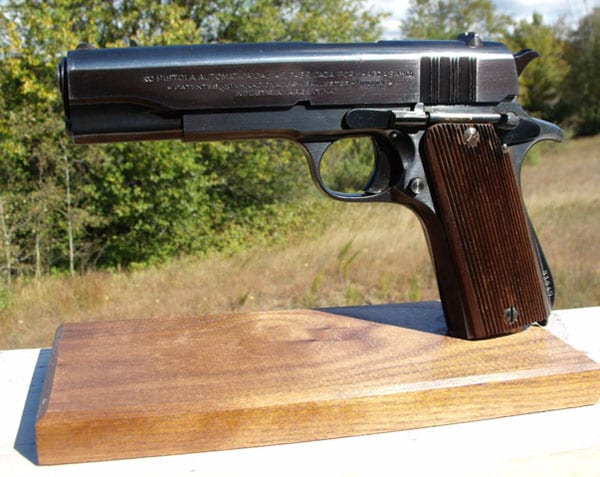 Ballester-Molina 1911 pistol, which Colt licensed and reverse engineered from their 1916 model. (Photo: hafdasa.com) 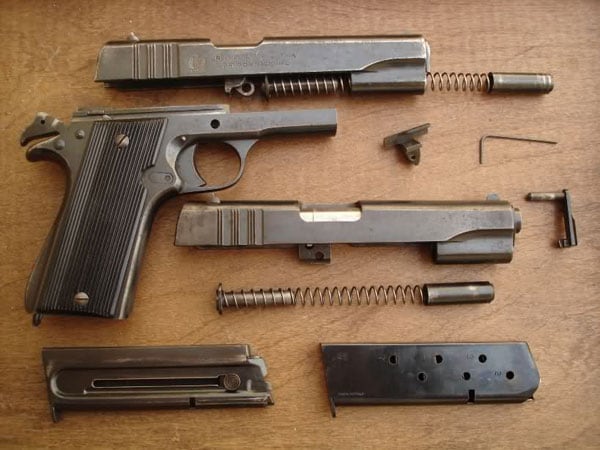 There was only a very slight difference in dimensions; the Ballester being just a hair longer overall and weighing in at about 40-ounces unloaded while the Colt made inspiration came in at 38-ounces. The trigger pivots on a roll pin, rather than slides which is different from the 1911 and was borrowed from the Spanish-made Star Model B 9mm.  Also, since the Ballester was based in large part on the Model 1916 Colt, which was based on the original Colt 1911, which did not have a beavertail grip safety (which was added in the 1911A1 model), the Ballester does not have one either. Both the Ballester and the 1911 do have the same 5-inch barrel, same short-recoil operation, and same single action operation. With the redesign, mixing, and evaluation of each of its components, the Ballester-Molina pistol (poor old Rigaud was left out in the end) was a handgun that Colt couldn’t say it was an unlicensed copy. 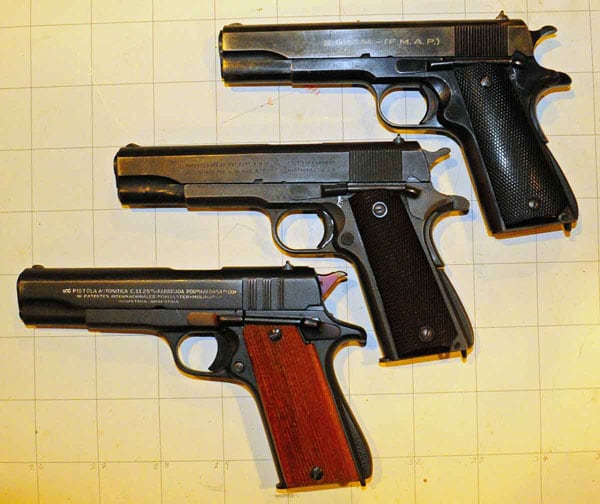 The gun was instantly attractive to the Argentine military as the ammunition, 7-shot magazines, and holsters from their existing supplies of Colts were interchangeable. Troops trained on the older guns could figure out the new models without any assistance. Best of all, it was significantly cheaper to build these guns locally than buying Colts from the US. This came in handy in 1938, as Argentina was politically closer to Germany than some American politicians liked, and a as a World War loomed on the horizon the country would be pressured to pick sides. 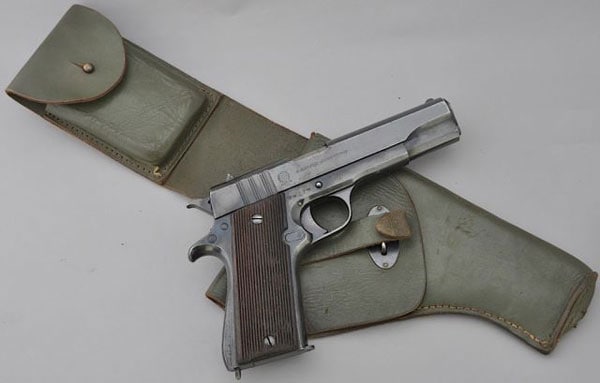 The Ballester was an immediate success and was soon adopted by not only the Army, but the Navy, police forces, and coast guard. They were also exported to Latin American countries without their own arms making plants, such as Bolivia, Ecuador, Colombia, and Peru. 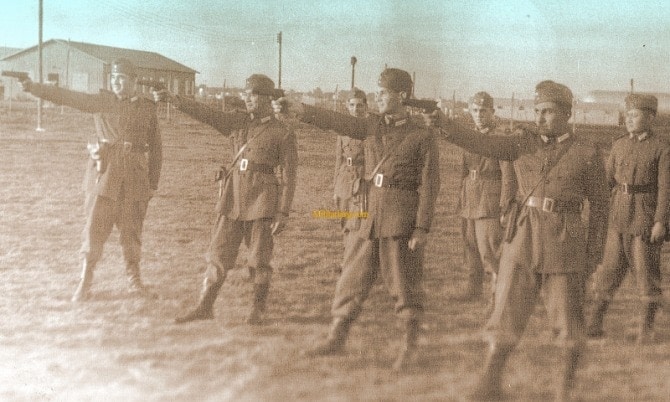 Argentine forces practicing with Ballester-Molina .45 caliber pistols. These cheap, regionally made weapons were a hit in South America and as exports to Europe. (Militariag.com) 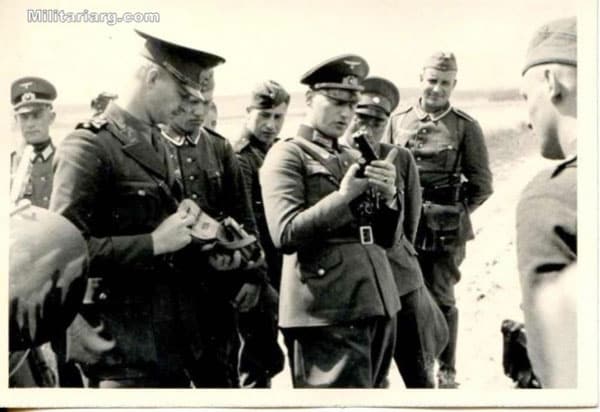 Rare photo from pre-WWII Germany. An Argentine soldier seemingly demonstrates a Ballester-Molina 1911 pistol to German military officers. The Argentine is the one putting in the magazine. (Militariag.com)

When World War II broke out in 1939, Argentina played it neutral for most of it, only declaring war on Germany five weeks before the end of the war in Europe. As such, she was a hotbed for Nazi spies of the Bolivar spy ring, run by Captain Dietrich Niebuhr (Codename Diego), while simultaneously selling Great Britain beef and guns to fight the Nazis.

Speaking of guns, these were Ballesters. It seems that at least 8,000 and possibly as many as 15,000 Argentine made .45s were sold to the British government for use by commando units hungry for mean looking and reliable hardware to fight the Germans in occupied Europe. These guns were meant for the Special Operations Executive (SOE), known as Churchill’s Secret Army. 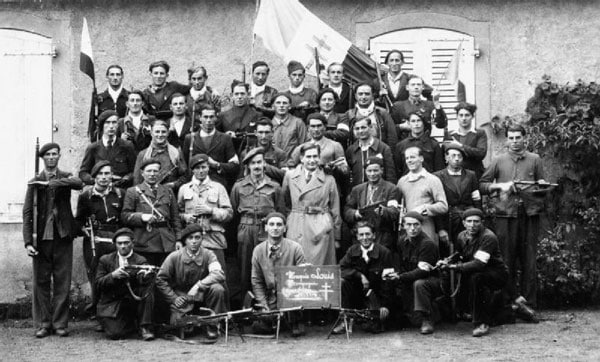 The Ballester-Molina made new friends during and post-WW2 like this mustached SOE operative seen in the center of this group of French Resistance fighters.

These guns were well made, hard-hitting, and above all-deniable as being attributed to England if found. As such, they typically were given no British markings.

Rumors abound on the internet that the steel HAFDASA used during WWII to make their guns came from repurposed armor of the Nazi pocket battleship Admiral Graf Spee, scuttled in nearby Montevideo. If true, the irony of an Argentine-made gun, designed by a Frenchman, based on a US design, built from German steel, being used by British commandos in occupied France against German troops is sweet.

Even withstanding the guns exported, the Argentines kept the Ballester around for decades after HAFDASA went belly-up in 1953. They were only replaced in the 1970s by the (John Browning designed) FN Hi-Power. 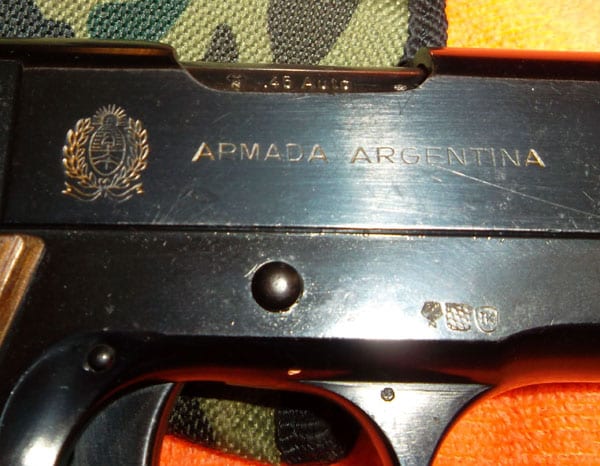 Some 113,000ish Ballester-Molinas were made 1938-53. These guns have been steadily crashing on our shores since about 1946 in one wave after another. They are very distinctive, with the entire left hand slide being extensively roll marked. Besides the company banners and names, there will usually be various military or national crests and branch stamps. By branch stamps, we mean which branch of the Argentine armed services used it. These include Ejercito (Army), Policia Maritima (Coast Guard), Armada (Navy), Aeronautica (Air Force), Aduanera (Customs) or Policia (Police). British contract guns are the holy grail of Ballester collectors and will fall into the serial number range of under 21,000 with a ‘B‘ prefix. 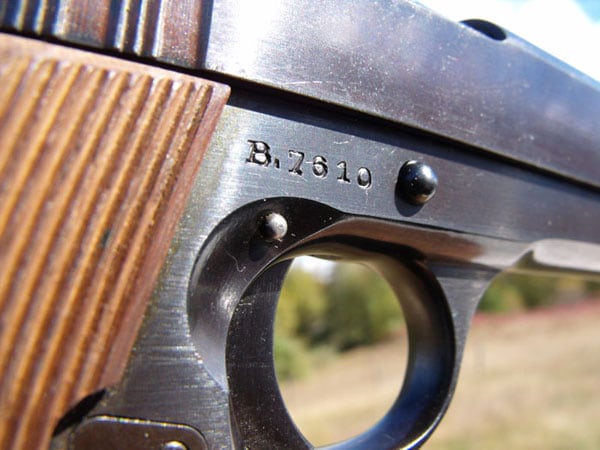 Be on the lookout for British contract guns, easily identified by their “B” prefixes on serial numbers. (Photo: hafdasa.com)

Genuine Ballester-made mags will even look funny, with a ‘HA‘ inside of a diamond stamped on them. The grips of these guns have distinctive hardwood stocks, with 19 vertical lines and a different screw hole pattern than any other 1911 style pistol. Nobody likes a different screw hole! Anyway, any number of custom grip makers who seem to live to make exotic panels for these Latin .45s has overcome this. 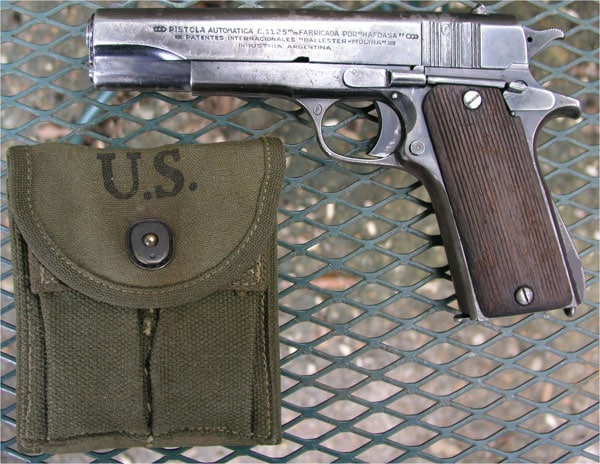 Some Ballesters’ will have 11.25mm rollmarks. These were often guns made for commercial sale and export but rest assured they are still 45s. 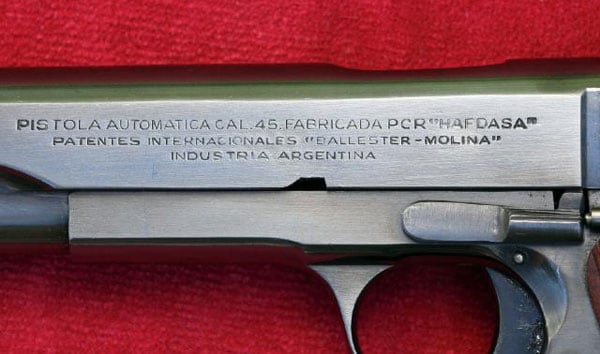 They are good shooters and have a reputation for being able to gobble just about any .45 ACP you stoke it with. The problem with keeping these guns running is spare parts. The only modern 1911 parts that readily interchange is the barrel, magazine, bushing, spring and guide rod. Some of the other minor pieces can be modified to work if you know what you are doing and are patient. While there are some original parts out there now from stripped guns, the pool gets smaller everyday, so stocking up on a beater ‘spares gun’ is a good idea if you collect and shoot your Ballester. If not, your Argie .45 may be so much steel paperweight in the future.

It used to be that these guns ran about $300ish just a few years ago, now we are increasingly seeing them for nearly twice as much. We guess people understand HAFDASA to mean: collectable.