The TEC-9: An immigrant's tale (VIDEO)

As anyone who was around in the 1980s will tell you, all the coolest guns were plastic (we mean polymer) 9mms. Some, like the Glock 17, were cooler than others. Still, if looks could kill and looks were your thing, in the 80s you turned to Miami, Florida and found the good old TEC9.

The thing was, you really did have to depend on its looks because the gun itself often left you hanging. 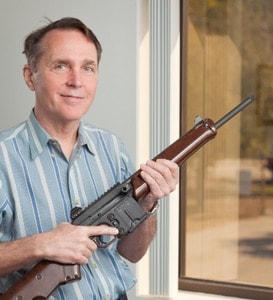 In invasion-conscious 1970s Sweden, the military was looking around for replacements for its vaunted Carl Gustav M/45, better known as K-gun. The Swedish K was a weapon for issue to commando types as well as truck drivers, vehicle crews and the like. It was a 7.7-pound (unloaded) 22-inch long 9mm burp gun that could chew out 600 rounds per minute. The local firm of Interdynamic AB of Stockholm put one of their designers on the task, a young man named George Kellgren.

Kellgren produced a very efficient little machine pistol designated the MP-9 that operated entirely by elementary blowback. Revolutionary for guns designed in the 1970s, the MP-9 had a polymer frame with steel inserts to cut down weight. Chunky for a pistol at 67-ounces (over four pounds) with a loaded 32-round magazine, it was still lighter than the K-gun it intended to replace by half. 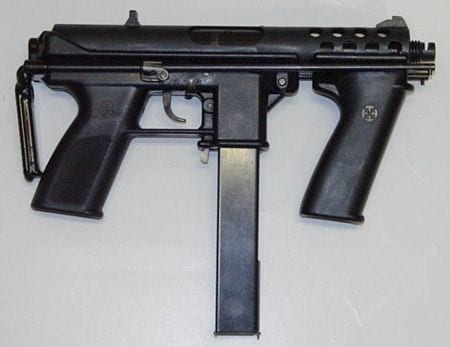 Interdynamic MP-9 Prototype machine pistol. The ‘X’ mark on the magazine well is the company logo.

The magazine loaded forward of the grip like the WWII M3 Grease Gun, which it rather resembled. It was just 12.5-inches overall with a 5-inch shrouded barrel and a 10-inch sight radius over fixed sights designed to zero with 124-grain FMJ standard military loads of 9x19mm Luger at 100-meters. To keep accidental shootings down since it fired from an open-bolt, it used Schmeisser style safety to lock the bolt and a second catch that was integrated into the left-handed cocking handle. The bolt has a fixed firing pin and was the only moving part of the gun. This select fire little gun could let it rip at 1000-rounds per minute. To keep it under control it had a foregrip and a collapsible wire buttstock. 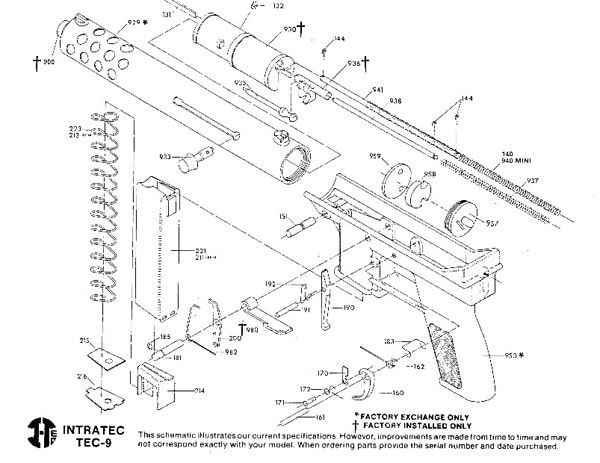 The gun was neat but it didn’t strike a chord with military buyers and it never went into production. It’s thought that just 50 or so test prototypes came off the line. While the MP-9 didn’t win any contracts with the Swedish military or any other force, the company saw the potential of the design for commercial sales in that great firearms candy store: the US. 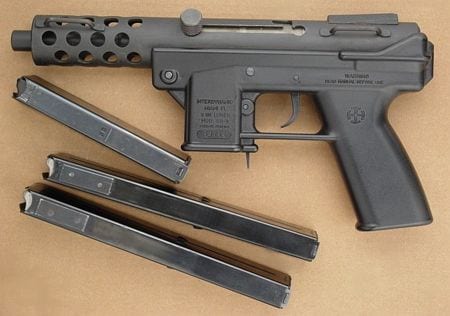 Kellgren took his show on the road and left for the US. With the backing of Interdynamic, he ran the company’s new US operation out of Miami from 1981-84, making a semi-auto version of the MP-9 called the KG-9. To comply with US NFA regs about short-barreled rifles, the KG-9 did not have the collapsible stock or the dedicated foregrip of the original. This gun, with its 3-inch barrel and paramilitary styling, was also marketed around as a select fire variant (this was before the Hughes Amendment cut out new machine guns for civilian purchasers in 1986). 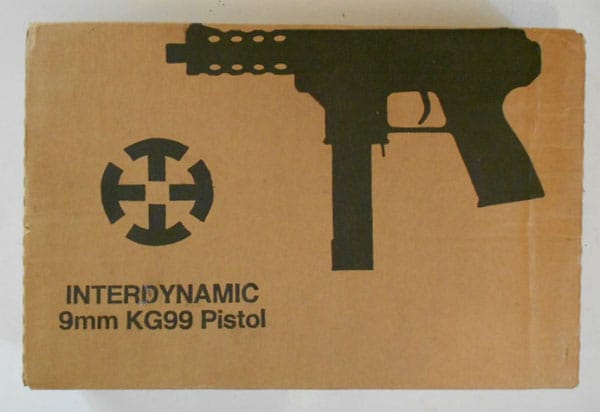 The ATF didn’t like the fact that the semi-auto version of the KG-9 still fired from a closed bolt and by 1983, the gun had been redesigned as a closed-bolt named the KG-99. Then there was some sort of fallout, after which Interdynamic America folded, and an employee there, Carlos Garcia, started the new Intratec company from the ashes. This led to the TEC-9. 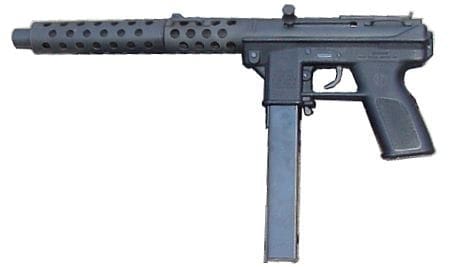 The TEC-9 debuted on the scene in 1985. Since the Swedish idea man had left the company to go start Grendel and then later Kel-Tec, Garcia dropped the ‘K’ like a bad habit from the gun’s designation.  Essentially, what American shooters got was a cheaper to make, poorer quality clone of Kellgren’s KG-99.

After a couple of lawsuits in which Intratec seemed to get on the bad end of the court’s good side, the TEC-9 disappeared and the DC-9 took its place. The DC is often said to be for “Designed for California” or “District of Columbia,” but Garcia himself stated it stands for “Defensive Carry”. Individual offerings often subtracted the threads on the barrel and picked up a different set of sling attachment points. By 1994, this model was extinct. 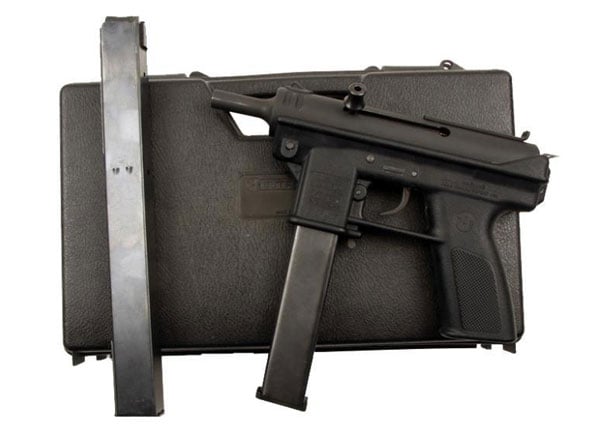 The AB-10 was the final incarnation of what is referred to today as the TEC-9. 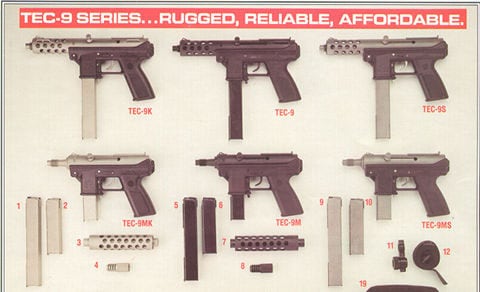 A replacement dubbed the AB-10, popped up in 1997. Sold with a 10-round magazine and a 2.75-inch non-threaded, non-shrouded barrel, it complied with the AWB and remained in production until 2000 when Intratec closed its doors. Sometime after the AB-10, the Kimmel AP-9, and the AA Arms AP9, both of which were clones of the original ‘evil’ TEC-9, shot through the sky like a comet and then disappeared. Thus ended the family tree. As far as we can tell, there hasn’t been a new TEC9 made for sale in a decade. 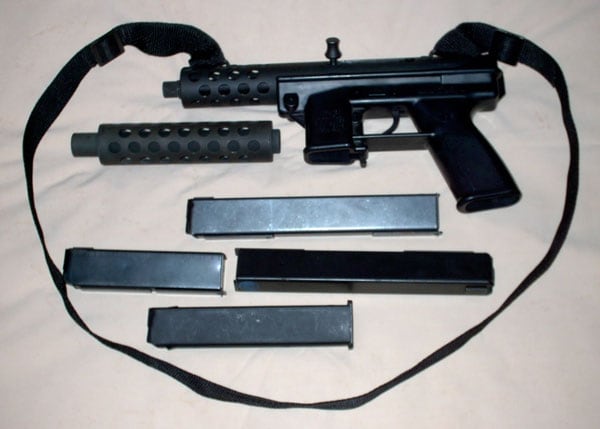 Intratec sold barrel extensions that screwed on to the regular barrel using the already installed threads.

Therefore, the evolutionary chain of this gun was: MP-9 (select fire, open bolt, Swedish made), KG9 (Semi auto or select fire, open bolt, US made), KG99 (Semi-auto, Closed bolt), TEC9 (cheaper KG99), DC9 (TEC9 without barrel threads, California legal for a minute), AB-10, and AP-9 (See TEC-9).  Some would argue that the chain is backwards of how evolution really works, but hey, we are just stating the facts. 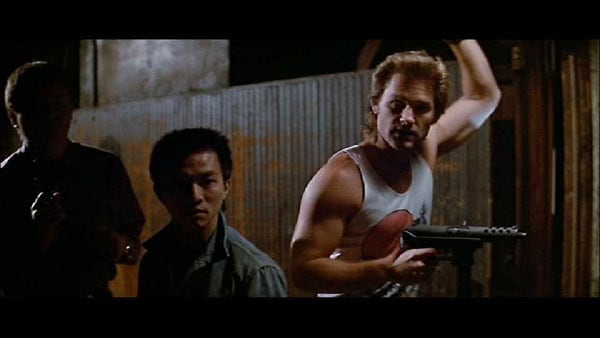 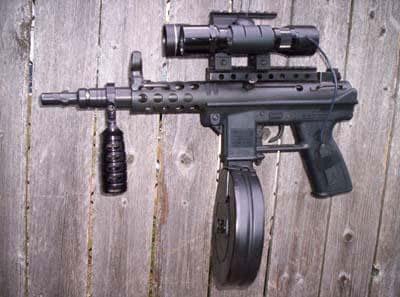 TEC-9s are cheap enough to trick out anyway you like (and still have cash left over for ammo).

The TEC 9 series got a lot of publicity in the press and drew the wrath of the anti-gun movement. It didn’t help that they kept popping up in crime shows and movies, usually in the hands of bad guys. By the late 1980s, it had been banned by name in California and lawyers publicly stated, “While the TEC-9’s 32-round capacity may be an asset in a standoff against the police or in fending off a rival drug gang, it is a liability in the average home defense scenario.”

Talk about blatant gun snobbery and discrimination! Regardless, it was not the gun control crowd alone that smothered the TEC-9; the line did that to itself.

Want some peanut butter with that jam?

The savvy gun public never took these guns seriously. Made of stamped metal and polymer with a rough cheapy finish, they had to be able to deliver downrange to get any acceptance. Unfortunately, the awkward stance required to aim correctly often wasn’t used, which resulted in most users not hitting anything more than 15 feet away reliably.  This was compounded by the fact that many of the later model guns had misaligned sights that were non-adjustable. 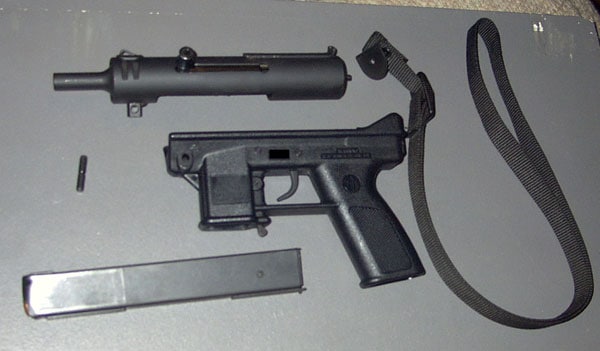 Moreover, since we mentioned the ‘reliable’ word, these guns just weren’t. They typically jammed with a FTF/FTE or double feed once per magazine. This was often due to users gripping the magazine, which already had some wiggle to it, and inadvertently pulling it downward as the gun recoiled. Shooters often said that the ‘TEC’ stood for ‘Trouble with Every Cartridge’.

They were fun for the range, especially if you shot at the dump with your friends, but not dependable if needed for personal defense in any encounter past the first round. In the end, it was just a gun without much of a use, which is what really led to its final demise.

Its unknown just how many of these guns there are out there but they are extremely common. Intratec alone made over 200,000 of the basic model from 1985-95. The TEC-9’s MSRP was $260 and often sold for quite a bit less than that. In their prime during the early 1990s, I remember going to a gun show and seeing a dealer with a table full of these polymer roscoes, selling them for “$299 Buy One Get One Free”. There was a momentary spike in these guns during the AWB (1994-2004) as they were ‘Pre-Ban’ and thus immediately coveted.  Since then the market has corrected itself on these 80s wonders, and you can often find them for close to the original MSRP. 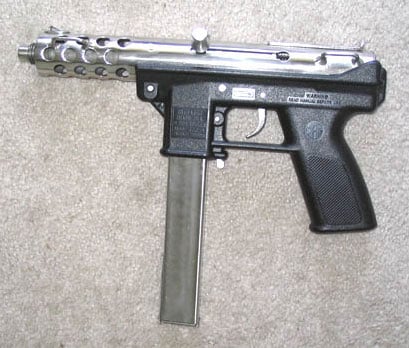 TEC-9s were offered in chrome…

The TEC-9s older brother, the better-built KG-99 often sells for about $400, while the open-bolt 1982 vintage KG-9 goes for up to $800. On the flipside, prices for AB-10s and AP-9s are whatever someone is willing to pay. Prior to 1986 a few select-fire KG9/TEC-9s were made or converted and are a completely different animal, usually going for $7K due to the pray and spray button.

There are any number of used TEC-9/AB-10 semi-autos adrift on gun buying websites at any given time in the $250-$350 range. While not guaranteed to be reliable, as long as you are buying it for plinking and not planning to storm a Taliban hideout Leroy Jenkins style, they are fun little guns. With prices like that and the supply cut off, these guns may turn into a collectable in the near future. 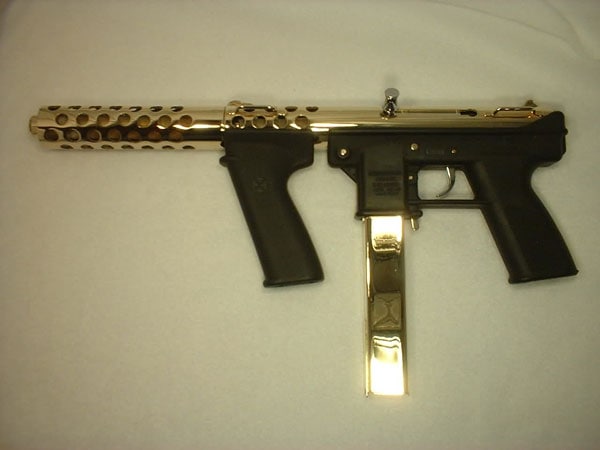