NAA Mini Revolvers: Five rounds of 'Get off me!' (VIDEO) 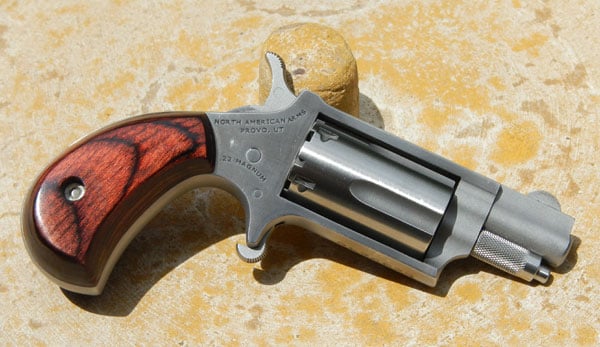 Guns come in all shapes and sizes from behemoth Dirty Harry hog legs down to pipsqueak pinfires. On the small end of things is the North American Arms Mini Revolver, but don’t let its size fool you into thinking it’s unloved.  These minis are plenty popular, plenty powerful and plenty useful. 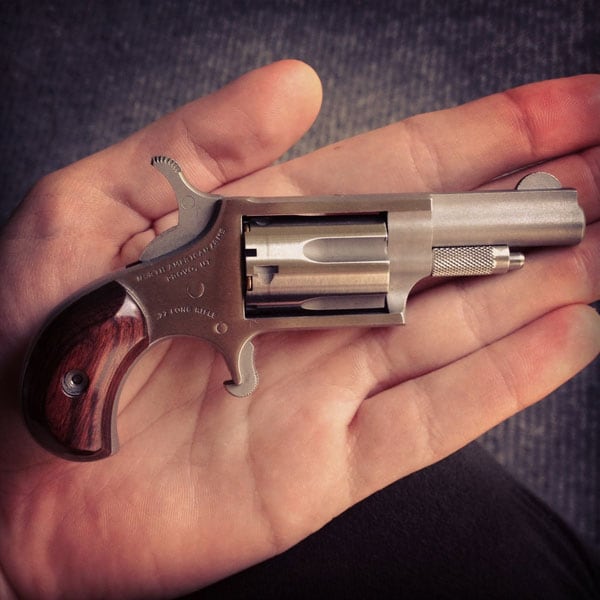 North American Arms revolvers are truly meant to fit in the palm of your hand.

Wayne Baker and Dick Casull started Freedom Arms in Wyoming in 1978. It may seem strange, but Casull, famous for super-high powered handgun rounds like the notable .454 Casull, also had an affinity for tiny guns. Freedom Arms began selling a small, single-action revolver that fired .22-rimfire ammunition. While this wasn’t new, heck Bill Ruger had been selling his Single-Six for 20 years before then, what was innovative was the size.

Using a derringer-sized frame but substituting a five shot cylinder for the old-school double barrel, this shrunken revolver came to the party with a 300% increase in firepower. A birdshead grip gave just enough purchase for the user with a strong two-hand grip to keep the revolver from making like a salmon jumping upstream when it went off. Diminutive post and notch sights proved accurate enough to still hit the target more often than not from 7-yards. 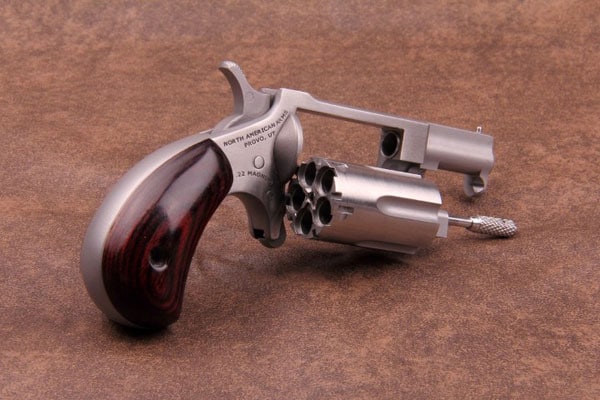 To keep things as simple as possible, the revolver takes a page from the old 1840s Colt wheelguns and the entire cylinder comes away from the frame after removing the center rod. The cylinder is then loaded/reloaded, set back into the frame, and pinned into position, ready to go. No trigger guard is needed as the spur hammer kicks into a ready position by cocking back the hammer. 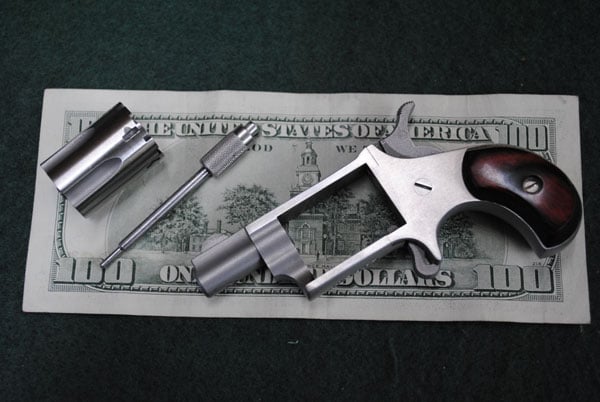 NAA revolver broken down. Sometimes, you can pick one these guns up used for the price of the mat under this one.

With such a small wheel gun, the inner workings of the revolver’s hammer/trigger system look like they belong in a clock rather than a firearm. As such, the gun requires special jigs to fully assemble if taken completely apart, so keep that in mind if you ever take that side plate off. It’s best to leave cleaning to the basics of what you can get to with the cylinder removed. 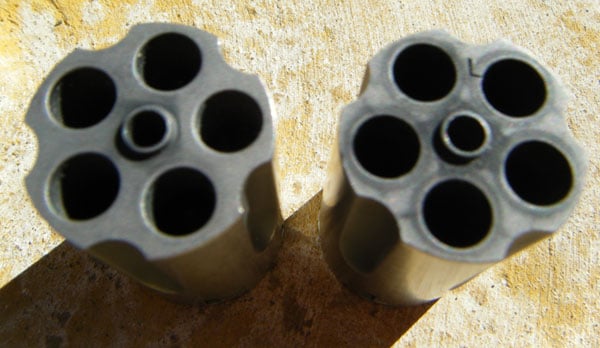 .22 LR cylinders can be distinguished from WMR ones by the ‘L’ on the face. 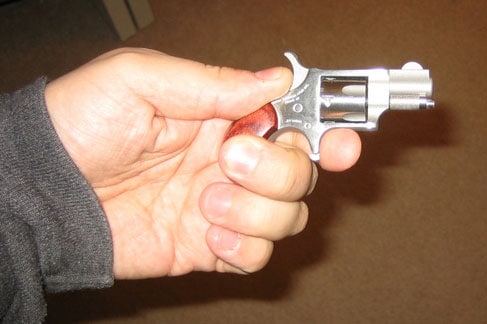 Freedom Arms sold their mini-revolver for more than a decade, selling the design to North American Arms in 1990. Since then, NAA took the original FA ‘Patriot’ and has run away with it. Improved with safety-notch cutouts on the cylinder rear, which keep the gun from going off if, dropped on a hard surface, these guns have proved popular. 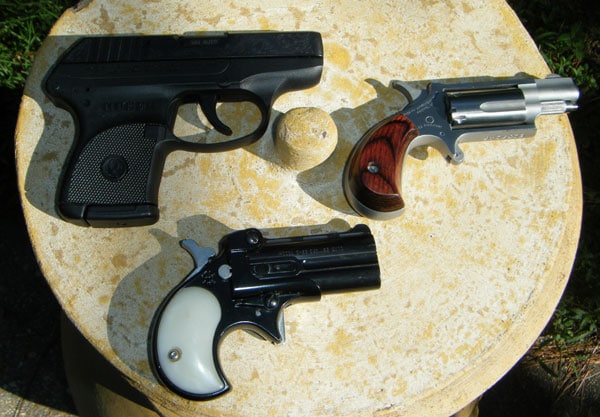 Even compared to a Ruger LCP or a two shot Derringer, the NAA is still smaller.

Smallest is the .22 short model which is just 3.62-inches overall with a 1.12- inch barrel. Weight, loaded of this gatt is 4-ounces. For reference, the weight of $0.39 cents in pennies is about the same. While it’s not the smallest revolver in the world, that title going to the Austrian Mini Gun at 1.5-inches overall ounces, its far outclasses that 2mm in caliber. When compared to the 5.16- inch, 10-ounce Ruger LCP, the Mini Revolver is downright pint-sized. 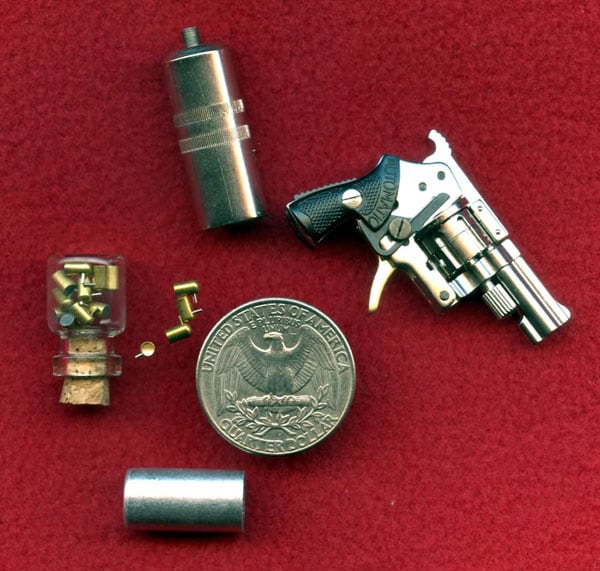 Though there are smaller guns out there like this 2mm pinfire, these guns are novelties only and not effective in any self-defense capacity, unlike NAA mini revolvers.

Nevertheless, about that punch thing…

These miniature revolvers generally are all tiny-barreled guns chambered in rimfire calibers. Now no one ever claimed the .22 was a big game round and the short barrel of these guns further handicap the round by not letting it build up speed before escaping the muzzle. Nevertheless, rimfire rounds with the proper shot placement are very deadly as any inner city ER doc can tell you. While you won’t hear Massad Ayoob champion carrying a .22 anytime soon, they can be effective in a NAA at close range. 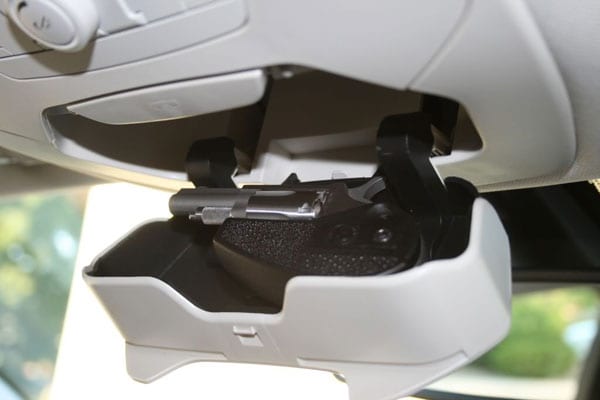 NAA Black widow, hiding in a car’s sunglass case. Because of their size, NAA mini revolvers make great back up weapons.

Fifth pocket carry or even shirt pocket carry is possible with the Lilliputian lead-slinger.  No matter how much you try, you just cannot fit an LCP or Bobcat comfortably into the change pocket of a pair of blue jeans. This factor leaves a steady market for these guns as ‘get off me’ pieces for when something larger just won’t work. One woman was recently arrested and charged with keeping one of these guns in, um,… deep concealment. 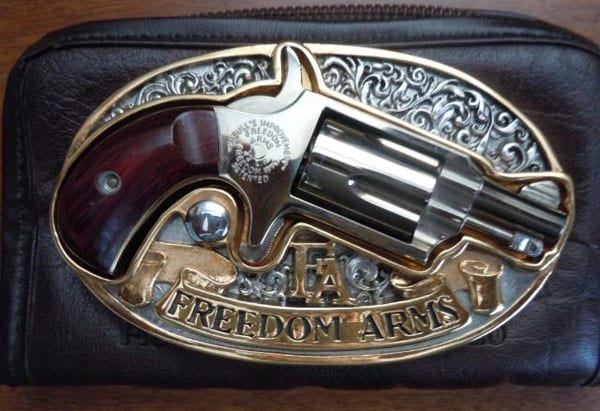 This original Freedom Arms mini revolvers in a novelty belt buckle is suggestive of these guns “cult” collectors status.

With these being in production for 35 years, they are common. Not only are they good concealable weapons, they also have a fair bit of collector’s interest as novelty pieces. The original Freedom Arms guns have no safety notch so be sure to carry them with the hammer down on an empty cylinder. They will be marked “Freedom Arms Casulls Improvement.” These guns, largely because of the Casull relation coupled with their vintage (the newest ones are 24 years old) can garner over $300 if found NIB. Again, if you use one of these, safety first. 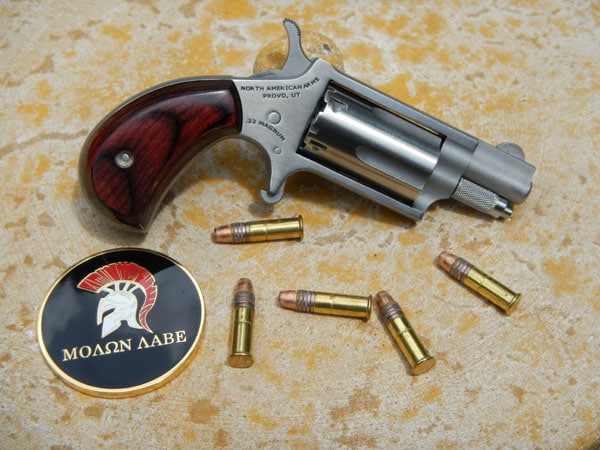 Early NAA mini revolvers will be marked “Newbury Park, Calif,” and like the FA guns will not have safety notches in the cylinder. This is not a problem though as NAA is good about retrofitting these. Used examples in good condition start at about $125 while NAA MSRPs their myriad of models anywhere from $200-419.

You can be sure there is one sitting quietly in a pocket near you.