The Belgian Vigneron Submachine gun: Reaper of the Congo 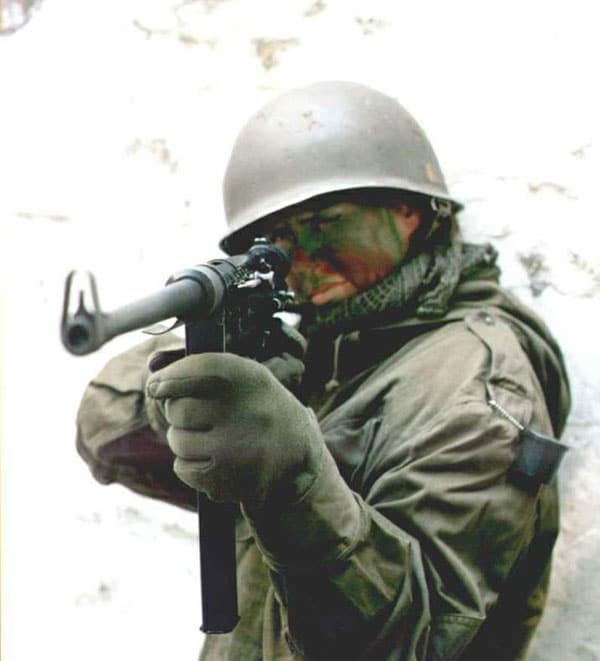 Looking into the business end of a Vigneron submachine gun.

Sure, it looks like a M3 Grease Gun mated with a German MP40 while a Tommy gun watched, but it is a totally different gun. It’s the nearly forgotten Belgian Vigneron and it’s a bargain subgun if there ever was one.

The Belgian army of the 1950s was rebuilding. Suffering a five-year-long occupation during World War 2, the military of that country had to be rebuilt from the ground-up. Before the Germans came in, Belgium had a large and healthy arms industry centered on Fabrique Nationale (FN/Browning) in Herstal. Inheriting a collection of captured German weapons and 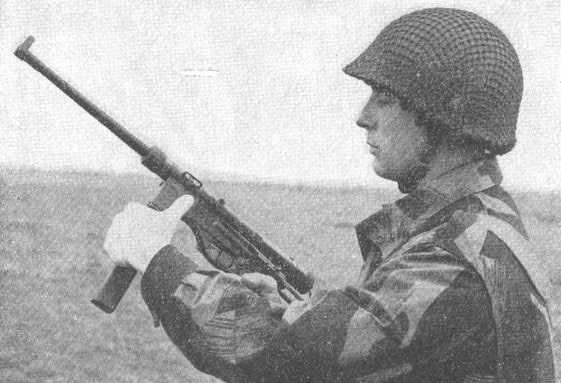 donated US surplus guns, the Belgian Army wanted something new.

By 1954 they had adopted the Browning Hi-Power as their standard handgun and the new (Belgian designed) FN-FAL as their standard rifle, but they still needed a submachine gun to equip those who needed some compact spray gun action such as artillerymen, paratroopers, truck drivers and the like. For this need, a local Colonel by the name of Vigneron threw a design into the ring. 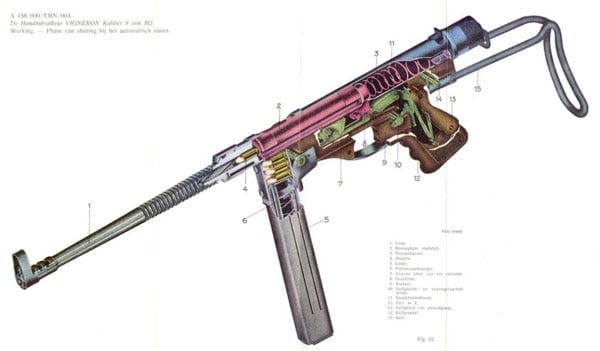 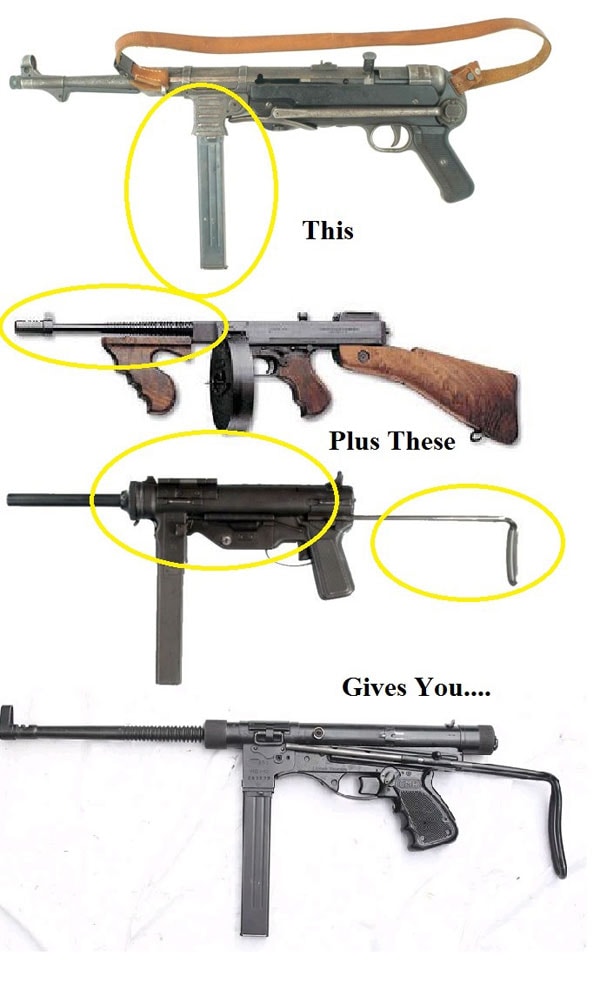 Georges Vigneron, a local politician and reserve colonel in the military police, came up with an interesting design that borrowed heavily from what the Belgian army was already used to. Like the M3 Grease gun, which was afloat in impressive numbers in Europe at the time, Colonel Vigneron based his gun on a simple sheet metal stamped tube receiver using a blowback action. Also like the M3, the gun had a hinged dust cover over the ejection port that had to be opened before firing. The lower had a basic plastic handle with a Colt 1911-style grip safety.  All told, the gun came in at 8.1-pounds with a full 32-round magazine of 9x19mm NATO, strap, and stock.

Designed to be as compact as possible for storage when not in combat, the Vig could collapse or even remove its folding stock, giving it an overall length of just 24-inches. When its stock was fully open, its total length would rise to a manageable 28-inches, still smaller that an M1 carbine while still giving it an accurate 22-inch line of sight.

… the German MP40, especially in the lay-out and profile.

The guns distinctive barrel, which measured 12.05-inches from the end of the compensator muzzle to the beginning of the chamber, had six right hand groove rifling on the inside and a pattern of very tight cooling fins along its outside. This gave it a look similar to the early 1920s Thompson submachine guns. In a clear imitation of the Tommy guns Cutts compensator, the Vig had a ported muzzle break that helped channel recoil forces to keep this Belgian dragon on target. 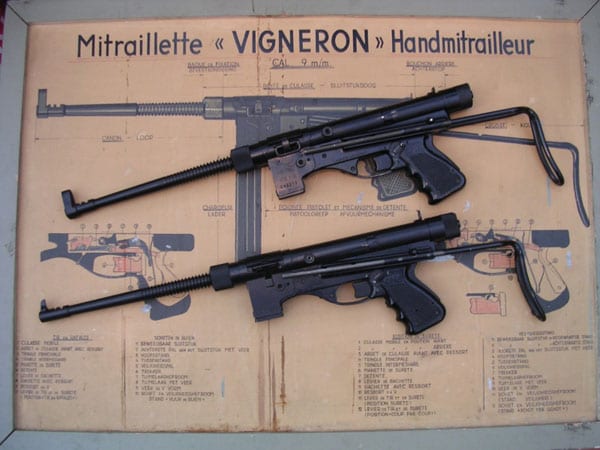 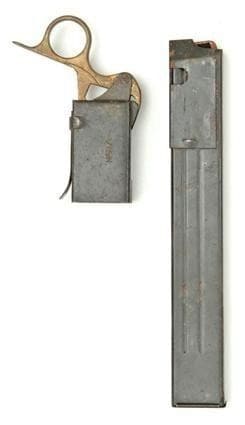 It had a standard three-position (no pew, pew, pew pew pew) selector switch. In full-auto mode, it was controlled much like the German MG34 machine gun not by a switch but rather by the trigger. If you pulled the trigger one way, you got semi-auto shots. Pull it another and you had instant rock and roll at 620-rounds per minute. As far as we can tell, no other subgun had this interesting design.

The Vigneron uses a 32-round 9mm magazine that looks about 99% like that of a German MP40. In fact, most accounts state that the MP40 mag could be used in the Vig’s well with no problems. This was a good idea because in the 1950s, surplus German mags were available for their weight in scrap metal. The guns were supplied with a magazine loader that looked cloned from the British STEN design. 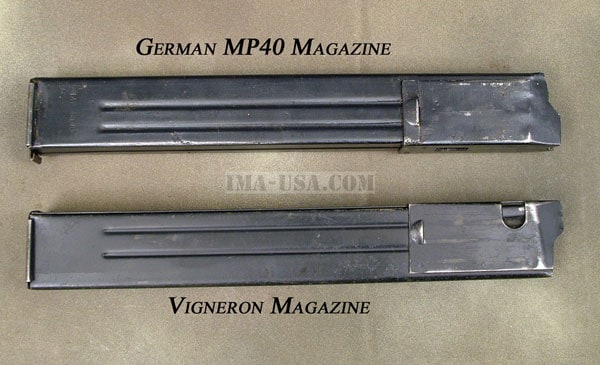 The gun competed against several other designs successfully and was adopted by the Belgian military in 1953. Built by Societe Anonyme Precision Liegeoise in Herstal just down the street from the FN plant, the gun remained in service with the army of this small NATO country through the 1990s when it and the 7.62x51mm FN-FAL were replaced by the 5.56mm FN-FNC assault rifle. The gun was made in two different models, the M1 and M2, with the main differences being in the sights. 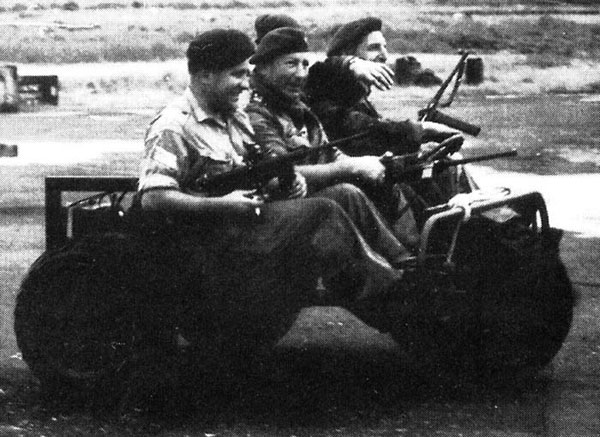 Belgian paracommandos on a tike with their trusty Vigs. Photo taken in 1964 around the time of Operation Red Dragon. 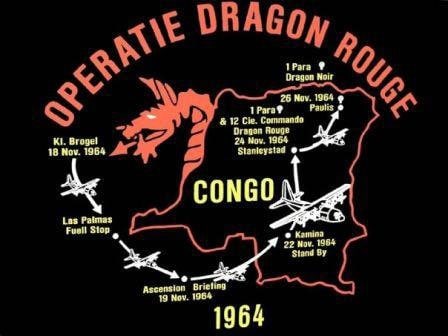 While you don’t think of Belgium as mixing it up in modern combat much, the Vig did see a fair amount of use. Thorough the 1960s and 70s the hard-bitten soldiers of the Paracommando Regiment saw a lot of tense times and sharp fighting in the former Belgian colony of the Congo-Kinshasa/Zaire. This included saving over 2000 Americans and Europeans during the Simba Rebellion in 1964 (Operation Red Dragon) and another 2000 during the Kolwezi affair in 1978.  There were also actions in Rwanda, Burundi, Somalia, and other exotic African hotspots where the Vig, in the hands of quiet Belgian paratroopers, had a chance to make friends and influence people. 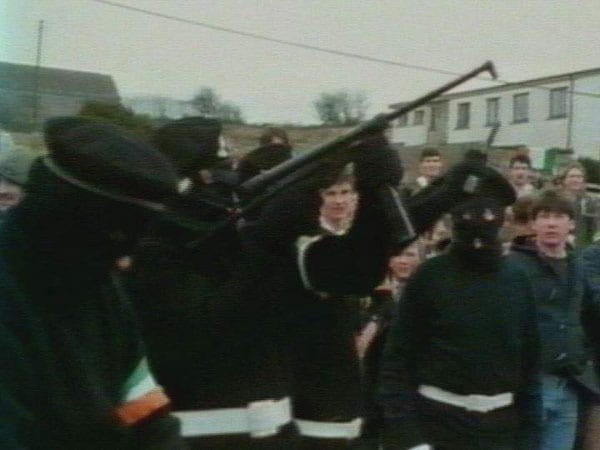 IRA members in the 1980s brandishing a Vig subgun. Note that the barrel is assembled upside-down. Nobody ever said the IRA were experts in Belgian weapons.

Besides such use, a few surplus and civilian market models appeared in places as wide-spread as South Vietnam, Northern Ireland (at the hands of inexperienced IRA terrorists), and the former Yugoslavia. Although finally withdrawn from NATO service, it’s still not unusual to see these simple subguns appear in footage from Central Africa, still making friends. 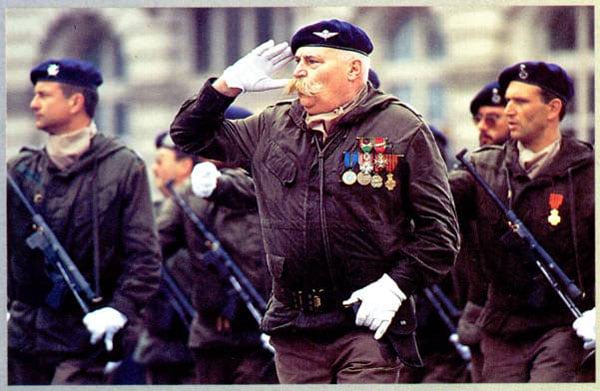 The Vigneron remained in service with the Belgian Army all the way through the 1990s. 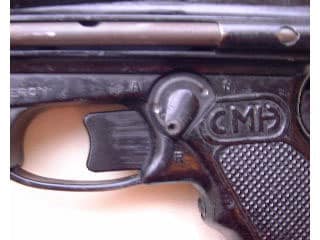 Vigs have a very distinctive CMH mark on the grip, courtesy of a subcontractor.

This is probably one of the hardest subguns to find in the US that ever was in production. While there are a few that occasionally show up on Class III gunboards, they are often rewelds and not original guns. The reason for this being that few were exported until after the Hughes Amendment cut off private fun gun sales in 1986. Before that, the Belgians still had most of their Vigs in storage just in case WWIII broke out and the Soviets came rolling through Brussels looking for a good deal on waffles. 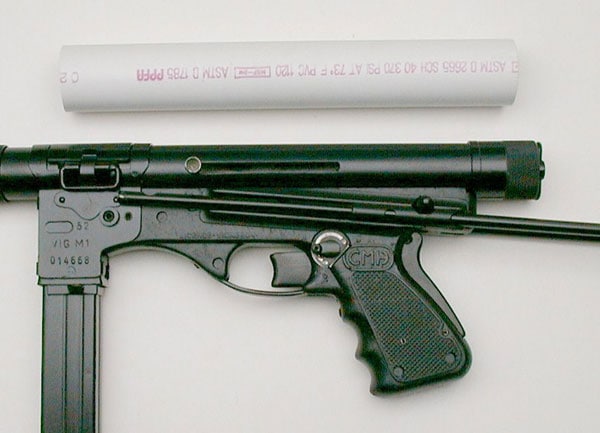 However, parts kits for these guns, brutalized by nearsighted torch-wielding maniacs, were available in quantity for several years in the 1990s for as low as $100. These still can be found if you look hard enough for around $250. These can be made into legal semi-autos very easily with the right paperwork. They are also super popular for those who would go the dummy gun route, with a black-painted piece of PVC pipe being substituted for a receiver tube. IMA sells dummy display guns for $350 built on torched parts kits should you want to avoid your own weekend project.

On the other hand, you can always go to the Congo, and try to make some new friends.