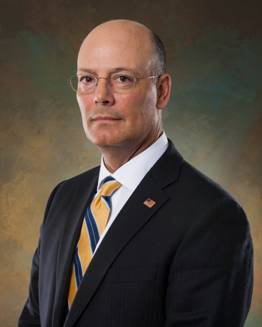 The nation’s gun lobby announced on Tuesday that Douglas J. Hamlin will serve as the new executive director of NRA Publications effective immediately.

The former director, Joe H. Graham, retired after 14 years of being the media head-honcho leaving a big hole to fill, as the position makes one responsible for the “editorial quality” and “market success” of all the NRA’s numerous magazines and media-related entities.

It appears Hamlin got the nod for his business acumen, media prowess and publishing experience.

“I am very pleased to have Doug Hamlin joining our ranks,” said Wayne LaPierre, executive vice president of the National Rifle Association, in a press release.

“Doug has a proven track record of executive level publishing, marketing and sales management and, with decades of professional experience in the outdoors industry and in the publication of specialty magazines, he is eminently qualified to lead NRA Publications into the future,” added LaPierre.

Hamlin founded and worked as CEO for the California-based autoMedia Solutions, Inc., which runs the automotive information website www.automedia.com.

As far as his experience in media and publishing is concerned, Hamlin worked at Petersen Publishing Company for 14 years at various sales and management positions, served as that he vice president, group publisher of Motor Trend magazine from 1995-2000 and was publisher of Guns & Ammo magazine from 1991-1995.

Hamlin seemed delighted with the new opportunity to be at the helm of the NRA’s print and web publications, which include: the NRA’s official journals American Rifleman, American Hunter and America’s 1st Freedom; Shooting Illustrated, a newsstand magazine; NRA Family Insights for junior members and their families; and Shooting Sports USA for competitive shooters; as well as four websites, two e-newsletters and the American Rifleman Television Show.

“I am humbled and honored to serve the loyal membership of the NRA,” said Hamlin, who served as a U.S. Marine officer from 1980-1986. “My goal for the future is simple: to provide our readers with the finest recreational shooting sports journals and websites in the outdoor publishing industry.”

Meanwhile, at least one advocate for tougher gun laws expressed a degree of resignation about the new hire’s capacity to change they way the NRA covers the shooting industry and gun community.

Ladd Everitt, Communications Director at the Coalition to Stop Gun Violence, was unfamiliar with Hamlin and his resumé but quipped to Guns.com in an email, “I doubt he could make America’s 1st Freedom worse.”

Time will tell what Hamlin has in store for the NRA faithful, which is at least 5 million strong.