HAFDASA Carbines: Don't cry for them, Argentina, the truth is they never left you (VIDEOS)

If we told you 80-years ago, someone designed a compact rifle that held a fifty round box mag, used a one-piece aluminum lower receiver, and could be made on the cheap, would it ring a bell? Surely, you would have heard of this gun, right? Well it’s the C series Ballester Rigaud made by the HAFDASA company of Argentina—and unless you’re a serious gamer odds are you probably haven’t.

Why was this gun made? 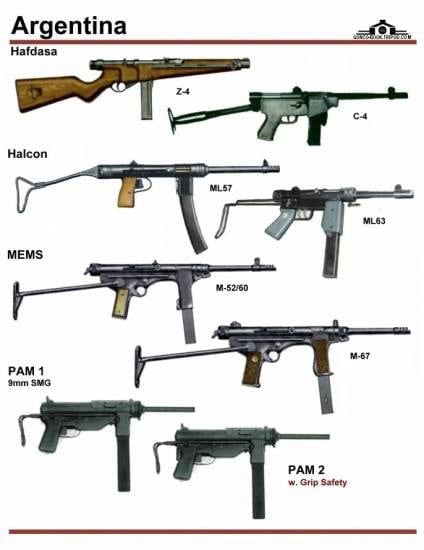 Though it may be easy to forget for North Americans, Argentina has had a long history of rolling out there very own subguns.

In early 1930s Argentina, the Policia de la Capital, in charge of securing the government buildings in Buenos Aries, got a shipment of Italian-made Beretta M1918/30 submachine guns.  The story goes that admirals and generals on duty in the capital had the opportunity to see the neat little Berettas and wanted something just like that for the Argentine military. Catching wind of this, a local company went about coming up with something to show the good local purchasing agents. This lucky firm was HAFDASA. 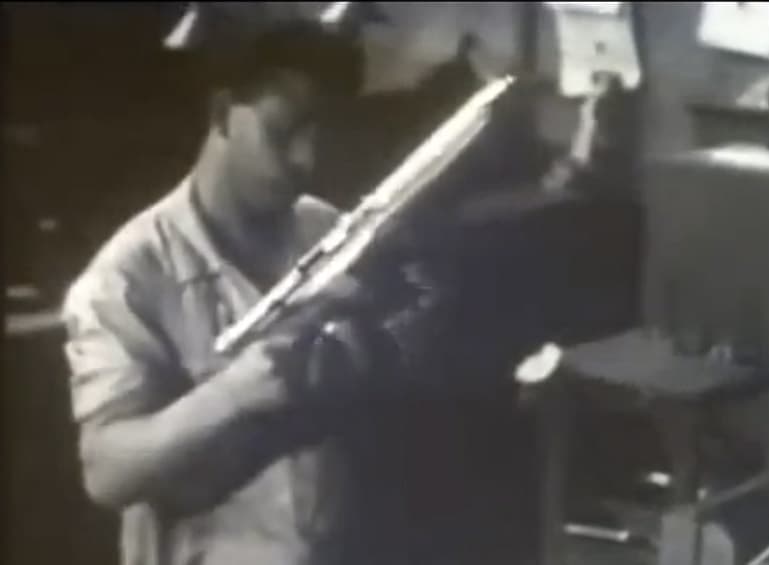 HAFDASA employee checks a C-4, right off the assembly line.

Who is a Haf Dasa?

At the time, one of the top international engine makers for both cars and airplanes was Hispano-Suiza. The Argentine maker of Hisso engines was “Hispano-Argentina Fábrica de Automóviles S.A.” (HAFDASA). Some of the bestselling (and locally made) trucks and cars on the streets of Buenos Aires were HAFDASAs. The two heads of the company were Arturo Ballester and Eugenio Molina, and in they were very interested in moving into making firearms. 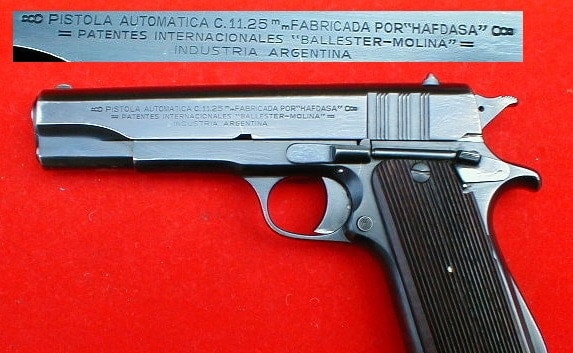 You may recognize the HAFDASA name from the Ballester Molina pistol.

The company’s brain trust was firmly held in one Rorice Rigaud. This Frenchman had a knack for firearms design– especially if he had something to look at as an example. He would be the one who later figured out the Ballester Molina .45ACP handgun for HAFDASA based on lessons he learned from the Star 9mm and Colt 1911.

Taking a Beretta M1918/30 subgun and drawing inspiration from it, he cooked up a series of new pistol caliber portable carbine. Called a subametralladora in Argentina, the gun that Rigaud came up with was a traditional strait blowback design that fed from an alternating bolt. What we mean by alternating bolt is that it could fire from the left hand side of the gun, or the right. If we haven’t lost you yet, this is because the gun had a magazine with two sets of feed lips.

Given the time period, C series Hafdasa carbines take some of the oddest magazines every seen in all of Gundom.

Yes, that’s right, the magazine had twin double stack mag internals enclosed in a single, brick-shaped, body. It could hold either 45-rounds of .45ACP or 50-rounds of 9mm, depending on the weapon’s caliber. The same idea as a jungle-clip but without the tape. To switch from one magazine supply to the other, the user rotated the bolt to the other side of the receiver-top. To keep the huge mag well free of debris when the gun wasn’t loaded, it had a spring-loaded dustcover that had to be flipped open to insert a magazine. This would obviously make speedy magazine exchanges hard, but hey, you had 45-rounds of .45ACP in 1938, what more do you want. To keep the troops from zipping through them too fast, the Rigaud designed these guns to be semi-auto only.

If the oddball mag isn’t enough to flip your lid, the lower receiver of the gun was crafted from a single aluminum casting. The casting could be painted in any color desired or left ‘in the white’ for flashier occasions. This isn’t surprising as HAFDASA was working on several aluminum applications for their automobile and aircraft lines. 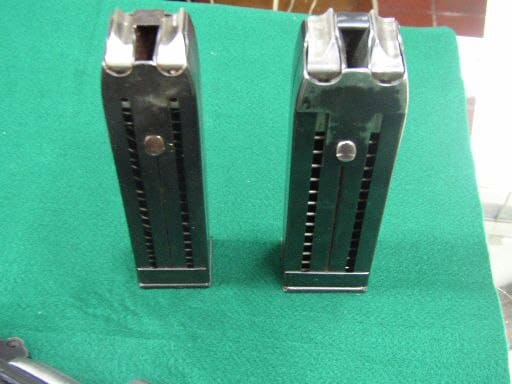 The upper was a basic tube-style subgun body as seen in just about every gun of this type from that time (STEN, Vigneron, M3, Lancaster, et al).  A buttstock, of either wood or metal, or bayonet could be fitted if needed. The company was at the same time working on a contract to rework some of the Army’s 1891 Mauser Rifles so they took that rifle’s bayonet and designed a mount for it to fit the C-series subguns. This is possibly the only submachine gun we know of that carried a pre-WWI pattern bayonet. 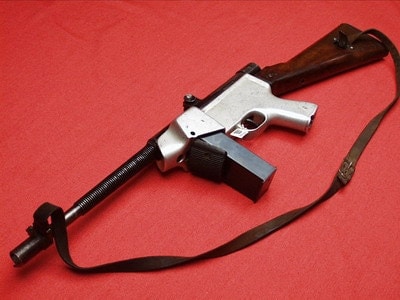 The guns were originally referred to as the “Carabina Modelo Ballester Rigaud’ but this was abandoned shortly after Rigaud left the company. Hafdasa’s carbine/subgun series was named the Criolla (Spanish for Creole- or ‘Native’) with each model in the series given a number. Hence, there was the C-2, C-3, C-, well you get the idea. All shared the same action but with different options such as stocks and furniture. Even though the gun was designed as a semi-auto only, some were reportedly supped up and made full-auto after Rigaud split. 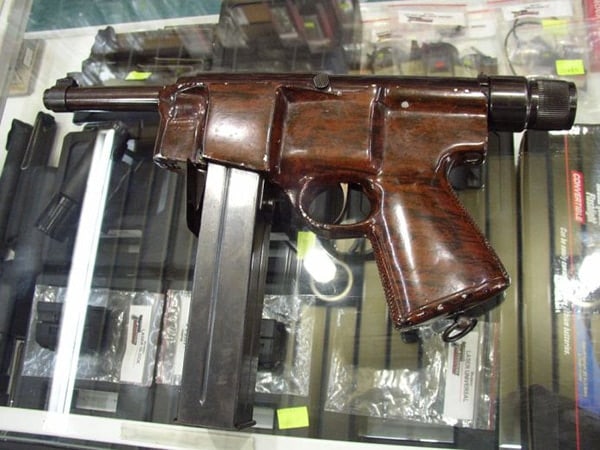 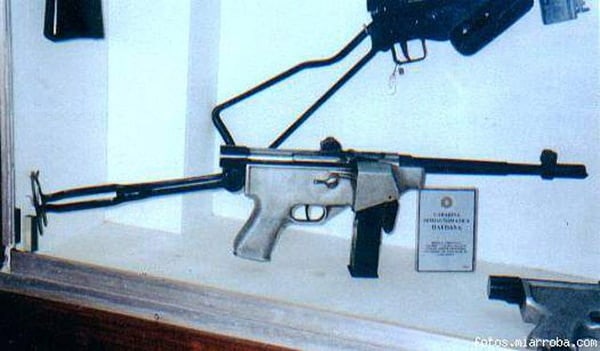 The one piece wooden stocked Z-4. 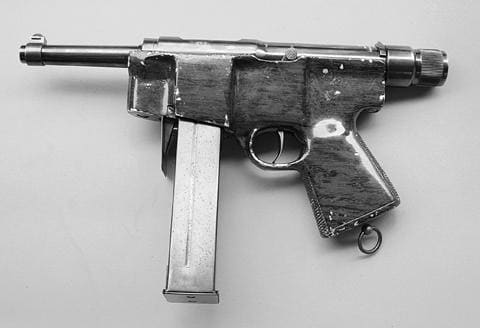 The C-2 was a super-shorty design similar to the Micro-UZI or MAC-10 of today. With its short barrel and lack of stock, it was meant for tank crews and vehicle drivers. The C-4 had a folding skeletonized metal stock or a detachable wood stock. The Z-4 had a one-piece stock that looks like the thing of a Steampunk-addicts object of obsession.

They were adopted by the Argentine military and police in 1939 and used in small numbers. The Argentine navy seems to be a big user as most pictures of the C-series gun seen ‘in the wild’ are taken from parades of naval personnel. In fact, a beautiful 1930s-era HAFDASA C-4 rifle ‘in the white’ was photographed in the hands of naval academy cadets in a 2010 parade. 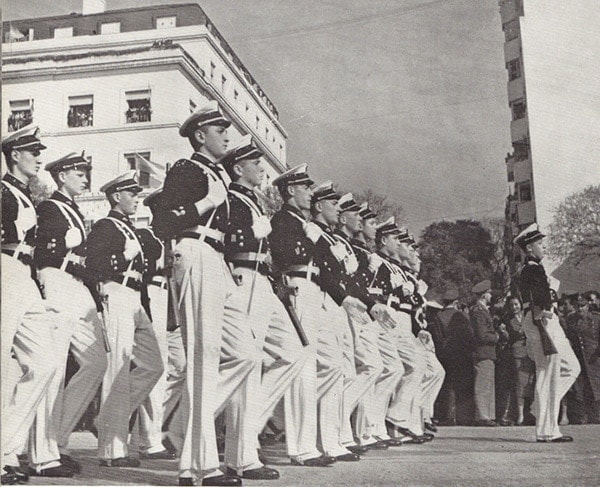 HAFDASA C4 on the march with naval academy cadets in Argentina, 1950s. 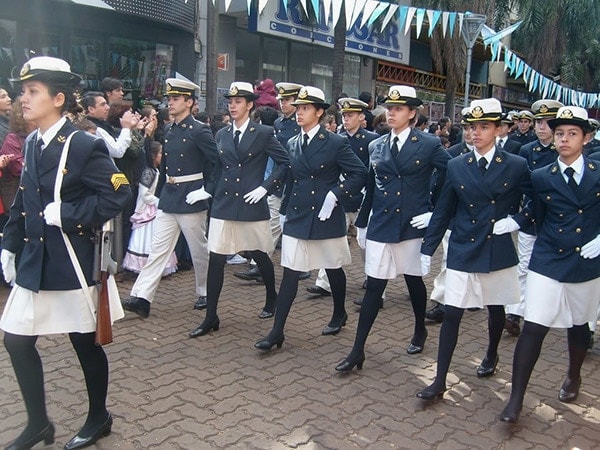 And a more recent picture of Argentine navel academy cadets. The one in front is toting a C4.

These are one of the rarest subguns in the world. With an estimated 2000 made by HAFDASA before WWII, the limited number of these guns out there have undoubtedly seen hard use. They are nonexistent on the surplus market in the US. In fact, we aren’t even sure there is a single one here in the states, as we can’t find any through auction sites, machinegun forums, or the NFA bulletin boards.

A number of HAFDASA subguns are on display at the Museo de Armas de La Nación in Buenos Aries.

It seems, other than becoming a cadet at the Argentine Naval Academy and waiting for parade day, the closest you can get to a nice C-4 is to play Call of Duty, where the gun appears in a few cases.