Idaho Gov. C.L. Butch Otter on Wednesday signed into law a bill, SB 1254, that would allow certain individuals to carry concealed handguns onto public college and university property, including inside classrooms.

“As elected officials, we have a sworn responsibility to protect and defend the Constitution of the United States—not only when doing so is easy, convenient or without cost, but especially when it is not,” Otter wrote in a statement upon signing the bill. “This legislation challenges us to fulfill that charge, and we will.”

Otter went on to explain that although courts over the years have placed limits on one’s right to keep and bear arms for self-defense, public campuses are not a place where those limitations should factor in.

“The Constitution limits neither the reach nor the protection afforded to lawful carriers of firearms by the Second Amendment,” Otter wrote. “Court precedent has empowered and circumstances have compelled government entities to carve out specific exceptions. This is not the circumstance to carve out another.“ 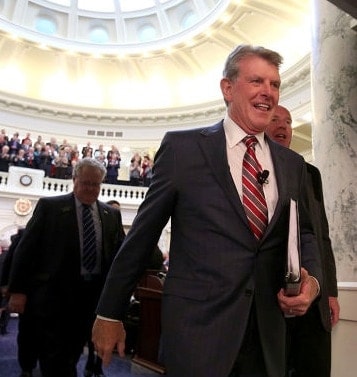 “The people have the right to keep and bear arms, which is a fundamental right we put in our Constitution,” McKenzie said back in January when the law was being debated.

“When someone’s leaving a class at night and going across a dark, empty parking lot, they should be able to protect themselves,” McKenzie told reporters. “We should not take that ability away from them.”

Under the new law, only retired law enforcement or those who possess a valid enhanced Idaho concealed carry permit, which was created in February of last year, can carry onto campus grounds.

Former law enforcement must have retired in good standing, been employed as an officer for at least 15 years and completed concealed carry training within the last 12 months, among satisfying other conditions.

Enhanced permit holders must be 21 years of age or older and be an Idaho resident for at least six months. Applicants must also pass both a criminal background and mental health check and complete a qualifying handgun course, which includes a live fire test of at least 98 rounds.

However, the law still prohibits firearms in student dorms and other housing, as well as facilities which seat more than 1,000 people, such as stadiums and concert halls.

“What we try to do is to make a bill that is fairly restrictive on who can carry on campus but also gives people an opportunity to be able to protect themselves,” McKenzie explained about the compromised approach he took in crafting the legislation.

Yet, despite McKenzie’s effort to create a law that balances public safety with one’s right to self-defense SB 1254 has been sharply criticized by all eight of the state’s public colleges. Many argue simply that guns and college kids don’t mix because of the student’s proclivity to imbibe, while others say that the new law could create confusion that leads to campus lockdowns over false reports of active shooters.

To the critics of SB 1254, Gov. Otter said that his administration along with lawmakers in both chambers will monitor the law’s effect on college life.

“It should be noted that to similarly meet the responsibilities of public safety, to mitigate potential unintended consequences and to assuage the significant and heartfelt concerns expressed by many during this debate, the State of Idaho and the Legislature in particular must appropriately and carefully monitor, oversee and manage those difficulties and costs,” wrote Otter.