Introducing the DB FS Nine, a full-sized handgun from Diamondback 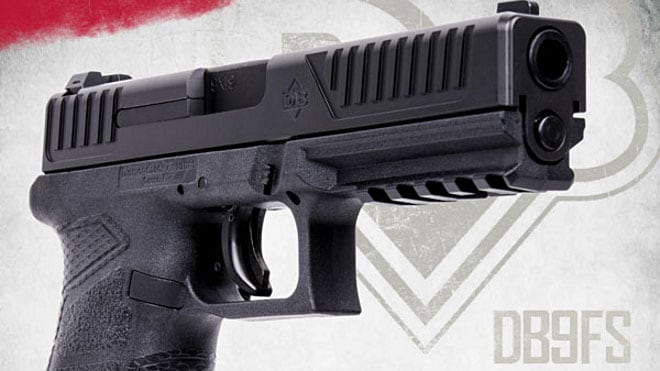 Diamondback Firearms is expanding on their catalog of simple, inexpensive pistols with a first for the company, a full-size double-stack, double-action striker fired pistol for self-defense, range duty and everyday-carry on a budget.

The company has made a name for themselves with their sub-compact pocket and concealed-carry pistols, but has been adding new products to their line-up including AR-15-pattern rifles.

The new DB FS Nine has a respectable 15+1 capacity, a polymer frame and a stainless steel slide. The slide has front and rear serrations that run almost the entire length of the pistol and has a matte black Melonite finish. 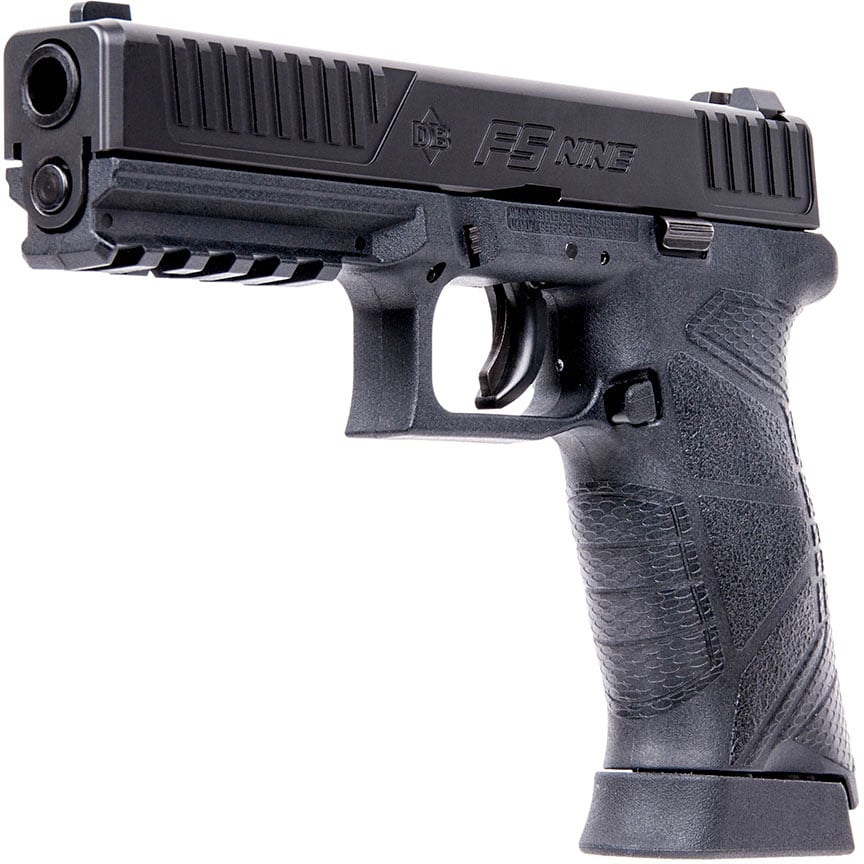 The pistol’s chromalloy barrel measures in at a generous 4.75 inches long and has a Melonite finish to match the slide. Overall the gun measures in at 7.8 inches long, 5.6 inches tall, but is nice and thin at just one inch wide. It is also relatively lightweight at 21.5 ounces, unloaded.

The DB FS Nine has a full-length railed dust cover for accessories and the grip has a light texture for improved traction and an ergonomically-shaped palmswell. The trigger guard is undercut and the grip features a flared magwell for rapid mag swaps. The magazines have an enlarged basepad to assist in loading and unloading the gun and there are small indentations above the basepad in the grip in case the user needs to manually strip out the magazine.

At the top of the grip the pistol has a slight beavertail.

There are no external safeties on the DB FS Nine, like most striker-fired polymer service pistols. It has a passive trigger safety, a small blade on the trigger as well as a firing pin safety that makes the pistol drop-safe. It has a small slide stop that juts out slightly on the left side of the gun and a standard button magazine release on the left side as well.

The manual of arms should be nothing new for anyone with striker-fired handgun experience. The DB FS Nine has standard fixed 3-dot sights. The trigger on the gun has a rated trigger pull of 5.5 pounds and is said to have a light reset.

The pistol sports a couple of modern features, like a  striker indicator that pokes out of the striker retainer plate for tactile confirmation that the gun is cocked and a peep hole to let the user visually confirm if the gun is loaded without needing to do a press check.

Of course one of the biggest attractions of the DB FS Nine is the sticker. This pistol is priced in-line with Diamondback’s other handguns with a suggested retail price of just $483, meaning expect to see it in stores priced around $400.

We look forward to handling this gun and putting it through its paces. Many people trust Diamonback’s pocket pistols when it comes to protection outside the home. With the new DB FS Nine, now they’ll have the option for something to protect them inside the home as well.

For all the details and specifications, head over to the product page.