The Guns of Jesse James... and his Mother

From his birth near Kearney Missouri in 1847, to his assassination just 34 years later just 40 miles away in St Joe, Jesse James lived and eventually died by the gun. A child-soldier, famous outlaw, and legend, the guns he carried were iconic of his time. 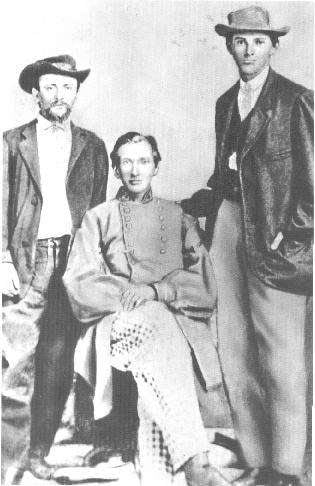 Jesse’s only full brother, Alexander Franklin James—remembered by history simply a Frank—had left home in 1861 at age 18 to fight on the Confederate side in the Civil War with the Missouri State Guard.

The war in Missouri, a border state that never succeeded from the Union, turned bad for Frank and he soon found himself mixed up with a group of guerrillas under William Quantrill. It was this group of Confederate irregulars that 16-year old Jesse joined in 1864, soldiering first under Quantrill, then “Bloody Bill” Anderson until his death and finally under “Little Arch” Clement.

Without supply from the Confederate government, the James brothers and their fellow bushwhackers armed themselves with whatever they could. Often mounted and fighting on horseback in small groups, they needed lots of firepower and in 1864 Missouri, this meant revolvers and shotguns.

The 1851 Colt Navy revolver, in 36-caliber, was popular with the James brothers as was captured 1860 Colts and Remington 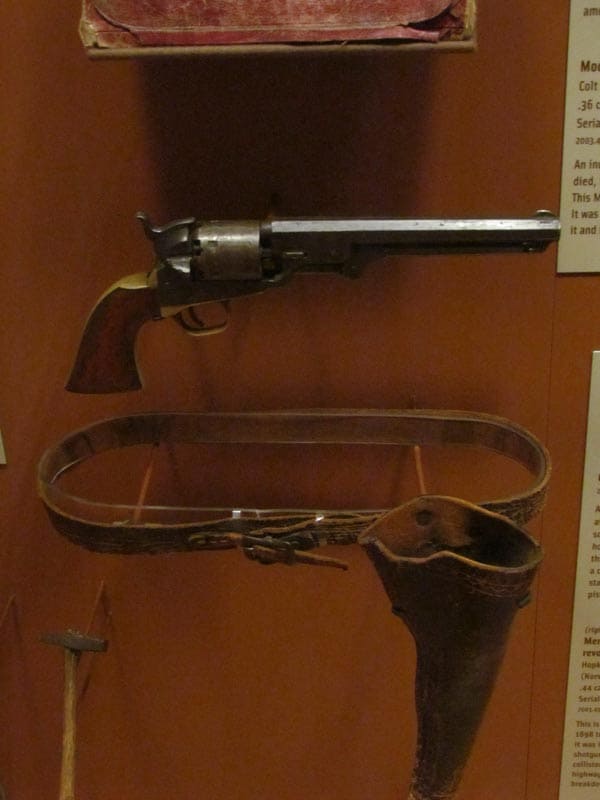 1858s in both their Army (44-caliber) and Navy (36-caliber) variants. With one of these cap and ball revolvers taking as much as two to three minutes to safely reload, the guerrillas took to carrying as many of these as they could and using them ‘New York Reload’ style. This meant firing one dry, then stuffing it in a waistband while pulling out the next loaded one to keep the lead flying. If one revolver was good, two or three were great and in the event you had more revolvers than you could carry, there was always room for more on your horse.

Jesse James spent his teenage years learning to ambush parties from horseback, overwhelm his target with a fusillade of bullets and shot and then speed away as fast as his horse could carry him. This training left young Jesse with a unique skillset when the war ended in 1865. 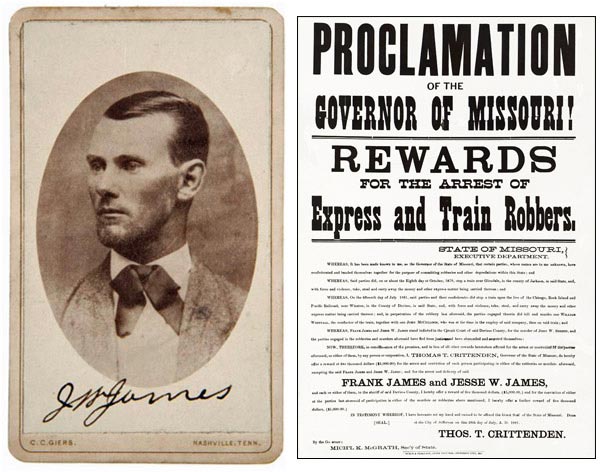 By 1866, Jesse along with his older brother Frank and other paroled guerrillas had returned home to find that their families struggling to survive and branded second-class citizens due to their war service.

In February of that year 10 to 14 men walked into the Clay County Savings Bank in Liberty Missouri just a few miles from the James farm and departed with some $60,000 in greenbacks. It is thought that the James brothers were involved in this and a series of more than 25 other robberies of banks, trains, and stagecoaches over the next two decades.

During this time, it is known that Jesse still carried both cap and ball Colts and Remingtons, the occasional cartridge Smith and Wesson, at least one cartridge conversion revolver, and the occasional Colt Single Action Army.

Shotguns and rifles, including a London-made double barrel and several lever action carbines, passed through his hands as well. 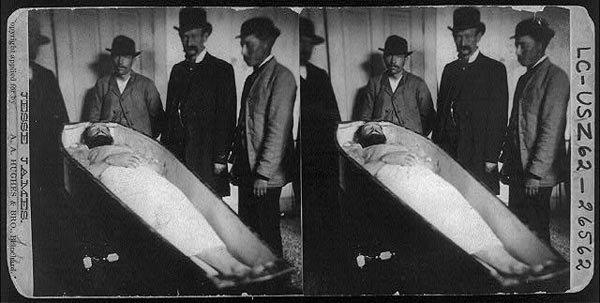 James himself that day was propped up, tied to a board by photographer RG Smith, and his last picture taken. It may have been the first time James was unarmed in public since being a teenager. 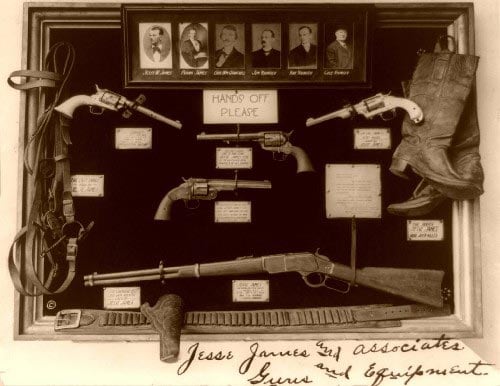 Today several of these pistols, were kept in the James family until 1994 and then made their way to the Frazier Museum in Louisville. In one case, you can see the two mentioned above, as well as one of Frank’s Remington’s and Jesse Junior’s (a robber in his own right) 1890 Hopkins and Allen .44.

Be extremely cautious when finding a gun credited as belonging to any famous person, especially one that is said to belong to Jesse James. There needs to be an ironclad provenance to prove the chain of custody of the gun to even consider the idea.

Even museums are not immune to being taken in on possible James guns. 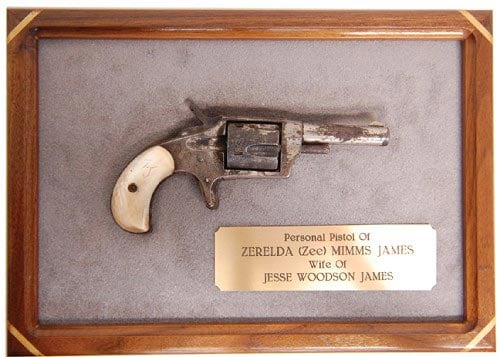 Unfortunately there is the possibility that hundreds of guns owned not by Jesse, but by his mother Zerelda Samuel (she had remarried after Jesse was born), were passed on long after Jesse’s death.

Ever the shrewd marketer, Zerelda frequently passed on any number of revolvers, shotguns, and rifles with handwritten notes vouching them to be ‘my son Jesse’s gun’. Unlike her son, she lived a long a healthy life. Dying at age 86 in 1911, her obituary stated, ‘considering the thrilling vicissitudes of her life, she was exceptionally well preserved and was in fairly good possession of all her faculties.”

Indeed, she even passed on a number of guns manufactured even after Jesse’s death with no doubt a straight face and a sly grin.