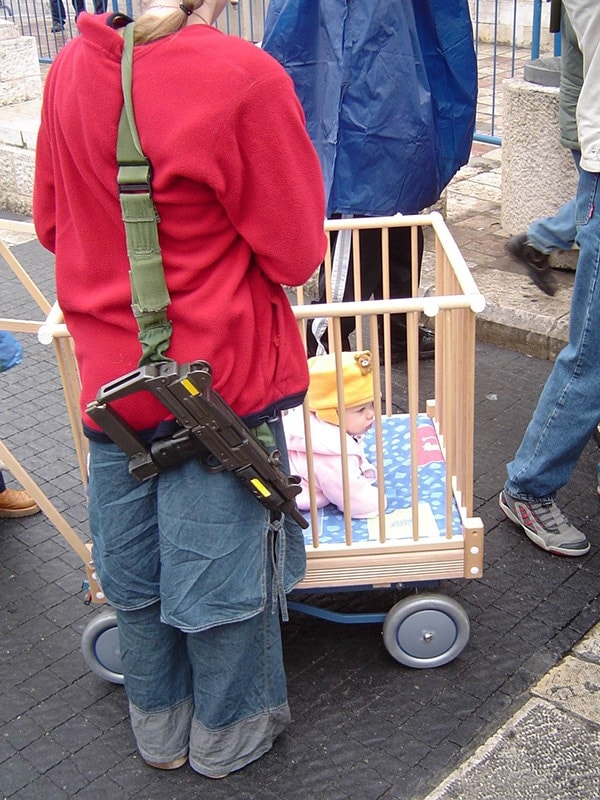 Since 1951, three letters have come to represent a revolution in close quarters combat and a solid candidate for the most recognizable gun silhouette on the planet, so let’s take another look at the Uzi, one of the most successful, infamous and beloved firearms of the 20th century.

In the late 1940s, a nascent Israel faced enemies on all sides. Carved out of the former British colony of Palestine, the country was surrounded by hostile Arab countries that would just as soon see their new nation neighbor stomped flat. Making matters worse, Israel needed weapons to defend against bad intentions and no one would sell any to them, leaving them with no choice but to make their own. And for this, they turned to a young officer with an interesting background.

The man behind the gun 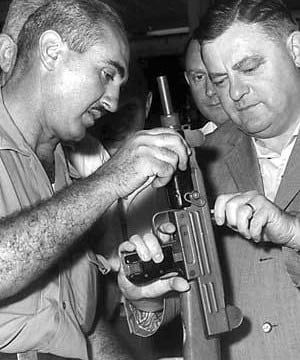 Uziel Gal, left, explaining his gun to an interested party.

You wouldn’t think it true but the story of the Uzi submachine gun, Israel’s best-known military weapon, started in Imperial Germany. During World War 1, Kaiser Wilhelm’s immense military machine contained a large percentage of German-born Jews; ironically, the officer who awarded Adolf Hitler his Iron Cross was Lt. Hugo Gutmann, a Jew. One of the Kaiser’s Jewish officers was Erich Glas.

After the war, Glas, a decorated soldier and pilot, correctly anticipated that Hitler’s Nazi party’s 1933 rise to power meant hard times for European Jews. Glas left Germany in 1934 with his family for Palestine, then a British colony that was to become what we now know as Israel. His son, Gotthard Glas, was just 10 at the time.

Young Gotthard changed his name to the Hebrew-based Uziel Gal (which means roughly ‘strong wave’) and by 1948 was an officer in the newly formed Israeli Army. Moreover, Uziel was working on a gun for his army.

It should come as no surprise that the 1940s Israeli military had access to a diverse collection of submachine guns from around the world. From the British they had STEN, Lanchester, and Sterling model guns. From old German stocks bought on the black market, they had MP38 and MP40 subguns. Captured from the Arabs they had a number of Warsaw Pact guns like the PPSH and the Czech made CZ Sa vz.23 burp gun. From all of these Uziel took inspiration. 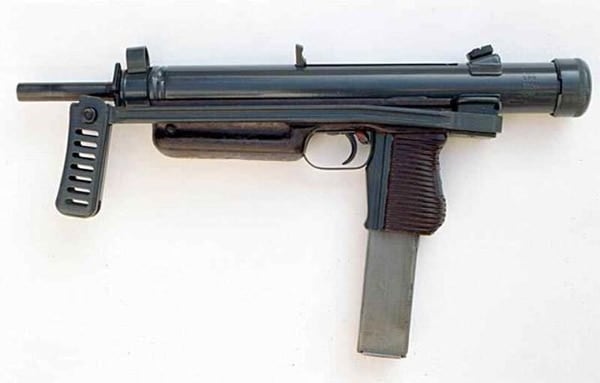 The CZ Model 25 was visually the inspiration for the Uzi. 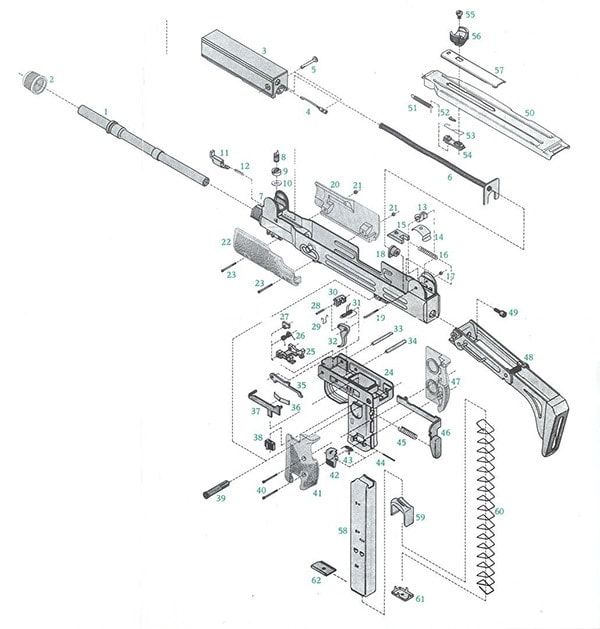 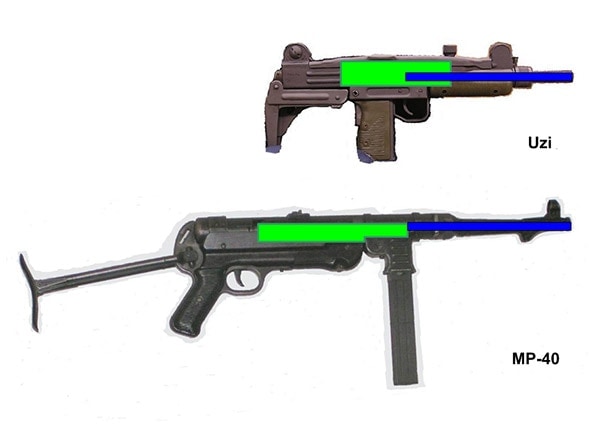 Telescoping bolt internals. Note the differences between the Uzi and other designs that use this concept.

The Lanchester provided a short wooden stock. The MP38/40 provided a vertical double-stack 9mm magazine. From all of these he borrowed the simple blowback action that fired from an open bolt. Finally, from the vz.23, Uziel examined and fell in love with its telescoping bolt and the concept of feeding the vertical magazine through a central pistol grip.

In concept, a telescoping bolt sires a more compact gun and by wrapping the bolt around the barrel, Uziel was able to create a 17.5-inch long gun with a 10-inch barrel.  With a detachable wooden stock, the whole affair was just over 2-feet long. 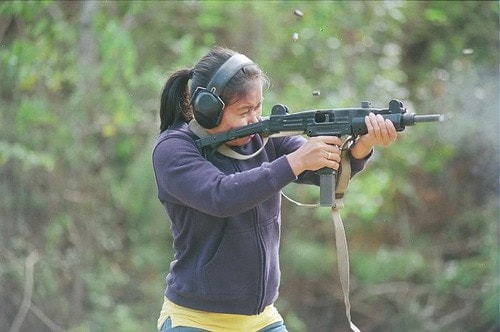 Letting an Uzi rip. Note the low recoil and high cyclic rate with four casings in the air at once. 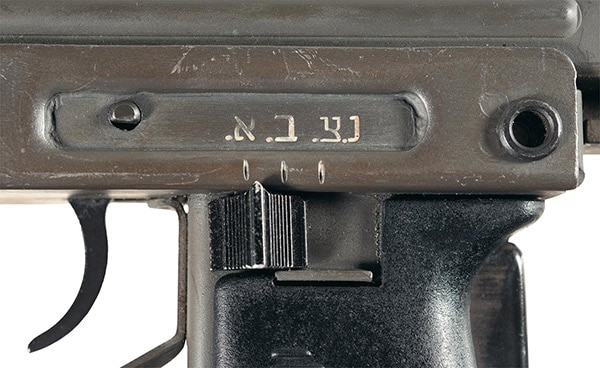 Using simple sheet metal stampings the weapon could be made cheaply.   It’s detachable wooden stock, weighed over 7-pounds, but made the gun easily controllable even when being fired at a ripping 600-rounds per minute on full-auto. Fed by either 25 or 32-shot stick mags, these could be switched out rapidly. When used by infantry, it could be fitted with a bayonet and buttstock. For times when a smaller profile was needed, the blade and wood could be left behind to give the operator a nice 17.5-inch long, room-broom.

Major Uziel Gal presented his prototype gun to the military in 1951. It reportedly came as a surprise to him when they adopted it officially as the UZI, named in his honor. 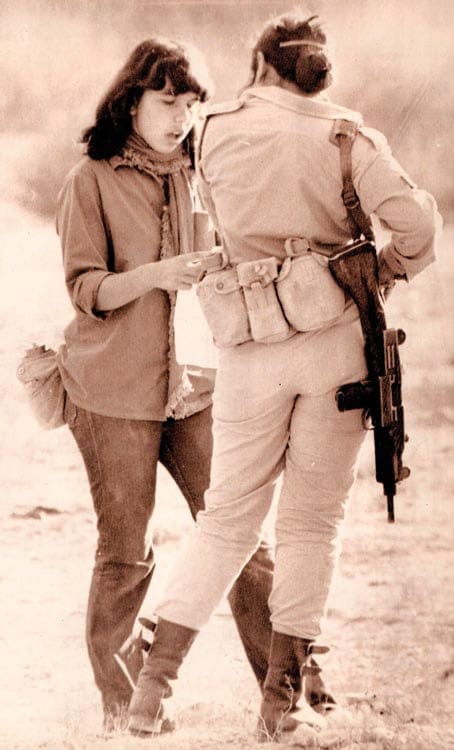 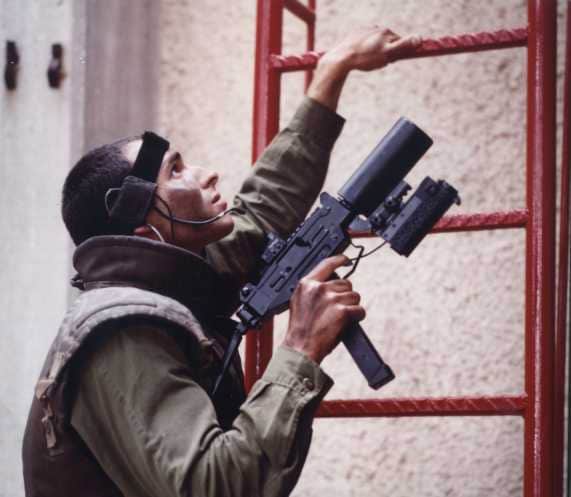 The micro uzi still sees much love as a CQB weapon.

By 1953, the Uzi was in full scale production by Israeli Military Industries (IMI) and was soon being issued not only to support personnel like drivers and supply clerks (freeing up their heavier weapons for frontline troops) but also given to special operations forces like paratroopers and commandos. The same compactness of the subgun that allowed it to be stowed in a truck or take up little room atop a desk also turned out to be ideal for people jumping out of planes and fighting room to room in Old Jerusalem.

Fitted with an optional folding stock to replace the wooden one, the Uzi soon found export customers overseas. This was a boon to the emerging Israeli government who found themselves always in need of (foreign) cash. Police and internal security forces in more than 90 countries bought the Uzi in one form or another in the past half-century. Military customers included Holland, Germany (how is that for irony), Brazil, Nigeria, and Rhodesia. 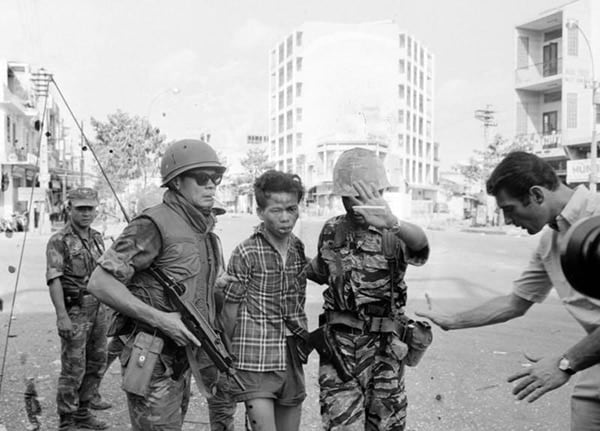 ARVN with Uzi in Vietnam during Tet Offensive, 1968. 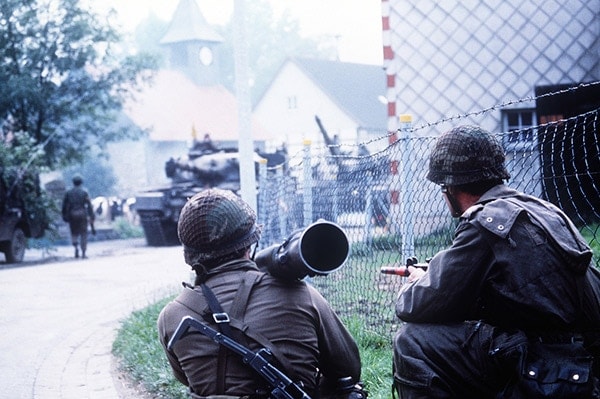 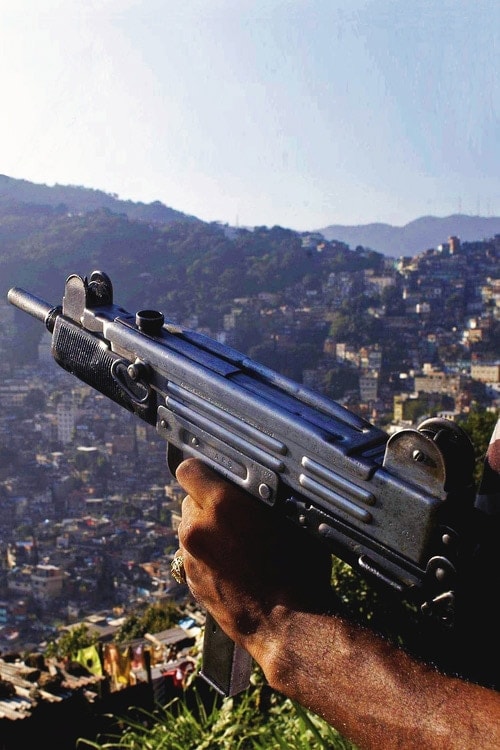 Uzi on vacation in Brazil. 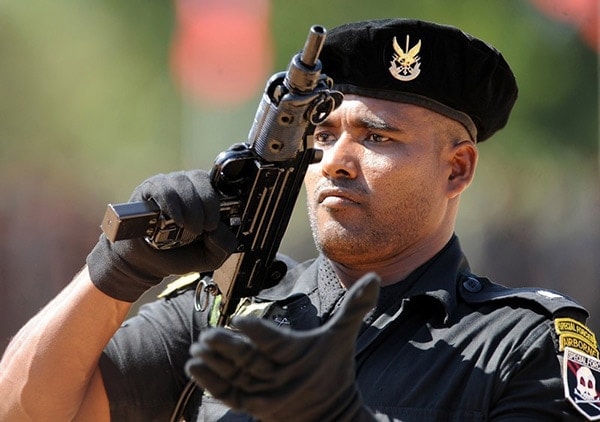 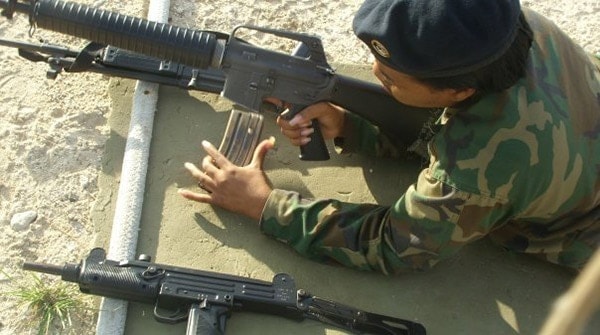 Uzi still in use with Royal Bahamas Defence Force, 2013. 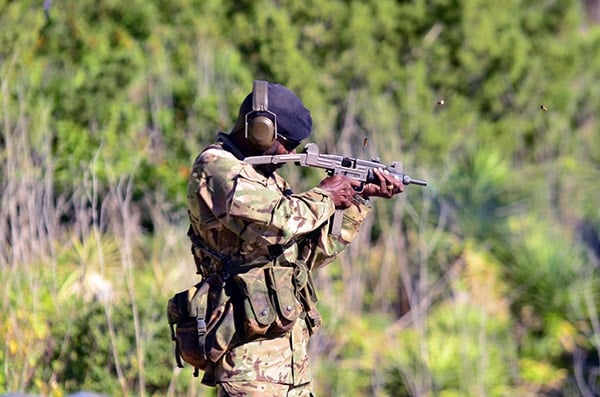 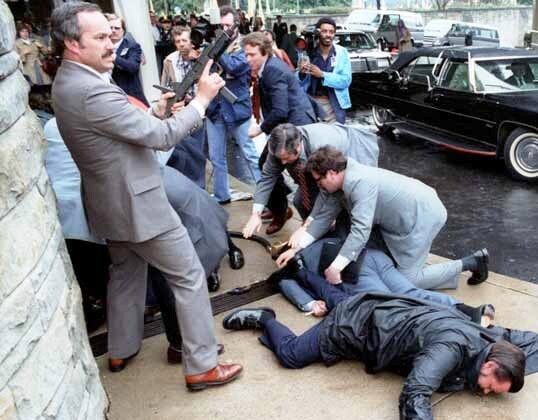 With such widespread dissemination, these guns started appearing in combat all around the world. Photojournalists have caught the Israeli subgun on the streets of Saigon during the Tet offensive, with Portuguese tank drivers in Angola, and in the hands of President Reagan’s Secret Service during the Hinckley assassination attempt.

Although its design is dated and has effectively been replaced by more capable weapons that bring both a larger caliber and a smaller profile to the table, the Uzi is still used by front line spec ops groups in many third world countries. 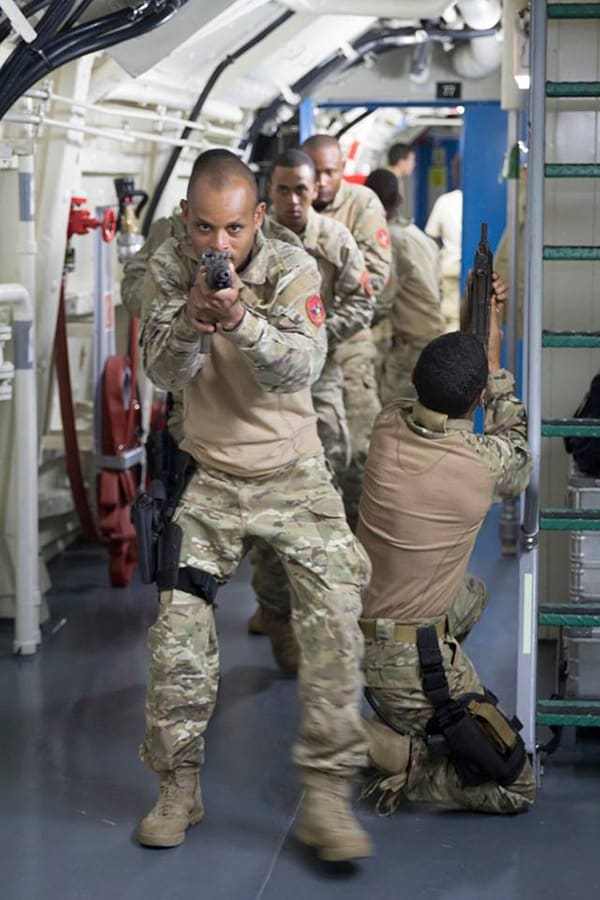 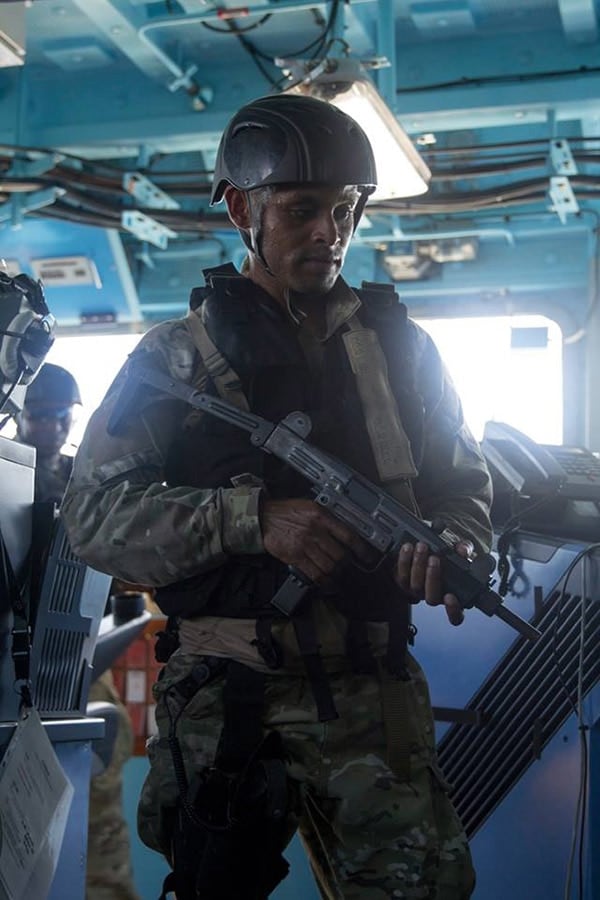 Some things just never really go out of style.

The Uzi was Tony Montana’s other little friend. 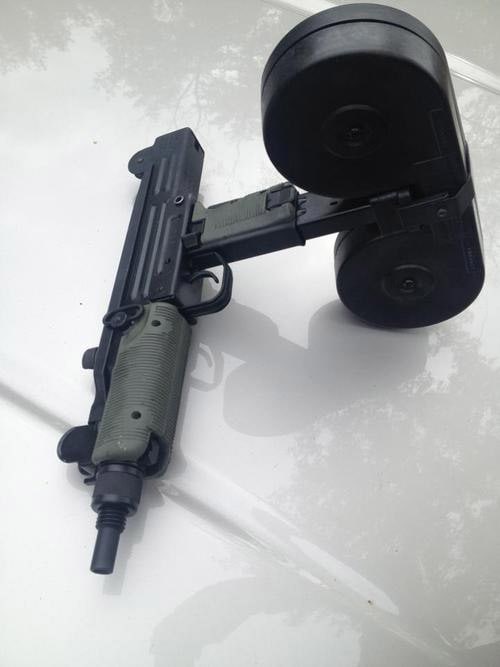 These guns have become the iconic post-WWII submachine gun, with only the H&K MP5 coming in as a close runner up and also-rans like the Beretta M12 and British Sterling having nowhere near the recognition or popularity that Uziel Gal’s humble room broom.

They were license made in Germany by Walther (as competition to HK), by FN in Belgium, and in South Africa (as the S1). In countries where copyright and trademark mean little, like Croatia and China, the unauthorized clones abound. It has appeared in film well over 100 times being wielded by action heroes as diverse as Al Pacino, Christopher Walken, and Arnold Schwarzenegger.  They even have one of the largest online fan club forums on the interwebs.  This has led to an amazing… 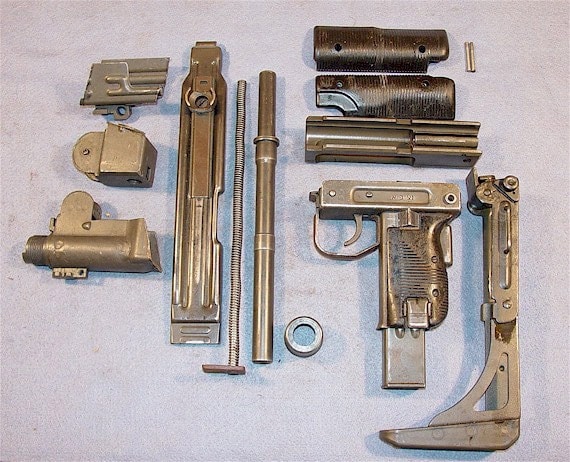 It is estimated that around 10-million of these guns of all variants have been made worldwide in the past half century and with the UZI being so sought after, North Americans are quite lucky to have huge stocks of surplus parts available in the US. These kits are some of the few that are still out there. In five seconds of browsing, we found them from such reputable places as Numrich, RTG, D&D, and Apex for well under $200.

With all NFA rules in place, you can homebuild your own semi-auto UZI with a little time and patience.

If you aren’t that good with your hands, you can buy your own ready to fire UZI. IMI made pre-ban Model A and B semi-auto guns run about $1200-$4000 depending on how nice they are. Full-tilt boogie full-auto Class III guns start at $20K and move north from there thanks to the 1986 Hughes Amendment (contact your Congressman!). About the most inexpensive route to get a shooter right out the box is a Century Arms made Centurion UC-9. These parts guns assembled on new semi-auto receivers can be found for about $800. 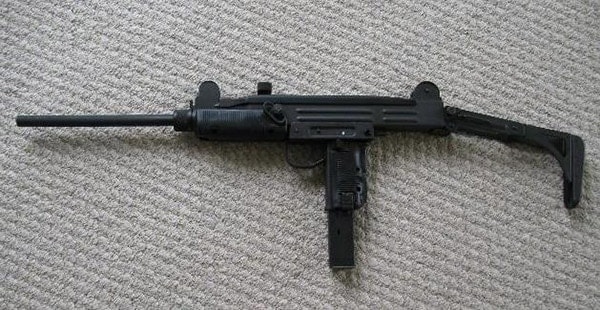 On the bright side, the original producer, IMI, is now IWI and is finally established in the United States. While they currently only have the UZIPro listed on their website, it’s not too farfetched to expect an UZI carbine in the future, after all the original gun is still in limited production in Israel. Of course, it would have to be a semi-auto only made to shoot from a closed bolt, but hey, what do you expect. SIG brought back the classic P210 handgun mainly because of the US market just last year, which proves the validity of the argument.

I bet the Kaiser never saw that coming.