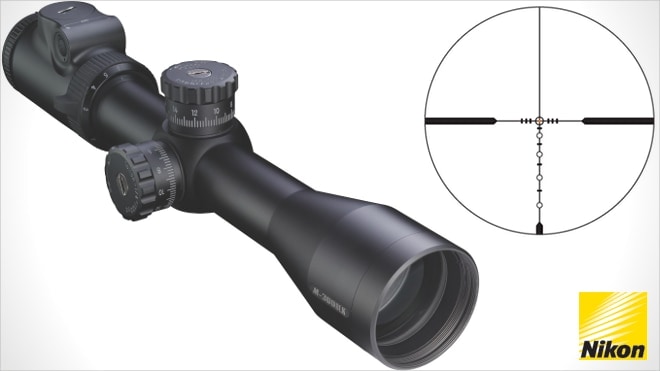 Nikon has just announced a new riflescope with a specialized reticle designed for ARs and other rifles chambered for 300 AAC Blackout, the M300 BLK 1.5-6×42. A flexible optic, the scope has a magnification range of 1.5 to 6x.

This makes the M300 BLK 1.5-6×42 useful for accurate shooting at all practical distances and with holdover marks out to 600 yards, it’s also a fast scope as far as target acquisition is concerned. The reticle is marked for both supersonic and subsonic loads for shooting suppressed.

Powered by a three-volt lithium battery, the scope has up to 32 different brightness levels for the orange center dot. When the dot is turned off, the the scope saves the last brightness setting.

The announcement follows on the heels of the introduction of the Nikon M-223 1.5-6×24 riflescope. Also for ARs and other tactical rifles the M-223 1.5-6×24 is for rifles chambered for the more common 5.56 NATO and .223 Remington cartridges.

Like the M-223 1.5-6x the M-300 1.5-6×42 scope is offered with or without an illuminated reticle. With MSRPs at $699 and $899 for the unpowered and powered versions, respectively. Real-world prices should easily be more than $100 less than their list prices, putting them firmly between entry-level optics and high-end 1.5-6x scopes which can retail for over $2,000.

There is a lower-cost option, although it’s not a 1.5-6x scope — not that too many 300 BLK shooters are working with limited funds. While the cartridge has a loyal and growing user base, it’s still more expensive to shoot than more common and established calibers.

Just the same, for people on a budget Nikon does make an M-300 BLK 2-7x scope for just $199. While these scopes serve different roles it’s still quite flexible and uses the same calibrated 600-yard reticle.

Like all Nikon scopes it can be used with their Spot-On smartphone app that will precisely calculate what the pips in the reticle are calibrated to when using specific ammunition.

For instance, if the user is shooting their own subsonic loads that shoot a little flatter than factory loads, using the Spot-On app, they can determine if the 200-yard pip is really 200 yards or if it’s actually 220.

While this is less important for up-close shooting and fast shooting, for longer-range applications it can mean several inches of point-of-impact change. 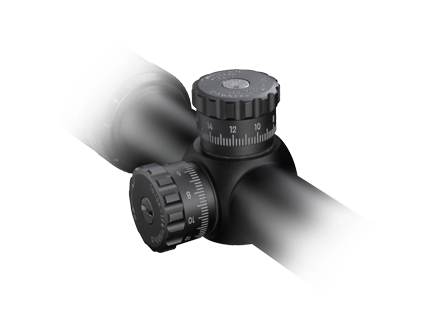 Also common to many Nikon scopes is the use of their Zero-Reset windage and elevation knobs. The Zero-Reset system allows the user to change where the zero is on the knob after getting the crosshairs dialed in. Just pull up on the turret, rotate it to where your zero is, and lock it back in place.

This allows users to know that zero means zero, not zero plus or minus a few clicks.

The scope is built around a 30mm tube and isn’t overly long at 12.2 inches in length. It has 3.7 to 3.8 inches of eye relief and weighs in at 21 ounces for the illuminated reticle and 20 ounces for the unpowered reticle.

For all the details and specifications check out the product pages for the illuminated and non-illuminated models.