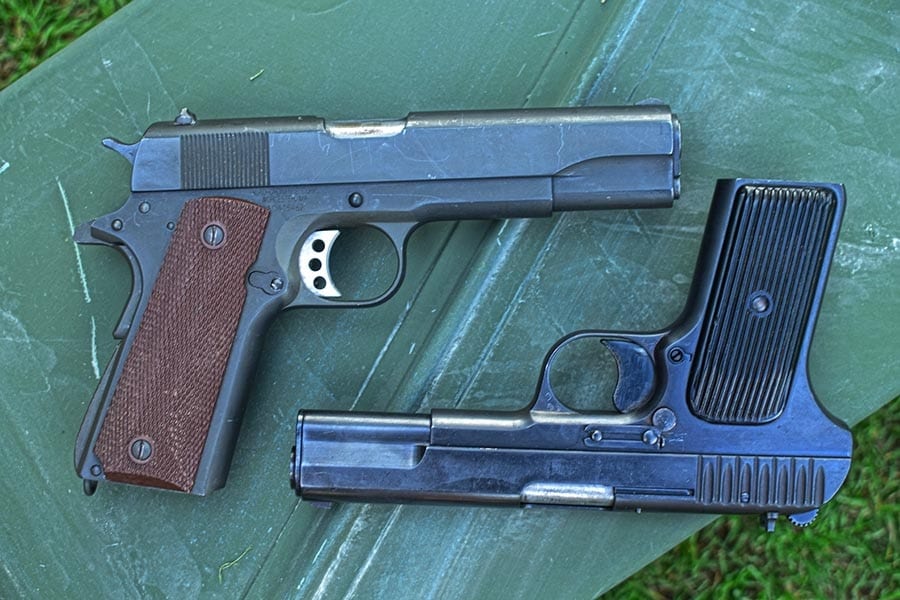 While countless articles have compared the M16 to the AK-47/AKM, few concentrated on the sidearms of the two largest superpowers of the Cold War: the United States and Soviet Union. Two very different nations with equally different combat doctrines, thankfully, never went toe to toe in open war, but what if they had? Sure, the lowly pistol would have played a small part in this conflict, but it would have played a part nonetheless. For both the sake of arugment and academia, Guns.com will compare not just the M9 to the PM, but also the TT33 to the M1911.

Many writers, myself included, have written tons of information comparing the M1911 to the M92, but they were never pitted against one another in combat, unless you count the Walther P38 (from which the M92 derives many of its features) of the Wehrmacht in WWII. This makes sense, Italy is a member of NATO and has been for longer than the M92 has been in service with the U.S. It’s interesting to note that people often compare the M9 to its predecessor, the 1911, rather than its adversarial equivalent, the Makarov PM. 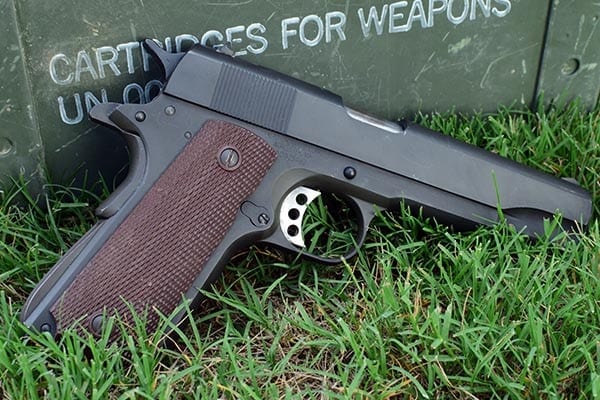 The M1911 was the brainchild of the prolific firearms inventor John Moses Browning and the United States Army adopted it as the standard sidearm in — you guessed it — 1911. It is a semi-automatic pistol chambered in .45 ACP, feeds from a seven-round box magazine and entirely built from steel, save for its grip-panels. The M1911 features a thumb and grip safety, a single-action only trigger and operates VIA locking-lug, short-recoil system.

The Soviet semi-auto pistol of WWII is the Tokarev TT-33 handgun, a semi-automatic pistol chambered in 7.62x25mm, using the same recoil and trigger system as the 1911 with clear influences from FN’s 1903 pocket pistol. It feeds from an eight-round box magazines and features a push-button magazine release, just like the M1911. The largest differences, outside of caliber, are grip angle and exclusion of a grip-safety. The TT pistol uses a steeper grip angle that is less-ergonomic than the 1911 for most shooters. 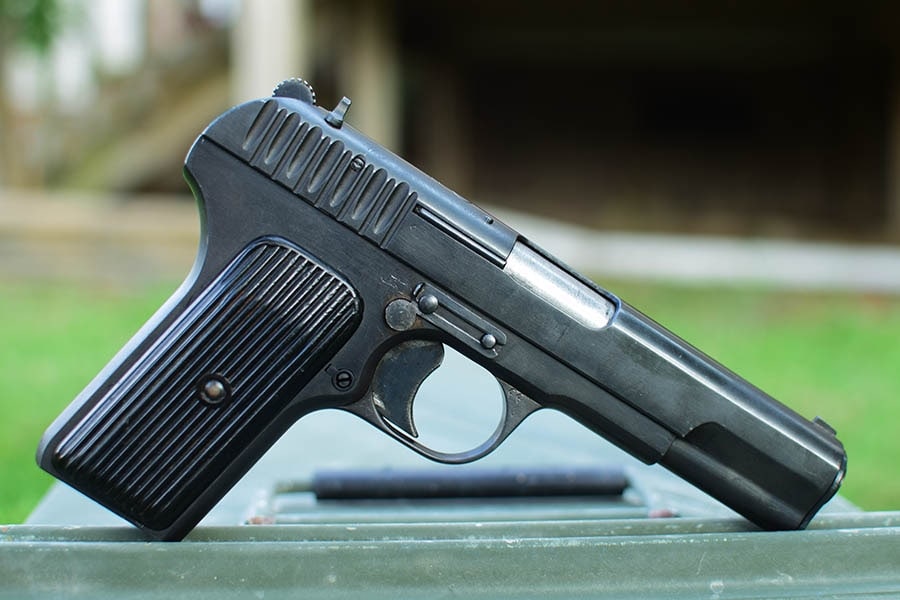 In this instance, two very different countries with different design principles arrived at very similar results. Both are accurate and easy to shoot, thanks to their single-action triggers, and both were leagues ahead of the revolvers they replaced. Which one is superior? Truthfully, in their Second World War configurations, only personal preference and ammo theory separates them. If you adhere to the slow-and-heavy-projectiles-are-king school of thought, the 1911 is superior. However, if you believe that bullet-penetration is more important than raw power, the ultra-high velocity 7.62x25mm round of the TT-33 makes it the better choice.

Realistically, choosing one or the other should also be influenced by the adversaries faced. For the Imperial Japanese forces of WWII, who rarely wore armor or anything heavier than a BDU, the .45 ACP would do a better job of stopping them. If you were a Soviet Commissar facing off against the Nazi forces on the Eastern Front, clad in thick winter clothing and leather, you would probably prefer the TT-33 for its ability to punch through this outer-clothing and reach the target’s vital organs.

What about the next generation of sidearms the two sides employed? The M9 and the Makarov PM? While both featured double-action triggers and 9mm projectiles (although the Makarov actually uses a 9.22mm projectile), they couldn’t be more different. 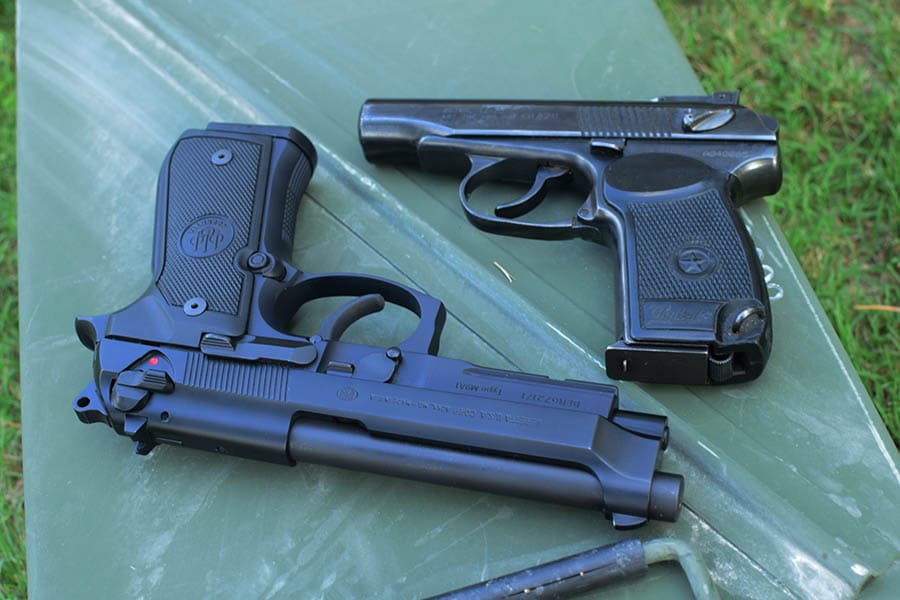 The Beretta M9A1 and the Soviet Makarov PM — both solid pistols, but one is better than the other. (Photo by Jim Grant)

The M9 is the military version of Beretta’s Model 92 semi-automatic pistol, chambered in 9x19mm.  It utilizes the same short-recoil locked breech design the Italians had employed years earlier with their M1951 pistol and feeds from a staggered, double-stack, 15-round box magazine. It can be fired in double or single-action and its external slide-mounted safety also acts as a decocker.

On the other side of the pond, the Russians employed its Makarov PM pistol after a competition to replace the TT-33 handgun. The PM is a very European design and shows its age with features that are arguably inferior to that of its predecessor, the Tokarev TT. 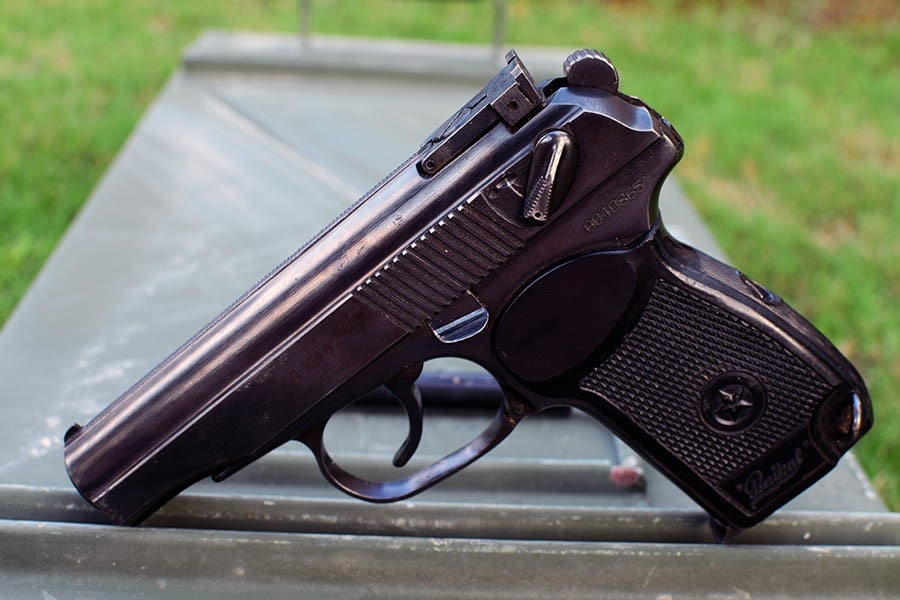 The IJ-70 is the import-friendly version of the Makarov PM. Other than roll marks, the only difference is the adjustable rear sight (Photo by Jim Grant)

For instance, the PM uses an archaic heel-mounted magazine release that requires two hands to use, unlike the much faster push-button style of both the TT-33 and the M9.

Another strange design choice is the use of a blowback recoil system. Strange because this method not only limits the power of the round used (since it relies on either recoil spring strength, slide mass or both), but also increases felt recoil. Though it does have one advantage: accuracy. Blowback firearms have fixed barrels, which means less forces act upon the bullet before it leaves the barrel, making its flight more consistent.

Additionally, the PM feeds from an eight-round single-stack magazine in the most powerful cartridge a blowback firearm can reasonably handle, the 9x18mm Makarov round. Yes, I’m aware that Hi-Points are blowback, but notice the word: reasonably. The tremendous weight and recoil of the Hi-Point are testaments as to why a blowback configuration with a full power 9mm pistol cartridge is a bad idea. 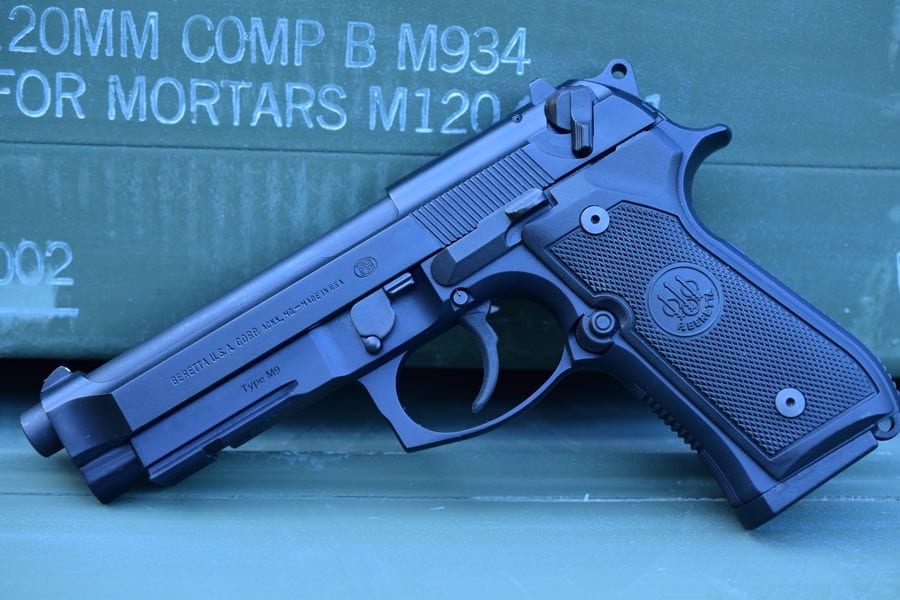 M9a1, civilian variant of the M9 (Photo by Jim Grant)

Does this slim, single-stack blowback pistol sound familiar? It should, because it’s a Russian clone of the Walther PP series of handguns. Admittedly, great concealed carry pieces, but not the best combat handguns. After all, if you didn’t have to conceal your carry piece, would you take a .32 ACP Kel Tec or a 10mm Glock 20?

Unlike the TT33 and the M1911, the M9 is superior to the PM in every conceivable way as a combat handgun. The M9 holds more rounds, 15 rounds of the more powerful 9x19mm as opposed to eight of the Makarov’s 9x18mm cartridge and has less recoil. The M9 also has a longer barrel, for better ballistic performance, and a longer sight-radius, for more accurate shooting.

There can be only one

Many people debate the M9’s superiority to the M1911, but only the most dedicated Soviet arms fanatic could say the M9 isn’t better than the PM, a German mouse-gun knock-off never designed for open combat. The PM was more likely employed as a sign of rank and to shoot deserters and political dissidents, than to fight NATO soldiers.

While the winner between the M1911 and the Tokarev TT-33 may be too close to call, the M9 is by far a superior choice to the Makarov PM pistol, especially in combat.