As a crowd gathered outside Chuck’s Gun Shop in Riverdale, Illinois, on Saturday to bring national attention to the store’s history of selling guns linked to crimes in Chicago, Chuck’s remained open. You couldn’t tell it was open just by looking at it — the shop’s gate was mostly closed and two men guarded the front door, only allowing individuals with Firearm Owner Identification cards through.

At the edge of the block, half the crowd gathered in support of the Brady Campaign to Prevent Gun Violence’s new initiative targeting retailers that sell guns to straw purchasers or gun traffickers. Many in the group said they were either victims of gun violence or had family members who were. They wore red shirts with Brady’s new slogan, “Stop Bad Apple Gun Dealers,” written across the chest and they chanted “Save our children,” “Reform Chuck’s now,” and “Stop bad apples!”

The other half stood in front of Chuck’s and defended it. They wore dark shirts and hats supporting the National Rifle Association, “IGOLD,” which stands for Illinois Gun Owners Lobby Day, or Illinois State Rifle Association. They reacted to the speeches delivered by the Brady supporters with “Raise your children!” and “Why are you here?” Individuals would occasionally yell, “Go home,” “Armed blacks don’t get oppressed,” and “Guns protect our kids.”

Both sides expressed satisfaction over the turnout, and individuals within the groups questioned the validity of the opposition’s membership.

Chuck’s was selected, and has been the site of other protests in the past, because 19.49 percent of all crime guns found in Chicago between 2008 and 2012 can be traced back to it, according to a study by the University of Chicago Crime Lab. That statistic, and others like it, makes Chuck’s one of the “worst offenders,” said Dan Gross, president of the Brady Campaign.

However, Chuck’s has not been convicted of any formal charges and Brady is not planning on filing suit against it — a major part of Brady’s national campaign against “bad apple” dealers. 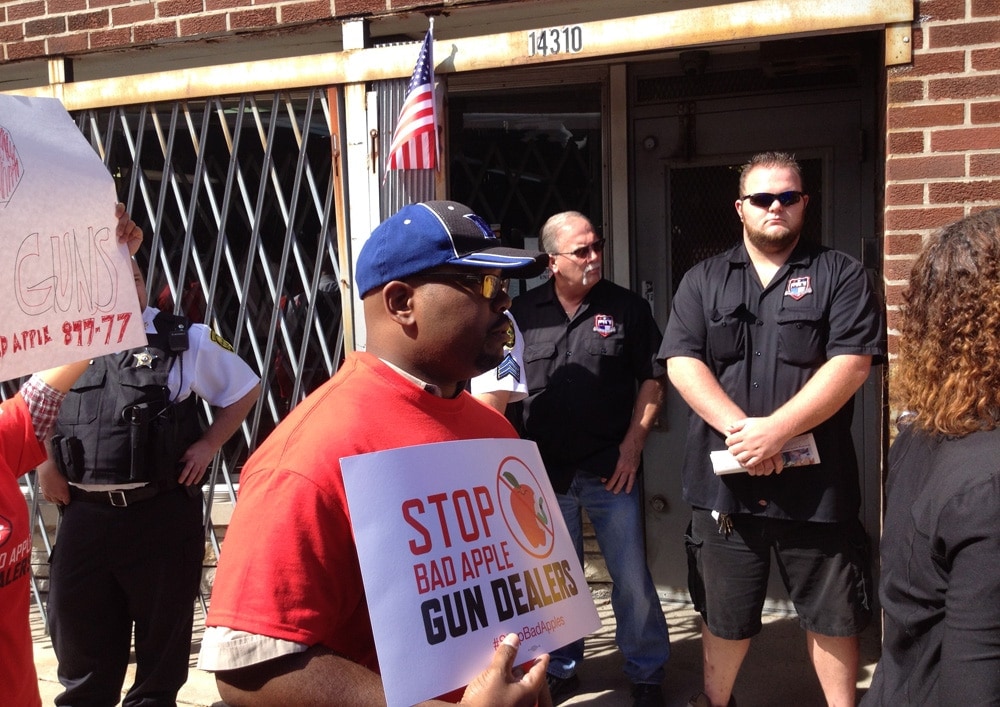 Guards wouldn’t let anyone into Chuck’s unless he or she had a Firearm Owner ID card during the Brady protest Saturday, Sept. 6. (Photo: Daniel Terrill/Guns.com)

In response, the manager of Chuck’s Gun Shop, John Riggio, said the study’s conclusion is an unfair reading of the data.

“Liars can figure and figures can lie, so you can skew a lot of statistics,” he said in an exclusive interview with Guns.com.

Riggio explained that a gun’s history is documented by the manufacturer, distributor, and finally retailer to consumer. If it winds up at a crime scene, it’s called a crime gun and since the paper trail officially ends with the transaction between retailer and consumer, that’s the last documented location of the gun.

“Naturally, once a firearm is out my door or anybody’s door, you can’t really follow them home and see what they do,” Riggio said.

“If you sell and you’re a fairly successful business, you’ve been around a number of years, you sold lots of firearms. Unfortunately, a certain percentage of people don’t store their firearms the proper way or they live in an area where there’s a lot of break-ins,” Riggio said. “To really explain it to the general media and anybody, you really have to go to the ATF’s website and look at traces and how they’re all done and then look at the demographics of the number of years that person has been in business and how many hundreds or thousands of guns they’ve sold and then you look at the percentages. None of these are evident in these studies that they’re talking about and you can do whatever you want with figures. Is there any allegation that we did something wrong at the counter? Absolutely not. Or any of our customers did? No.”

Riggio also argued it isn’t an issue of straw purchasers or gun traffickers buying guns at Chuck’s, mainly because Illinois has a “redundant system” for buying a gun. In the state, potential gun buyers must first obtain a Firearm Owner Identification card that requires a background check and about six weeks to process, and then undergo another background before completing a transaction with a licensed gun dealer.

“You can’t even touch a gun or a box of shells or a bullet unless you have (a FOID) first,” Riggio said. “At the minimum the person who purchases a gun from us has two background checks. That’s how the system works. Once a firearm goes out the door … it’s up to the consumer. We hope everybody does the right thing and stores it the right way. Does everybody actually do that? Of course not. Everybody is different.”

When asked if Chuck’s had specific guidelines, such as those listed by the National Shooting Sports Foundation, the gun industry’s lobbyist group, he said he trains his employees personally.

“We would never sell — a straw purchaser is when you know the firearm is for somebody else. We train the heck out of our employees to watch that. So you would never know if someone was buying a firearm for someone else unless they told you or they were next to them pointing the gun out,” Riggio said.

“My rule is if you’re not sure, you don’t do it,” he added. “You listen to your gut, and your gut is always right — always.”