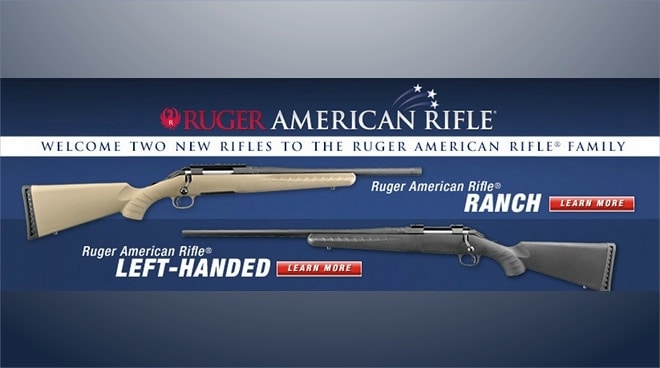 Ruger is adding two pages to the American Rifle story with its new Ranch and finally left-handed models to the popular American line-up. These bolt-action rifles are going to make a lot of people happy.

The Ranch Rifle, deceptively named, is the most tactical American series yet. The Ranch family is made of four carbines chambered for 5.56 NATO or 300 BLK with compact 16-inch threaded barrels and a light flat dark earth synthetic stock.

The steel parts have a deep matte black finish for a two-tone look. Depending on the chambering they have 1/2-28 or 5/8-24 threads for muzzle devices including flash hiders, compensators, brakes or direct-mount suppressors.

Each rifle will be offered with either a standard stock or a compact stock. Shorter stocks are nice for shorter shooters as well as anyone who expects to shoot while carrying a pack or training with a plate carrier and the like. The stocks offer shooters 13.75- or 12.5-inch lengths of pull.

Like most American rifles, the Ranch models don’t have iron sights, instead they are fit with a railed receiver for use with optics. Unlike standard Americans these carbines have full-length rails for scopes or red dot sights.

They do share many of the same features with models that have preceded them including the bedding, adjustable and crisp trigger and all-around ruggedness that makes the American rifle so popular. Both the 5.56 and 300 feed from rotary five-round magazines.

They have another thing in common with other Americans and that’s the sticker. As with the rest they have sub-$500 price tags with MSRPs of $489 across the board. These rifles are commonly found for much less in stores.

The American Left-Handed rifles are mirrored versions of the first line of American rifles bringing these affordable and durable rifles to that last ten percent of shooters.

With left-handed models of the Ruger American in production that opens the door for future variants, including the American Compact, All-Weather, Redfield, Predator, Rimfire and of course, Ranch rifles also made in a lefty configuration.

These rifles are priced exactly the same as the American Standard rifles with MSRPs of just $449 and we expect them to be on shelves for the same price, too, well under $400.

If you’re looking for an inexpensive, simple, modern and tough bolt-action rifle for work in the field that’s light and won’t break the bank head over to the new American Ranch and Left-Handed product pages for more details and specifications.