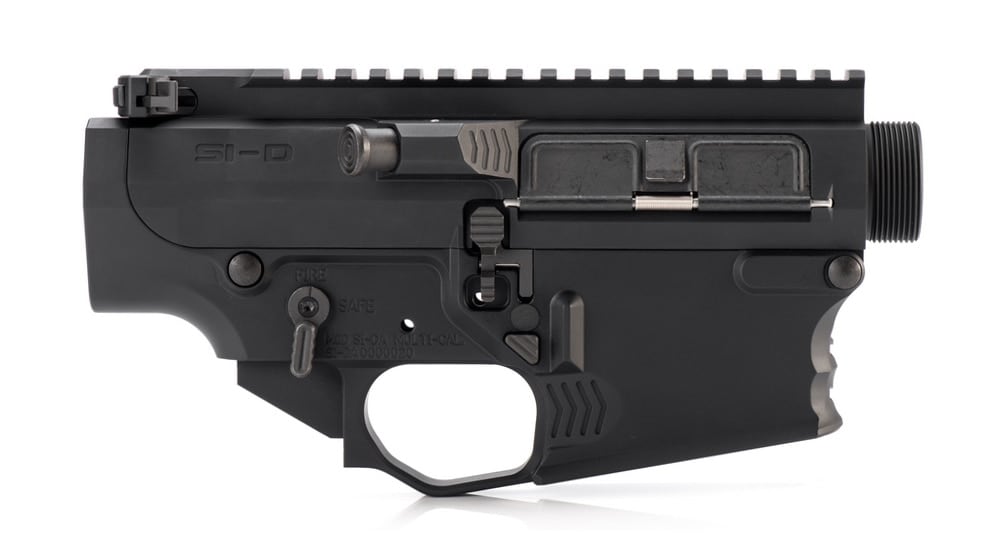 The SI-D308 receiver set has mirrored controls on both sides. (Photo: SI Defense)

SI Defense is taking pre-orders for its upcoming fully-ambidextrous receiver sets for AR-style .308 rifles and has released photos and details of an upcoming carbine built using them.

A original design, the SI-D308 receiver set has completely-mirrored controls on both sides, even the bolt catch lever. This means the same manual of arms can be used for lefties and righties, and it makes shooting it off-handed that much more natural.

The company has taken the ambidexterity to a new level with these receivers, to the point where even the take-down pins can be reversed for left-handed use. Naturally the safety selector is marked on both sides.

But the features don’t stop there. SI Defense has thrown in a handful of tweaks and improvements unlike on any other AR-10-style rifle.

The front of the magwell is contoured for use as a grip and the sides of the receiver are indexed to remind users to keep their finger out of the magwell when the trigger’s not in use.

While the ejection port is not reversible, the shell deflector is placed far forward and aggressively angled to ensure shells don’t ever fly towards left-handed shooters. The forward assist is threaded, not pinned, to make it easy for users to install the forward assist of their choice without needing a vice and punches.

Knowing that users will want to build these to fit many different needs they aren’t completely assembled. Although they’re shown with a forward assist and a Battle Arms Development safety selector, these are not included with the receiver set.

Users will have to supply their own fire control group, safety selector, forward assist and the rest of the parts needed for any sort of AR build including a buffer assembly. For anyone with experience completing a receiver set this shouldn’t be too difficult.

As is standard for high-quality rifles the receivers are 7075-T6 alloy aluminum with a hard-anodized finish. They’re machined billet receivers, which is common for parts with a lot of custom features.

SI Defense goes out of its way to ensure that the uppers perform where it counts most, accuracy. The bore is cut concentrically and reamed for superior barrel alignment.

For people uninterested in assembling a firearm of their own there will be a complete rifle, the SI-D308 AMBI.

The SI-D308 AMBI will be a very cool gun, guaranteed to make strangers walk up to you and say hello at the range.

SI Defense has selected some of the best components on the market to build their SI-D308 AMBI rifle starting with a Proof Research stainless steel 18-inch match barrel with a nitride finish. Carbon fiber barrels, which are lighter, stronger, cooler and even more accurate, will also be available on request.

Taking advantage of the barrel’s accuracy the rifle uses a CMC Flat Trigger and will be issued with an ambidextrous BAD-ASS safety selector.

The company is taking pre-orders for their receiver sets now for $619. They are also taking pre-orders for complete rifles though the price is not listed yet. We spoke with SI Defense and while the price hasn’t been finalized they expect it to be near $3,000 with the composite barrel and probably several hundred less for a steel barrel. They also have plans to unveil an even harder-hitting model chambered for .300 Winchester Magnum SHOT Show 2015.

It look phenomenal, and it’s hard not to want one, even if you don’t really have a need for a semi-auto .308. It’s that good.

We hope SI Defense has an AR-15 model in the works. We’ll let you know what we found out.