3 common shooting mistakes and how to avoid them (VIDEO)

When shooting any firearm, there are techniques that are easy for all of us to get wrong.  If we’re aware of them, we can correct them and improve our ability to shoot.  If not, well… what’s the point?  Here are three mistakes I see all the time down at the range: 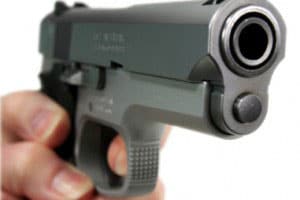 Example of not enough finger on the trigger. (Photo)

I often notice shooters having trouble placing their trigger finger in the right place.  Sometimes the gun is too big or too small for them, but, whatever the case, shooters need to strive for the same trigger finger placement every time they shoot with every gun they shoot.  Consistency is key to accurate shooting and you can improve this by really concentrating on what your trigger finger doing every time you shoot.

Consistency is equally important when it comes to keeping your finger off the trigger until you are ready to shoot, though for different reasons.  Using the proper index position is best–keeping your trigger finger straight and alongside the frame–and gun-owners should turn this simple technique into a strong habit for several reasons:

1) Safety–keeping the finger off the trigger is designed to keep you and those around you safe from negligent discharges.  When your finger is bent, you are more prone to a sympathetic fire (when gripping or fighting with your non-shooting hand) and other involuntary squeezing (due to stress), both of which can cause an ND.

2) Drawing–Some holsters, like the Blackhawk Serpa holster, requires a proper index position to draw the pistol from the holster.  Even if you never use this type of holster though, many instructors advise drawing your weapon using the proper index position anyway, once again for safety’s sake. 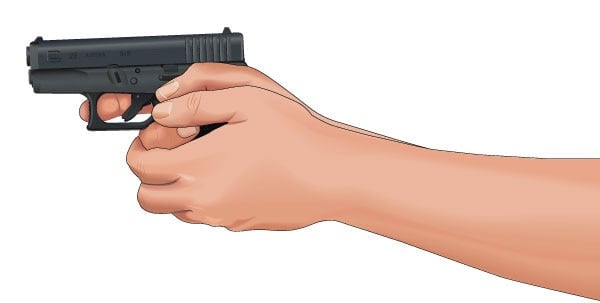 Example of improper index position. Note how the trigger finger is slightly bent in towards the trigger and almost totally visible through the trigger guard. (Photo)

3) Respect–Most gun ranges have some iteration of “keep your finger off the trigger until you are ready to shoot” posted somewhere and range officers, employees and other patrons are expected to follow and enforce this rule whenever present at the facility.  When shooting with other people, the proper index position will allow these folks to clearly see that your finger is actually all the way off the trigger.  The technique can put minds at ease and also projects to your fellow gun owners that you know how to safely handle firearms. 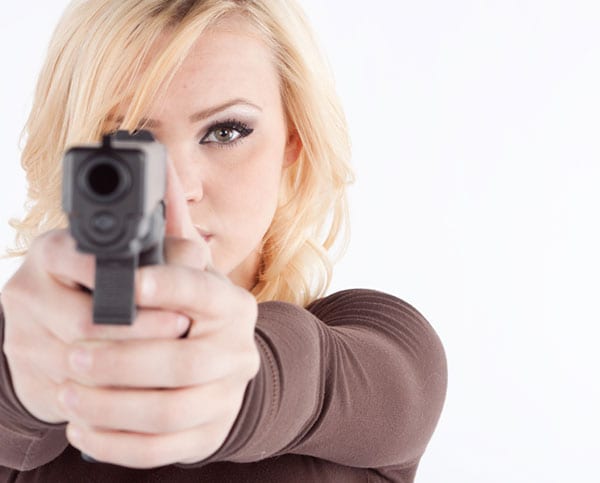 A cute model who doesn’t know how to hold a gun correctly (how many mistakes can you spot?) (Photo)

But there’s more.  Sometimes new shooters instincts when it comes to finger placement is a little baffling to me.  I’ve seen a couple new shooters over the years straighten their non-shooting index trigger–in other words, they have both index fingers pointing straight forward.  Besides looking funny, all that that does is give up more support for the grip hand.

I’ve also occasionally seen people put both index fingers on the trigger.  Of course, this is not the proper technique, but I understand the reasoning behind this one a little better. I’ve witnessed shooters struggle with the Sig DAK, in the past, and I’ve known a couple of shooters you couldn’t pull heavy triggers because of injury or grip strength.  They had to use both fingers to fire the gun, though with the number of variously sized firearms on the market that they could feasibly fire correctly, this is not the ideal solution for shooting your defense weapon. 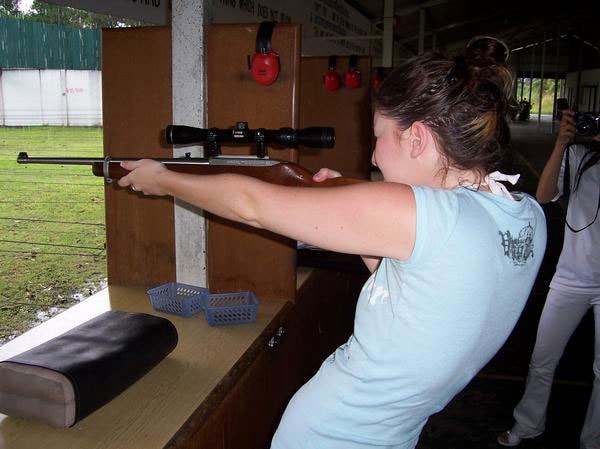 It may seem like the ladies catch the most flak for not “leaning in” enough when assuming a shooting stance, but in reality this common mistake is made frequently, and sometimes hilariously, by both genders. (Photo)

Many shooters lean back too far or stand totally erect when shooting.  Just watch a few YouTube videos of guys filming their girlfriends shooting for the first time and you’ll see what I mean. (Many guys lean back too, as we see in the video above, and do not teach any number of proper handling techniques beforehand, as we see in the video above).  It’s as if holding a pistol or rifle out in front of us makes us want to counterbalance and lean back at the waistline, but that doesn’t work and it isn’t a good technique.

When it comes to your stance, having an aggressive, forward-leaning tilt is essential for good balance and control.  Leaning forward helps with recoil management, too, thus allowing quicker follow-up shots.

Don’t fatigue your legs (forget the old FBI crouch or “duck-walk“).  It is possible to crouch too much.  Lean forward at the waist and try to use bone, not muscle, to support your stance; they’re stronger and they don’t get tired.

The whole “bone is stronger than muscle” principle applies to a lot of shooting techniques.  For example, while there are certain times when having the elbows out when aiming your gun can prove beneficial, they are very rare and usually, a shooter will just slowly exhaust their shoulder muscles if they hold their elbows out to the side while leveling.  Elbows should be tucked in and straight down or even a little inward, towards the stomach.  Not only does this relax the shoulder muscles, which can keep you from shaking, it also provides a stronger platform for holding up the weapon. 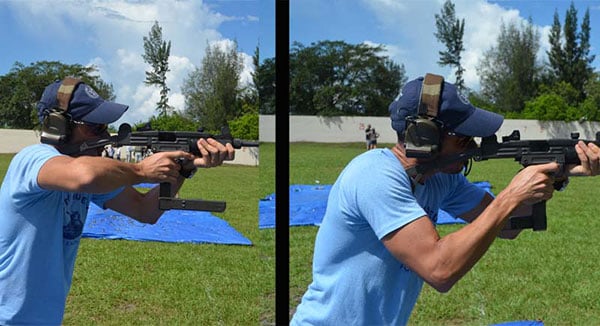 Chicken winging may seem natural to a lot of shooters, but this usually improper technique tires muscles and can lead to shaking. (Photo)

Moreover, in a gun fight, we want to make our profile as small and tight as possible.  Keeping our bent elbows out to the side like chicken wings could get them shot.   So, keep your elbows down.