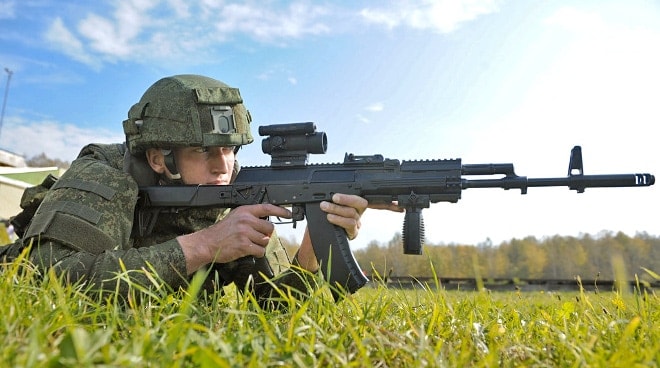 Russian soldier with an AK-12. (Photo: Russian Ministry of Defense)

The Russian Ministry of Defense will be upgrading its military rifles to new standards as a part of the Future Soldier program.

The news is half expected and half surprise as the ministry will be issuing two different rifles to troops, the AK-12 and the AEK-971. The AK-12 has been in development for years specifically to meet the needs of a 21st-century Russian military and has, since its first announcement, been expected to replace older AK-pattern rifles currently in service.

What’s surprising is that the AEK-971 has simultaneously been selected for service. According to Russia Today, the decision of which rifle to field will be made individually by department.

The decision to field not one but two new rifles on a large scale was also somewhat unexpected. Previously the program intended to roll out the chosen rifle to select units because of the sheer number of AK-pattern rifles already in service.

AK rifles have a fantastic track record for longevity and from a cost perspective, it didn’t make sense to replace relatively new rifles in good condition. However, following sanctions against Russian small arms conglomerate the Kalashnikov Concern, it seems that the Ministry of Defense is looking to stoke some fires at home to make up for business lost abroad.

The AK-12 is a completely modern overhaul of engineer Mikhail Kalashnikov’s archetype employed by Russian forces for over 50 years, and while it maintains the same operating principals it ultimately represents a new generation of small arms design.

And while it, too, has been updated for the Russian military’s needs, the AEK-971 is an older, altogether different type of rifle.

The AEK-971 has two op rods joined by a cam inside the recoil assembly. When it fires the op rods travel in opposite directions, with one cycling the action and the other pushing a counterweight exerting a negative impulse that balances the rifle.

In effect, the AEK-971 recoils in both directions offering soft, level automatic fire. This makes the rifle very controllable in burst- and fully-automatic fire. While it maintains the Kalashnikov aesthetic, it has little in common with the tried and true Kalashnikov design.

Similarly, even though the AK-12 is similar to existing AK rifles, about the only thing that’s interchangeable between true Kalashnikov rifles and the new design are the magazines.

Changes made with AK-12 add up to more than just a few rails and tactical flair. The rifle has a different fire control group, new trunnions, separate thumb-actuated safety and selector levers and even a new bolt carrier group design (that, like the original, features a long-stroke gas piston system).

The decision to field both designs is interesting as they offer significant overlap in terms of function. However we suspect that cost is part of the decision. While both rifles eventually — after several revisions — passed all the Defense Ministry’s trials, it’s likely that the AK-12 is a less expensive rifle better suited for wide-scale service, while the more complex AEK-971 lends itself to more select units.

As fans of these designs we’d love to see commercial variants developed for export, although it may be some time before anything like that happens. Earlier this month Russian Foreign Minister Sergei Lavrov declared NATO as one of Russia’s and Ukraine’s greatest threats to stability.