6 ways NOT to grip a pistol

I’ve seen some pretty messed up grips in my day.  From movie stars to bone heads, to good people who are just naïve or inexperienced, I feel like when it comes to gripping a handgun, I’ve also become a reluctant expert in what not to do.

There are many effective pistol grip styles, however gripping a pistol in the manners described below are sure fire ways to 1) lose your grip, 2) not be able to control the recoil well, and 3) not be able to put a lot of rounds down range (or into a threat) quickly.

In this article, I’m not going to explain why you should or should not shoot a handgun this way—why it doesn’t work.  I’m not going to dive into the mechanics of each because that would take to long, so just trust me (or don’t) that these grips are jacked.

Folks, do NOT try this at home…or on the range, or anywhere else for that matter:

Holding the gun too low 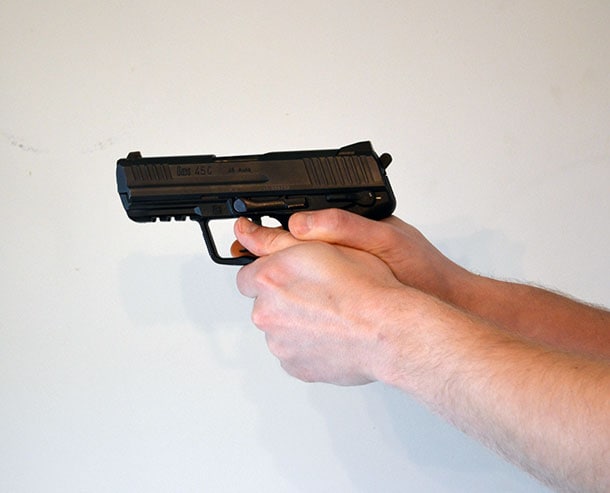 Holding the gun too low is a common mistake new shooters make when gripping a handgun.

I can’t speak for everyone, but if you asked me to, I’d say that when it comes to pistol grips, the most common and irritating mistake veteran handgunners observe are shooters (and I use that word loosely) who grip the pistol too low.

I’ll use a baseball truism here: when in doubt, choke up!  Get your grip as closely aligned with the barrel as possible, though still making sure, of course, that you avoid getting tagged by the moving slide if you are shooting a semi-automatic handgun (more on that to come).  Choke up as high as you can on revolvers as well.

This is one I really hope the “operators” out in Hollywood read and take to heart: please change your low gripping pistol ways so I can stop rolling my eyes and annoying my wife during TV time. 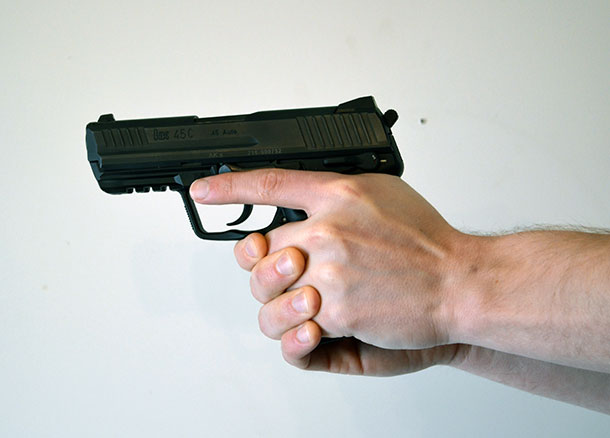 It’s supposed to be the other way around, with the strong hand touching the pistol. Otherwise, it’s off balance so to speak, and being off balance in any physical activity just doesn’t make sense.

Grab the gun, get a good grip with your dominant hand, and then wrap the support hand (which should be doing a lot of work as well supporting the grip) around the strong hand.

Seems simple, doesn’t it?  Well, apparently not for everybody. 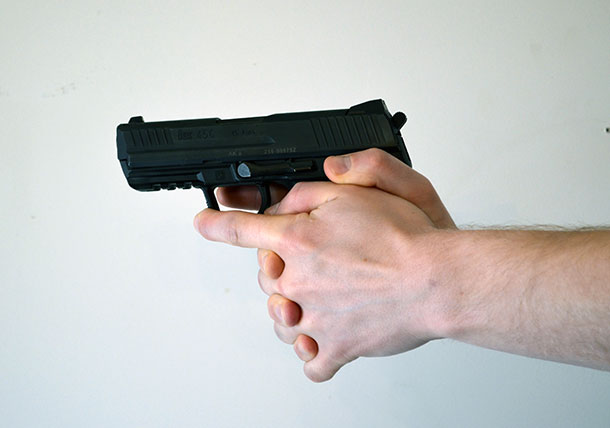 This grip is for the truly un-gifted—those who lack even the most basic eye-hand coordination.  You’d think people who’ve never shot a gun before would do this, and perhaps that’s the case; but I’ve also watched shooters who mess up after transitioning from a right handed, two-hand grip to a left handed, two-hand grip resort to this wonky hold out of… well.. I don’t know why.

Now, you may be asking yourself, who would do that drill and why?  My answer to that is that’s a whole other article.

Pointing the index finger on the support hand 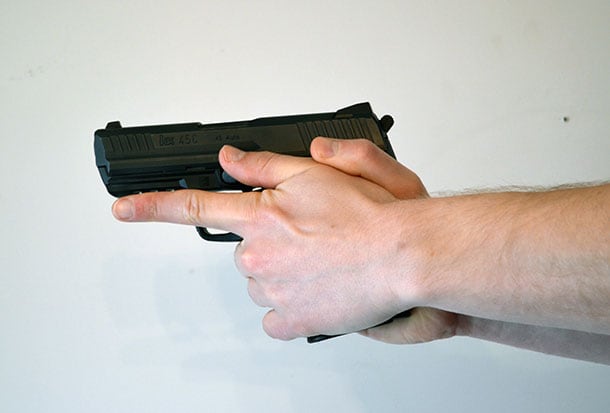 For some reason, even after they’ve blasted caps for half a day, there are always a few shooters who have a brain dump after lunch.  They come back to the firing line, grab their gun and can’t seem to get the gun to work unless they’re pointing their support hand index finger towards the target.

Huh?  I guess, subconsciously, their fingers just don’t seem to take the hint. What in the world are they thinking?  Well, they aren’t.  It just happens.  And, it’s wrong.

Crossing the support hand thumb behind the slide of a pistol 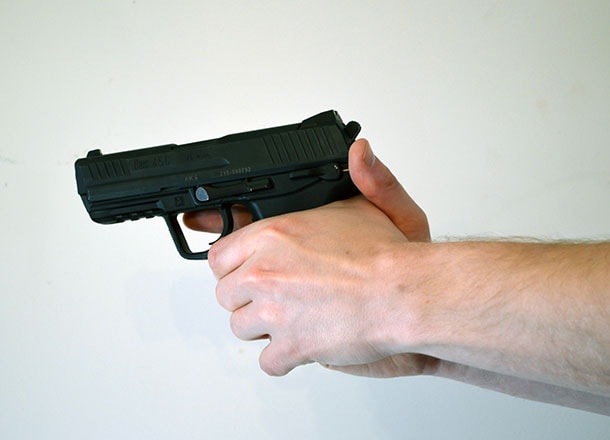 This “technique” is likely only performed until the shooter gets bit by the slide.  Sometimes it leaves two little bloody groves on the web of the support hand, near the thumb.  You may have heard it called a “snake bite.”

Admittedly, it happened to me once.  I was ten years old, the first time I ever shot a gun.  I learned my lesson quick enough, through blood (and not very good instruction). 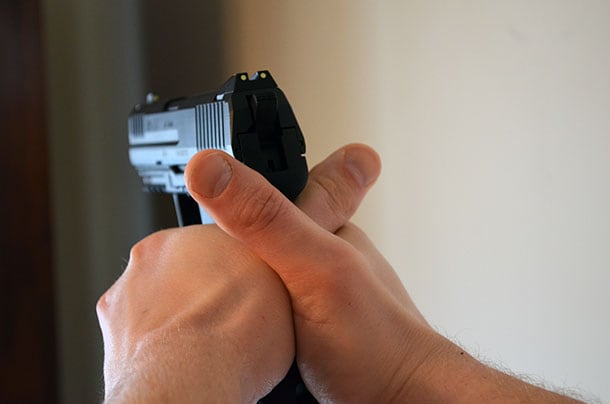 Crossed thumbs grip can result in injury from the slide.

I actually know of an incident where a shooter received seven stitches after using this improper grip.  Shocked me…but maybe he deserved it.  Besides, I’ll bet he never did that again.

Unfortunately, some people position their thumb really low back by their strong hand’s wrist so the slide doesn’t cut them.  I say it’s unfortunate, because at least if they received this aversive stimulus, they’d likely learn to put their thumbs forward.

Support hand index finger in front of the trigger guard 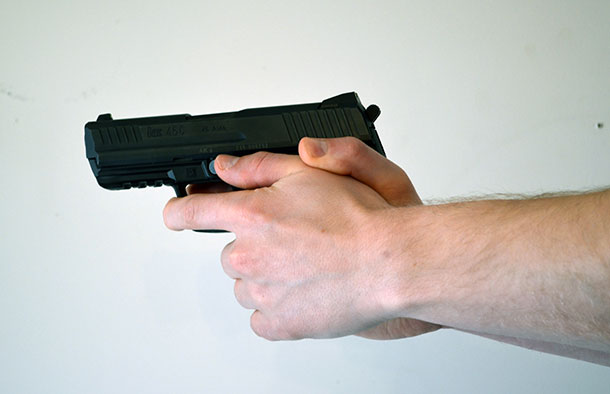 Glocks, Beretta 92F and Sig Sauer pistols, and perhaps some other models have a flat, vertical shape on the barrel side on the trigger guard.  Shooters who place their support hand trigger finger on that part of the trigger guard are doing themselves a huge disservice.

Years ago a West Point cadet who was on their pistol shooting team was shooting next to me during a tactical training course.  I was an NCO at the time, serving on a full time tactical team, and I had even won a few tactical shooting awards.  Anyway, he didn’t like my suggestion to move his finger even though I made a pretty good argument why his grip was less than ideal.

In short, that grip may work for target shooting, but not tactical shooting and it doesn’t work with all guns.