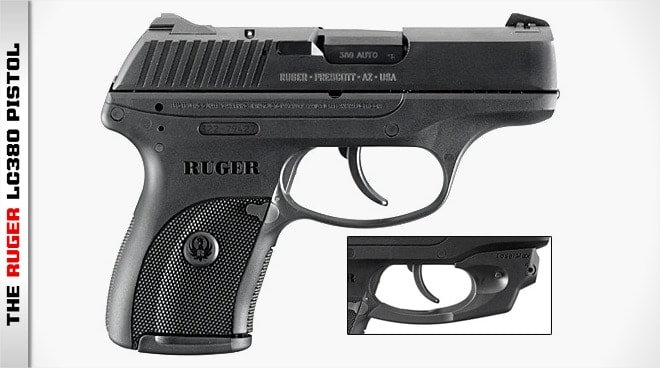 For a limited time only, the LC380 will be offered with a free LaserMax CenterFire laser sight. Later this year, a 9mm conversion kit will also hit stores. (Photo: Ruger)

Ruger is bringing back a version of their LC380 pistol that has previously been green-lit for sale in California. While Ruger has been clear on their position when it comes to microstamping and its use to restrict gun sales, they’re also not going to outright gun owners in California altogether.

As regulators in California continue to pare down the list of guns available for sale in-state, Ruger is dusting off a LC380 model from 2013 that’s still on the state’s approved handgun roster. To celebrate the return of this model Ruger is throwing in a free LaserMax CenterFire frame-mounted laser sight with each pistol. The MSRP on the pistol is $499, exactly the same as the standard model, which generally lists around $400 or less.

To further sweeten the pot, Ruger will also offer a 9mm conversion kit for the LC380 later this year, giving LC380 owners everywhere the option of stepping up to 9mm Luger. Originally introduced in 2013 the LC380 is a .380 ACP version of Ruger’s popular LC9 in 9mm.

The LC9 was launched a couple of years earlier, capitalizing on the new wave of polymer-framed, single-stack pistols for concealed-carry. While the design is light and efficient, in 9mm it can also pack a punch on the shooter’s side of things. Re-chambered for .380, the design found its home with shooters looking for something in the same size package but with less recoil.

Even as self-defense loads for .380 are refined and improved, and as .380 is gains acceptance as a viable cartridge for personal protection, there’s no doubting the supremacy of 9mm on the self-defense and concealed-carry markets today. This conversion kit lets recoil-sensitive shooters start with the lower-powered round, whether its for training or protection, and eventually work up the technique and willpower to control the same small pistol in 9mm.

The re-released model is being called the LC380CA to note its California-approved status and includes the safeties required per state law, including the magazine cutoff and loaded chamber indicator in addition to the manual thumb safety and firing pin safety, but it’s otherwise pretty much identical to the LC380 as it was introduced.

The LC380CA is thin at .9 inches wide, equipped with a 3.1-inch barrel with a standard capacity of 7+1 rounds. The laser sight adds less than half an ounce with the whole gun weighing just under 18 ounces unloaded. It uses all the holsters and accessories on the LC9/LC380 market already including night sights making it a very appealing pistol for everyday protection.

Full details and specifications can be found on the Ruger website.